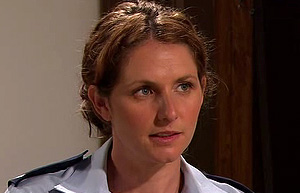 In her first appearance Lara arrested Kane and she popped up at various instances when Police involvement was called for. She really became a character in her own right when paired with Jack Holden. Their friendship and her willingness to cover for him, even at the risk of her own job, saw her become a firm fan favourite.

Blunt and forthright but also fair, Lara was a good police officer, respected by most of the bay but she was more than willing to deviate from the book in order to get things done. She assisted Jack on an unofficial sting to capture Noel Anderson and convinced him to rejoin the Police.

In 2008 Jack informed Ross Buckton that Lara was in charge and soon after we saw her for the first time in a while, heavily pregnant. Earlier that year she had a leaving party to celebrate going on maternity leave and announced Charlie as her successor. She went into labour off screen, on the morning of Jack’s funeral leaving her unable to do a reading.