Tragedy rocks the Sutherland family. Tasha discovers who her mother really is.

> Angela Russell’s surname on Tasha’s birth certificate was ‘Markham’ – this may or may not be her maiden name. She was 25 years old when she gave birth to Tasha on 11/07/1988.

OUTSIDE SURF CLUB
Alf and his search team have returned, and he talks to Macca via his radio, having had no success so far. Kane appears and a further row ensues between he and Seb. Kane doesn’t want to sit around doing nothing, so Alf agrees to let him join the search team – so long as they all agree to work as a team. Seb and Kane hastily agree.
Scott reassures Dani, who is distressed at the thought of her entire family being hurt – and she can do nothing to help.

BEACH HOUSE
Irene tries to convince Flynn that telling Tasha what her mother was will do no good, and that they should simply tell her that her mother’s dead. Flynn isn;t sure – it could backfire if Tasha discovers the lies. The conversation ends as Tasha enters, enquiring about her parentage. They tell her that her father’s name isn’t on the birth certificate, and that her Mum is dead. Tasha is distressed, as she wanted to know who she was, and Flynn’s mobile interrupts them – it’s Alf. As Flynn recieves the latest – no news – Tasha wants to know what is going on. They tell her about the missing Sutherland’s, and as it is obvious that she knows where Max was heading, they press her for information.

OUTSIDE SURF CLUB
Tasha is trying to explain to Alf about the shrine, with Kane keen to get going – it’s worth a try. Tasha agrees to lead them there, and the group pile into the vehicles – Irene insisting that she also go.

MINESHAFT
Max is blaming himself as Kirsty and Jade hysterically try to get to an unresponsive Rhys. Jade’s asthma is worsening, and Kirsty tries to help.

The rescue vehincles continue to make there way towards the mineshaft as Kirsty once again tries to get a response out of Rhys, unable to shift the rocks.
As Tasha directs them to the shrine, Alf realises that they’re heading for the mine.

Jade and Max have both lost consciousness, and a falling rock gashes Kirsty’s leg as she tries to free Rhys. She cries out in pain. 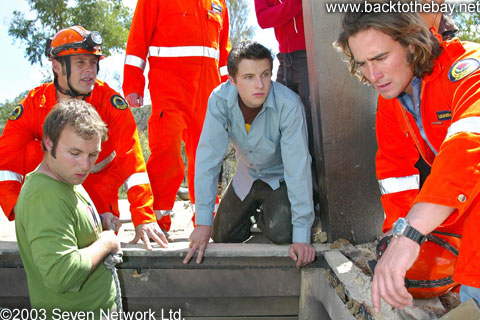 The rescue vehicles arrive on site, and the teams rush over to the entrance to the mine, Kane yelling out for Kirsty. Tasha and Scott realise that the shaft is “all broken” now – someone has been down there. Alf grabs Kane to prevent him from going down, but Kane won’t be stopped – they could be dying. He, Seb and Scott enter the mine, with Scott telling Dani that she will not lose him.

BEACH HOUSE
Irene and Tasha return home – there’s nothing more they can do – and Irene tells Irene that it’s not her fault, as she didn’t even know that the Sutherland’s were missing. As Irene heads for a shower, tasha answers the phone and tells the caller that “he’s not in”, before going to find a pen to take a message. She discovers her birth certificate, and thus the name of her biological mother.

MINESHAFT
Seb, Scott and Kane use their hands to dig as Flynn and a random SES guy look on, with Alf and Dani at the top of the shaft. Kane insists that they ARE getting somewhere, and they HAVE to keep on going. Seb also refuses to wait for the professionals. Alf just hopes that the rescue teams get there in time – they’ve been buried alive for 17 hours, and it would be a miracle if they pull through

MINESHAFT
Kirsty tries to get responses out of Max and Jade, but can’t. Unable to move her injured leg, she drags herself to Rhys

Alf informs the diggers that the rescue teams are on their way, but Kane is still refusing to go anywhere.

Kirsty reaches Rhys, telling him that she is sorry for everything, and that she loves him.

The rescue teams arrive, but Seb and kane insist on staying down there, despite withdrawing from digging. Scott climbs out, and is unable to tell Dani that her family will be alright. The diggers break through. 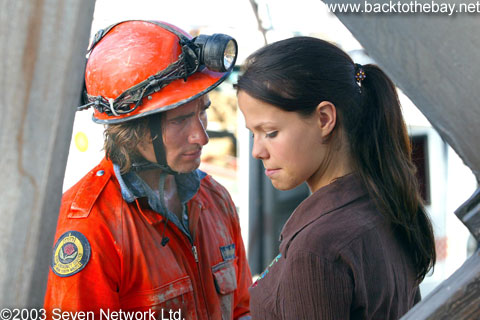 Later, the Sutherland’s are all brought out on stretchers, none of them looking good as Flynn (seemingly the only doctor) checks each of them in turn. Loved ones rally around them, distressed. Kirsty has lost a lot of blood, and Rhys isn’t breathing – they manage to revive him, but things are looking dim. 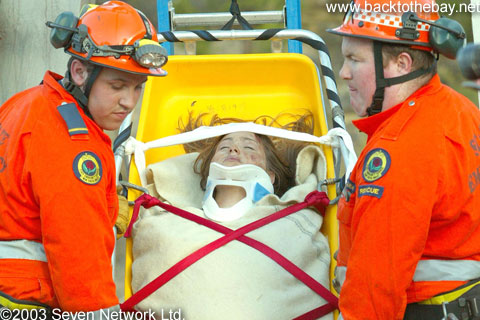 HOSPITAL
Jade is wheeled in, conscious and clutching an oxygen mask. Seb calls out that he loves her as she is taken away from him. Dani reassues Max as he is also taken in, and Kane is still by Kirsty’s side, but Flynn tells him that they need space.
Rhys is still unconscious, and a distressed Dani tries to get Flynn to tell her that he’ll be alright. 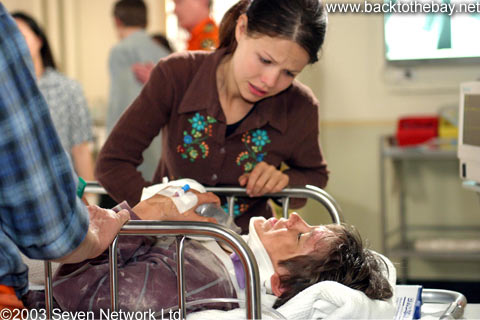 Seb and Kane sit awaiting news and a chance to see them. When Seb reminds him of his threat towards Rhys, Kane insists that he was digging for all of them – what he said at the dance was stupid, and he doesn’t want Kirsty to lose her father. Seb apologises, suggesting that Kane get his damaged and bloody hands looked at, but Kane tells him that it’s not important.

Kirsty is stabilising and Flynn agrees to let Kane have some time with her. As Flynn and the nurses leave he pleads with her to get better, as Scott and Dani walk by the other side of the curtain. Kane tells her that she is his life, and that she HAS to get better.

BEACH HOUSE
Kane arrives home, telling Irene and Tasha that Kirsty is stable, and that Jade and Max are pulling through. Rhys, however, is still not good. His hands are now bandaged up, and Irene goes to get him a drink. He assures Tasha that nothing is her fault, but still can’t believe that everyone thought he’d hurt Kirsty, getting upset when Irene says that she can understand why they thought it, and wondering if he’ll ever be able to escape his past.

HOSPITAL
Scott has managed to get in touch with Beth, and Dani tells him that Jade will be fine, and Max’s ankle is only sprained. As Flynn passes with Rhys, Dani and Scott pull him aside, telling them that Rhys has experienced some brain injuries, and that there is a possibility of permanent brain damange, with the next 24 hours being crucial… 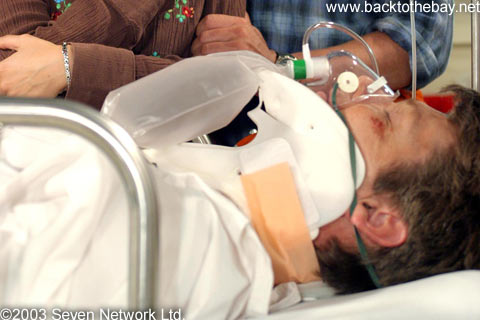