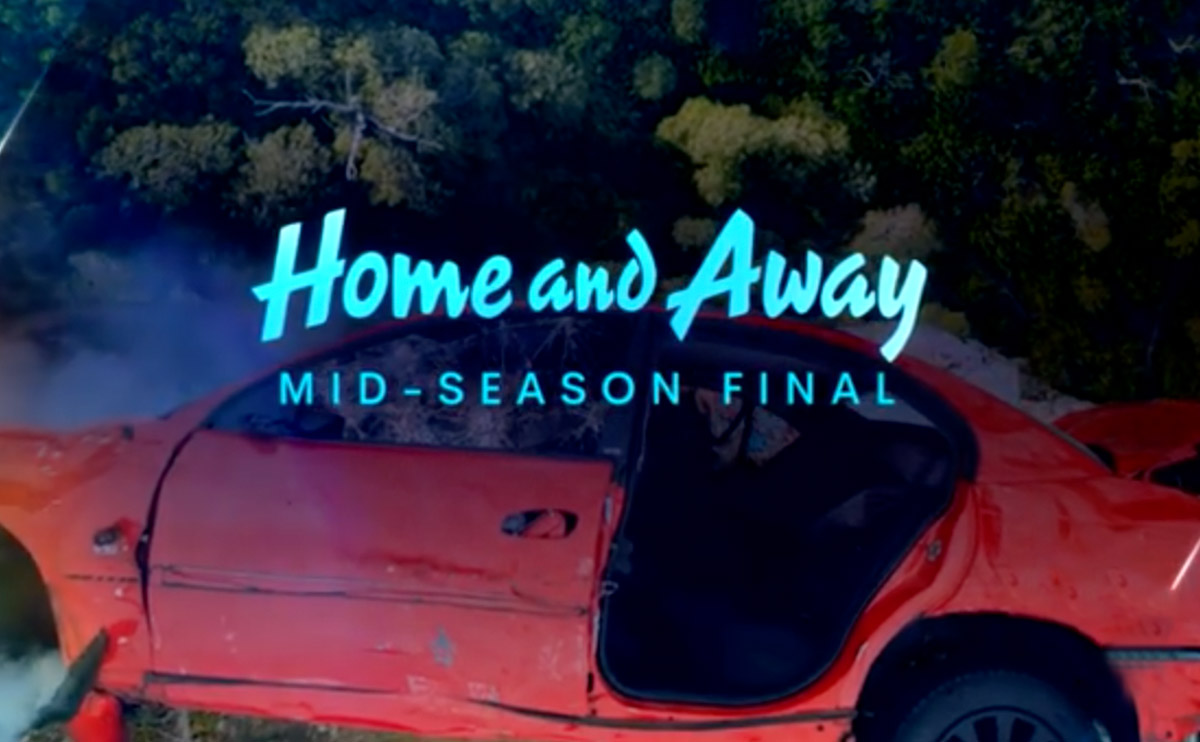 Next week marks the beginning of the Olympics, which as long-term Home and Away fans know means a special mid-season cliffhanger… and this year is no different.

A new promo currently airing on Seven has given us a glimpse of what’s in store in the dramatic episode, airing in Australia next Thursday 22nd July. UK viewers, scroll down to find out when you’ll see the episode.

As the drama ramps up, viewers are set to see two exes share a charged moment, someone pop the question and a car crash that will leave at least one favourite hanging off a cliff! 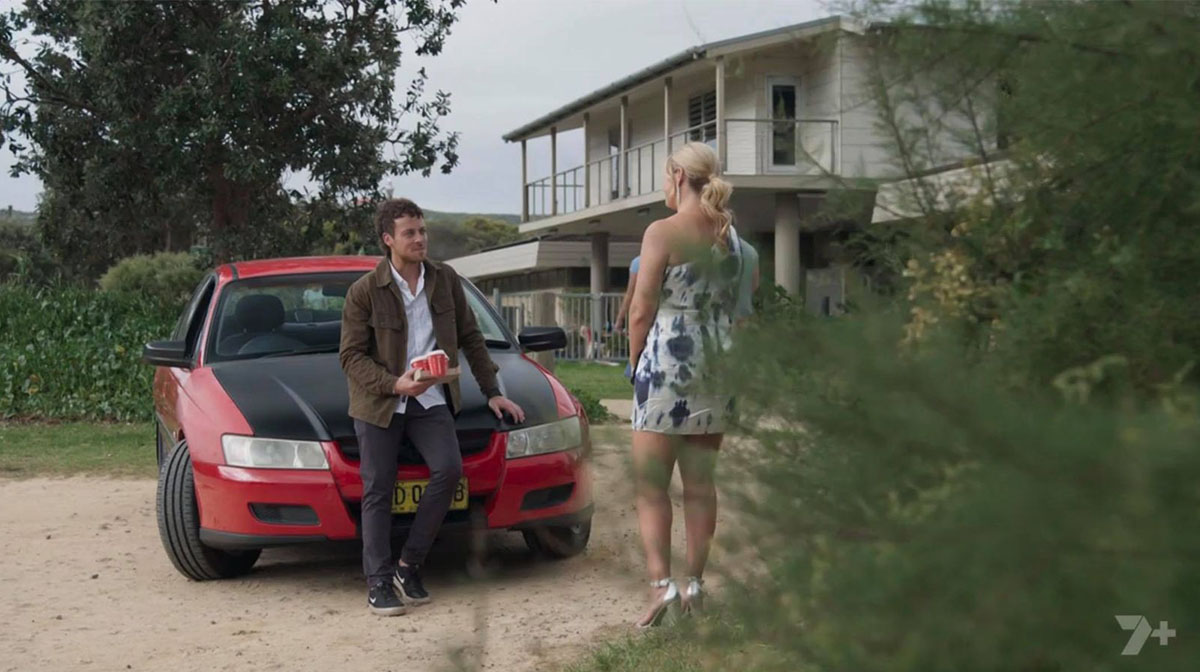 Viewers who watched the episode on 7Plus will note that the promo showed the pair share a charged moment at the event, leaving the question hanging as to whether Ziggy will cheat on Tane with her ex-boyfriend.

However, those who watched live saw a different promo, which you can watch in full below.

It began with Dean’s car driving over a bridge under the words “the mid-season final”. 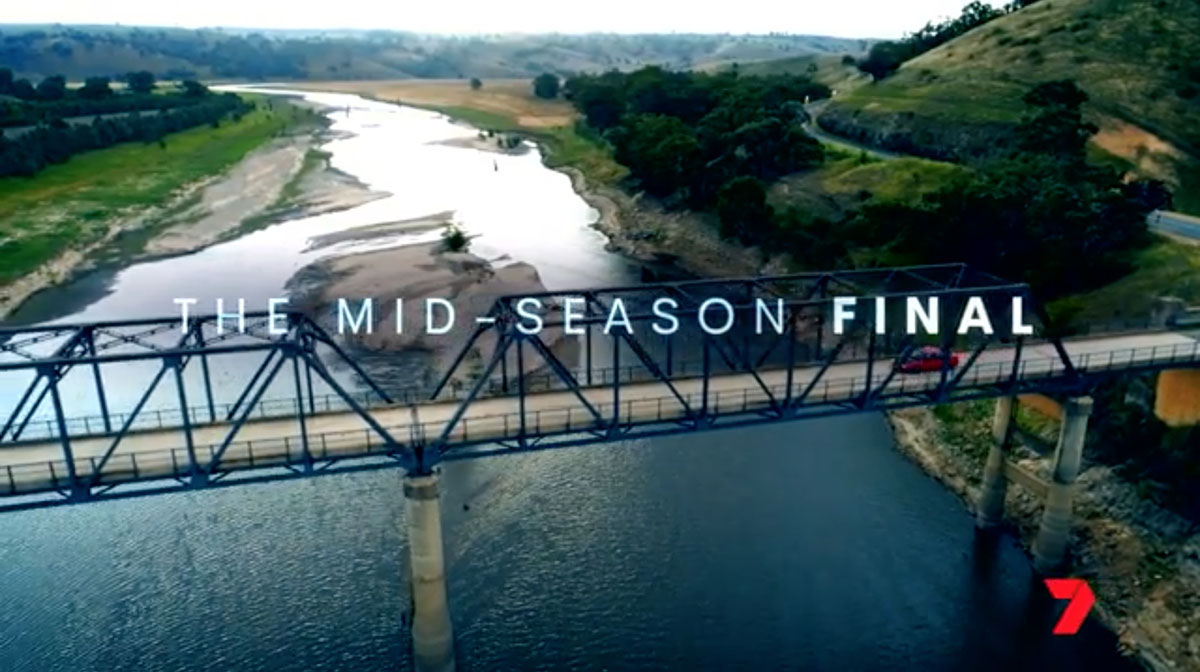 Fading to a scene of Ziggy in the Farm House, the fast-paced ad showed the mechanic on the phone, asking the caller why they weren’t in the bed when she woke up. Is she referring to Tane or Dean?

Next saw Mackenzie (Emily Weir) assuring Ari (Rob Kipa Williams) that he was going to make an amazing father.

His response, one lacking optimism. 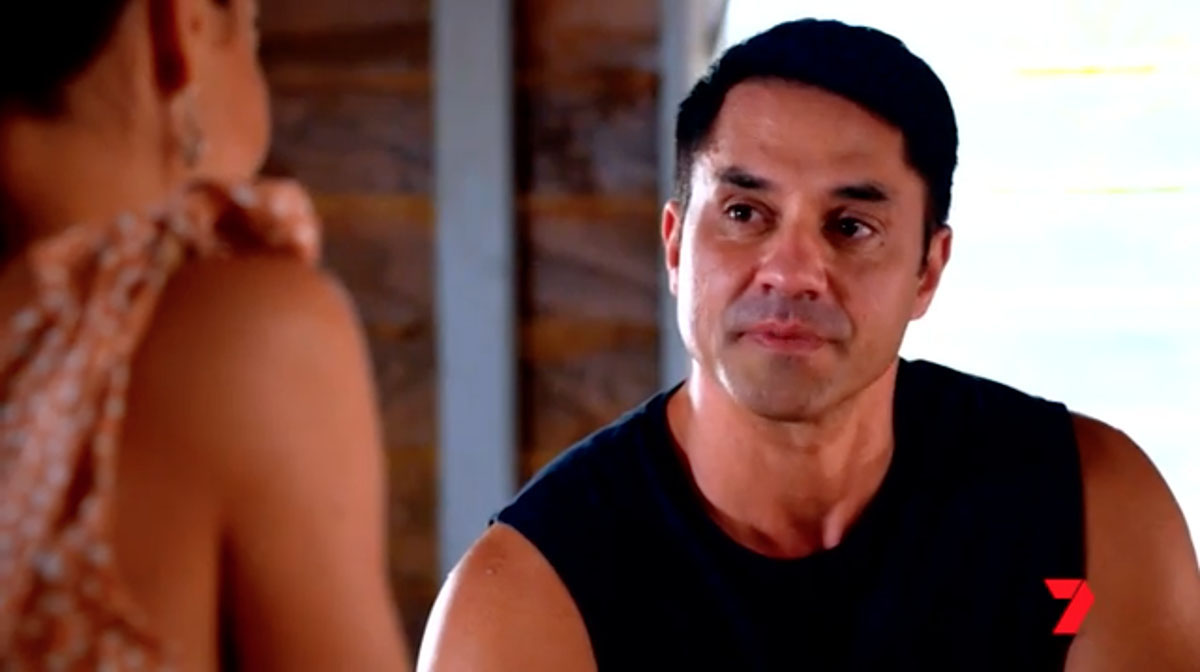 “I hope so,” he doubtingly tells his ex-girlfriend. 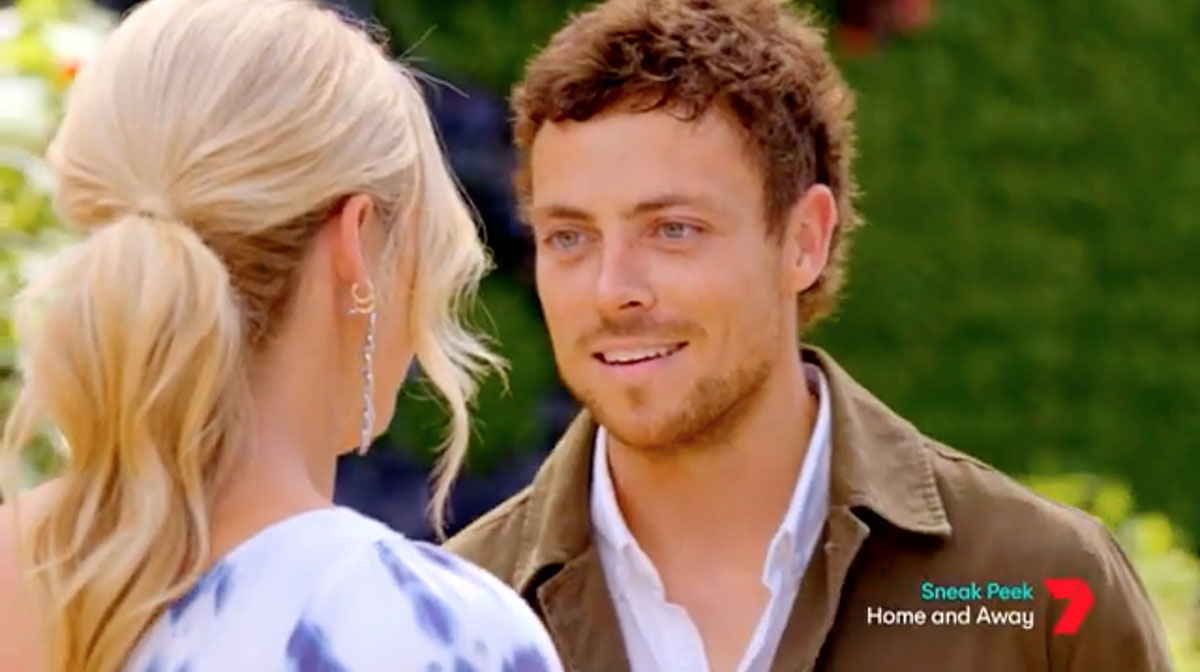 Then, back to Ziggy. This time, she’s at the glamorous event where Dean asks whether the pair should leave. Perplexed, she questions him.

“Come on Zig, you know you want to,” he says, coaxing his ex with him. 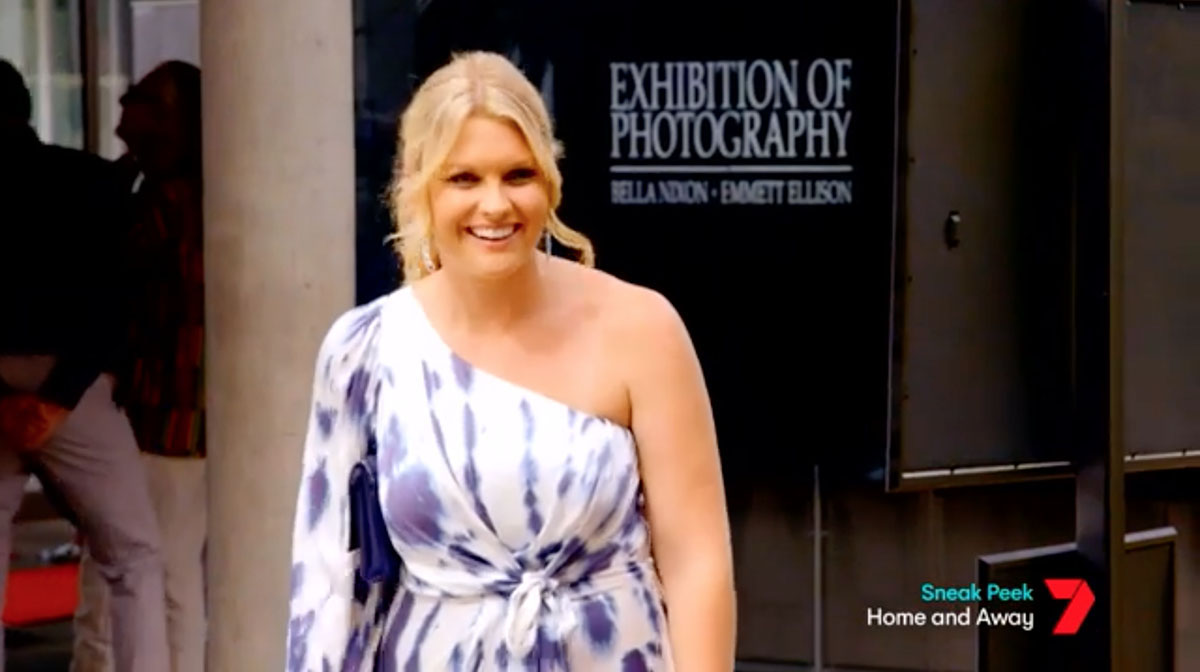 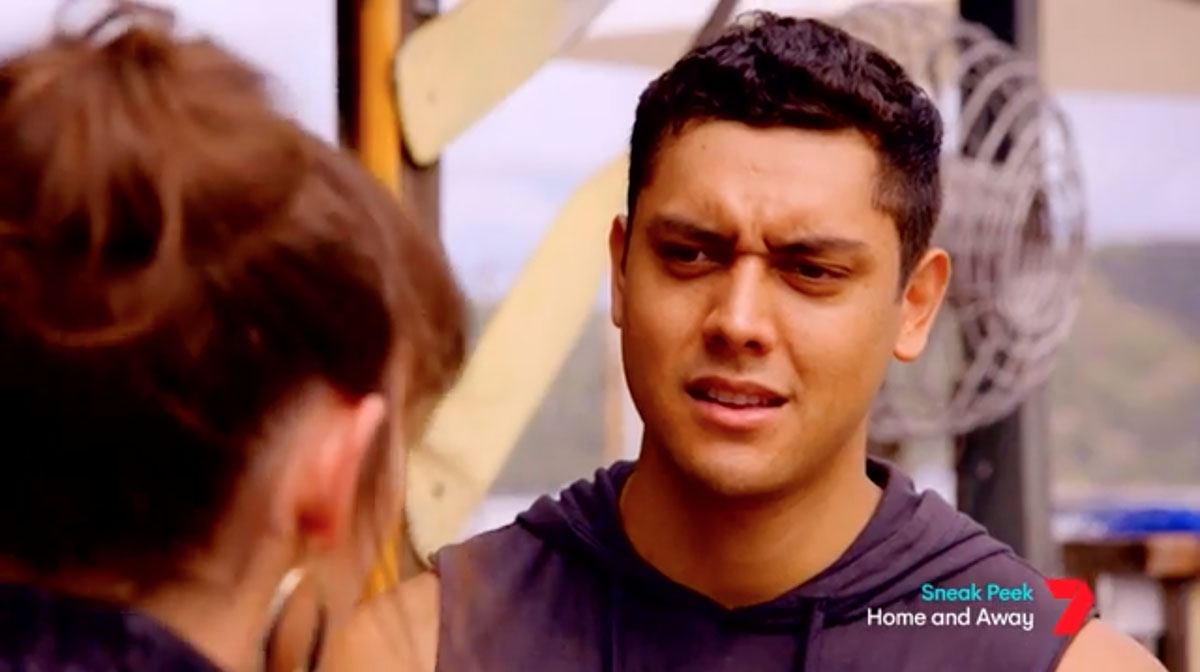 Following this, there’s a flash of Bella and Nikau (Kawakawa Fox-Reo) as he offers to drive her to the city. Dressed up, it’s obvious she is ready to attend the exhibition, but she’s not wanting a bar of his offer. 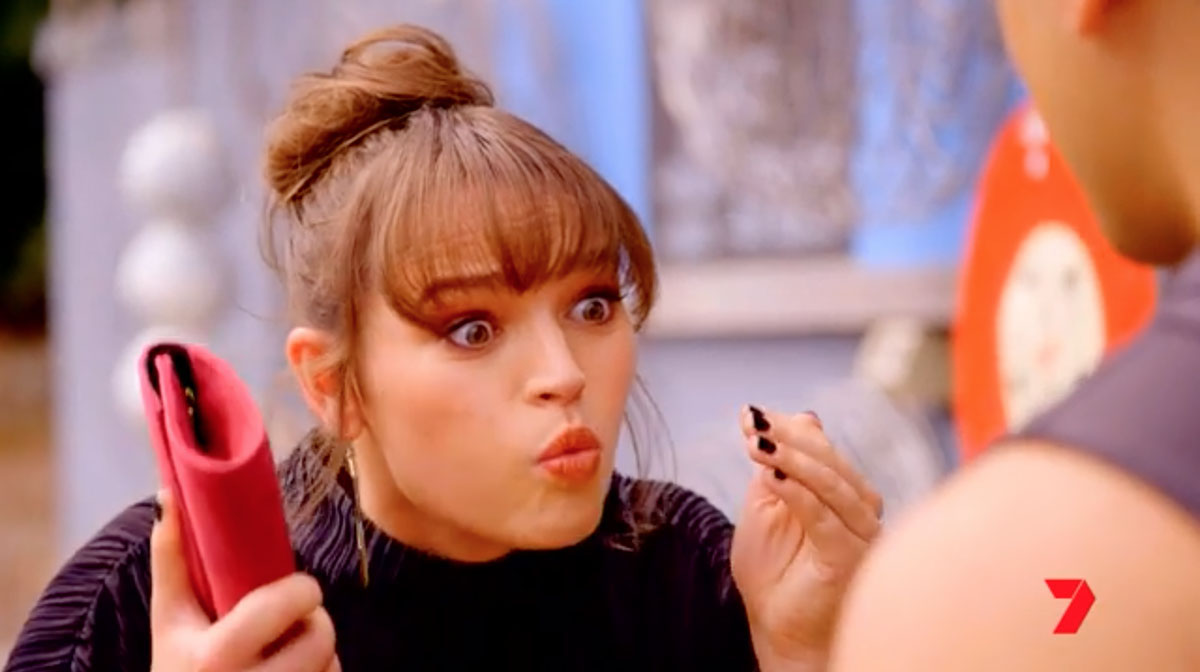 “I don’t want you,” she yells at him, trying to get the message across loud and clear. 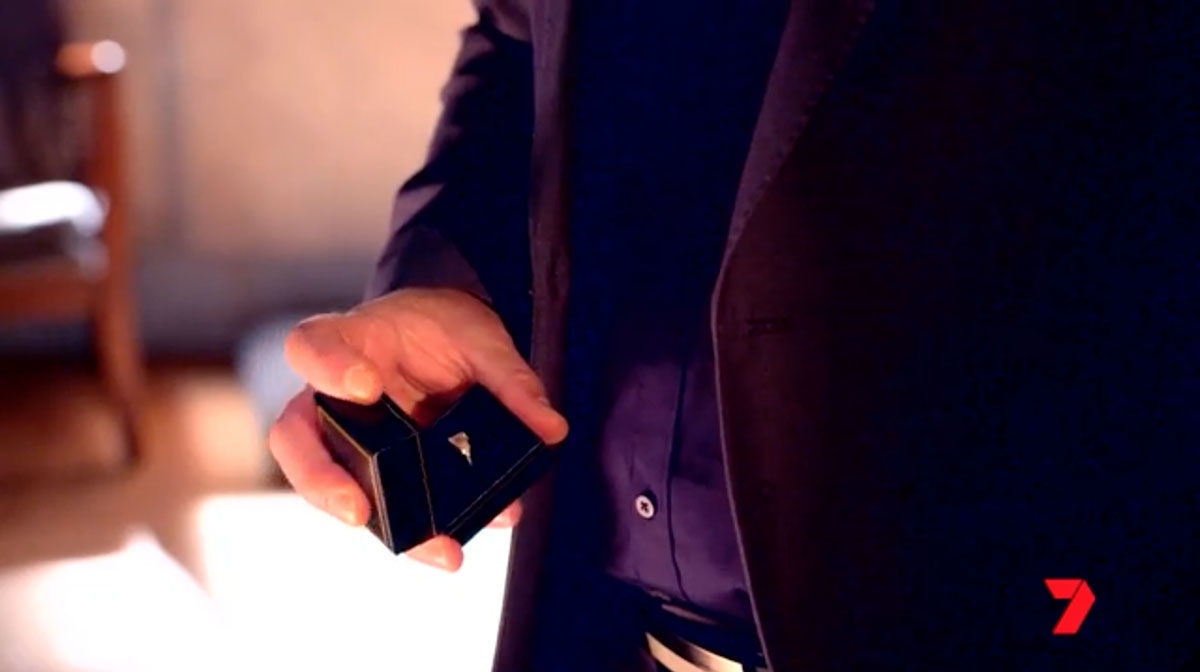 As someone – who looks a lot like Christian (Ditch Davey) – looks at a box with a stunning engagement ring in it, and Tane questions the location of someone on the phone, the promo reaches a climax. 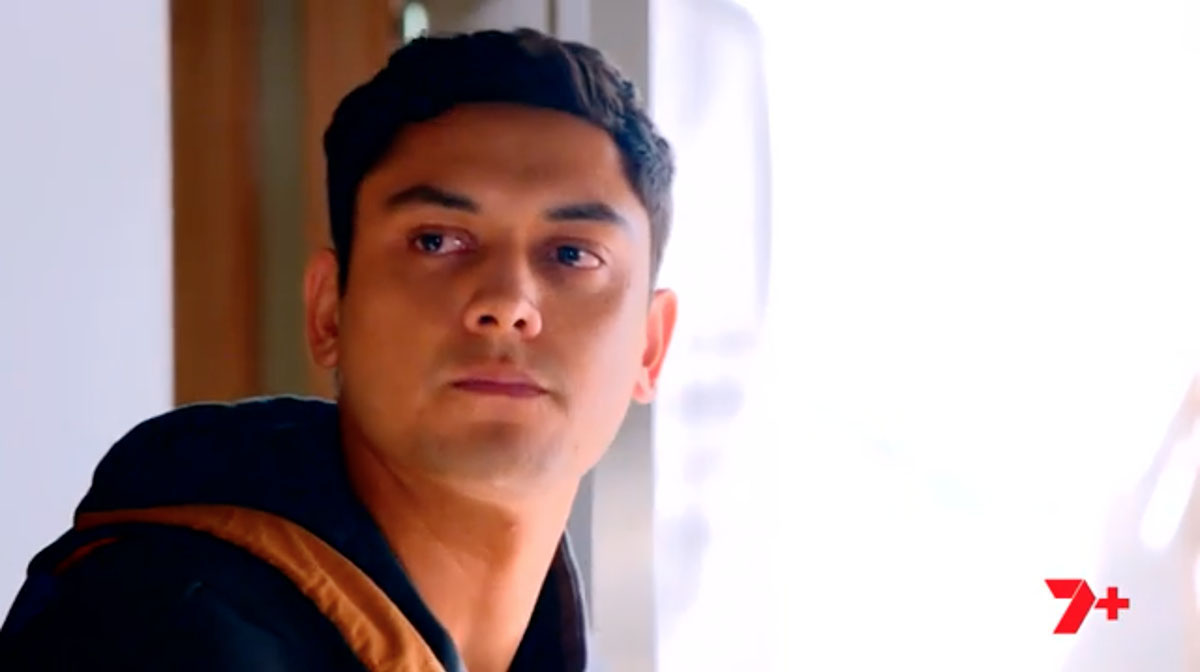 “I’m leaving,” Nikau tells his uncle. However, Ari isn’t having any of it.

“If you walk out that door, don’t you bother coming back,” he barks at his nephew. However, it seems Nikau is set to ignore his uncle’s ultimatum. 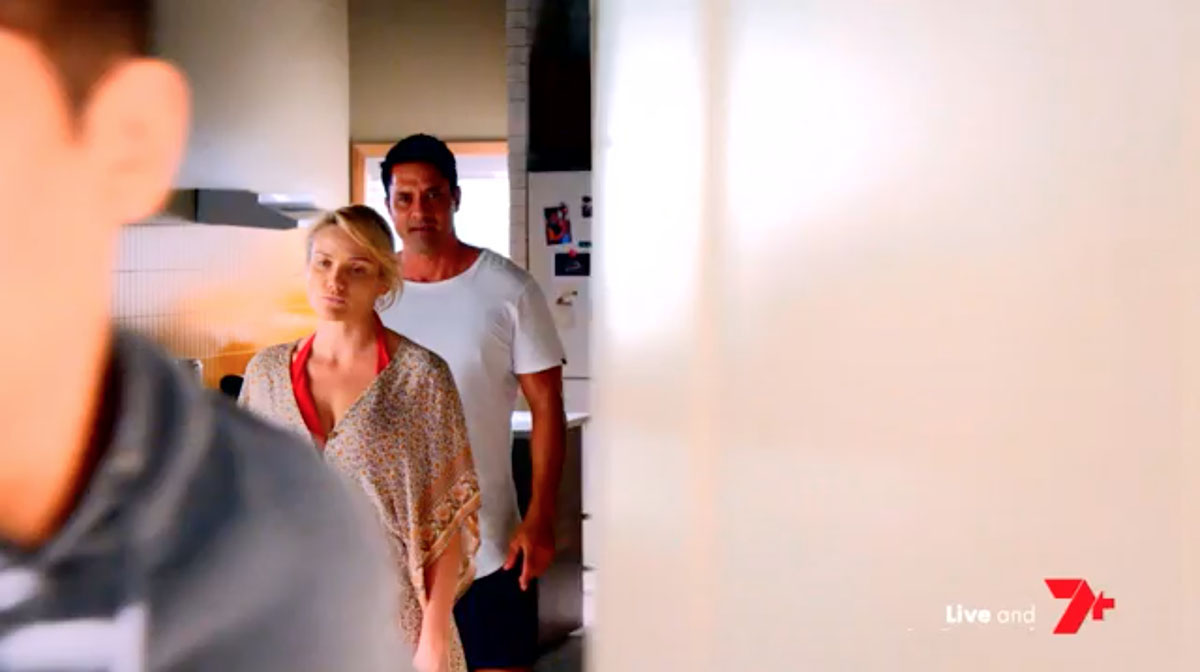 As Mia (Anna Samson) and Ari watch on, Nikau walks out the door, slamming it shut behind him.

Throughout the promo, there’s flashes of a red car – Dean’s – rolling down an embankment. 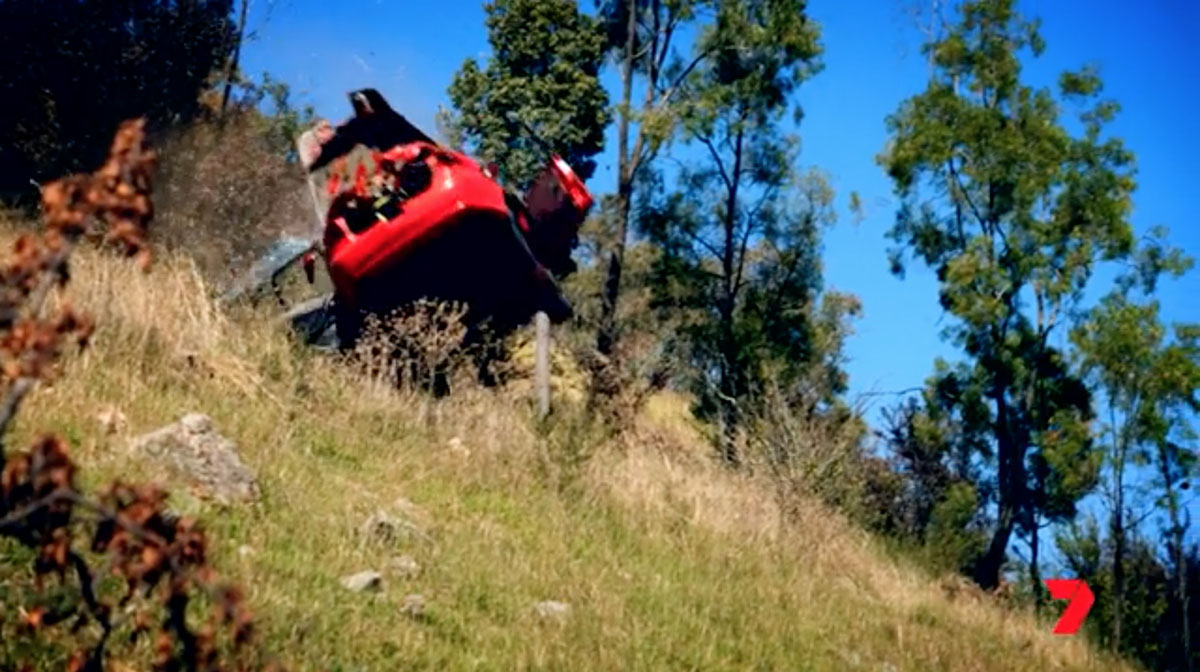 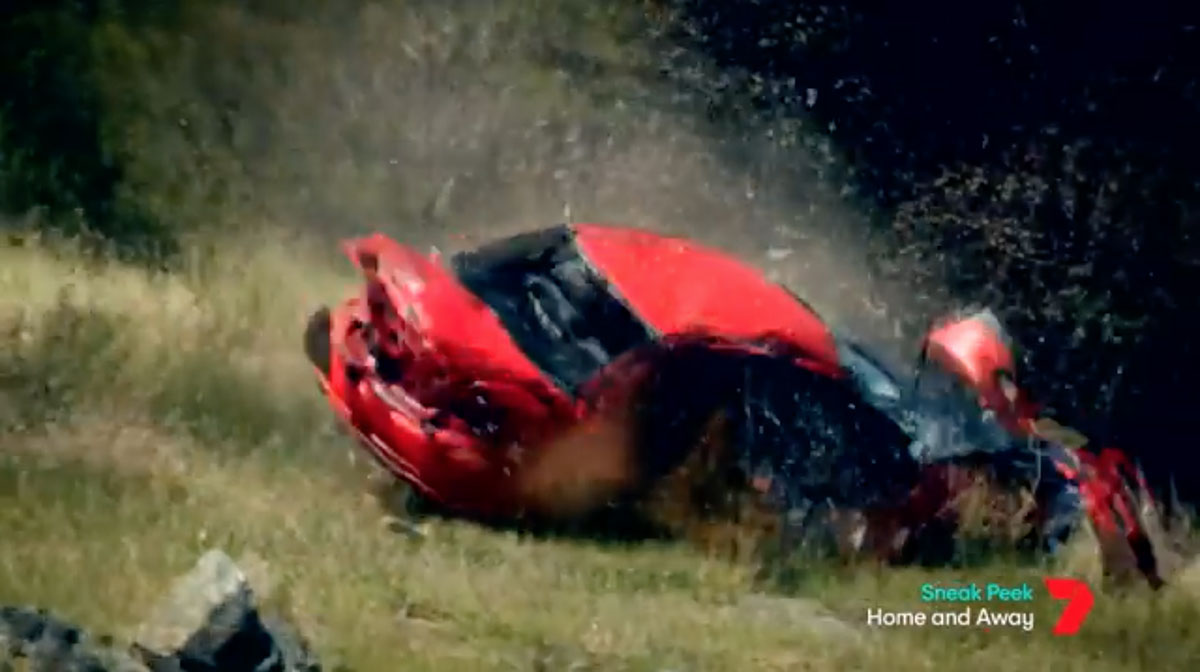 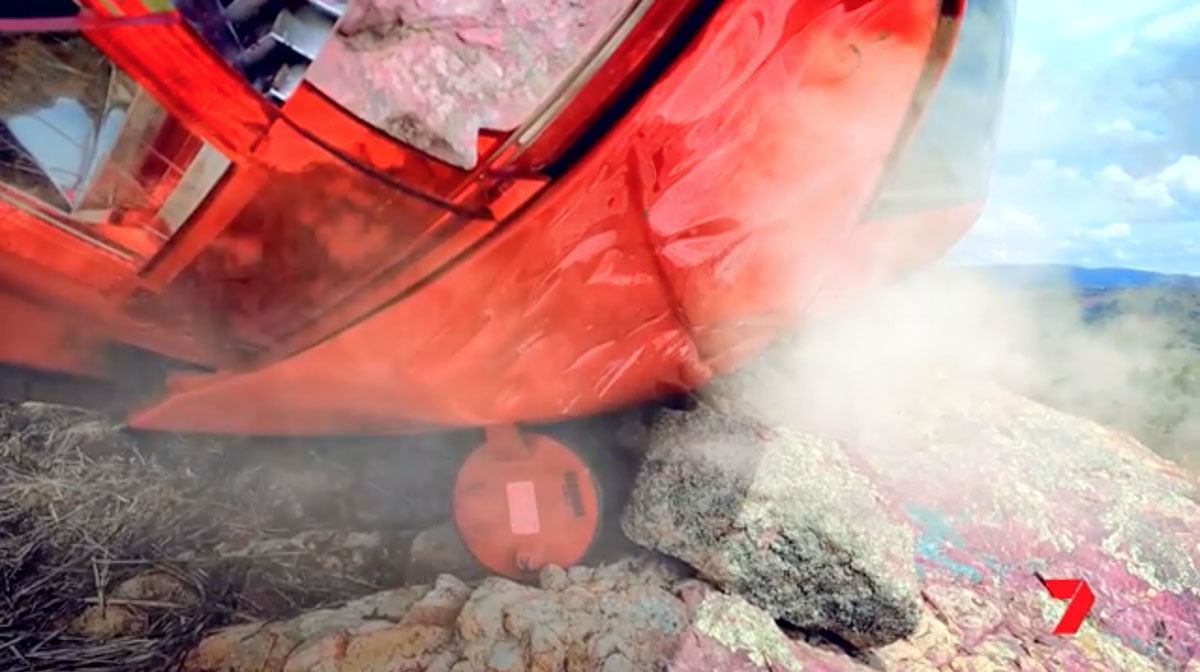 As it finally comes to a rest, cries of fear and calls for help can be heard from both male and female voices.

While it may be Dean’s car that rolls down the hill, with the ambiguity around Nikau’s movements, there is every chance he may take the car and be the victim of the crash. 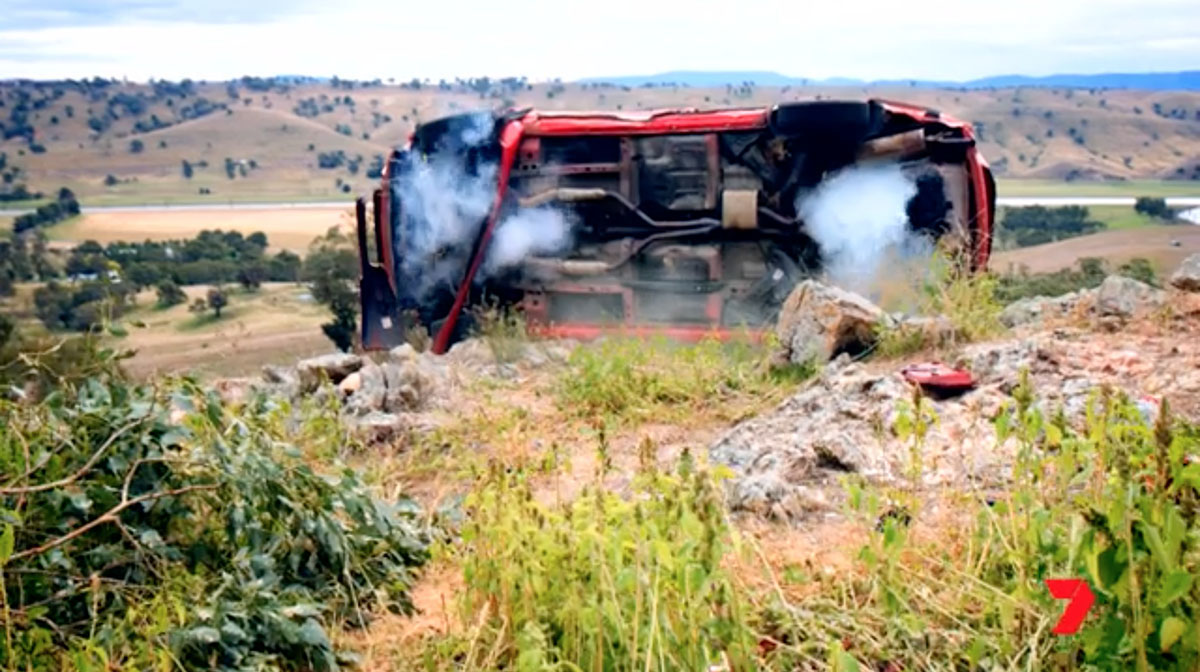 Once the camera pulls back, it is revealed that the car, smashed up and on its side, is on the very edge of a cliff face. One small push, perhaps even a gust of wind, and the car could go toppling over, taking the passengers with it. 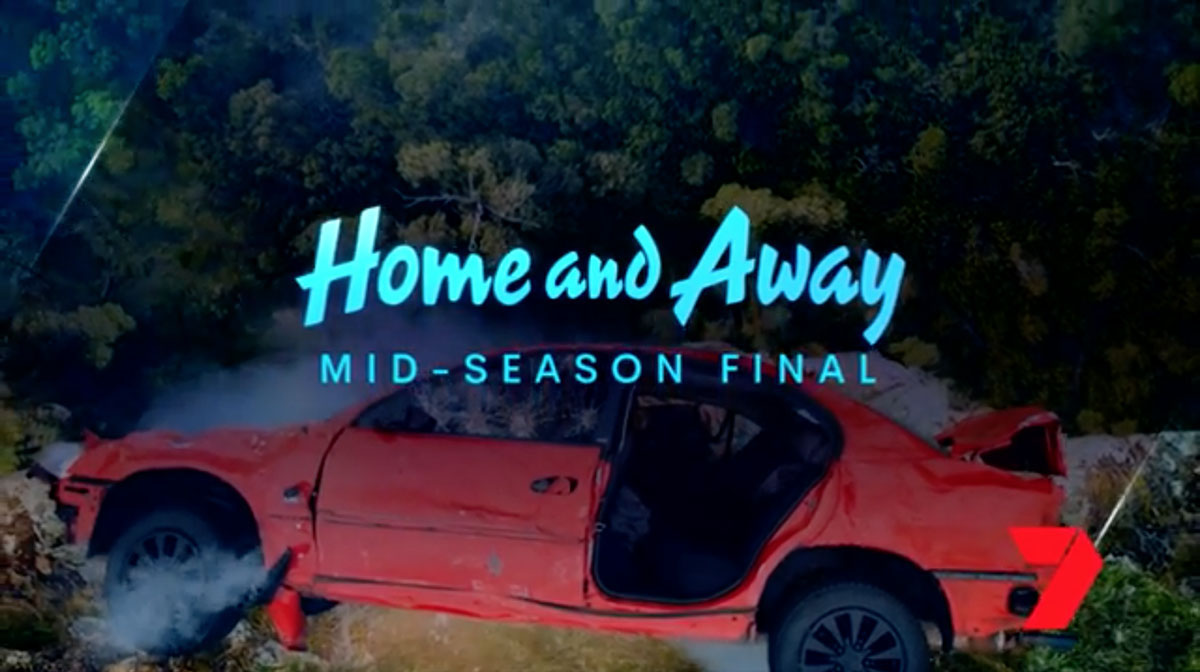 Viewers don’t have to wait long to learn the victims’ identities, with the episode airing in one week’s time on Thursday 22nd July.

If we were to speculate though, we believe the cries for help may be that of Dean and Ziggy.

To back this up, one eagled-eyed viewer pointed out that Dean’s shoes at the end of tonight’s episode are identical to those of the victim. Months ago, a photo was posted on Facebook of the medical response unit that was employed to help out on Home and Away‘s rural shoot, which took place on Wee Jasper Road, just south of Yass, back in March of this year. 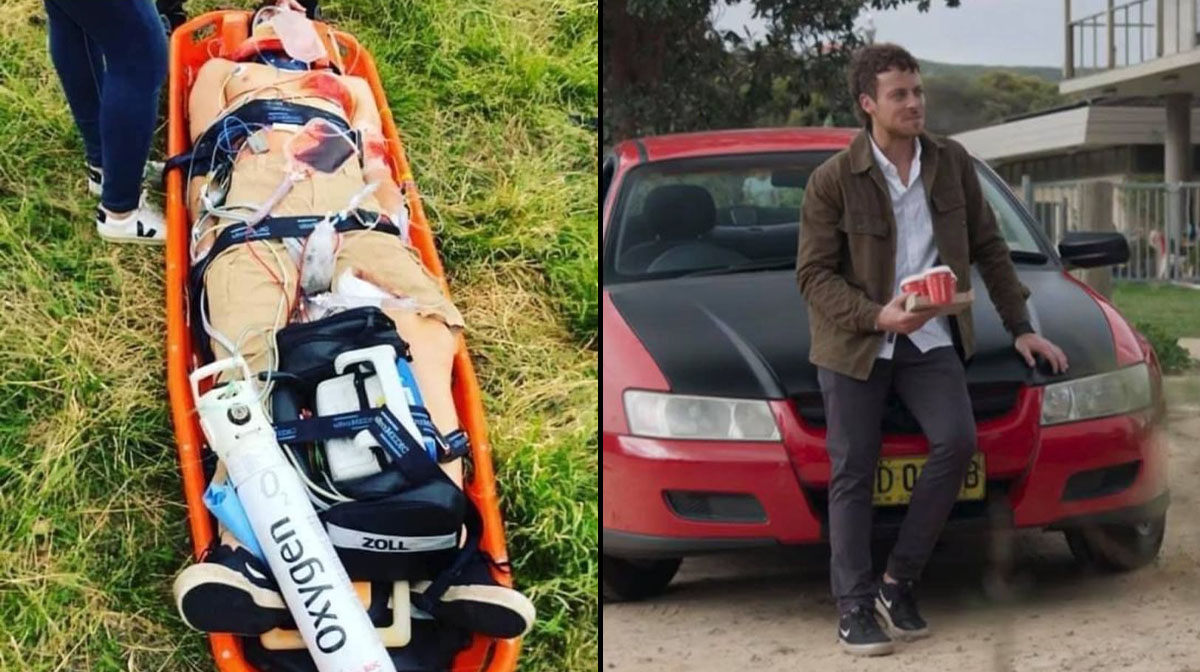 While it looks as though the trousers are different, could the matching shoes be a clue as to one of the crash’s victim?

The literal cliffhanger will air in Australia on Thursday 22nd July, and the series will return after the Olympics on Monday 9th August.

UK viewers will see the final on Friday 10th September, but won’t have to wait long to see the aftermath, with the return episode airing just a few days later on Monday 13th September.

Olympic Cliffhangers of the Past

As we await to see who is in the car, it is the perfect opportunity to take a look back at the Olympic cliffhangers of the past and remember the big events that left us waiting with bated breath.

It is worthwhile to note that there was no cliffhanger in 2012, due to the Olympics airing on a different network. 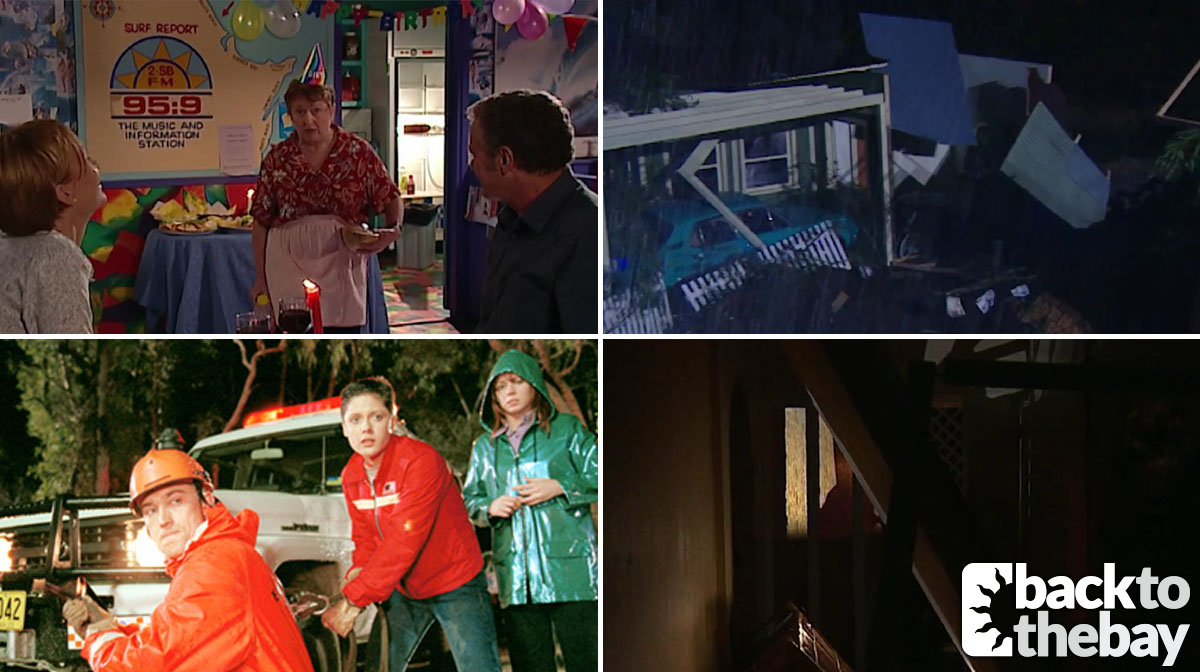 The first of the official mid-season finales saw a week-long storm wreak havoc upon Summer Bay. As the residents of Summer Bay prepared to celebrate Ailsa’s (Judy Nunn) 50th birthday in the Diner, Gypsy’s (Kimberley Cooper) stalker crashed her car. Meanwhile, the Stewart house played victim to a landslide with favourites Ailsa, Jade (Kate Garven) and Duncan (Brendan McKensy) inside. 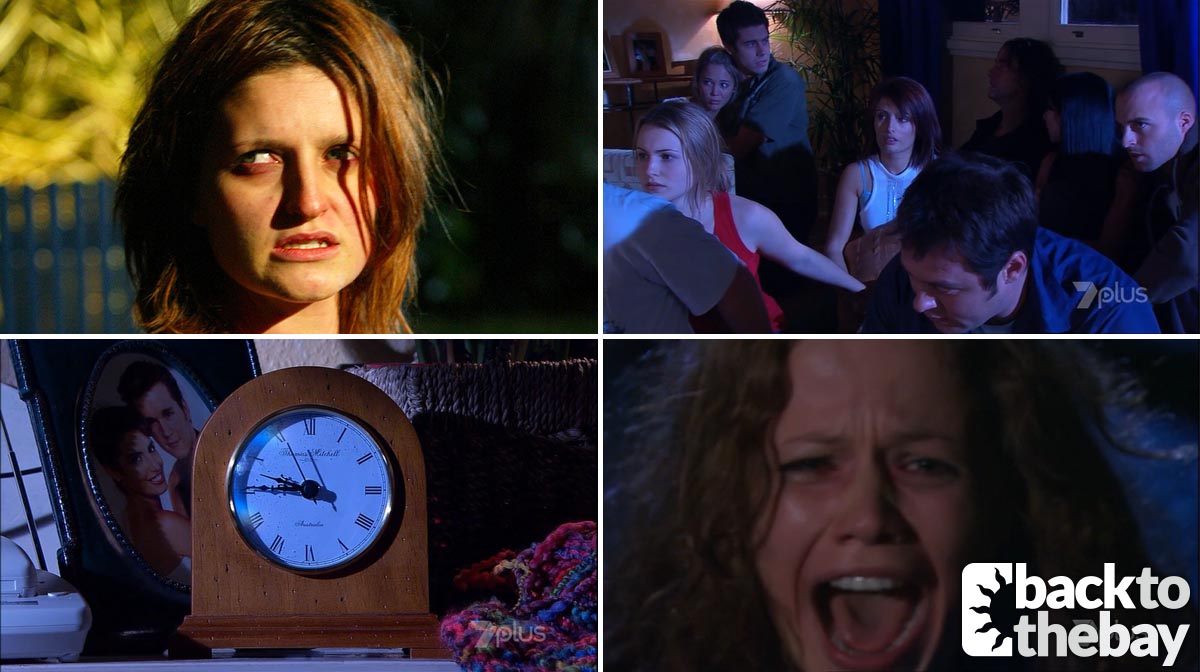 Arguably the most notable of the five Olympic cliffhangers, viewers saw the climax of a months-long story when crazed ice addict Sarah Lewis (Luisa Hastings-Edge) held half of Summer Bay hostage in Leah’s (Ada Nicodemou). After a nail-biting half hour of Sarah’s ominious mutterings, including her infamous ‘tick tock’, two gunshots rang out, etching Dani’s (Tammin Sursok) blood-curdling scream in viewers’ memories and resulting in the death of Noah (Beau Brady). 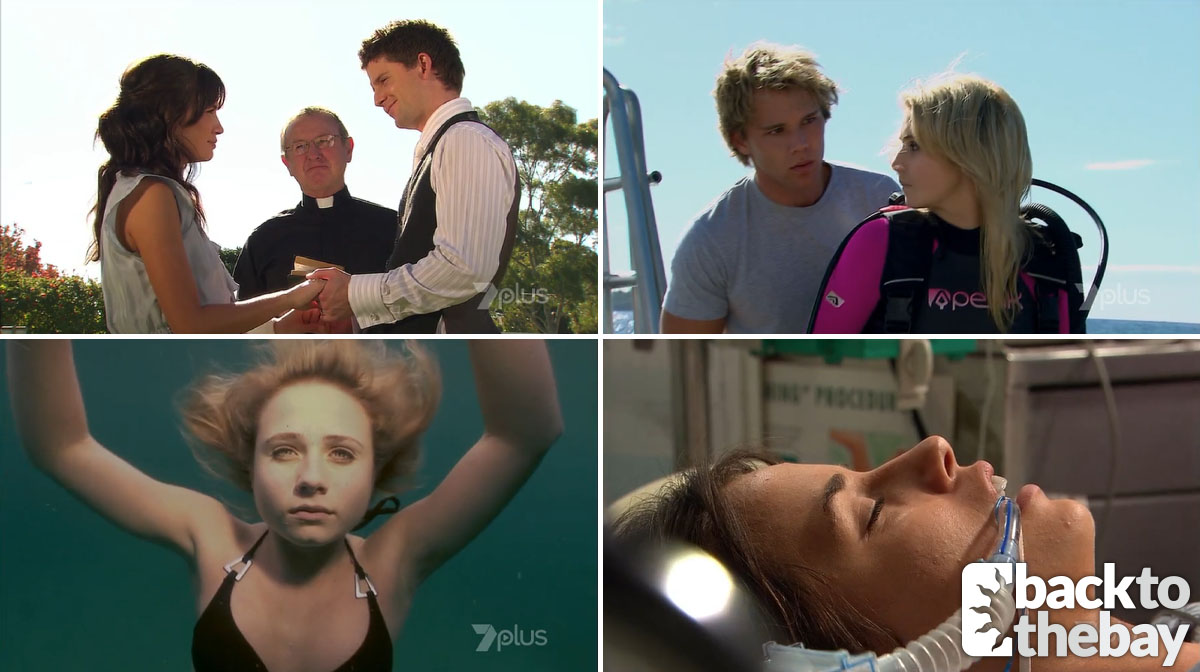 Different to its predecessors, this episode saw multiple stories culminate to climaxes instead of one major cliffhanger. A cancer-striken Martha (Jodi Gordon) collapsed at her wedding to Jack (Paul O’Brien) and hospital staff struggled to revive her. Meanwhile, Elliot (Paul Pantano) took revenge against Roman (Conrad Coleby) by trying to kill his daughter Nicole (Tessa James) and her boyfriend Geoff (Lincoln Lewis). 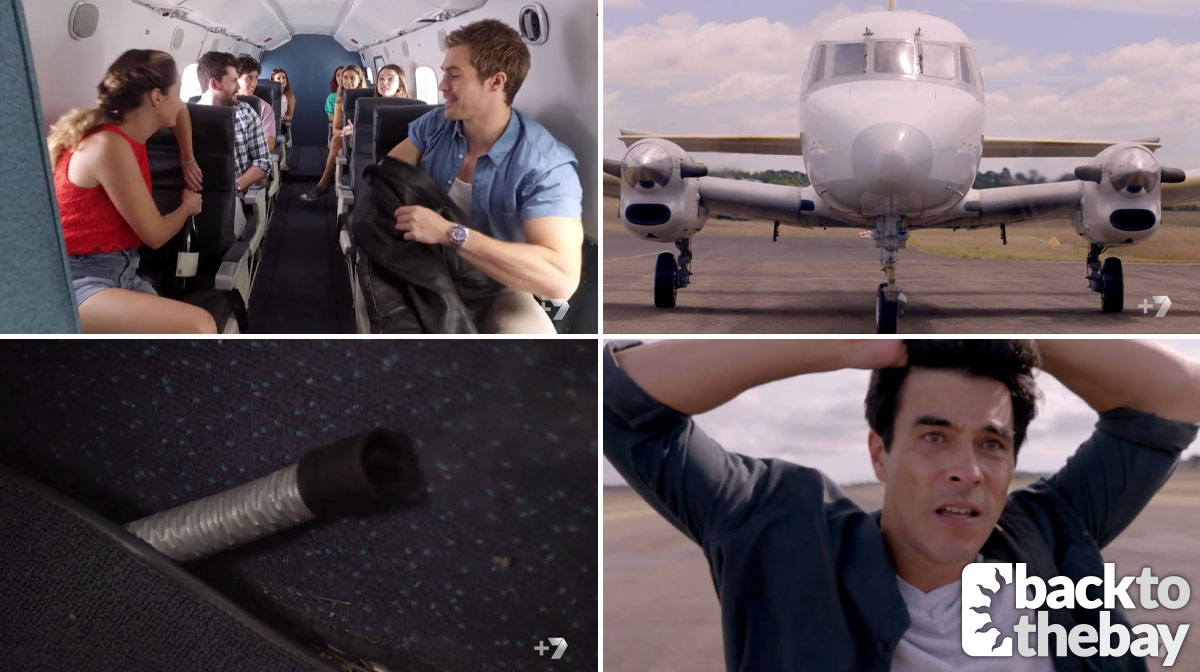 As Tori’s (Penny McNamee) 30th birthday approached, her boyfriend at the time Duncan (now played by Benedict Wall) offered to take her and her loved ones on a joyride in a plane. However, with a drug syndicate after the Morgans, the plane was tampered with. Justin (James Stewart) attempted to chase the plane down on the tarmac but was devastated to realise he was too late. A pipe pumping carbon dioxide into the cabin went unnoticed and as a result, all aboard passed out and the plane crashed. 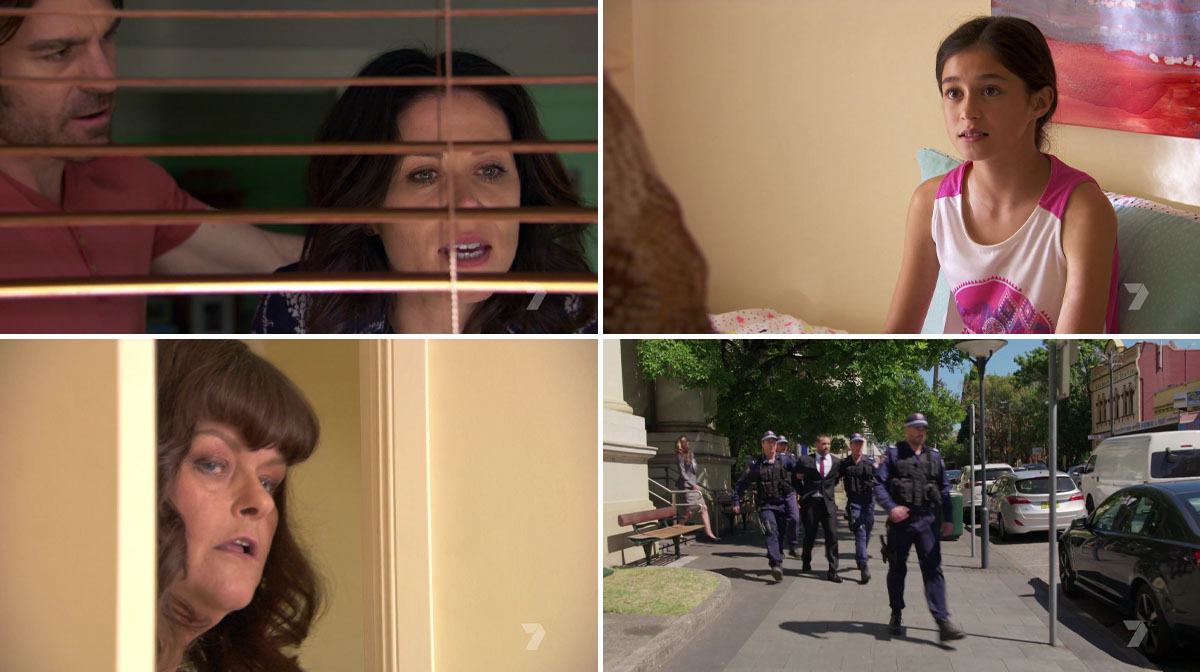 In an unusual move, the series went off air for the Commonwealth Games. The final episode before the break saw Robbo’s (Jake Ryan) trial end with him being whisked away by suits before the end of the trial and Ziggy ponder whether she could be a bone marrow match for her ill mother Maggie (Kestie Morassi). Elsewhere, Justin discovered that his daughter Ava (Grace Thomas) was missing.

Will Ziggy give into her feelings? Justin and Leah get back on track. Will a heartbroken Nikau derail Bella’s exhibition?

Bella’s exhibition finishes in dramatic style. Ziggy and Mackenzie renew their friendship. Chloe has her first shift at the Diner. The Paratas continue to worry about Nikau.

Tane suspects there’s something going on. Ryder and Chloe work out how to repay the loan. Ziggy makes a confession.

Ryder convinces Bella to talk to Nikau. Cash learns the truth about Jasmine’s past. Christian’s plans for Tori begin to unfold.