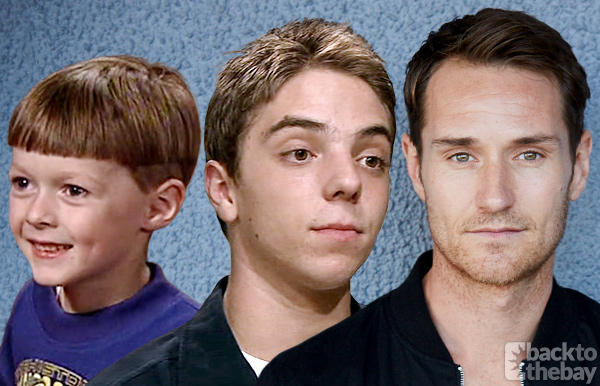 Duncan is the only child of Ailsa and Alf Stewart. Duncan’s been on the show for quite a while and used to play with Christopher while he was still about. Duncan had been a rather minor storyline character for years. On of the most exciting moments before his major accident was finding Justine needles under her bed and having a dangerously close look at them. Duncan’s most outgoing part in 1997 was when having a picnic with Ailsa and Ailsa and discovering a dead Vietnamese body in the shrubs while looking for the non-caught boomerang! He immediately passed on the news to Duncan. Duncan had been into violent computer games at that time and made Aisla worry heaps.

Then in 1998, he followed Will, Sam and Gypsy into the bush and fell down a hole and broke his leg, which required him to be in hospital for ages.

After being released, he turned into a tiny monster. His personality completely changed. Ailsa nearly had a car crash in early 1999 because of being disturbed by Duncan. The driver threatened Ailsa and even turned up at the diner. Then Duncan put a smelly sandwich into Sam’s sports bag and provoke him that much that Sam nearly hit him. He messed around with Gypsy’s and Will’s bike and locked them into the traumatic dungeon thus Gypsy believed that Robert returned in order to get back at her!! One of Duncan’s most abominable and pathetic actions was making Aisla believe Joey wanted to threaten him with a massive kitchen knife. Ailsa’s and Irene’s friendship nearly went to pieces because of Duncan’s impudent and reckless behaviour till the day Alf and Aisla saw his true colours shining through. Duncan told them he was working on a science project along with his mate Jack whilst they only planned to make a bomb they downloaded material off the net for. Once they nearly got caught and slimebag Duncan even talked into Beck using the computer beyond official hours. All interesting and dangerous scenes were cut on ITV, also the scene were Duncan told Jack to verify the ignition of the bomb when having a malfunction and then a moment of carelessness, Jack got his leg injured. Ailsa discovered this while having a delicious meal . She picked up a fallen to the floor fork and noticed the uncanny wound on Jack lower part of his leg but Duncan told her he was having a bike accident. He never showed his project to his parents and Ailsa, after made believe it was due for the very day, went to school with it not knowing about the dangerous impact she was carrying to learn there wasn’t any project. Just as Ailsa wanted to talk to Duncan bout this “white lie” Alf was about to open the returned box and this nearly blew his head off. Alf had to go to the hospital to get his arm treated still believing this dangerous rubbish was destined to be a school project but was enlightened by Aisla. While having a lecture to Duncan, Duncan only listened to his inner voice but nevertheless the whole family ended up with sort of intermediate session led by Natalie Nash. Duncan talked bout the feeling of not being loved when sojourning at the hospital and they came to terms by signing sort of contract of mutual respect.

Alf broke it several times by shouting at Duncan but Duncan on his behalf tried to tease Alf to the utmost by refusing to do small favours as for the household.

Duncan became involved with the local Christian youth group. He started attending because he had a crush on Hope in it, but it’s also caused him to seriously examine his behaviour. After kissing her, dull Hope dumped the poor bloke for good.

Duncan’s most traumatic experience ever was dropping a tape in the car and Aisla bending down in order to pick it up. The car got out of control and they splashed into a nearby lake at high speed. Duncan got himself out of the sinking car and cried for help. Travis managed to get Aisla out of the car but too late, she’d already fallen into a coma and was said to never wake up again but Duncan had never lost faith in her whilst Alf did and being at the point of no return, Duncan noticed a slight move of Ailsa and told them not to make to respirator stop.

Ailsa became the unbelievable miracle and woke up again but swore to get back at Alf because of his heartless behaviour.

While sojourning at hospital Duncan was keen on trying the wind surfer on his own although being told of not doing do for no one had the time to keep an eye on him. Duncan fell off the board and got a minor injury and was incapable to save himself from drowning. Mitch who happened to be in the proximity managed to save him in the utmost tick and to calm him down as well.

Duncan offered Mitch heaps of (fast) food in return at his place till Alf discovered this stowaway under the kitchen table. Mitch was allowed to move in and Duncan and Mitch became close mates in no time. Mitch even trusted him his background in order to help him out of this emotional mess..

Duncan latest traumatic ordeal was being abducted by Robert Perez and his nuts and dire girl friend in late 1999 because of having got hold of his hidden money belonging to the Nash family. This whole thing nearly ended in tragedy.

Duncan happened to get to know young Liang, offspring of one of the victims of the boat people hailing from China. Since her English was very broken young Duncan had communications problems but managed to get through to her by using sort of sign language. Poor orphan Liang had nowhere to go thus Duncan offered her shelter at his mother’s Diner. The main reason for this was because of Liang feeling hot and coughing all the time. But the whole thing backfired since both got caught in the act and Duncan had to find a new hideaway, the shed nearby the beach. Ailsa became really terrified when this typhoid scare came up and Will also had this mysterious rash nobody knew what caused it thus she decided to get rid of all the food in the Diner but to late since the health inspector in charge close down the whole joint.

Meanwhile, Duncan was desperately looking for Liang who vanished after asking Duncan for some water to drink. Duncan was the local hero since Liang broke down in the woods and he managed to get hold of Lance Smart to bring her back home…

Duncan was very lucky since Liang didn’t suffer of typhoid but malaria and thus the Diner’s re-opening was smooth sailing.

Duncan was also pretty much left to his own devices since Alf was terrified by learning that his sister Celia was missing and headed almost on the spot to Darressalam.

Edward tried to lighten him up by telling him that these “terrorists” often only fought for their rights and were hardly violent and that Duncan could send them sort of letter, too

But Ailsa told him to restrain from telling such rubbish and even tried to split their friendship but Edward managed to make it up to her and even evoked Duncan’s interests for literature like LORD OF THE FLIES and ANIMAL FARM.