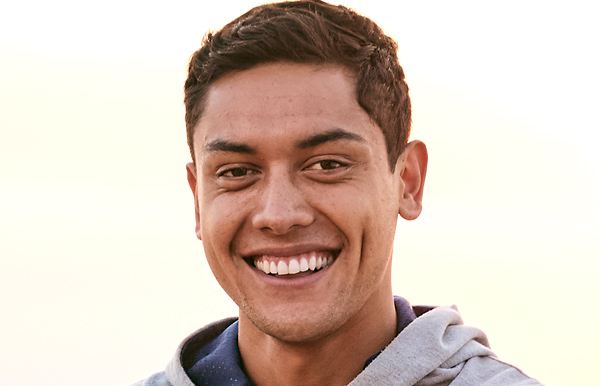 Nikau came to town with his uncle Ari and mother Gemma. He broke up an argument between Ryder and Jade, seeing Ryder as the aggressor. When Ryder told him Jade was trouble and called him an idiot, Nikau punched him. Nikau’s father had died recently and he objected to Ari, his father’s younger brother, acting like a replacement father figure. He reluctantly joined his family for lunch with Marilyn, who had been held hostage with Ari, but was dismissive of her referring to Ari as a hero. He continued to spend time with Jade, spending a night with her rather than going back to the motel where his family was staying, but became suspicious when she was confrontational towards Ryder and his family despite claiming he had videoed them having sex and posted it online. His suspicion increased when he saw her stealing from Salt and being rude to Gemma. Jade tried to seduce him in the store room but Nikau realised she was filming them and took her phone. He took it to Ryder, showing him it contained similar videos of several guys, and ended up being invited to stay for Alf and Martha’s wedding reception while Jade was thrown out. Ryder convinced him to make a statement to Colby, although this caused him to clash with Ari and call his other uncle, Tane, who was still living in the city.

He relied on food Gemma gave him while working at the Diner and the family were evicted from the motel. After spending the night in the car and washing his clothes in the public shower, Nikau was offered work at the bait shop by Roo while Marilyn gave them a place to stay. Nikau helped convince Roo to let Ari stay in a caravan on credit. He began spending time with Ryder and Bella, but John threw them out of the surf club and Dean threw them out of their flat. He confided in them about the death of his father, who had been killed carrying out an armed robbery in which an innocent woman had been killed. He convinced Bella to forget about getting her HSC and take a photography course at TAFE instead.

Ryder warned him to be careful around Bella, telling him she had once been groomed online. Nikau initially avoided her but ended up taking her to the city to see Tane after an argument with Ari and Gemma, telling Tane he didn’t want to go back, although he ended up leaving rapidly the next morning after Bella panicked about staying out all night. He worried about Ari dating Mackenzie, local police officer Colby’s ex. Bella blurted out to him that she liked him, then ran off. Ryder managed to get the two of them together and they shared their first kiss. They hustled two teens at Salt to get money for a date.

Bella then summoned him to her flat and told him she wanted to sleep with him. However, when they attempted it, Bella freaked out and locked herself in her room. Nikau went to get Ryder but panicked and ran off when Ryder called Colby. After Ryder told him Bella had cut herself and blamed him for mishandling her, Nikau tried to skip town but Gemma insisted he go to the hospital to check on her. Colby accepted he’d done nothing wrong but wouldn’t let him see her, and he only managed a brief word with her before she was sent away to a therapy centre next day. He ended up arguing with Ari and Gemma and tried to go and live with Tane again. In the end, it was John that stepped in and got him and Ryder to make up.

Frustrated at Ari putting pressure on him to find work, Nikau went back to Tane’s with Ryder in tow, insisting if he couldn’t stay there he’d go somewhere else. Tane let him stay the night, then went back to Summer Bay with him. Nikau pressured Marilyn into letting Tane spend the night on their sofa and refused to take the labouring job Ari had arranged for him. He was delighted when Tane leased a house for the family in Summer Bay but unhappy when Gemma invited Ben to their hangi. He was hostile on seeing them together in Salt and, after Gemma stayed out all night with him, got into an argument with her, tried to warn Ben off and even told Ziggy to keep Ben away from his family.

He advised Ryder over making memories with his dying father Evan, but was angry when Bella returned from therapy and told him she wasn’t in the right place for a relationship. He lost his temper with Alf, who had returned to the bait shop, and quit his job, then turned Alf down when he offered to rehire him, confronted Ben and Gemma in front of Maggie, and finally stormed out of the house following an argument with Gemma. He nearly ran away and had to be stopped by Tane. Ari helped him get his job back but he became increasingly panicky as Colby pursued the Paratas for a break-in at the Diner. When Bella told him Colby intended to put him and his uncles in a line-up, he decided to skip town. After failing to catch a bus, he stole Tori’s car, only to find Grace in the back seat. He called Tane, who left Grace on the Morgans’ doorstep while the car was wiped and abandoned. He refused to say anything when Colby questioned him but he and his uncles were forced to stay in the country when Gemma took Mikaere’s ashes home, since Colby had put a block on their passports. He was comforted by Bella before joining the others in a memorial haka on the beach.

With Tane also away and Ari working, Nikau was left isolated. Bella convinced him to get out and that the town weren’t against his family, with him again being trusted to look after the bait shop with Alf away. He and Bella kissed and reunited although they had to deal with Colby’s opposition and Bella not wanting a repeat of last time. When Ari and Tane teased him that his idea of a romantic date was making Bella soup, he asked Ryder for help and Ryder suggested a boat trip and picnic, but both Nikau and Bella quickly concluded it wasn’t their thing.

Nikau avoided Bella’s flat to keep away from Colby, who made him feel unwelcome, but Colby eventually accepted Nikau cared about Bella and they made their peace. He realised that Tane liked Mackenzie and talked him out of skipping town, then supported Ryder over his father’s death and Bella when her father was found in a shallow grave, only for Bella to admit that she knew Colby had killed Ross and was going to run away rather than risk giving him away to the police. Nikau ran away with her, taking the money Tane had hidden in their shed to buy a plane ticket. They bought an old ute and drove off into the bush but Nikau was uncertain about never seeing his family again. They slept together but, with their car battery dead, Nikau insisted on going for help. Instead, he ran into Ari, Tane and Mackenzie, who had come after the pair. He took them to where he’d left Bella but found her gone. After a few days fruitless searching, he managed to get Bella to come back by leaving her a phone message wondering if she’d run off because of them sleeping together. Although they returned to Summer Bay together, he was unhappy about her leaving him and told her he needed space. However, when Alf sacked him for abandoning his job only to quickly reinstate him after Bella put in a good word for him, they made up.

He continued to support Bella when she worried about Colby’s affair with Taylor, the wife of Angelo who was leading the investigation into Ross’ murder, and informed Colby when Angelo questioned Bella about her leaving town. With Colby refusing to listen to anyone about the affair, Nikau invited Bella to move in with him. She did so for one night but ultimately decided she couldn’t leave Colby. Nikau became exasperated by Bella’s increasingly desperate attempts to break up Colby and Taylor, resulting in Bella ending their relationship. Ryder and Jasmine locked them in the gym together until they sorted things out.

He then learned Gemma was staying in New Zealand and wanted him to join her. He asked Colby about getting his travel ban lifted and was given another reason to go when Tane confided in him that he’d got on the wrong side of some drug dealers who were threatening his family. Nikau asked Bella to go with him but she was reluctant to leave Colby. However, she changed her mind and agreed to go when Colby refused to listen to anyone about the affair. Colby threatened to stop Nikau leaving the country again and Nikau retaliated by revealing he knew about Colby killing Ross. Nikau helped his uncles out when the drug dealers turned up at the house looking for Tane but the move was delayed when Colby was arrested. Dean accused Nikau of talking to the police and he and Bella went to stay with Ziggy and Mackenzie. Nikau again insisted on standing by his uncles but was scared when a car drove at him as a warning. He was unhappy that Ari and Tane did a job for the dealers without telling him and supported Bella when Colby was jailed. With Ari and Tane being blackmailed to do an armed robbery, they and Bella convinced Nikau to go to New Zealand. He kept in touch with Bella by video call.