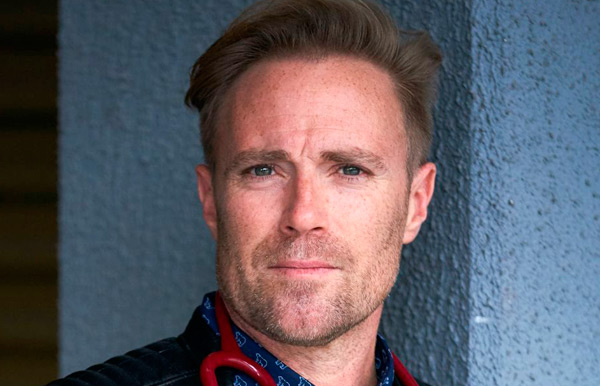 Christian was first mentioned by Tori Morgan as one of the neurosurgeons she contacted to help her brother Justin, after he learnt he had a cavernoma. He was described as one of the best. When Tori met him at the hospital, she found him with his feet on the desk, talking obnoxiously loud on the phone. After realising who he was, Tori introduced herself. He was quick to convince Justin to have the surgery when he was in doubt. Some days later, he operated on Justin. He was forced to get Tori to make a decision during the surgery, regarding whether to close Justin or not. After she decided to cease the surgery, she thanked Christian while the pair were in the elevator. As he leaned in to press the button, Tori kissed him, leaving an air of awkwardness between the pair.

The next time the pair met was once again in the elevator, where Christian made a snide remark about the last time. She rushed off, but he found her later at Salt and bought her a wine. The pair continued to run into each other – in one case, quite literally – around the hospital and the tension grew. For the third time, they got stuck in the elevator together and to get even, Christian kissed Tori, leaving her gobsmacked.

A week later, Justin began to suffer the same symptoms as before his surgery. He quickly organised an appointment with Christian who sent him for tests. He delivered the bad news that Justin’s cavernoma had returned, and kept it a secret from Tori, despite her interrogation. After Tori learnt the truth, she wished to be involved, but Christian was more interested in her. After learning that she had a crush on him, he asked her out to dinner. Despite her knocking a glass of water all over his crotch, the pair hit it off. After dinner, during a walk along the beach, Christian revealed that after his internship, he joined Doctors Without Borders. It was there he met his ex-wife, who has since remarried. When the date ended, the pair didn’t share a kiss which resulted in Tori overthinking the date. The next day, Tori confronted Christian about why they didn’t kiss, to which he responded that he was leaving town for a few days and when he returned, they should spend the night together. He then kissed her passionately.

Christian returned to town a day earlier than expected, which threw Tori off. However, the pair organised a dinner and planned their night together. Grace began crying, which ruined the mood and when Tori returned from tending to her, Christian had fallen asleep. The next day, the pair woke and finally slept together. Meanwhile, Justin’s condition worsened and Christian urged him to have surgery again. The pair once again decided to keep the truth from Tori.

After Justin’s surgery, Tori and Christian clashed over Jasmine’s involvement with Grace.

Christian was annoyed when Jasmine and her friend Lewis Hayes smuggled Dean and Bella in to visit Colby when he was brought into hospital after being attacked in prison, pointing out they could lose visitation rights if caught. He decided to move to the Bay and he and Tori began looking at houses, although they were thrown when Justin suggested Christian move in with them. Instead, Christian proposed to Tori and they got engaged. When Tori worried about Justin being secretive, Christian learned he was throwing them a surprise engagement party. He got Tori there but had to convince her to stay. When he was called away to an emergency, Lewis refused to let him operate since he’d had a sip of champagne. Since Lewis had another surgeon lined up, Tori took his side and Christian was left furious when the patient died.

When Christian treated Marilyn for a minor head injury, Lewis made a point of telling him to keep her in for observation. Christian asked Lewis what his problem was and Lewis revealed his wife Anna had died after Christian operated on her. Christian was confused, since although he remembered Anna, nothing had gone wrong with the surgery. He learned she was pregnant when she died and apologised to Lewis for not remembering him. He convinced Tori to support Leah and Justin moving out, although the pair ended up losing their money. He continued to insist to Lewis that Anna’s death wasn’t his fault but found himself second guessing himself, wondering if he’d missed something with Marilyn when he saw her being clumsy. He succesfully operated on Ari for a bleed on the brain, bringing him out of his coma. However, when another of his patients died, he found himself under review. With the family demanding an autopsy, he got drunk in Salt, then punched Lewis when he made a sarcastic remark about drinking again, finding himself reported for assault. The autopsy report cleared him and he was allowed to return to work if he attended anger management. He was then arrested for the assault but escaped with a fine. Lewis tried unsuccessfully to pick another fight with him, then knocked him unconscious and took him to a disused part of the hospital. Tying him up, Lewis tried to force Christian to confess on camera to causing his family’s deaths but Christian refused. Lewis then gave him an injection to kill him, leaving him having to be resuscitated.

He was distressed by the news Lewis had killed three of his patients to “prove” his incompetence but played peacemaker between Tori and Jasmine, telling them not to let Lewis destroy their friendship. He also suggested he and Tori set a date for the wedding for a month’s time. However, he began having flashbacks to being resuscitated, which Tori struggled to believe although Jasmine was more open. Jasmine got him to join her in a dip in the sea to sober up and he horrified Tori by going swimming naked first thing in the morning. He also advised Leah to keep searching for Susie against Justin and Tori’s wishes. He was convinced he had been spared for a reason and started driving at speed on country roads. With the wedding party due to fly out to Brody’s vineyard for the ceremony, Christian got distracted helping Justin and didn’t set out to pick up his suit until the morning of the flight, then took a detour to a skydiving centre. While he was waiting for a jump, he heard a report that Rachel Young, who he had spoken to earlier, had had an  accident. He rushed to treat her at the scene and, on learning her skull had detached from the spine, insisted on staying at the hospital to treat her and postponing the wedding. He spent all his time with Rachel at the hospital, refusing to set a new date, and told Rachel, who had been fitted with a brace to hold her skull in place,  he felt he had been spared in order to save her.

When Justin was brought in with a painkiller addiction, Christian offered to stay and keep an eye on him, but instead spent the night in Rachel’s room, resulting in Justin going missing for a time. Christian felt Tori didn’t understand what was important to him and decided to move out. He took Rachel on a day trip out to the beach, which Tori found out about and confronted him. When he refused to set a new wedding date, she called off the engagement. He continued taking Rachel on trips, getting a disapproving reaction from Jasmine. He treated the wounded including Jasmine after the food truck exploded but found she suffered memory loss in the aftermath, which he eventually diagnosed as absence seizures. Rachel made it clear she had a romantic interest in him but he told her he still loved Tori. He discharged her, only to be left devastated when she died in a road accident mere hours later. He realised there wasn’t a deeper meaning for his survival after all and lamented trying to save Rachel instead of marrying Tori. He went to the Morgan house to help Justin through withdrawals and arranged a date with Tori.

He went round to see Tori and kissed her. They had dinner at Salt and spent the night together, having a romantic picnic next day. After a holiday together, he asked Justin’s help in proposing to Tori again. When Tori asked him to move back in, he refused but assured her he was committed to her. With help from Justin, Leah and Mackenzie, he planned an elaborate proposal involving a meal on the pier, brunch at Salt and fireworks, only for them both to be called into hospital. Abandoning the plan, he instead proposed in the lift and Tori accepted. He operated on Nikau following a car accident and met up with an old colleague, Logan Bennett. When he invited Logan for lunch, he learned he had already had a first meeting with Tori when they’d clashed over Dean’s treatment.

He and Tori tried to organise a wedding close to home and ended up drunk ordering several items. He took Logan home for the night to keep an eye on him when he developed concussion. While discussing honeymoon destinations, he suggested he and Tori move to London full-time. After initially being shocked at the idea, she applied for a job there. Christian treated Leah’s nephew Theo when he turned up at the house injured. Tori told him she had the job but started in two weeks. He and Tori quickly arranged to get married before they left, sharing an intimate service in the Morgans’ garden before leaving.