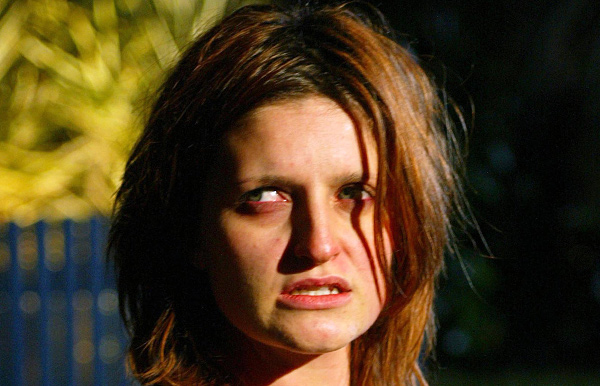 Sarah’s first appearance on the show was in disguise. When Felix played another trick on Dani, Sarah, his girlfriend, dressed up as a police woman telling Dani that Scott had died whilst out at sea on the Blaxland. As neither Dani or any of the others knew who Sarah was, they had every reason to believe that she was genuine and believed her. It was not until Scott returned unharmed that they realised this was another of Felix’s pranks.

After Felix has been bashed over the head, Dani, Scott and Kane decided to go check out his house. Whilst Kane and Scott were inside, Dani, who was sitting outside in the car saw Sarah walking along the road and recognised her as the policewoman that had told her Scott had died. Scott and Kane were shocked to find in Sarah’s house pictures of Dani stuck on the wall, photos of her going about her daily life. Kane and Scott managed to escape the house without Sarah seeing them.

Dani, Kane and Scott then went to Peter, who told them to stay out of it. Peter went around to see Sarah, but couldn’t see any incriminating evidence against her. However Peter advised them to stay away from Felix or Sarah. He also revealed that she was involved in Crystal Meth. Later that day Sarah came around to The Palace to tell them that Felix was dead and that it wasn’t assault any more, it was murder, and that whoever murdered him should be worried.

Sarah then went around to see Kane, but Kirsty answered the door. Sarah then made it sounds like Kane had been cheating on Kirsty and left. Kirsty then asked Sarah to come around, where she continued to play mind games with Kirsty.

Sarah next made an appearance dressed as the “female entertainment” at Noah’s bucks party. Dressed in a cat outfit, she finally revealed herself to Kane telling him “I can get any of you, anytime, anywhere.” Sarah was then brought in for questioning. The day before Noah and Hayley’s wedding, Sarah put a powder in the air conditioning. Fortunately for the guests Peter found the powder, giving the place a final check over, and Sarah was again brought in for questioning. Sarah then decided to move to the Bay.

Felix’s cause of death was then found to be an overdose of Crystal Meth, leading them to believe that Sarah had killed Felix. Kane then realised that whilst they were at the wedding, Sarah must have broken into the house. At the same time Dani went to wash her hands in the bathroom and her hands started burning. Tasha returned home to find someone had taken her gun. That night Sarah went in to the gym whilst Jesse was closing up.

Kane phoned to tell Jesse about Sarah, not knowing that Sarah was already there. As Tasha, Robbie and Kane ran towards the surf club, a gun shot was fired and Sarah fled. Jesse survived, the bullet having scraped his year. Sarah then went to The Palace and was found when Peter, Dani and Scott returned. She was then sent to a psychiatric hospital.

Peter then arranged for the people that Sarah had hurt to come and speak to her. She apologised for making their lives hell. She also finally admitted to killing Felix.

A couple of weeks later Sarah managed to escape the psychiatric hospital, and headed straight for Summer Bay. When news of her escape reached the bay, Peter Baker organised for all the people that had previously had contact with Sarah to be held in a safe house and they all gathered at Leah’s. Sarah meanwhile went to The Beach House, which was empty, and retrieved the gun from a cupboard, the gun having been hidden there since she shot Jesse.

Now armed she set off to The Palace. Dani and Scott were planning to head off to Paris, but they forgot to pack the passports and returned to the house. There they found Sarah holding the passports. Sarah tied up Dani and demanded Scott drive her to wherever all the other people were being kept. Initially Scott was reluctant, but with the threat of Sarah having a gun, he soon gave in and drove her to Leah’s house. Once there, she held them all as hostages, demanding to know who was responsible for killing Felix.

As time went by, she started putting pressure on them to tell her by saying “tick tock” and counting down. Eventually time ran out and three shots were heard from the house. This marked the 2004 Olympic Cliff-hanger.

When the show returned, it was revealed that after several characters had tried to wrestle her to the ground, that she had first shot Noah, before turning the gun on herself.