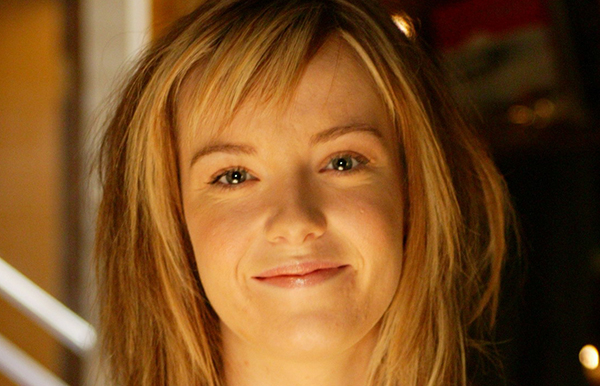 Kit Hunter first stumbled onto her screens in mid-2003 as a drunken kid in the drop-in centre and was soon revealed to be Scott’s sister. Tomboyish in appearance, she regularly was getting herself into strife with such things as including stealing Noah’s motorbike which she nearly collided into a car carrying her mum and Rhys Sutherland.

Scott and Beth then enlisted the help of Noah Lawson and Maureen Evans at the drop-in centre, to help them overcome Kit’s alcoholism. They put her on a “tough-love” programme and she was senti away to a programme that should help her.

When she returned there were still rocky-moments and Flynn told her that if she continued at the rate she was drinking at the moment, she didn’t have long left to live. She also began to fall for Noah, but he said nothing could happen between them as her counsellor.

Kit then decided to go back to school, as challenged to by Paris and began to use ex-alcoholic Irene Roberts as a mentor who took her to Alcoholics Anonymous meetings who helped Kit confront her problems. Kit also became friends with feral child Tasha Andrews who also stayed at the Beach House.

However when Irene found out that Kit had broken her trust she sent her packing back to Summer Bay House. Kit managed to get through her exams and for the first time she wore a dress for the school formal where she won the dance competition with her brother, Scott. However she was tricked by some of the kids spiking the drink, which upset and led to her running out. Noah came out to comfort her and they shared a kiss.

Kit decided that she was going to to university in 2004 and left after a few cramped weeks in Summer Bay House to start her new life.

She returned in the coming months, firstly for Robbie’s 17th birthday where she offered a troubled Jade to stay with her in the city and then when Scott was believed to have drowned on the Blaxland.

After Noah died painting began mysteriously appearing at The Palace, leading Hayley to think that she was painting in her sleep. Scott soon fathomed what was going on and called Kit up from the city. It was soon found out that Kit had been using the spare key to bring the paintings to The Palace, paintings she had taken about a year ago. Whilst she was there Kit had a talk with Hayley telling her that Noah had been coming “to see her” and told her to bring the paintings to her. When Eskimo Joe failed to turn up at the Noah memorial concert as Kirsty had promised, Kit and along with Barry Hyde stepped into the breach and put on a great show-closing performance.

Kit soon began growing closer to Kim Hyde, despite earlier arguments, which should really be expected from the feisty Kit. However this left sister Matilda heartbroken as she though that Matilda was the Hunter daughter that Kim was after. Kit soon had to return to Paris, but returned at the end of her next term and continued her relationship with Kim. Scott then invited Kit to come to Paris with him, but whilst Scott returned in the new year, Kit had got a job in Paris and decided to stay there.

Kit returned to the bay later in 2005, with her brother, Scott, now seeing Amanda and wanting Kim back. Unfortunately Kim was now together with Hayley, and both expecting a baby and Kit had her heart broken.

Kit suspected that Amanda was up to something and soon went about to find the evidence that something was up, but Scott wasn’t listening to her. When Kit managed to catch Amanda kissing someone at else at a motel, Kit managed to get the evidence on her mobile phone, Kit raced back to the surf club to show Beth and Scott the incriminating evidence. Amanda chased after Kit and as they got into the surf club, Amanda wrestled the phone to the ground. When Kit picked it up, the phone wouldn’t turn on and the evidence was lost.

Soon after Kim proposed to Hayley and she accepted. At Hayley and Kim’s engagement party, Amanda spiked Kit’s drink leading to some drunken behaviour. Beth thought that Kit was going off the rails and organised some treatment for Kit and she left the bay again.

Kit then bumped into a Robbie and Kim whilst out swimming in the bush with a friend from Uni. However, Kim had moved on to his psychiatrist, Rachel Armstrong. Kit and Robbie soon had more pressing matters on their mind when they found out that their grandfather, Graham, had suffered a heart attack and Kit renewed her rivalry with Amanda, who was now her step-grandmother, if such a term exists. Following Graham’s death, Kit soon left the bay again.

Kit returned again in 2006 for Jack and Martha’s wedding and was one of the unlucky few who were burnt enough to be airlifted to The City for treatment. Their helicopter crashed in a storm and in their attempt to look for help Kit sprained her ankle so she decided to stay put while the others went to look for help and old flame Kim decided to stay with her. Believing they were going to die, Kit and Kim slept together only to be rescued the next day. After overhearing a phone conversation Kim’s wife Rachel found out about their liaison but chose to forgive Kim and after making a full recovery, Kit returned to The City.

In the season finale Kit was to return again, this time clearly pregnant, to surprise Kim with the news that she was carrying his child. Rachel initially agreed to support Kit and Kim but it quickly became clear she was struggling. Kit and Kim tried to include her but it only made things worse as Kit and Rachel clashed over everything. During one such argument Kit developed a serious headache and Rachel drove her to the hospital only for the car to crash and end up balanced on the edge of a cliff. Luckily Kim was there to rescue them and in hospital Kit was diagnosed with a migraine. Kim blamed Rachel for arguing with Kit and was cold towards her until Kit stepped in and made him see sense.

When her ex-boyfriend James arrived in town Kit was initially cold towards him but when he told her he wnted to be there for her and the baby she decided to give him another chance and they got back together. With James around, Kit was no longer so reliant on Kim causing Kim to feel pushed out. Then Kim found a used joint in The Hunter’s and realised James was smoking pot. James admitted he used to smoke but promised Kit he would give up and she believed him. He turned out to be a liar though and when Kit found out, she threw him out. James though wasn’t willing to take rejection and in a drug induced psychosis, held Kit hostage. She was freed by Kim and Rachel and rushed to hospital with a severe migraine but unharmed.

With James out of the picture, Kit turned increasingly to Kim and with the birth drawing closer, she called him in a series of false alarms, which put strain on his marriage to Rachel. Eventually Kit’s labour came on for real and they headed to the hospital only to be forced off the road by a crash. Taking a dirt track through the bush, they were hindered when Kim’s tyre blew and the spare was also flat. Kit went into labour in the bush and Kim delivered his son, who they named Archie. It was touch and go for Kit as she lay unconscious but help arrived and she was rushed to hospital where she made a full recovery. What should have been a happy occasion though, turned to despair when the victim of the accident which had forced them off the road, was revealed to be Kit’s Mum Beth.

Grieving for her mother and struggling with motherhood, Kit relied increasingly on Kim and her feelings for him grew with her eventually confiding in Matilda that she still loved him. After several failed attempts to keep her distance, Kit finally admitted how she felt and shared a kiss with Kim, only for him to pull away and say he still loved Rachel. The announcement that he was trying for a child with Rachel led Kit to decide to return to the city with Archie. This caused rows between Kim and Rachel with Kim admitting to Kit that he did have feelings for her but was unsure of them. Kit eventually gave him an ultimatum but when he failed to decide, she made the decision for him and left the bay for the city.

Things in the city weren’t easy for Kit. The only bedsit she could afford was grotty, had a landlord who hated kids and a neighbour who played loud music all night. She did have a surprise visitor though when Kim, reeling from the revelation that Rachel had cheated, turned up in the City. Kit was unable to tell him to leave so let him stay the night but the next morning forced him to make a decision once and for all. He chose Kit and she returned with him briefly to say her goodbyes to Matilda, before leaving the Bay for good.