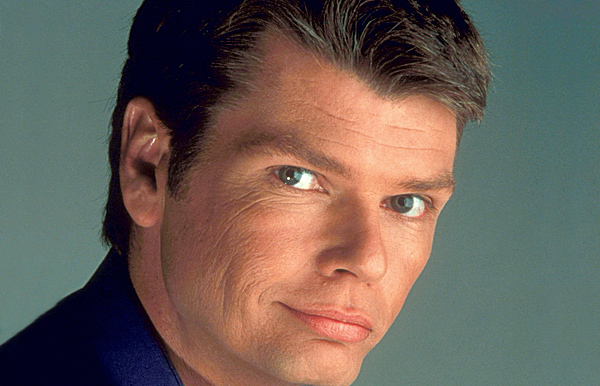 Rhys and his wife, Shelley, bought their family to the bay after finding life in the city tough. While in the city, Rhys started out life as a player of Aussie Rules Football, but after marrying Shelley and having their first child Dani, he gave up the sport and ran a fast food store instead. They bought the caravan park in Summer Bay and were quick to get it up and running. However Rhys soon found that he had been handed the park in not top condition and spent many of his first weeks mending the vans. Once the business was running, he set around opening up and running the kiosk at the surf club.

As more of the Sutherland’s past was revealed, it was revealed that Shelley had been pregnant with Rhys’s son but that stress at her work caused her to have a still birth. Rhys, having always wanted a son, was devastated and it caused tension between them, especially when Shelley’s work as a counsellor at the drop in centre began interfering with their home life once more. Rhys didn’t approve of his wife’s inclination to help all kids in need and he had a particular mistrust of bad lad Kane Phillips. It turned out that Rhys’s instincts were right when Kane violently raped Rhys’s edlest daughter Dani.

Having always been an over protective father to his daughters, Rhys reacted violently towards Kane and his temper caused increasing rows with Shelley, whom he blamed at first, for bringing Kane into their lives. For Dani’s sake Rhys and Shelley managed to work through their differences and they supported her when she took Kane to court. Rhys was devastated though when Kane got off and angrily attempted to drive him out of town. Kane did disappear for a while but later returned to cause more trouble for The Sutherlands.

In the meantime we met Rhys’s brother Pete and it quickly became clear that he was the opposite of Rhys. Unreliable and a gambler, he flitted into Rhys’s life before disappearing again but not without leaving behind a load of debt and a neglected son in Max. Max moved in with The Sutherlands and after a few hiccups became something of a surrogate son to Rhys.

Most of Rhys’s storylines revolved around his daughters and saw him lose his temper a lot, especially at his daughter Kirsty who seemed to go through a permanant rebellion. Things came to a head during the Summer Bay centinary when The Sutherlands had tickets to go aboard the Mirigani for the boat cruise. The boat was sunk in a particulary ferocious storm and several passengers were missing, including Shelley and Kirsty, who had snuck onto the boat, despite being grounded. Shelley and Kirsty were eventually found, in pretty serious conditions along with Rhy’s old nemsis Kane Phillips. It was revealed that Kane had actually saved both Kirsty and Shelley and Rhys was forced to thank the guy he despised.

In the aftermath of the Mirigani sinking, and unbeknown to Rhys, Kirsty had begun to get closer to Kane, even to the point of starting a relationship with him. When the truth was eventually revealed Rhys was furious and forced Kirsty to choose between Kane and her family. Though initially choosing her family, Kane was not quite as easy to be rid of as Rhys hoped and it took a long period of time, lots of rows and arguments before Kane finally dumped Kirsty and left the Bay in order to prevent her losing her family.

With Kane off the scene, the majority of Rhys’s problems revolved around his daughters, disapproving of their relationships or generally losing his temper. That was until Angela Russell arrived in the Bay. Angie was Rhys’s ex and trouble with a Capital ‘T’. She quickly revealed that her son Dylan was Rhys’s son, causing major tension between Rhys and Shelley as Dylan was the same age as the twins and therefore Rhys’s relationship with Angie had come in the middle of Rhys’s marriage to Shelley. Despite the later revelation that Dylan wasn’t actually his son and Angie’s subsequent death, Shelley could not come to terms with Rhys’s betrayal and decided to leave the Bay and a heartbroken Rhys.

To add more misery, Kane Phillips had also returned to The Bay and resumed his relationship with Kirsty much to Rhys’s fury and Dani’s misery. Dani’s devastation at having Kane back went so far that she actually ran him down and after a trial she was sent to prison. Though she was later released, Rhys struggled to forgive Kirsty for siding with Kane over the whole affair.

When Beth Hunter arrived in The Bay, she and Rhys quickly became a couple and moved their combined children into The Caravan Park House. Things weren’t plain sailing at first and major disasters like Rhys, Max, Kirsty and Jade being trapped down a collapsed mine, didn’t help matters. They were all bought out of the mine alive but Rhys was left with a head injury which meant for a short while he suffered brain damage. He also had to deal once again with the knowledge that Kane Phillips had rescued members of his family. Rhys still refused to accept Kane despite everything and his actions drove Kirsty to elope with Kane and marry him on the same day that Rhys and Beth surprised their children with their marriage. Kane and Kirsty continued to live in The Bay and make a go of things and with Beth as a voice of reason, Dani beginning to see Kane’s good points and more rescues from Kane, Rhys grudgingly started to accept him.

When Kane and Rhys were led to believe that Kirsty miscarried a child and she fled to the City after an angry Kane nearly raised a hand to her, Rhys thought he had good reason to go back to hating Kane. With Shelley’s new lawyer partner David serving an AVO against Kane, Rhys was happy to have him out of his life. When the truth, that Kirtsy had actually fabricated the pregnancy came out, Rhys actually bonded with Kane over them both having lost a child and when Kirsty returned to Kane, the relationship between them seemed to thaw a bit. Kirsty’s pregnancy was not plain sailing though as she was diagnosed with a kidney problem and lost her baby. Her condition became so severe that she actually needed a transplant and Shelley became the one to provide the kidney. In doing so though, she lost her new boyfriend David, who had an irrational fear of scars. With that coming on the back of the revelation that their daughter Jade had actually been part of a mix up at birth and wasn’t actually their daughter at all but the daughter of another couple, Shelley and Rhys began to spend an increasing amount of time together.

It wasn’t long before the reformed closeness between them led to something more and Rhys broke Beth’s heart by choosing Shelley and moving to The City with her.

He did return to The Bay a few more times to run the kiosk despite public opinion being against him but when he lost the vote for the license renewal to Jesse’s Bar proposal and Beth admitted that seeing him caused her pain, he decided to sell the Caravan Park and move permanantly to The City. He returned briefly during the Sarah Lewis saga, rescued Dani from The Palace and was with her when she headed to Leah’s and saw Sarah shoot Noah. To Scott and Kane’s anger, he returned again for Noah’s funeral with Shelley but thanks to Hayley, managed to make peace with his daughters, who had been supporting Beth. With Jade and Dani soon following him out of Summer Bay and Kirsty eventually leaving too, Rhys had no reason to return to the Bay and remained from then on in the City where he still resides as far as we know.

Early press materials reveal that Rhys was originally going to be named Dave Sutherland. This was changed during production.