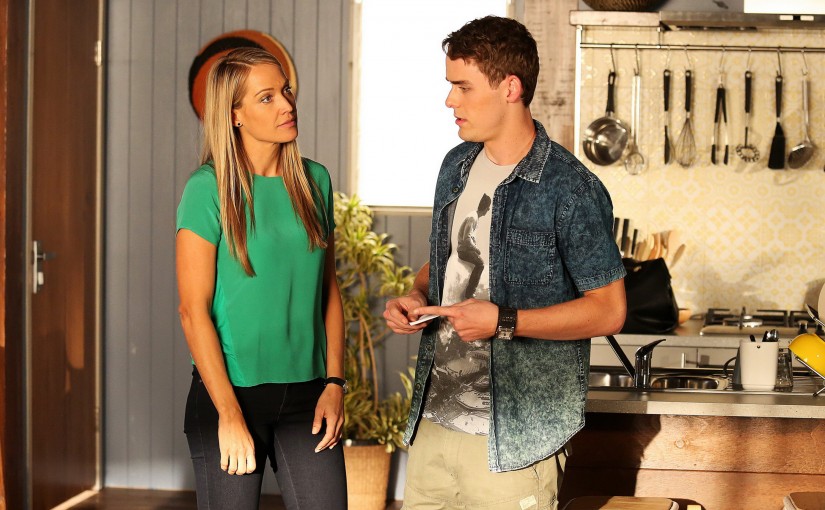 Ash and Phoebe butt heads over their living situation. Hannah warns Nate about getting too close to Ricky. Charlotte has a stalker and finds another note – someone knows her secret.

Charlotte thinks Josh was the one who slipped the note under her door the night before, and confronts him at the beach, assuming it’s about her and Matt. Josh assures her it wasn’t him; he wouldn’t risk getting Matt expelled. Later, Josh mentions to Matt about how Charlotte got a note under her door.

Matt immediately goes to Charlotte’s and asks her about it. She shows him the note and asks him if he has told anyone else other than Josh, but Matt swears he didn’t. Matt’s pretty worried but Charlotte tells him not to; she’ll take care of it if anyone makes trouble.

Later, someone is watching Charlotte from a car as she meets up with Hunter. Who is he and what does he want?

Andy confronts Charlotte on whether she’s still sleeping with Matt. Charlotte doesn’t deny it, but says she can take care of herself. Andy insinuates that Charlotte is using Matt to make herself feel better – but Charlotte thinks Matt knows the deal. Andy warns he won’t be around to pick up the pieces when this hits the fan.

After her chat with Andy, Charlotte comes home to find her place covered in dirt and leaves. She finds Denny’s diary on the kitchen bench with a page ripped out. Anxious, Charlotte heads to the site where she buried Denny. As she walks up to the spot she spies a note reading ”I know everything”!

The girls call a house meeting at the farmhouse, where Kat and Hannah gang up on Ash. They want him to put the toilet seat down, not leave dirty dishes in the sink, the list goes on. He asks for Phoebe’s help, but it turns out it was her who called the meeting. Phoebe promises to make some room for Ash in her closet if he cleans up his stuff. As she finishes cleaning out her clothes, Ash wants to run off for a surf. But Phoebe is annoyed; he needs to clean up his mess first! Phoebe wants him to make more effort, starting with the bedroom … but he thinks she has other reasons for suggesting the bedroom, and cheekily leans in for a kiss.

Later, Phoebe has demanded Ash makes dinner for his new housemates, and as he’s getting ingredients, he runs into Andy. Ash airs his grievences with Phoebe always telling him what to do, and Andy suggests maybe it was too soon for Ash to move in with Phoebe. Ash brushes this off, saying he loves Phoebe, but Andy counters by telling him he loved Hannah but it was still a big mistake moving in with her.

When Ash is at the house preparing an elaborate pork roast. Phoebe walks in, and initially thanks him for the effort, but when she sees the mess she wonders if he’s being too optimistic with his cooking. Then she sees the grocery receipt and goes balisitc – he’s just blown the budget! Ash is annoyed that he isn’t getting credit for all the effort he’s making, and is even more stressed when she reminds him that he STILL hasn’t cleaned their room up of his stuff. Ash can’t get a break.

Later, Phoebe is still snapping at Ash over little things, so he asks her what’s really going on? Phoebe admits it’s stupid that they’re fighting all the time, and admits  maybe she invited him to move in because she needed a punching bag to get over what happened with the babies. But she can’t expect him to be able to fix everything. He understands and Phoebe asks if maybe it would be a good idea for him to move out again? Ash smiles; he thought she’d never ask.

Hannah goes to pick up Ricky for Boot camp but she’s forgotten all about it, distracted by constant texts. She rushes to get ready as Kyle comments she’s been glued to her phone for days. Meanwhile, Nate receives a text from Ricky and smiles. Later, when Kat meets up with Nate, his phone beeps again, and Kat is curious as to why it’s been going off a lot lately.

Kat and Nate meet up with Kat’s friend, Pete, who’s in town for a photo shoot. As they’re talking, Pete gets a call letting him know his models won’t be showing up for the shoot. Pete’s stressed, saying there’s no time to reschedule, then he looks to Kat and Nate and gets an idea…

Nate and Kat are anxious about agreeing to be models for the photo shoot. Kat runs off to freshen up at home leaving Nate by himself, and he immediately texts Ricky with the news. Hannah comes in and airs her frustration over Ash and Phoebe’s contstant up and down moods with each other. As Nate pays his bill, Hannah sees a text from Ricky on his phone and asks how they’re going. Nate says they’re good as friends, but Hannah isn’t convinced that there isn’t something else going on.

Pete is briefing Kat and Nate about the photoshoot, just as Ricky, Kyle and Casey turn up for moral support. Kat thanks them but wonders how they even knew about it. Then Kat gets a call from the station; she has to go in for work. She apologises to Pete, who’s downtrodden as the shoot is based around a couple and can’t work without a woman. Kyle cheekily volunteers Ricky for the job. Ricky laughs but Pete lights up and pleads with Ricky to do it. Kat encourages her and Ricky reluctantly agrees to step in. As Kat leaves, Ricky whispers to Kyle that she’s going to kill him!