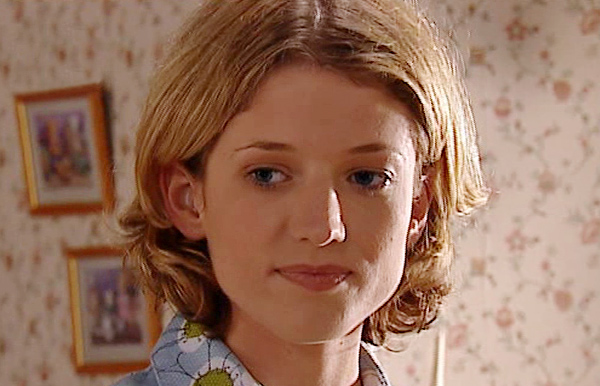 Peta’s always been living in the Bay but no one’s has ever noticed her. She must really have been a dire gal! She was first seen introduced when her friend Heather approached Hayley trying to get friendly with her but Hayley was unaware what it all was about till Heather enlightened her that she wanted Hayley to do this modelling stuff for a magazine.

Hayley couldn’t get it why she has been asked instead of Heather’s friend Peta. Hayley couldn’t bear the fact of going behind Peta’s back and talked to Peta concluding that Heather ought to be so dropped and to do the work on their own.

Will told them both they do not have a chance, at the Diner, but it backfired for he didn’t realise how beautiful Peta was after having her hair done and styled by Hayley in Irene’s bathroom.

Then the day of this hilarious shooting on the beach arrived and Will was with them while Irene’s taking their photographs. Will couldn’t believe that he’d never laid an eye on Peta before and was like struck by a lightning out of the blue.

He talked Sam into pretending that he wanted to spend some time with Hayley on his own making her design his board on; instead, Hayley got it the other way round and firmly believed that Sam was begging Will and that the latter only agreed because of doing him a favour.

Peta was that hard that she had been conned in such a gruelling way that she left Irene’s place earlier than expected while Sam and Will were refining their further plans on her. When Will hit the laundry he couldn’t believe his ears when Hayley’s telling him Peta had left in anger. Silly her didn’t get it more than a tad wrong and Will tried to patch up things with Peta but failed at the very beginning but managed to convince her somehow after having a yarn on the beach. At the lockers, Peta ceded and told Will that it was OK to carry on.

Peta’s place was completely unknown to everyone and even Will was surprised at the fact that she was allowed to stay away from home till midnight or so, without having any arguments at home. She was supposed to live with her gran who has not been seen for ages by anyone. Thus Hayley, Will and Sam tired to figure out – at first by exchanging descriptions – what she could be like. Sam even thought that she could be like some character-starring Psycho. They weren’t even sure if Peta was really calling her gran then or if she’s been buried in a big hole at Peta’s thus they wanted to find out and looked for a pretence this running out of money stuff just turned up at the right time and they convinced Peta to take them with her. Dave, her brother, wasn’t keen on this idea at all and told them to get lost as their gran wasn’t present. The others left and Dave told Peta not to do so anymore for this only meant big trouble.

Then, all out of sudden, Peta told Will that it was cool if he came with her to be introduced to her gran. Will’s got the feeling of Peta being ashamed to have a boyfriend like this not being adequate for her gran. Arriving at Peta’s, Dave was questioned by Peta about the “unexpected absence” of their gran but he didn’t sound very convincing; she tried to show him by the means of her hands what to say. Gran was said to have run into a gossip and to take the late night bus home. Will answered he wouldn’t mind waiting for he had nothing better to do anyway! Peta virtually couldn’t stand this thought of being caught out and tried to make him leave. Will left in anger for he had the feeling that something scald was going on and that she’d never have the intention to introduce him to her gran.

The very next day Peta got the heebie-jeebies when she opened a letter for her gran saying she was expected to join this jury duty stuff; she phoned her brother on the spot. As he was reluctant to leave the city after having found a job, Peta decided to enlighten Will as for her secret.

Her gran died on her sojourn in Poland some 6 months ago but both kept on living on her pension money sent. Will got they idea of a false medical attest for Peta and then to exchange her name with gran’s.

Then this bag lady stuff occurred to their minds and they went for having a good look on the streets and ended up with the Bay’s first ever heavily coughing bag lady. She was offered to come with them home, have a bath, and wear tidy clothes.

Annie, the tramp, was surprised at this unusual offer and was told it was part of a school project in fact. They even suggested calling James Fraser to have a close look at her eerie coughing! Annie was suspicious and tried to find out and learnt about this health attest and its background. She thought of being thrown out after this stuff being accomplished but Peta had second thoughts and disagreed with Will and decided to let her stay till she’s well enough. Not enough for her she went through Peta’s schoolbag stuff and found the note to be signed for this Teacher/Parent evening! Peta told her to stay clear of her but Annie was unstoppable and paid Flathead a visit telling him how diligent Peta was and that she’s bored in class because of her intelligence. Peta became fierce towards Annie afterwards and decided to introduce some rules but Annie didn’t manage to stick to them and was on the edge of being kicked out again. This time, Will was rather against this idea for he enjoyed himself tasting Annie’s excellent food.

Having meal in the presence of Peta’s friends, Annie made up this anecdote of Peta being stuck in the banisters when being very little. Peta tried to fend but no chance. The others owed their credits to Annie, not to Peta.

This was virtually the very end of Annie’s sojourn at Peta’s for she was deeply grieved by this made up story and even talked rudely to her in the presence of Alf telling this brazen lass to give her apologies to Annie enjoying this on her behalf.

Henceforward, Peta was obsessed by the idea of getting rid of Annie for good!

Thus they had to alter plans and after having interrogated Annie as for her family, this daughter stuff seems to be the appropriate cure for this “Annie disease”.

They went through all phone pages saying the common name of KENNEDY and they were about to give up hope as one day Annie being along at home answered the phone and a voice claimed that there was a message left behind for Peta.

Annie didn’t dare tell her about her identity on the spot but jotted down her number; she phoned back after regaining courage telling her with a stumbling voice that she was her mother and both came to terms that the whole deal was sort of dreadful misunderstanding and that Frances tried to get in touch but Annie’d already moved out by then.

Irene was angry with Will for not having let her know that he wouldn’t turn up for dinner and was positive about having a decent yarn with Annie. Popping by gets embarrassing for Peta for just as Irene and Annie were talking the doorbell rang and her daughter Frances appears in flesh. Irene’s completely speechless while the two of them were talking coming home for good.

Now with Peta really busted, and has to explain all the juicy details to the prying Irene. Not only the thing about the money to be paid back but also the problem as to where to move to shatters poor Peta and to be moving away very soon, Trav and Beck are the only shelters for local crisis case. What is she to do now?

Peta has been fostered by the Nashes.

When Edward Dunglass arrived in the Bay, she was attracted to him. When she later discovered of his disease, she did not leave him, despite his crazy ways and his lack of manners and respect towards her.

Peta later ‘married’ Edward and decided to move in with him. His mother refused to allow this, but she changed her mind after some persuasion. Peta left the Bay with Edward.