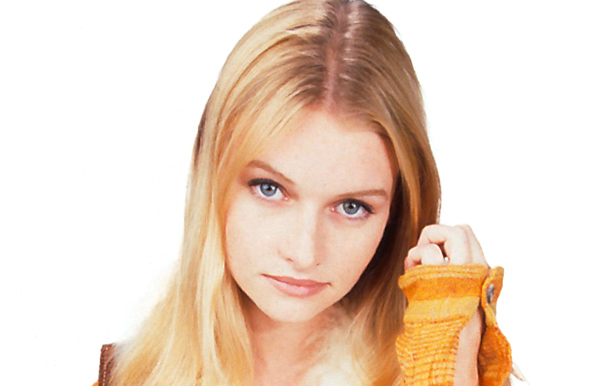 Justine returned after some 2 months along with her rude boyfriend Danny!! Justine’s health seemed to have improved but serious mental problems were more than obvious. She started nicking things for herself and made Tiegan to do the same till Tiegan was caught because of Justine’s malignity!!

When a rather destructive cyclone was about to hit the bay Justine nearly killed herself by rowing away from Aaron in a nutshell… Aaron and recently arrived Ian managed to save her miraculously from drowning!!!

Justine’s suffered from many failed relationships; i.e. Vinnie dumping her to become an item with Sally and Tom dumped her like a hot potato way back in early 1999.

Being accused of manslaughter in course of looking after the Collins’ baby Ruby, things got better again between Tom and Justine but the worst wasn’t over yet!!!

Sharon Wells, Jus’ mum, turned up out of the blue, won her trust in no time and faked a tape featuring Jus’ “confession” to sell it to some dodgy magazine to finance her drug addiction

Jus was devastated to see her mum appearing in court claiming the worst of her daughter but suddenly annulled her testimony and asked Justine for apologies.

The members of the jury found her guilt nevertheless and Jus was brought to the detention centre where she immediately got into trouble with the top dog Jo but won freedom from her in a decisive fight. Sharon failed to get into Jus’ good book after being released from the detention centre but at least Tom seemed to have become a pillar for her again!!! After having processed the grief caused by the accusation of having killed baby Ruby, Justine tried to get things back to normal again and got this idea of becoming an actress and moving to the city. Tom wasn’t rapt about this idea but insinuated that they might share a flat together to build up their future. Justine didn’t turn this idea completely down but was that doubtful about this idea that it was more than obvious that she didn’t like it at all and Tom wasn’t included in her life as actress. The very casting didn’t go like she’d imagined and Tom had this grin of relief in his face. And Vinnie taking “ambiguous pictures” of her DID Tom make feel utmost jealous although they’d split up before. Then participating in this play of this sleazy writer, which was supposed to feature Justine in the nude and their rehearsals at the Nashes house, was more than just the tip of the iceberg. As this former partner of this sleazebag turned up all of sudden, Jus eventually realised the true colours of this jerk and didn’t stick to this nude scene anymore but dared to make up a spontaneous dialogue on scene in front of the partially horny audience to let them all know what kind of type this writer really was but still most of the audience believed it was part of the play.

Nevertheless, this unpleasant experience didn’t make Justine give up her plans and she was adamant on leaving for the city, leaving a hurting Tom behind.