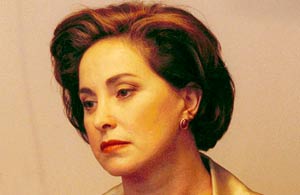 Feisty Mediterranean-born mother of the Poulos clan, Helen has visited Summer Bay on numerous occasions to support her daughter Leah and youngest son Alex.
She has a rather busybody-ish manner and tends to be a bit domineering with her husband and children but she always means well.

She has a tendency to take a dislikle to the new people in her children’s lives, but eventually warm to them. The best example would be Leah’s husband Vinnie. At first she was sceptical but eventually she realised he was a wonderful man and welcomed him into the family with open arms. She also formed a friendship with his mother, Stella Patterson, despite their initial clashes over Vinnie and Leah’s wedding. She even began to like Alex’s girlfriend Brodie despite receiving verbal abuse from her before they realised who each other was!

Helen may have been fond of Leah’s first husband and his mother, but now Leah’s engaged to Dan Baker and similar problems are arising with him and his mother Noeleen, as occurred with Vinnie and Stella. We’ll have to wait and see is she can make peace with the Baker family or whether there will be a cold relationship between the two families in the future.