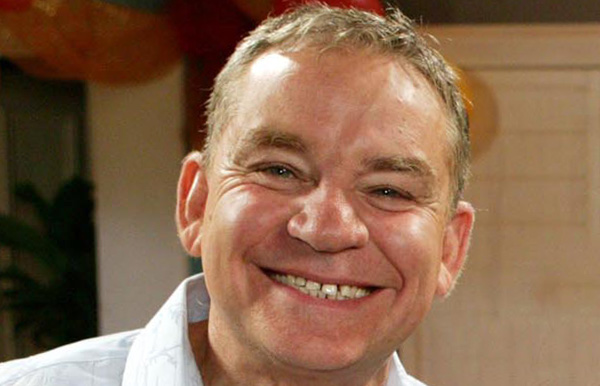 Theo first visited Summer Bay in 2000 in search of errant daughter Leah, who had last been seen when running away from her wedding to family friend Ted. He had a less than favourable first impression of her new boyfriend Vinnie, who he walked in on demonstrating his stripping act to Leah. Theo attempted to order Leah to come home to the city, telling her she would only be welcomed by the family if she broke up with Vinnie, and also offered Vinnie $50,000 to stop seeing Leah. When both refused, Theo reluctantly accepted their relationship.

Theo returned early the following year on hearing Vinnie and Leah were engaged, meeting Vinnie’s mother Stella. It was soon clear that neither parent agreed with their child’s choice of partner, with Stella put out that Theo had organised a Greek Orthodox wedding for the pair. Theo didn’t trust Vinnie to provide for Leah so bought her a half share in the Diner. When Vinnie refused to accept it, Theo called him too proud and Vinnie called off the wedding. Leah accused Theo and Stella of ruining things for them and Theo apologised, even managing to win Stella over and convince her to join them in a spot of Greek dancing.

Along with wife Helen and son Chris, Theo returned to town for Vinnie and Leah’s wedding. His youngest son Alex had been staying with Vinnie and Leah for some time and Theo was unhappy that Alex had walked out on a job with the electrician’s firm run by his brother Con…and even more incensed when Alex claimed Con was a crook. However, after a happy wedding ceremony, Theo heard Con making pointed remarks about family loyalty at the reception and realised Alex was right, angrily confronting Con.

When Morag Bellingham returned to town and met Leah, it came up in conversation that Leah’s father ran a restaurant in the city. When Morag later asked about the restaurant, Leah told her that it was named Nana’s—on confirming that it was situated on Bell Street, Morag was astounded as it was one of her favourite restaurants.

Vinnie and Leah summoned Theo back to town when Vinnie’s father Ralph ran off with the customers’ money from the business they had set up, leaving Vinnie with massive debts. Theo was furious, accusing Vinnie of risking his family’s future out of greed, but after a talking to from Leah and Alex, with the latter telling him not to put a price on his support, he agreed to pay off the debt and also provided Vinnie with a lawyer when he faced fraud charges. He and his family made further visits for the birth of his grandson VJ and for VJ’s christening, where Leah informed them that VJ was deaf.

Theo and his family, including oldest son Dmitri, next visited for Alex’s 21st birthday. However, Theo seemed more interested in family tradition than what Alex actually wanted, buying him the customary present of a car despite him saying he didn’t want one. He was angry to discover Leah was dating Jesse and told Alex he shouldn’t have let it happen. During the ensuing argument, Theo collapsed with a heart attack but recovered after a few days in hospital.

Theo, Dmitri and Chris went to wave Leah and VJ off at the airport when they were going to the States for VJ to have a cochlear implant. Just as Leah realised she had left the passports behind, Jesse turned up with them and Leah thanked him with a kiss, tipping her family off to the fact they had recently reconciled. However, after a few moments’ tension, they took him for a drink. Theo and Helen would continue to be shocked by their children’s behaviour however, first learning, when Leah was in a car accident, that she was acting as a surrogate for Flynn and Sally, and then that Alex was engaged to Brodie, who he had cheated on Hayley with. However, Theo found it easier to accept that Helen and once Helen and Leah had sorted out their differences, he organised a meal to welcome Brodie into the family.

Theo next visited Summer Bay in 2005, alongside Helen, Chris and Dmitri, for Leah’s wedding to Dan. They arrived to find Leah on the verge of calling off the wedding after Amanda had cancelled everything but helped Peter to pull together a last minute riverside ceremony. He gave Leah away and was seen sitting with Sally and Flynn at the wedding reception. He visited a month later to tell Leah that her grandfather in Cyprus had had a heart attack and wanted them all to visit him before he died.

After a fairly lengthy absence, Theo returned to town in 2009 with Helen and Chris for Leah’s 30th birthday. However, Theo and Helen spent most of the party bickering and Chris revealed to Leah that Theo and Helen were separating. It turned out that the family restaurant was in trouble: Theo had tried to update it but had only succeeded in putting off their existing customers and had also re-mortgaged the house without telling Helen, meaning they were on the verge of losing both the home and the business. Leah offered them Dan’s life insurance as a loan, which Theo was happy to accept but Helen was very much opposed to. The result was Theo leaving the marital home and moving in with Leah and VJ.

He spent the next week hanging around the Diner, frustrating Leah and Romeo by getting in the way. VJ upset him by mentioning that he’d overheard Leah saying he was getting on her nerves. He responded by booking a flight to Cyprus but when he tried to sneak out during the night he was surprised by not only Leah but also Helen and Chris. Convinced to stay to the next day, he attended the meeting at the school about a memorial for Dan with the rest of the family and afterwards agreed to go back to the city with Helen and try and work things through.

Although Theo has not visited Summer Bay since, Leah has made frequent references to visiting her parents in the city so it would appear he and Helen are still going strong.