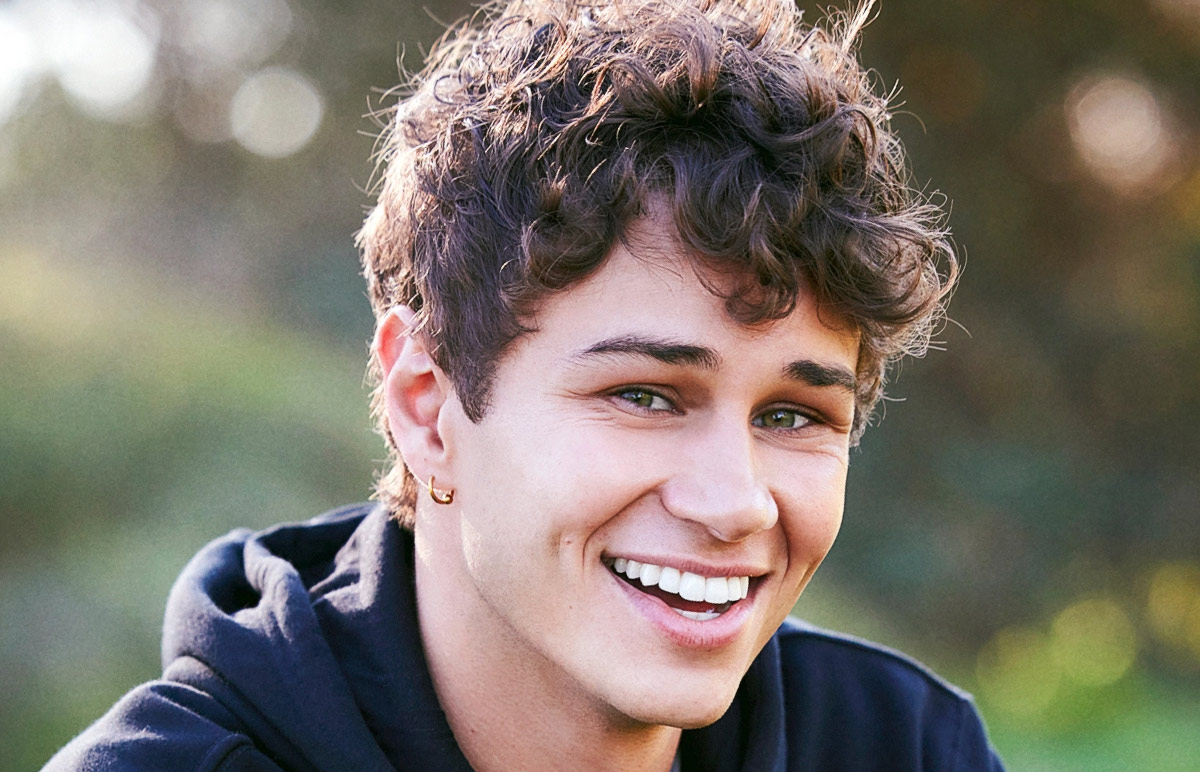 The first-born nephew of Leah, and son of her oldest brother Dimitri, Theo turned up on Leah and Justin’s doorstep accompanied by Cash, who had pulled him over for speeding. He revealed his dad had kicked him out and said it was because they’d fallen out while working together. Leah learned from Dimitri that Theo had been scamming customers at his car dealership, selling them fake insurance and pocketing the money. Theo drove off, then turned up injured a week later, saying he’d got into a fight with two guys who tried to steal his car. Justin later forced him to admit the truth: He’d been beaten up by some of the people he scammed. Leah refused to let him stay at the house when people were after him but did arrange for him to stay at the motel.

Theo took an instant liking to Chloe when he met her and quickly volunteered to help her out with food deliveries when her boyfriend Ryder overslept. He accepted an offer from Justin to work at the garage but turned up late for his first day and then left early, claiming he had a migraine. He volunteered to help Chloe arrange Ryder’s 21st birthday party and to get Ryder to the club where the party was without him suspecting. However, his method was to abduct Ryder, lock him in his car boot and drive him there, which didn’t leave him in a party mood. As a result, Chloe spent most of the evening with Theo and they stayed out all night together. Ryder tried to warn him off Chloe and, after stopping Nikau having a go at Felicity and Anne in Salt, Theo told him that he and Chloe had spent the night together, refusing to elaborate. He let Bella accuse Chloe of sleeping with him in front of Ryder (who had actually already broken up with her) before saying he just meant they’d spent the night talking.

Theo was invited to move in with Leah and Justin, but got Ziggy offside at the garage by overcharging a customer by $200 and offering to split the money with her. He began not showing up to work and leaving the house in a mess. Leah finally challenged him and he was surprised to learn Justin had covered for him, agreeing to make more of an effort. The new start almost unravelled straightaway when Justin blew up at Theo when he innocently suggested throwing out a box of Mason’s old things. Leah explained Mason was Justin’s brother who had died and Theo cleared the air with him. He offered Ryder and Chloe a way to make easy money, showing them that he had uploaded the video of him kidnapping Ryder to a monetised channel and suggesting he and Ryder film and post a series of challenges. The first challenge selected was a chilli eating contest with Theo deliberately getting the hottest ones available. Ryder won the challenge but was left throwing up in the toilet and Theo took the opportunity to kiss Chloe. She assumed he only did it to wind up Ryder and kept quiet, but Theo admitted to Justin he really liked her.

Justin and Ryder realised Theo had been rigging the challenge selection by submitting the same thing five times, so Ryder chose the next challenge: Creative cocktails. Ryder served Theo a conveyor belt of disgusting cocktails and glued him to the seat but Theo drank them all without ill effect and simply slipped out of his trousers. Although he was declared the winner, he was disappointed that Chloe saw him as a joke and tried to improve her opinion of him by helping out with admin for her catering business. He and Ryder had a firewalking challenge and burned their feet when Cash interrupted them. Justin named Ryder the winner and when he taunted Theo over it, Theo responded by telling him about kissing Chloe, prompting him to pull out of the challenges.

Needing to do the challenges without Ryder, Theo tricked Nikau and stole the surf club’s ATV, taking it for a joyride. He returned home to a hostile reception from John and Justin, who pointed out he could be charged. John wanted him to work in the juice bar as punishment but it didn’t last long since he ended up in a fight with Nikau. Ryder approached him about doing the challenges together again as Justin tried to distract him by teaching him to surf. Justin bought Theo his own board which Ziggy tried to buy off him. Ryder suggested Ziggy and Theo have a challenge for the board and Theo accepted Ziggy’s offer to see who could change a tyre fastest. It was only after she’d won easily that she revealed she’d worked in a pit crew, which he considered cool.

Ryder suggested a challenge where he was buried in a coffin for five hours. Theo agreed to help (although the only food he provided him with was chillis) but went to the Diner for lunch instead of staying to keep watch over him, also getting distracted checking on an upset Chloe. While on his way back to Ryder, he fell and was knocked out, with his leg caught in barbed wire.

He was unable to reach his phone and both he and Ryder spent the night trapped until they were found by Roo and Justin. With Ryder unconscious from lack of oxygen, both Alf and Roo were furious with Theo. Theo visited Ryder to check on him before being thrown out by Alf.

He received another serve from Alf in the Diner and was approached by Ryder to try and heal the rift. However, Ryder taking him to apologise failed to work out and he ended up being arrested for the ATV theft. He didn’t argue with the charge, acknowledging he was guilty, and suggested he and Ryder stay away from each other. He was given community service and accused Alf of laying all the blame on him instead of looking at his own role. He nearly left town but Justin talked him out of it and Alf later apologised to him. Theo encouraged Justin to make things up with Alf and also advised Ryder to do the same. He had a brief panic on learning his community service papers had been sent to his old address in the city, fearing his dad would find out, and confided in John that his dad used to beat him. He suggested he and Ryder record videos of everyone’s recollection of Ari after his death. Chloe appreciated it but Mia was angry with them.

He was shocked when he learned Leah had gone to see Dimitri and worried she and Justin wanted rid of him. Justin instead offered him an apprenticeship at the garage but he remained concerned about Leah’s return, coming close to leaving town, and was relieved when she told him Dimitri wanted nothing to do with him. However, Dimitri then turned up, revealing Theo’s mother Cassandra had left him and trying to get Theo to come home. Theo drove off and ended up having sex with Chloe before spending the night in the garage. He was stunned when Chloe told him their liaison was meaningless and accused him of hassling her, then punched Dimitri during an argument. He refused to explain himself but John filled in Leah and Justin, who supported Theo. He and Leah went to see Cassandra but as soon as he came back, he was confronted by Dimitri, his fuse as short as ever, with only Ryder’s unexpected arrival stopping things getting violent. He agreed to meet Dimitri at Salt, where Dimitri insisted he only wanted what was best for him. Theo initially believed him until he overheard him threatening Leah and declaring he’d say whatever was needed to get Theo to come home. When he found out Dimitri had hit Justin and given him concussion, Theo confronted his father, who tried to force him to leave town with him. Cash stepped in and, when Leah reported Dimitri for assaulting Justin, Theo made a statement about Dimitri’s abuse of him. Charged and bailed, Dimitri said an awkward goodbye to Theo before leaving town.

Theo’s good mood working at the garage dissipated when he forgot to hand in his first assignment. He came close to dropping out but Ziggy took it upon herself to mentor him. He was the only person to be excited about Ryder’s plans to become a croupier and ended up being the one to comfort Chloe after her manipulative behaviour came to light, understanding the effect trauma could have on a person. He borrowed Justin’s guitar as part of a romantic picnic, explaining he had taught himself to play but Dimitri had smashed the guitar he saved up for, considering it a waste of time. Justin gave him a spare, saying he was welcome to play in their house.

He was confused when Chloe invited him for a drink so brought along Becky, a friend from TAFE, only for Chloe to quickly leave. After they cleared up the misunderstanding, they had a second attempt at drinks and kissed. He was mortified when Leah invited Chloe round for dinner and then questioned her about her intentions. He accused Leah of ruining things for him but the experience cemented the pair as a couple. Leah and Justin had a word about Chloe spending all her time at the house but Theo wasn’t able to bring himself to say anything, resulting in Justin telling her rather bluntly. They soon got over it but then Chloe invited Theo to a family barbecue at hers. Theo was extremely nervous about spending time with Nikau and Tane as her boyfriend, which they played up to, but took it in good spirits when they pushed him in the pool.

He struggled with his TAFE assignment and was frustrated when Justin wrote it for him. Unwilling to hand in someone else’s work as his own, he did it again from scratch, earning an 82% distinction. His elation disappeared when he learned he was being investigated for plagiarism and could be thrown off the course, since Justin had told TAFE that he wrote the assignment. He showed the tutor the assignment Justin wrote but still had to sit an exam to prove he knew the subject. He was pleased when he passed and was cleared of all wrongdoing However, he learned Justin couldn’t continue as mentor.

*In Dimitri’s earlier stints in the early 2000s, his wife was named as Melinda. By 2022, her name had been changed to Cassandra.

**Although Dimitri explained that they were expecting their third child in 2003, there has been no mention of Theo having siblings as yet.