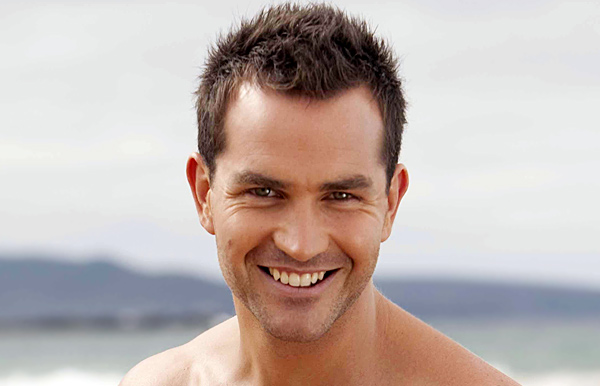 Penn was first seen in a flashback to six months previous, watching a news report on the Summer Bay race riots and especially an interview with Alf with some amusement. He arrived in Summer Bay in the present day and met Irene and Marilyn at the Diner. Marilyn took him to the caravan park where he met Miles, Nicole and Romeo; he rented a van and said he’d be in town as long as it took. He read Nicole’s palm and told her there was something wicked in her future.

Penn took Nicole for breakfast the next day and turned on the charm with Colleen. Nicole lost track of time and they were still there at lunchtime, meaning she missed an exam. Penn convinced her it didn’t matter and kissed her. However, once he and Nicole had parted company, he met up with another woman on the beach, took her number and kissed her as well. He began spending more time with Nicole, who confided in him about her break-up with Aden. Miles wasn’t entirely comfortable about them seeing each other when he found them kissing in the house and ordered Penn away when he turned up to school to see Nicole. The pair later went for a tarot reading with Marilyn and she was impressed when Penn drew a set of cards that indicated he was the best person possible. After he’d gone however, Marilyn realised that the cards could have meant the exact opposite.

When the Walkers returned to town, Penn quizzed Nicole about her history with Sid. He then stirred up trouble by telling Sid that Nicole still liked him. He stole small items from the other caravan park residents then planted them, together with his own wallet and iPhone, in Colleen’s mobile home. He reported the items stolen, resulting in Colleen being arrested. Alf refused to believe Colleen was a thief so Penn offered to drop the charges. Romeo saw him with another woman on the beach and worried he was cheating on Nicole. When Romeo and Indi saw a girl, Chrissie, coming out of Penn’s caravan, Romeo confronted him only to learn she was one of the backpackers whose things had been stolen; Penn had convinced everyone else to drop the charges against Colleen too. Despite this, he still met up with another of his flings, Annalise.

Penn continued to be erratic in his attitude towards the residents, offering financial support to Tony for his boxing programme and Angelo for his new restaurant and organising a work party to get the latter ready in time, while conversely acting hostile towards Elijah and setting fire to Charlie’s police car. He wrote a letter to his father, in which it was revealed he had lived in Summer Bay as a child, but binned it without posting it. He took Nicole back to his caravan to show her a sketch he’d done of her and they ended up spending the night together.

Penn turned up at hospital with an injured hand; he claimed not to know how he got it but Sid suspected he had punched a wall to do it to himself. When Nicole turned up to collect him, he claimed Sid had admitted to having feelings for Nicole. He began telling different stories to different people, telling Sid he was trying to tell if Nicole still had feelings for him, telling Nicole that he had warned Sid off her and telling Marilyn that Sid did have feelings for Nicole. He joined Nicole in collecting Ruby from Liam’s when she turned up there drunk.

He and Nicole went swimming together, where she admitted she wanted a serious relationship with him rather than the casual arrangement they’d had before. However, Miles was getting tired of Penn’s manipulation and threw him out of the caravan park. Nicole was willing to stand by him but instead Penn delivered a cruel character assassination of her and ended their relationship.

Penn stuck around in town, moving into a room at the Sands. He met up with Nicole on the beach and told her his father had been a drug addict and as a result he had difficulty trusting people. Nicole seemed to accept his story but as they were talking she pricked her hand on a needlestick. Penn took Nicole to hospital where, despite Sid saying it was unlikely, he convinced her she might have been exposed to HIV and she needed to take medication. In fact, Penn had planted the needlestick himself. While he was treated as a hero for supporting Nicole, Penn got Alf and John’s backs up by reporting the incident to the papers and television news.

Penn took Nicole out for dinner but then told her he had planted the needlestick; however, he refused to confirm that this meant she didn’t have HIV. When Miles and Alf confronted him, Penn claimed Nicole was making it up, then taunted Nicole with the fact Miles had doubted her. Alf confronted him, resulting in a heated argument. Soon after, Penn was brought into hospital beaten up and told Sid that Alf did it. Penn was taken in for emergency surgery and when he came round said it was not Alf but a ute owner he tried to hitch a lift with who beat him up. It was revealed in flashback that Alf’s anger had been because Penn had told him he knew about “the affair”.

Having already witnessed her problems with drink, Penn wound Ruby up about a record label picking up Liam but not her, then bought the schoolgirl a bottle of vodka. He asked Alf if he remembered the name Tulip O’Hare. In flashbacks and through conversation, Penn’s history was revealed: Tulip had been his mother and, in 1987, Penn witnessed her having an affair with Alf. Shortly after Alf ended the affair, Tulip, already traumatised by the death of her daughter, died of an overdose. Alf stated that Penn had been using a different name at the time but couldn’t remember what (Penn was the name Tulip called him as a child and it was later revealed his grandfather had the surname Graham.) Afterwards, Penn’s father left him with family. As an adult, he was institutionalised after attacking a group of men who called him an orphan but released when he convinced them he no longer felt resentment towards Alf.

Penn broke into Alf’s bedroom and planted photos of Tulip everywhere. When Alf got rid of them, Penn returned them, defaced, and told him he wanted to show people who he really was. He found John when he was collapsed after a heart attack, giving him CPR and getting him to hospital. He continued to menace those closest to Alf, like Miles and Irene, and told Alf and Miles that his father went to pieces after Tulip’s death and ended up overdosing. He visited John in hospital and suggested he owed him. Leah ordered him out of the Diner and Charlie took him in for questioning but could find no evidence of wrongdoing.

Penn became increasingly unstable, spending spare moments “talking” to his dead parents. He ignored Alf’s attempts to get him to leave town, then cornered Colleen at the Diner and told her that everything people had told her about him, including the fact that he’d framed her, was true. He vandalised the caravan park house, then confronted Miles at the Diner and deliberately provoked him into hitting him by threatening the kids. He also provoked John by suggesting he could lend him Gina for a night as payment for saving his life, with John having to be restrained by Xavier. He approached Alf, Sid and Marilyn at the surf club and tried to provoke Sid by making suggestive comments about Marilyn but Sid refused to hit him.

Penn also spooked Nicole by sitting on her towel on the beach waiting for her. When Ruby accidentally gave him a glancing blow with a car while Angelo was giving her a driving lesson, Penn, seeming increasingly paranoid, accused Angelo of doing it deliberately so he wouldn’t have to pay back his investment in the restaurant, which Penn was using as an excuse to hang around. He then got into a confrontation with Alf, Sid, Angelo and Will at the restaurant, during which Alf had to be restrained while yelling that he would kill Penn. The following morning, a maid found Penn’s room wrecked, with blood on the floor.

The police carried out an investigation into Penn’s disappearance and assumed death, but were on the verge of winding it down when his body was washed up on the beach: He had been stabbed to death. Not long after, Nicole discovered she was pregnant with Penn’s child and would ultimately give birth to his son, George.

It wasn’t until the beginning of the next year that the details of Penn’s fate were revealed. On the night he disappeared, the group at the restaurant had offered to pay Penn to leave town. Penn had called Alf and asked him to come to the hotel with the money, then stolen a knife from the bait shop. Daria Hennessey came to his room first, offering herself as an ally in taking money from the townsfolk, but Penn had turned on her. Will then arrived and Penn attacked him with the knife, with Will killing him in self-defence. Will and Daria had then dumped Penn’s body out at sea.