Home » Home and Away Characters » A - F » Martin Dibble 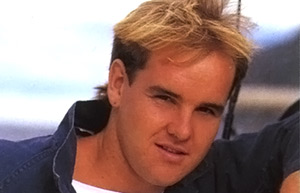 Local idiot Martin was instantly besotted with Carly Morris. Unfortunately she didn’t feel the same way and was lusting after surfer Matt Wilson but that didn’t stop Martin from doing everything he could to win her over. His first storyline came when along with best friend Lance Smart, he rescued Carly from drowning only for her to thank them by releasing the handbrake on their car and forcing it to crash into headmaster Walter Bertram’s. With a furious Fisher causing them both to lose their jobs, the two sought to get revenge by planting a jellyfish in his car. Their plan backfired though when they realised too late that Fisher had actually helped them get their jobs back. Their next act was to audition for Frank and Roo’s band and Martin was accepted, with Lance opting to become a ‘roadie’

Martin was accused of destroying Neville’s bagpipes but the culprit was revealed to be Sally. He and Lance then tormented local handicapped boy Nico into spraying manure all over Fisher’s garden but they were found out by Alf and Fisher ordered them to clean the lawn by hand. Martin refused though and the task was left to Lance. Having been banned from buying alcohol by Alf, over their prank on Nico, Lance and Martin decided to brew their own.

Despite their faults Lance and Martin did show they had a loyal side when, after Tom was dismissed from his job, they led their fellow workers out on strike in protest. In another amusing incident, they accidentally got Fisher’s cat drunk on their home brew and desperately tried to sober him up so he could be returned. Their next escapade involved drilling a hole in the shower block in the caravan park so they could spy on a guest. Unfortunately her boyfriend didn’t see the funny side and after he was finished Lance got a poke in the eye with a broom, from a woman, incensed at ‘men like him’.

Lance was horrified to realise his mother Colleen had her sights set on Donald Fisher and he and Martin set on a number of ways to deter her. Their first attempt at spiking his drink and making him look like a drunk, backfired when Celia drank the drink instead. He was horrified to realise that Lance had given their lottery money away to charity and was delighted to be Roo’s date for the end of year school dance.

When Bobby and Ailsa setup the Diner, Martin wanted to be a partner and when Ailsa reluctantly agreed he even went so far as to attend night classes in order to impove himself. He got himself a new girlfriend in Leanne but she tried to act classy to impress him but ended up scaring him off so he pretended to be a slob to get her to dump him. His plan put Leanne off him but she tried to get him to dump her by reverting back to her old ways only for Martin to fall for her again. He thought Matt was making a move on her and hit him but Leanne’s ex turned up soon after and challenged Martin to a fight. Martin wound up with a broken arm and Leanne left with his ex.

He was besotted with Lance’s girlfriend Marilyn and asked her out, leading to a furious Lance throwing him out. He grilled Stacey on the Macklin’s rich clients and at a dinner at The Fletchers managed to convince the Investor Peter to sign a contract which kept Frank and Tom in their jobs. He was made acting Manager when Tom was missing in a storm. Stacey’s friend Nina convinced them that they could be stars and they signed a contract and jumped through hoops to impress them.

With their band Image flying high after a chart release, Lance began to get cold feet and went on the run. He was mistaken for a mythical creature, a bunyip and confided in Martin who warned him he might get into trouble with the police. Adam found out about Lance being the bunyip but Martin persuaded him not to call the police and they went ahead with their appearance at the Sands opening but Lance deliberately crucified the song. For some reason the papers gave him great reviews so Lance made a fool of himself on Saturday morning TV. His plan worked as Nina ripped up the contract and sacked them but it left Marilyn and Martin furious with him.

After finding out that Adam was posing as the bunyip and making a fortune from selling tours of the area, Martin offered to pose as the bunyip for a cut. He also ordered bunyip figures for Adam to sell but they were found out when a scottish bunyip hunter shot the creature with a tranquilizer dart and was surprised to find Martin knocked out in the disguise. With the police on his back and the delivery man after him for the order of bunyips he placed, Martin resorted to selling them in the school to earn money but his attempts only led to his arrest.

With Marilyn having left the bay, Martin teamed up once more with Lance and went through a number of get rich quick schemes. Lance eventually won some money on a horse after a dream he had and used the money to buy the hot dog business Martin had wanted to buy. The two friends made up when Lance showed Martin the business registered in both their names. Their business was a failure though and the council took their hot dog stand after they failed to apply for health and safety certificates so they were forced to accept Celia’s help to rebuild the business but had to give her a 90% share in return. They hated working for Celia and tried to hide from her but she caught them continually and in the end threatened to sack one of them. They competed against each other to decide who stayed but when Celia finally decided to sack Lance, they threatened her back demanding that either they both stay or both quit. Celia warned them that if business didn’t pick up in a month she’d dissolve it and they’d both be fired.

They tried to make additional money on the side by selling out of date sausages but after a cat they fed them to died, they became convinced that they had killed Celia as she had eaten some too. They spent a day waiting for her to die when she finally collapsed on them only to come round almost instantly and admit that it had been a joke to teach them a lesson about food poisoning. hen Marilyn returned to the bay she convinced Lance and Martin to appear on her TV show but the producer treated lance and Martin as idiots causing Marilyn to cover the TV crew in tomato sauce.

They recruited Marilyn to take over Celia’s role in their business and she moved in with them but they ran into difficulties as Marilyn messed up with the customers and Martin felt uncomfortable at home. When Martin and Marilyn had a heart to heart Lance became convinced they were having an affair, causing another row. Marilyn recruited Lance to set Martin up with her friend Greta but Martin was unimpressed with her calling her fat and ugly and causing Marilyn to hit him. He was talked into going out with Greta but got a lot of stick from everyone about his ‘whale’ of a girlfriend and when she heard him talking about her to Adam and Matt she was hurt and Martin felt guilty. He apologised and asked Greta to stick around and after a few days he grew fond of her and kissed her. Greta though got cold feet and told martin that she didn’t want a relationship, before leaving town.

Pretending he was devastated over Greta, Lance and Marilyn set him up with a number of girls, two of whom ended up fighting over him. He and Adam concocted a plan to sell lance’s car behind his back but it was stolen during a test drive and Marilyn and Lance later found it abandoned. They were arrested driving it back and Martin and Adam were shocked to realise that the car had been used to commit an armed robbery. They staged another robbery to try and get Lance and Marilyn off the hook but only succeeded in getting themselves arrested and a furious Lance insisted that Martin move out.

He took a phone call from his Doctor and explained that he wouldn’t be around much longer but Marilyn and Lance overheard and assumed he meant that he was dying. They convinced Carly to grant him a dying wish and kiss him but after she had done so she mentioned about him dying and he asked her where she had got that idea from. It turned out his not being around much longer was because he had joined the army and after thanking Lance and Marilyn for granting him his wish of a kiss from Carly, they had a final toast to their friendship. Martin left the bay to join the army and was farewelled onto the bus by all his friends.

In 2000, Martin returned to Summer Bay for Sally’s wedding, a changed man, claiming that he was running a mobile car tuning business, called Mobitune. When Lance found him in the Diner, they talked about the past and had too many drinks at a stag party. Despite his claims that he had a room booked in the Sands, he slept on the beach overnight.