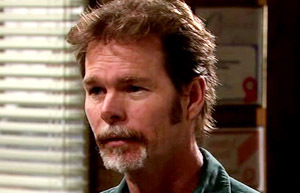 Tim was Aden’s boss at the construction site and at first glance appeared a decent guy who was keen to have Aden on the team. He backed Aden over his court case but during a phone call he asked the person on the other end whether they wanted something doing about Belle. He later berated somebody over the phone for damaging the wrong car, after angelo’s had a brick put through the window. He saw Aden with Belle and warned him that hanging around with her could lose him his job.

He became suspicious when some plans went missing from the site office just after Aden had been in there and phoned somebody to warn them to watch Aden. He later fired Aden, insisting it was just a business thing but aden was unconvinced. Later Belle received an anonymous phone call saying Aden was injured and turned up at the site. Tim told her that she had been had and when she returned home she realsied the whole thing had been planned to steal the plans from her room.

He was revealed to be Murray’s contact after he met him and demanded that Murray steal consent forms that Belle was collecting. Murray told him that he had only accepted a bribe because he was told by Tim that the land wasn’t toxic but Tim warned Murray that he was in it up to his neck. When Belle and Murray staked out the development site they were spotted by Tim and his men who were observed getting rid of toxic waste material. Tim and his men chased them but Belle got away, her camera was missing though. With Angelo’s support Belle asked after murray but Tim denied knowing who he was.

Tim was questioned by Charlie and Jack over Murray’s disappearance and the missing camera and later Tim arrived with the camera saying that it was found at the development site. After Belle was attacked and her memory card stolen back a desperate Angelo met with Tim and he traded Angelos’ freedom over attacking Belle in exchange for Angelo swapping the soil samples. Angelo later attempted his own revenge by bailing out Nobby, the man Tim framed for attacking Belle but his attempt at making Nobby wear a wire ended in disaster when Tim phoned Angelo threatening him that Nobby was gone and that Angelo should keep his mouth shut. He was seen throwing Nobby’s drivers licenseb into a freshly dug grave.

Tim was on the phone to Angelo when he insisted they meet and Tim agreed to meet Angelo at the development site but Tim failed to show and a jumpy Angelo shot Jack after two shots were fired into the darkness, supposedly by Tim. He was quizzed by Charlie over Jack’s death but insisted he was innocent. Charlie took his phone and held him in custody while using his phone to trap Angelo. She later released him but he kept his phone. He turned up at her sting against Angelo and Charlie tackled him to the ground to keep him quiet. She later told him that she believed he didn’t kill Jack but thought he knew who did and Tim told hers he was right on one score before leaving.