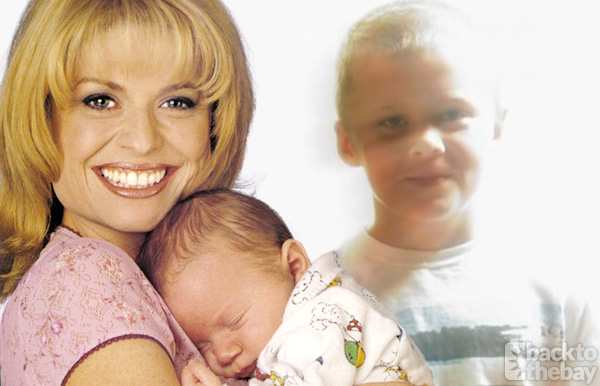 Byron was the son of Donald and Marilyn Fisher, born on screen in February 1999 by caesarean. Marilyn had been under anaesthetic during the birth and so had trouble bonding with him. She suggested naming him Vincent after Vinnie, who had taken her to hospital when she went into labour. Don baulked at the idea, accepting Vincent as a middle name instead, and Marilyn instead suggested Byron. Suffering from post-natal depression, Marilyn disappeared and Don hired Ellen Porter as a nanny. Marilyn returned after two months and Ellen helped her settle into looking after Byron before leaving.

Marilyn made plans to have Byron christened with Travis and Rebecca as godparents but she and Donald clashed over whether to have an Anglican or Catholic baptism. They eventually decided to just bring him up right and let him make his own choices, making promises to him in an inpromptu private baptism in the sea. Marilyn was worried about placing Byron in a care centre when she and Donald returned to work, but had come round to the idea by the time Donald took him out early on his first day.

For the next few months, Byron was occasionally seen with his parents. However, when he was six months old, he was diagnosed with liver cancer which had also spread to his lungs. Don and Marilyn saw a doctor in the city who advised them to begin chemotherapy right away, but an overwhelmed Marilyn refused to allow Byron to start treatment before she had got her head around everything that was involved. Blaming herself for Byron’s illness, seeing it as punishment for abandoning him when she had post-natal depression, Marilyn decided she wanted to take him to a prestigious private clinic in the United States for specialist treatment.

Colleen organised for Marilyn and Byron to stay with her cousin Charlie in Seattle, and Donald would stay for two weeks before returning to Australia, the couple having decided they couldn’t afford to both stay out there. With Donald’s estimate for the cost of the trip being in the region of $200,000, he reluctantly accepted $10,000 from film director Roger Lansdowne, in return for relinquishing all input into the film adaptation of his late son Alan’s book On the Crest of a Wave. The night before Donald and Marilyn departed, Sam told them that he and his friends had decided to hold a fundraiser for Byron. Donald confided to Irene that he was not keen on the idea, not wanting to be seen as a charity case, but she pointed out that Byron’s illness was affecting all who knew him.

After seeing Marilyn & Byron settled, Donald soon returned with the news that Byron seemed to be responding well, with the chemotherapy already having shrunk some of the tumour, and that they were planning surgery after the next course of treatment. Donald continued to raise funds by putting his beloved Streeton painting, an engagement present from Marilyn, up for sale in a gallery in the city. Shortly afterwards, Simon Broadhurst, the husband of Donald’s former charge Angel, paid a brief visit to offer their help with providing funds, but Donald refused. The next day Donald was contacted by the gallery to say that his painting had been sold for $135,000. He was moved when he then found that not only had Simon been the purchaser, he had left the painting back in the Fisher house for Donald to find when he returned home.

A month later Byron took a turn for the worse, and in Episode 2753, Donald received the news that Byron had died as the result of an infection. Just before leaving to head back to the US, Donald was informed that Marilyn, who had been put under sedation following Byron’s death, had again gone missing. On his arrival, he learned that Marilyn had grown close to one of the hospital chaplains, Father MacGuire, and she had asked if he would perform a service if anything should happen to Byron.

Respecting an absent Marilyn’s wishes, Byron was laid to rest in the US with only Donald, and Colleen’s cousin Charlie, in attendance. Donald described the service as beautiful, held on a snowy day with a mass of flowers from everyone at the hospital who knew Byron.

On his return home, Donald received a letter from Marilyn, explaining that it would be too painful for her to return to Australia and be reminded of the happy life they had with Byron, effectively ending their marriage.

Byron’s death continued to affect Donald a lot. Shortly after Byron’s diagnosis, Donald had begun to write a children’s book—A Letter to Byron—dedicated to his son. After much convincing from his neighbour Edward Dunglass, he eventually chose to publish the book, with illustrations by Hayley Smith. Donald and Hayley later travelled to London in 2001 to attend a book launch there, and whilst in the city, Donald was reunited briefly with Marilyn who found the book a beautiful tribute.

Shortly after her eventual return to Summer Bay in 2010, Marilyn began having dreams about Miles’ deceased daughter Rabbit. In one dream, Rabbit offered to introduce Marilyn to a friend of hers who was a bit shy. When Marilyn turned around she saw Byron, who greeted her, at the age he would have been if he’d survived.