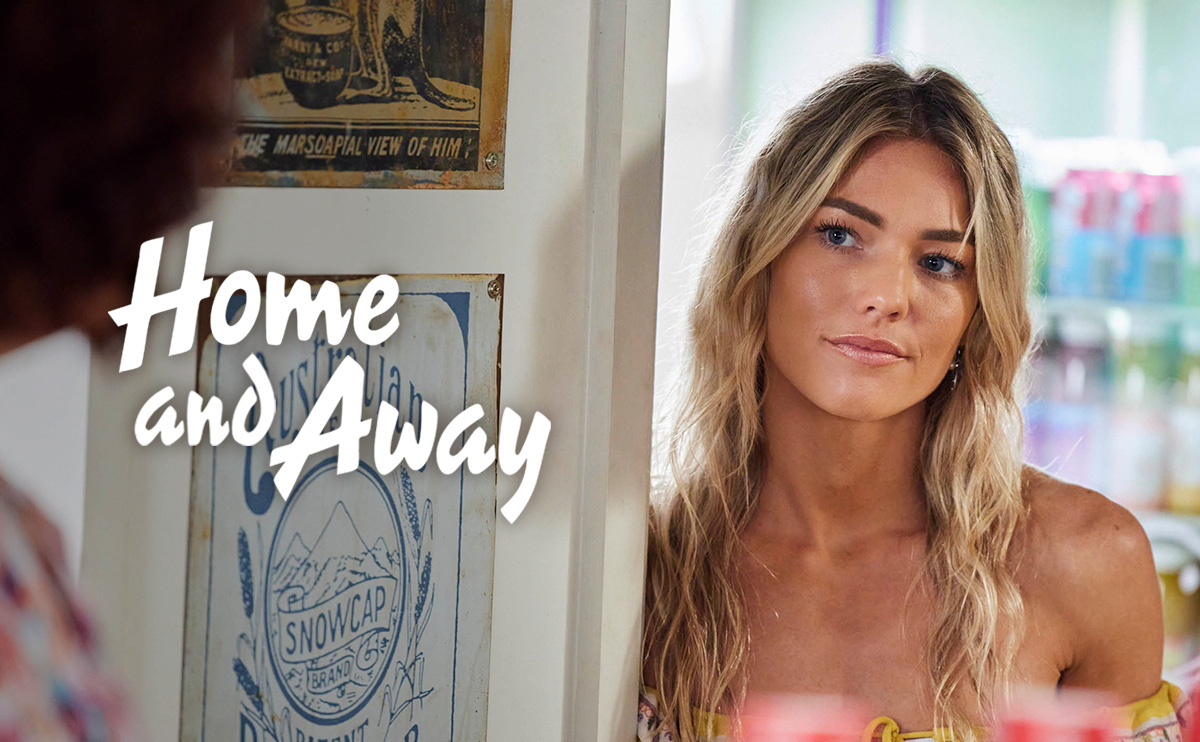 On next week’s Home and Away in the UK, Jasmine and Cash’s turbulent relationship continues, as her hot new fling starts getting texts and calls from a mysterious woman. Does she have something to worry about? 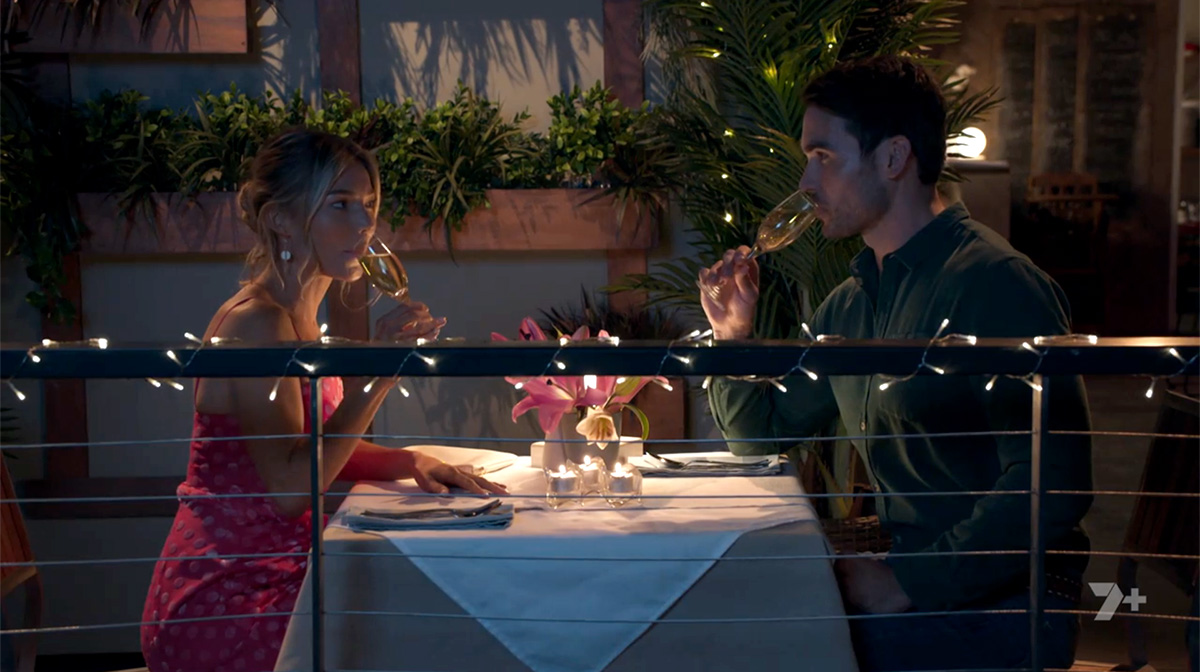 Last week saw Jasmine (Sam Frost) and Cash (Nicholas Cartwright) enjoy their first date together, which itself was the result of weeks of effort by Cash to win over a reluctant Jasmine.

Yet who;e the date was a roaring success, as we head into next week, Jasmine is confused when she doesn’t hear anything from the hunky new cop. It’s been days and she hasn’t even received a single text! 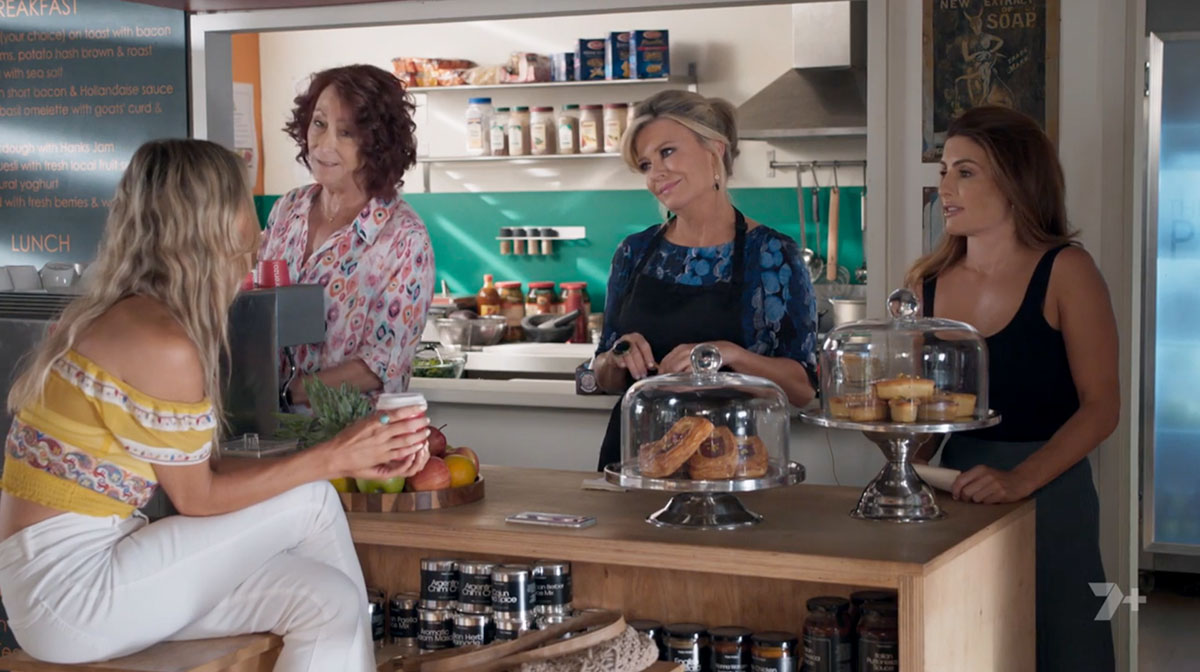 When she downloads to the Diner ladies, she admits that it was only one dinner, but she can’t understand why Cash would push so hard for a date, then not even text her to say “thanks, but no thanks”.

“I didn’t even want to go on the date in the first place,” she laments. 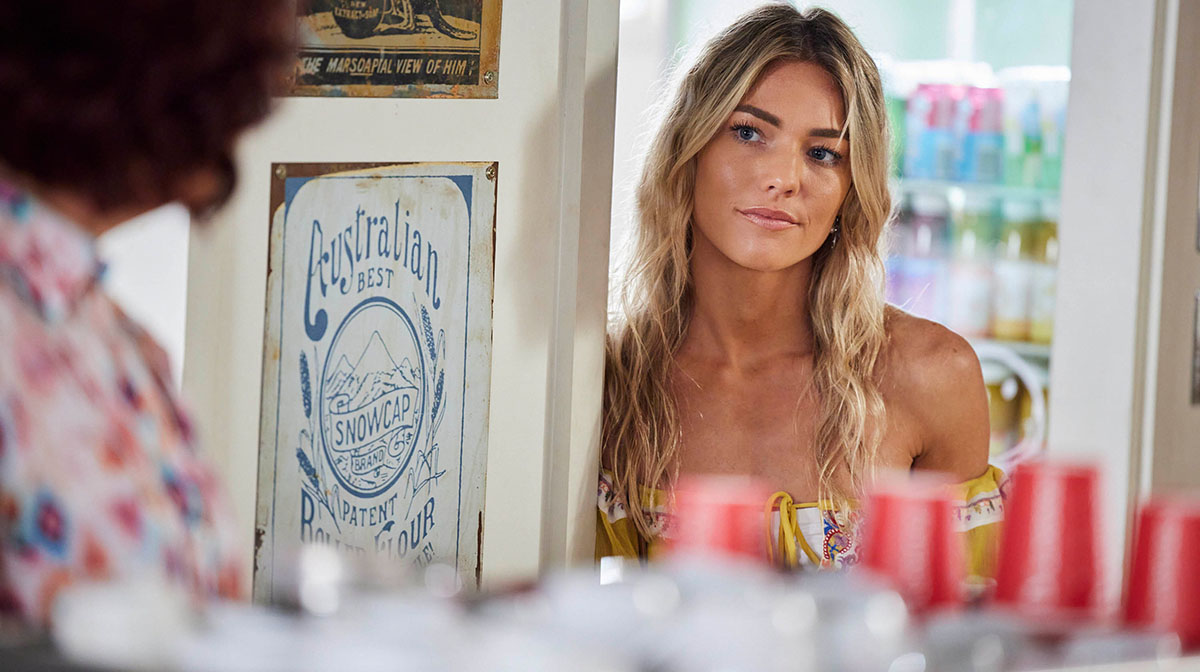 When Irene finds Jasmine still moping around the diner a while later, she gives her some advice. Rather than spending the morning fretting over Cash as she sorts the gym paperwork, why doesn’t she take the initiative and get in touch with him herself?

“Well, what if he’s playing games?” questions a concerned Jasmine.

“What if he isn’t?” Irene points out, not wanting her to throw away the opportunity. “This is the 21st century, not the dark ages. If you like the bloke, pick up the flipping phone.” 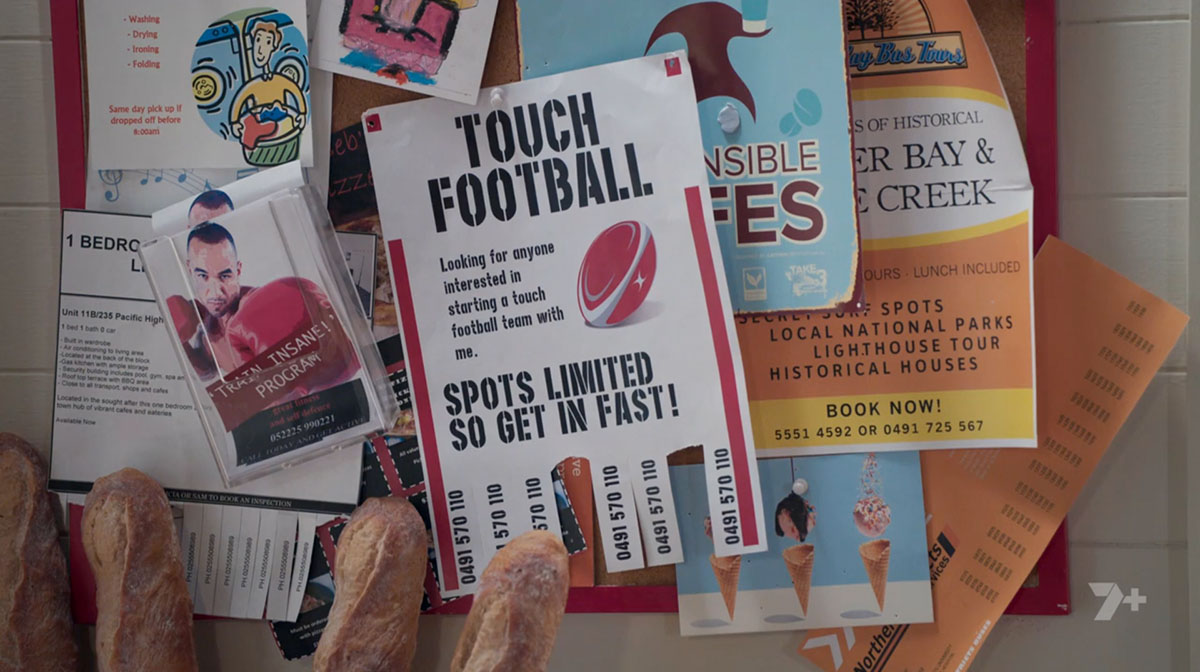 When Jasmine points out that she doesn’t even have Cash’s number yet, Irene is one step ahead as usual. She points to the touch footie notice that Cash stuck up, which has his phone number right there.

With nothing standing in her way, Jasmine picks up her phone and gives him a call. However, while she thinks she’s being ghosted, in reality the cop is busy fighting crimes (or petty arguments) all across the Bay, and is currently in the middle of John and Justin’s fight over the garage ownership. 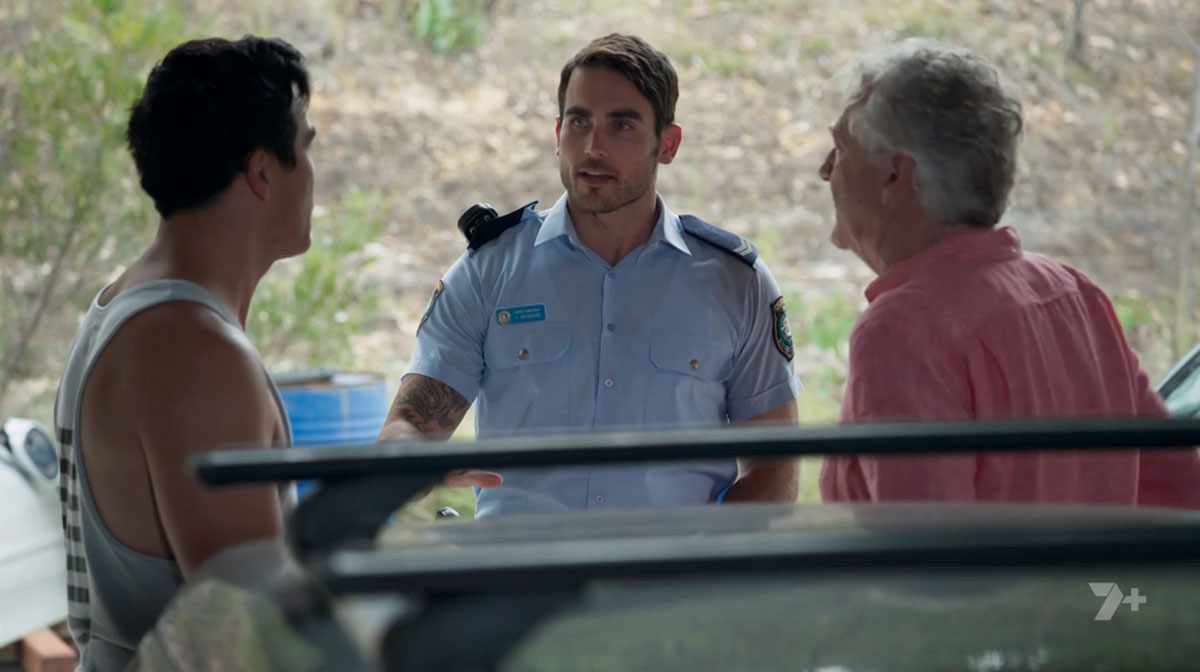 When he gets a call from a mysterious number, he rejects it so he can carry on mediating John and Justin’s drama.

So, when Jasmine finds herself sent to voicemail, she leaves him a spur-of-the-moment message that she may live to regret. 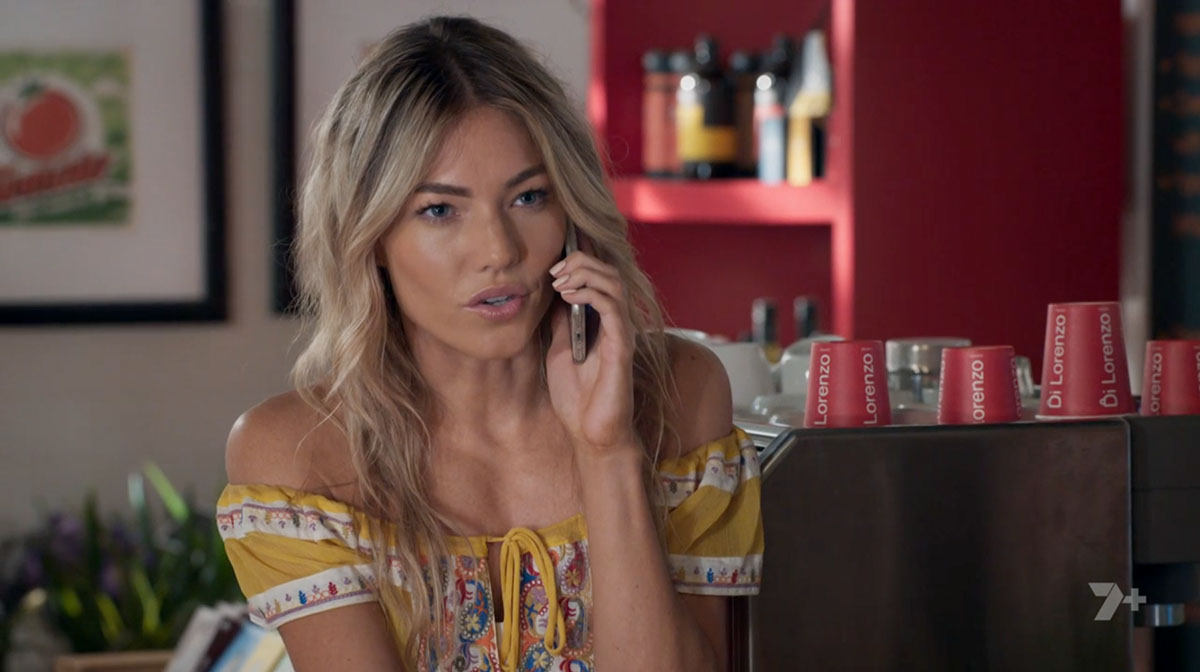 “Hey, Cash, it’s Jasmine. You know, the chick you’ve been ghosting all week?

“Yeah listen, I’m not interested in playing your little game any more, so thanks for the date and I guess I’ll see you around.” 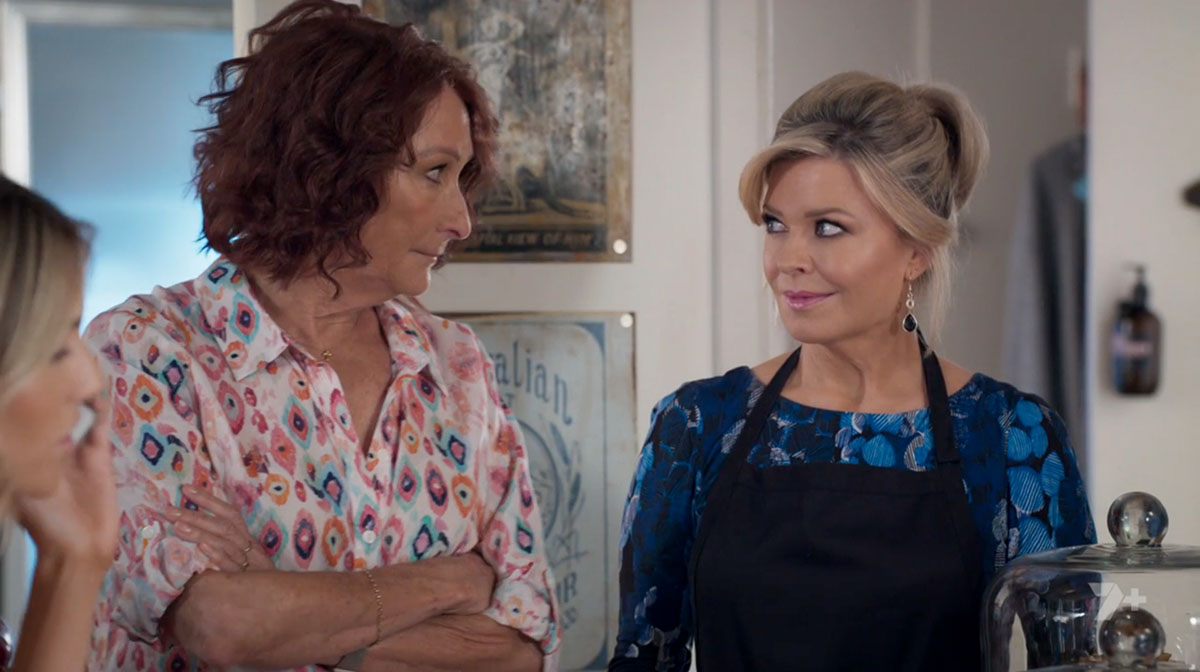 All Maz and Irene can do is look on in shock as Jasmine leaves the fiery voicemail and hangs up. 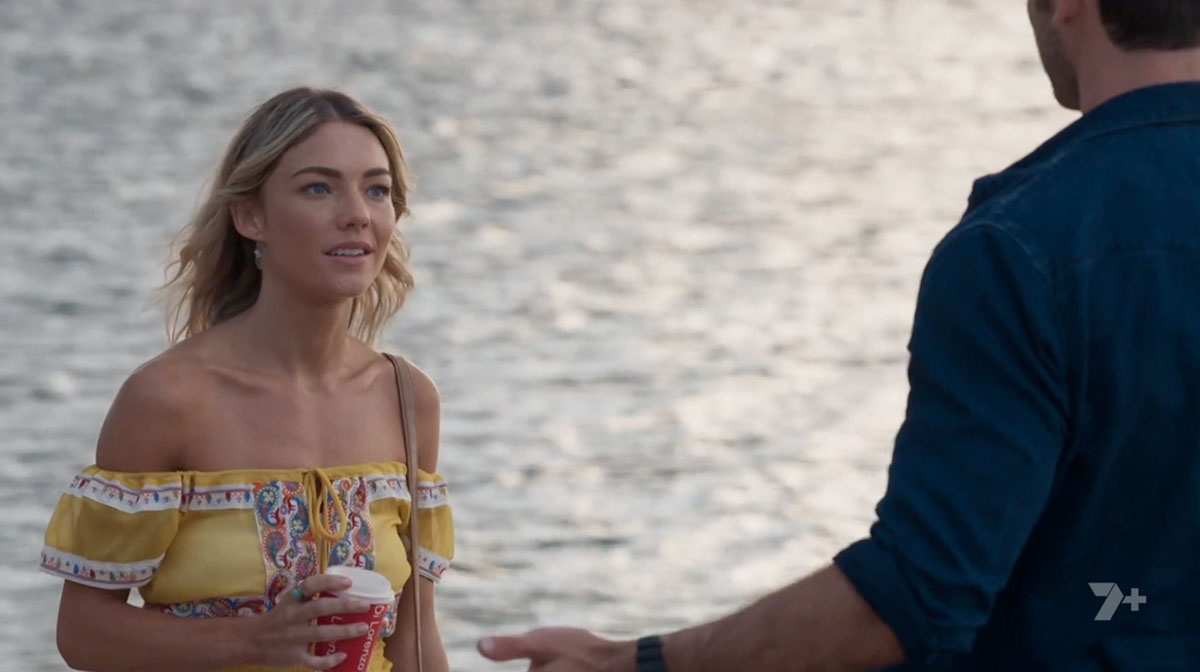 Of course, it doesn’t take long for her to regret her decision.

When Cash finally bumps into Jasmine on the beach, having been left completely blindsided by her message, he tries to find out what she’s done wrong. Yet all he can get out of her is a “nothing, you’ve done nothing,” before she walks off, telling him that this is crazy. 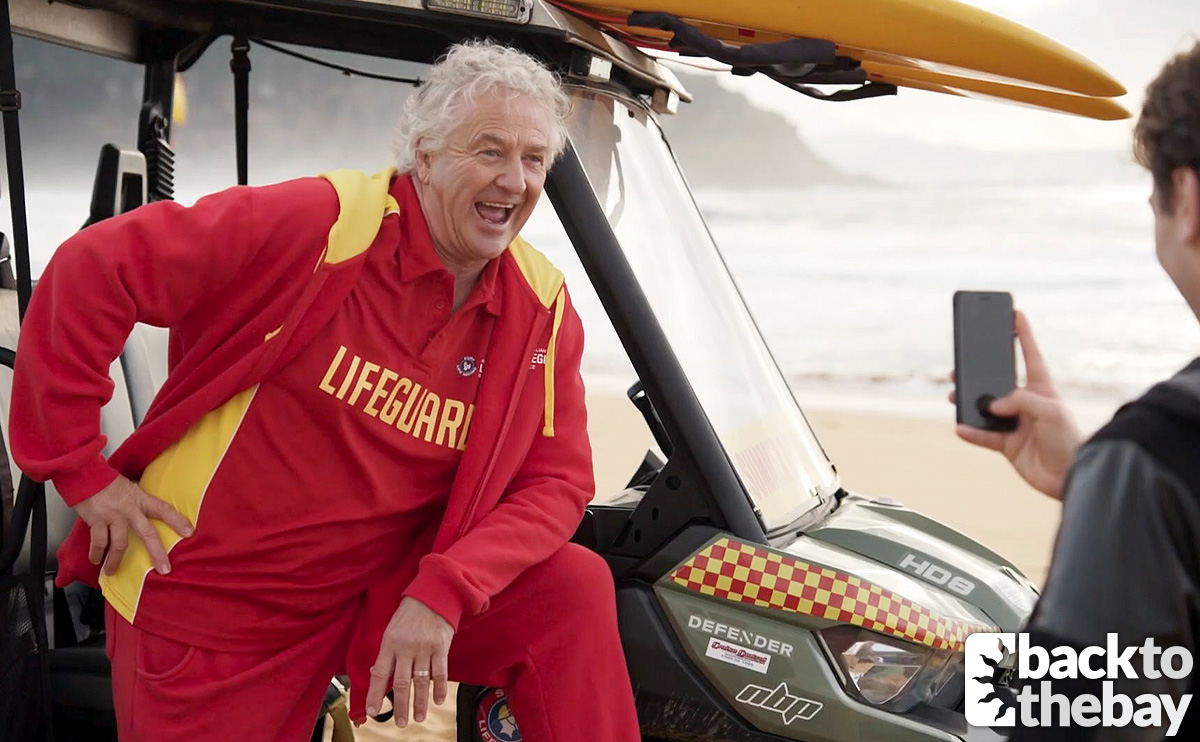 John posing for his Smoulder profile pic, with a little help from Rider

Following her to the surf club, he still can’t get an answer.

He confides in Summer Bay’s resident love expert John Palmer, and tells him that although sometimes he can be a bit thick when it comes to women, on this occasion he has no idea what he’s done.

He plays the voicemail back to John, and it’s only when Palmer asks him what ghosting means, that things click. “You’re a genius.” 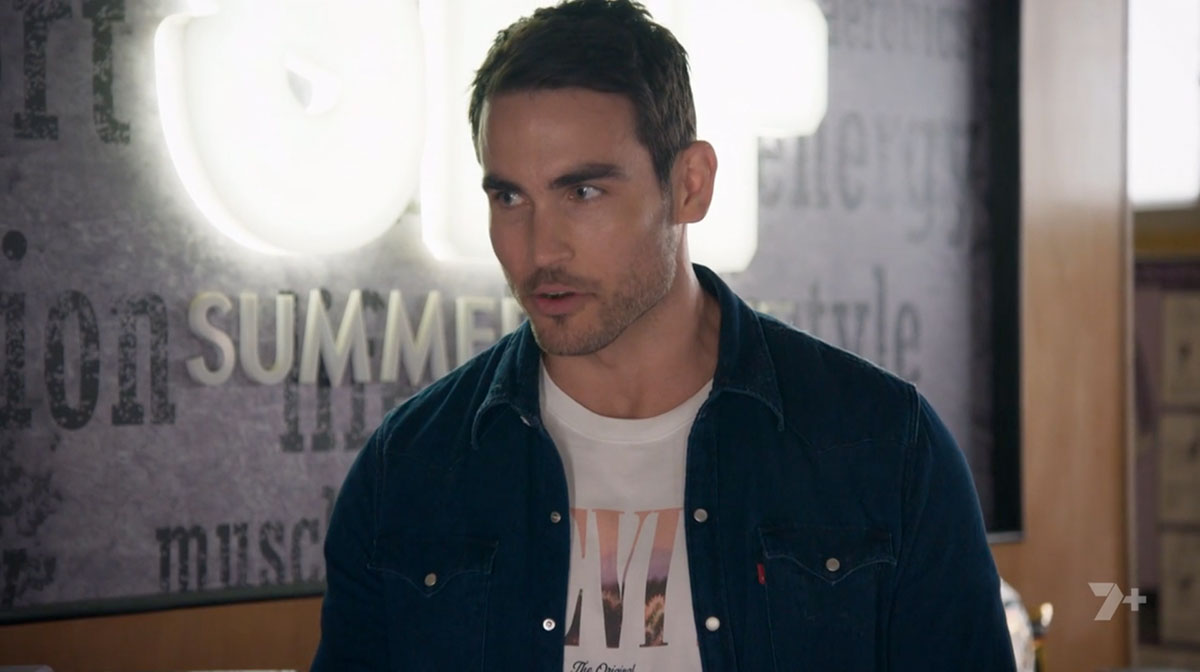 Finally knowing what he’s done wrong, Cash heads to the gym, ready give Jasmine an explanation. He clarifies that he hasn’t been ignoring her – Jasmine said that she was up for one dinner, and then all bets were off; he was simply trying to respect that.

“I didn’t want to be too full on, and I don’t have your number. I was hoping I’d run into you here, and, if I was lucky, you might wanna try for a second date.” 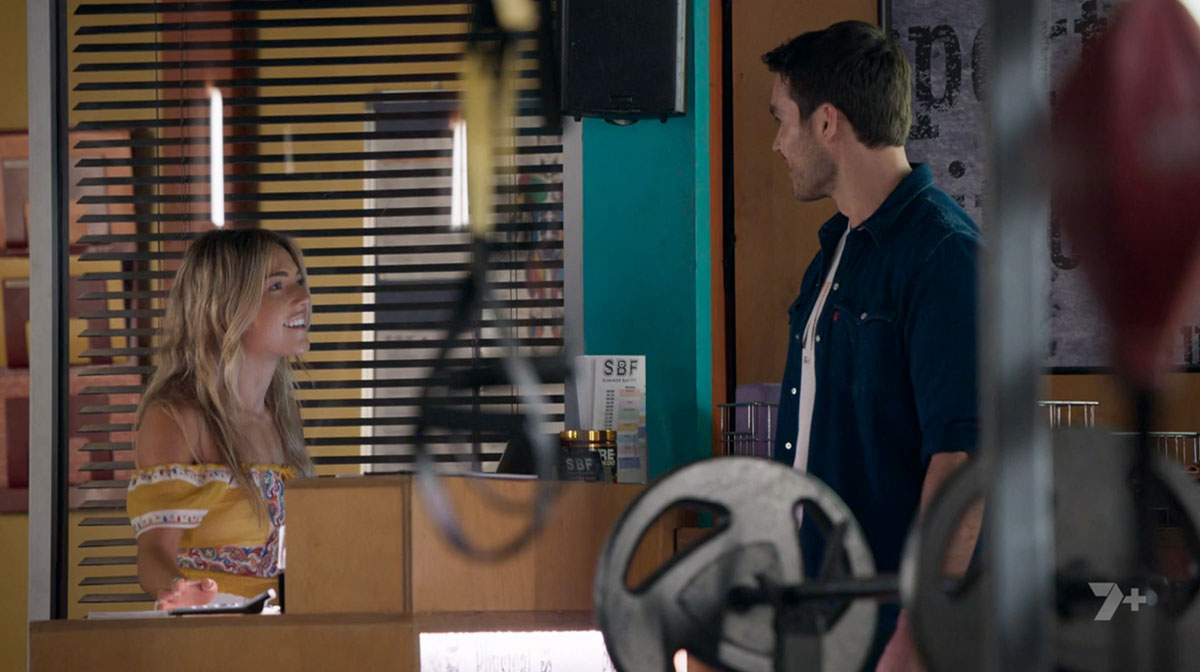 Suddenly, Jasmine is feeling very stupid. “That voicemail I left you…”

Thankfully, Cash can see past all of that. He deletes the message in seconds, assuring Jasmine that it doesn’t matter in the slightest.

With that awkwardness out of the way, they agree to grab a drink upstairs, and it seems like date #2 is officially on. 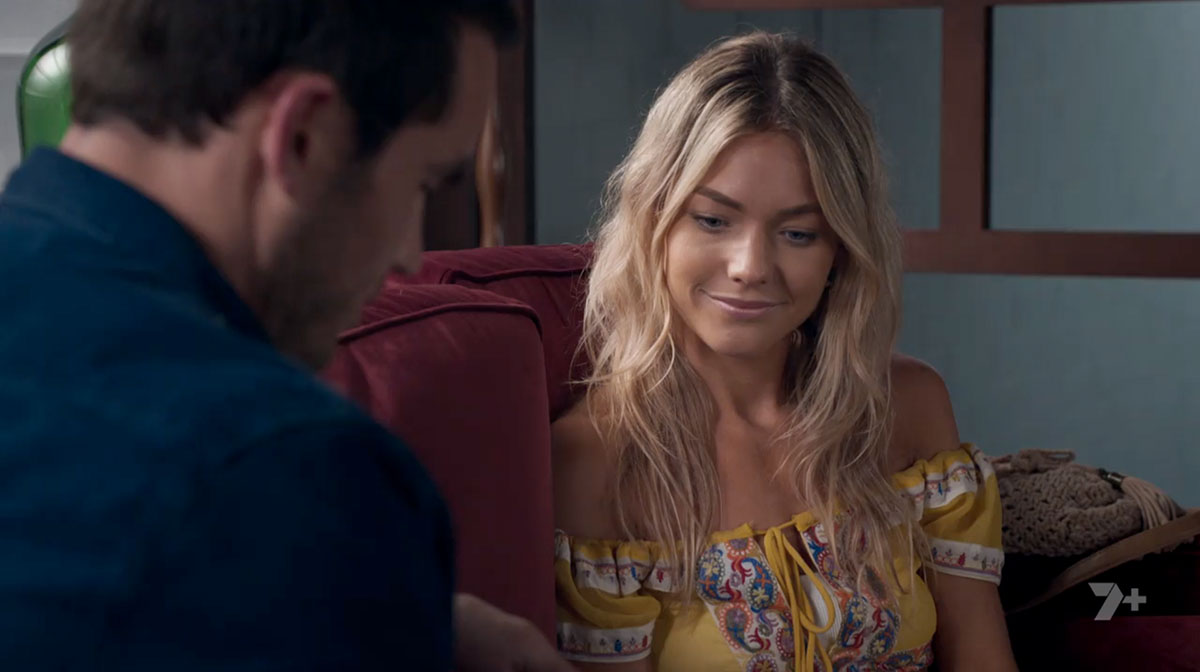 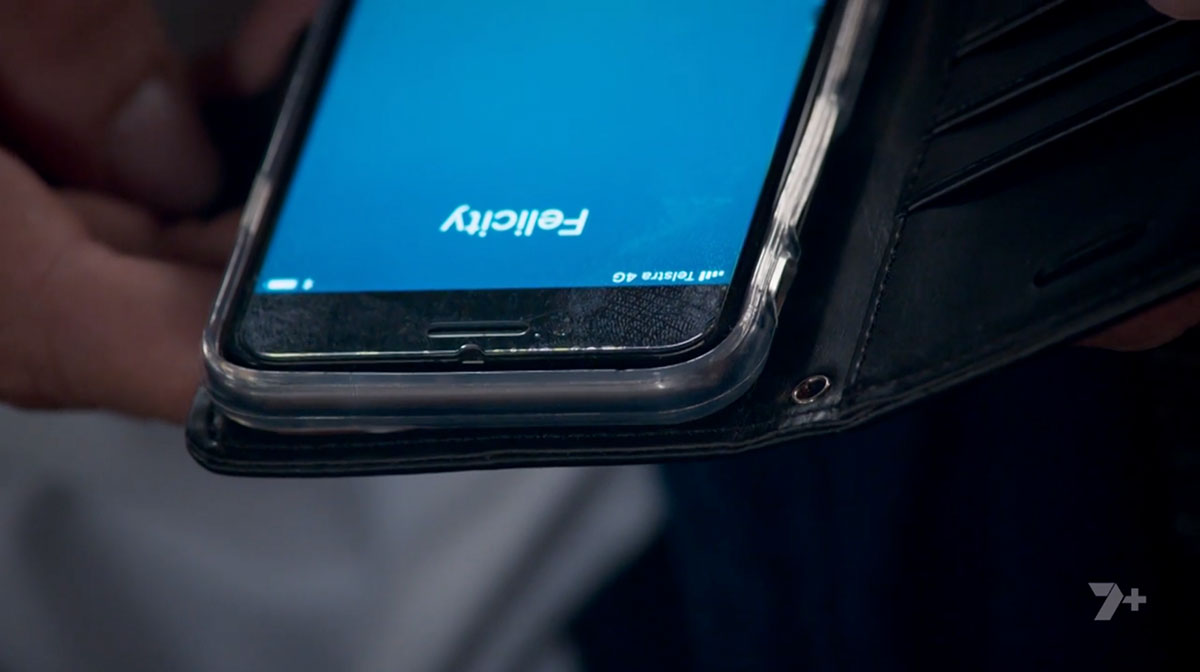 Yet as they share a drink together at Salt, Cash gets a phone call. The name on the screen is “Felicity”, a fact that Jasmine silently notes.

He rejects the call, but as they move to the balcony and are about to share a kiss, he gets a text – the same mysterious Felicity. 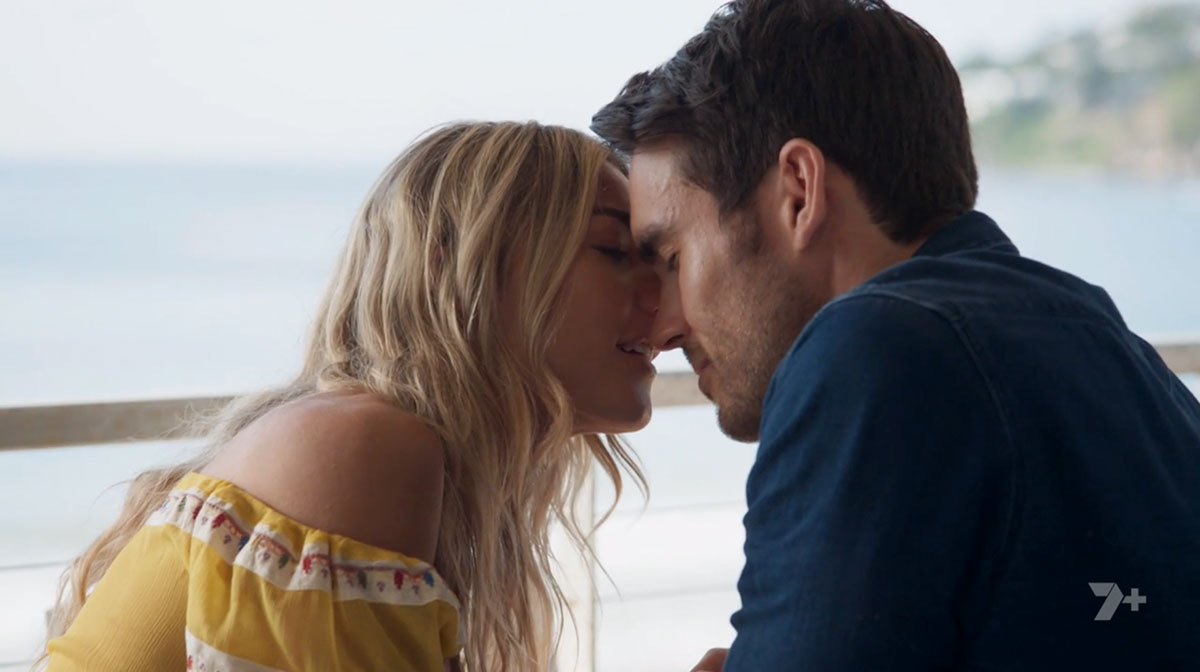 The contents of the message would be enough to concern even the most trusting of partners.

Just who is this mysterious woman blowing up Cash’s phone? Is Cash really playing Jasmine already? 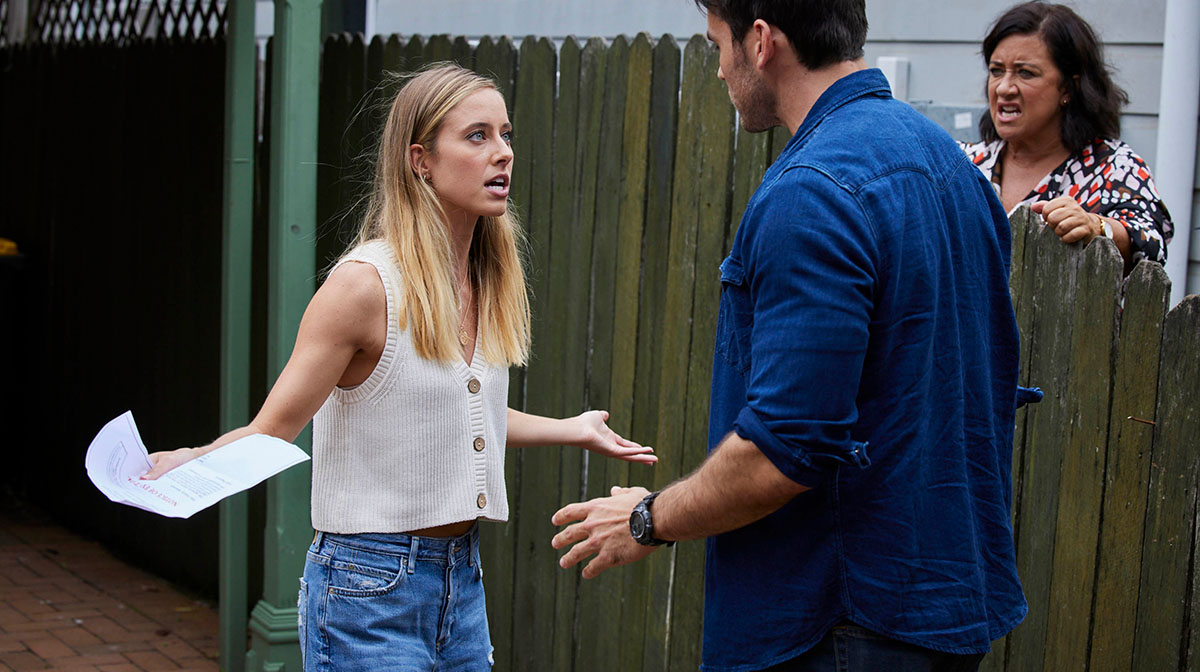 Just who is Felicity?

Leah and Justin receive some unexpected news. Ari changes his priorities. Jasmine and Cash have an extra guest for lunch.

Justin and Leah celebrate the returned money, though John has other ideas. Bella is left devastated by Nikau’s misguided attempts to make things right.

Mackenzie makes her feelings towards Logan known. Dean’s first steps to rehabilitation create a hurdle for him and Ziggy. Alf fights for Martha’s attention.