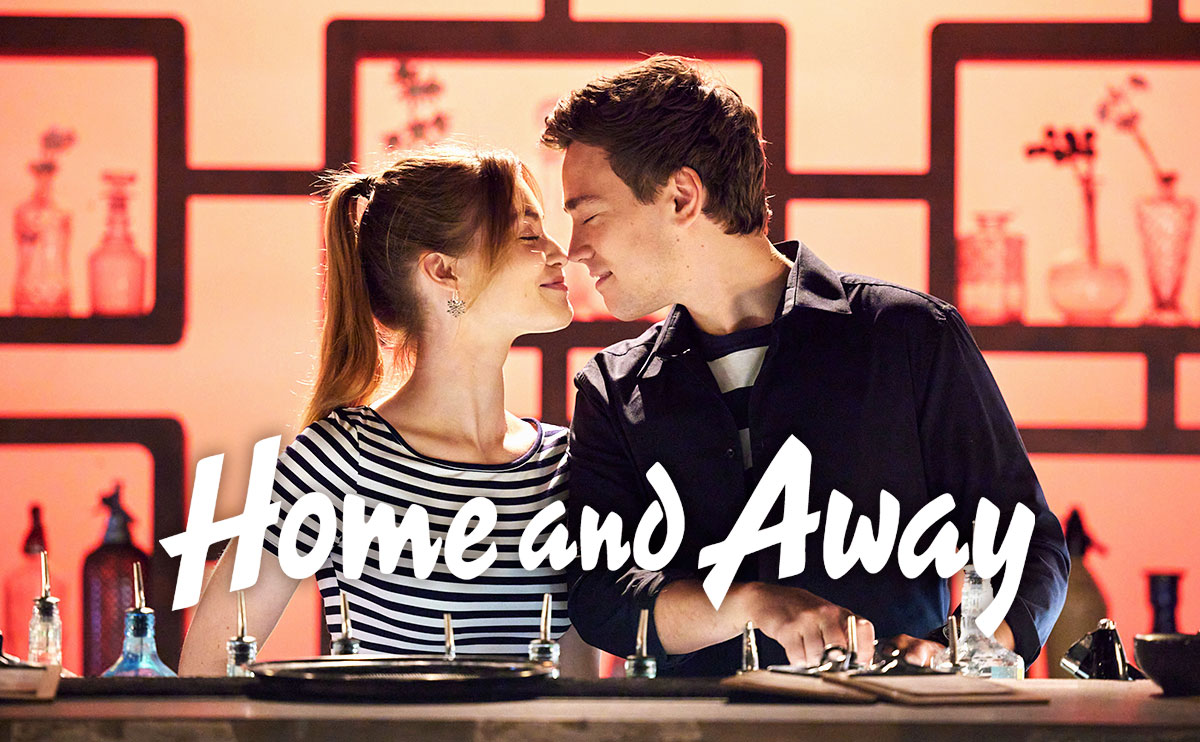 Coming up next week on Home and Away in the UK, Ryder finds himself stuck in the middle of Mackenzie’s rift with the Paratas as his boss asks him to fire his girlfriend. Things are about to get messy.

Since suffering an ectopic pregnancy last week and tragically losing her unborn baby, Mackenzie (Emily Weir) has been struggling. She was discharged from hospital and told to rest, but heading home to the empty farmhouse gave her too much time alone with her thoughts. 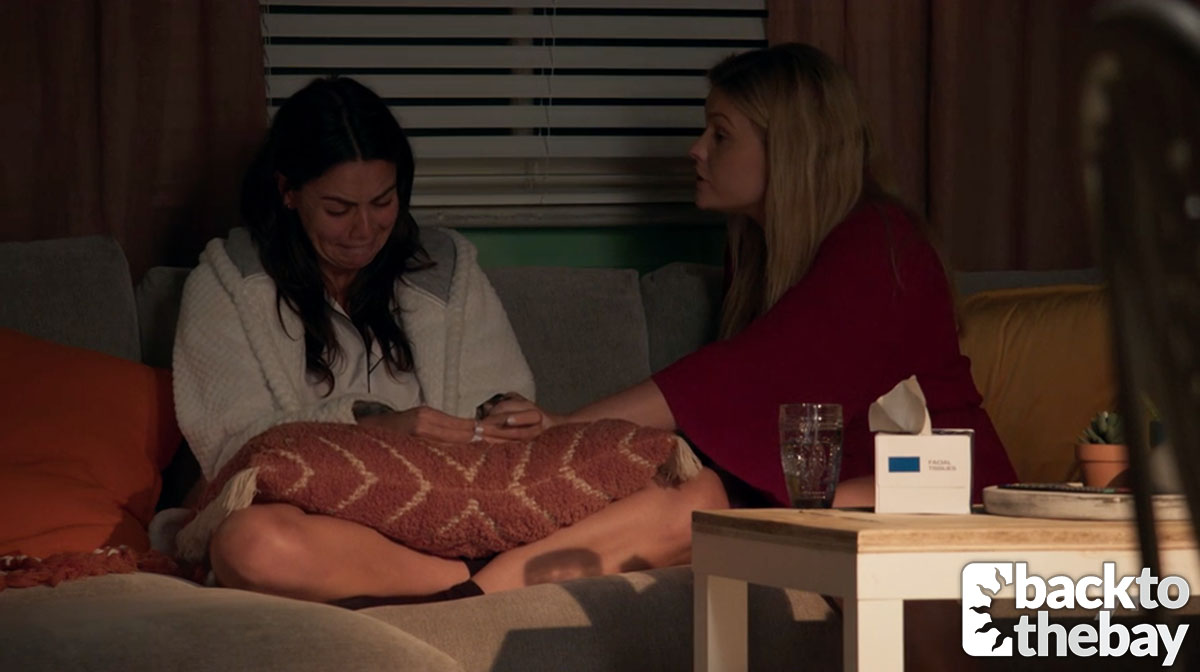 Even though she had never planned to go ahead with the pregnancy, she’s still grieving the loss of the baby. Having to do it on her own, when she still misses Ari (Rob Kipa-Williams) and is mourning their relationship, has made it so much worse.

After just a day of wallowing in the house, she decides to return to work. Although she reassures Ziggy (Sophie Dillman) that it will be light work – standing behind the bar, picking up a few empty glasses – it’s not long before it takes its toll on her body.

Meanwhile, Ari has no idea of what Mackenzie has been through, and is blissfully happy to be reunited with old flame Mia (Anna Samson). Yet living in such a small town means bumping into each other is unavoidable, and Mackenzie is soon forced to endure an awkward encounter with her ex as he pops to Salt with Mia and innocently asks her how she is.

It’s clear that a reunion with Ari and his new girlfriend is the last thing that Mackenzie wants, and she tries to escape to the terrace, looking all the more worse for wear with every passing minute. 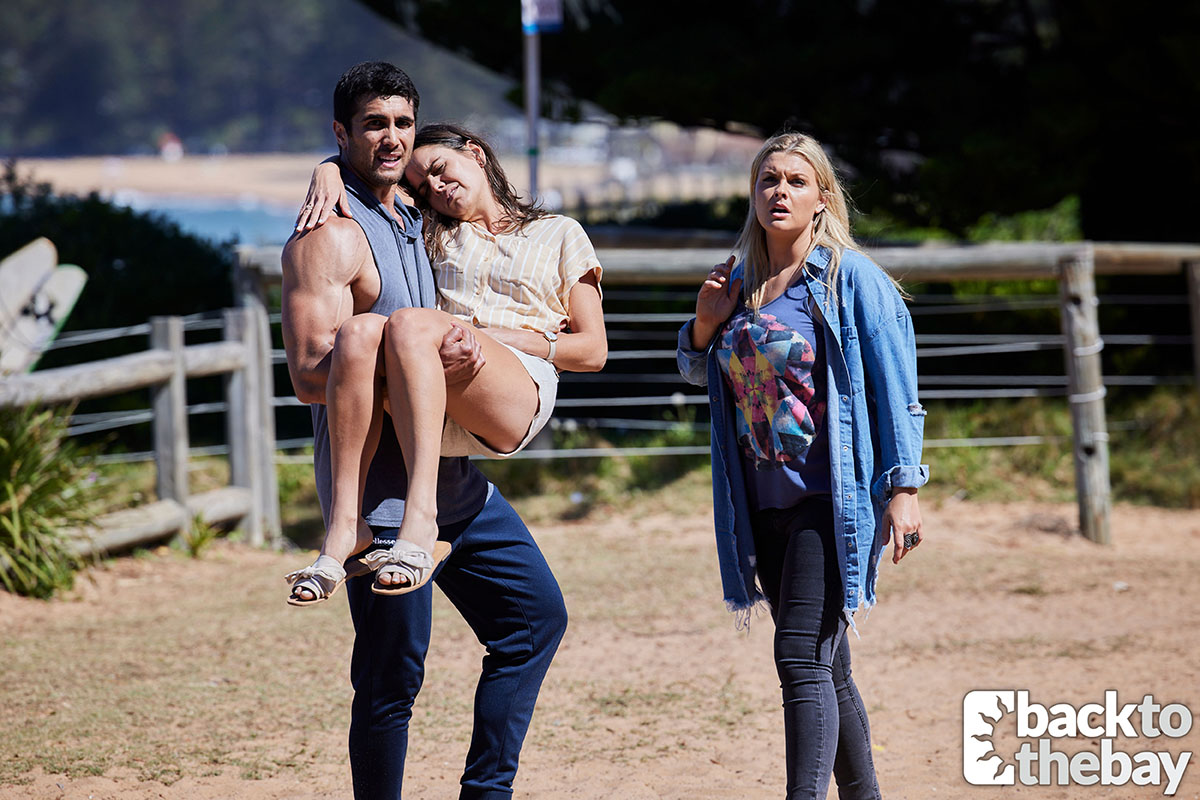 Knowing there’s no escape from the Parata family all becomes too much for her. In this Friday’s episode, as she walks down the stairs to the Surf Club, she passes out. Thankfully, Tane (Ethan Browne) catches her just before she hits the ground, and he and Ziggy (Sophie Dillman) rush her straight back to hospital. 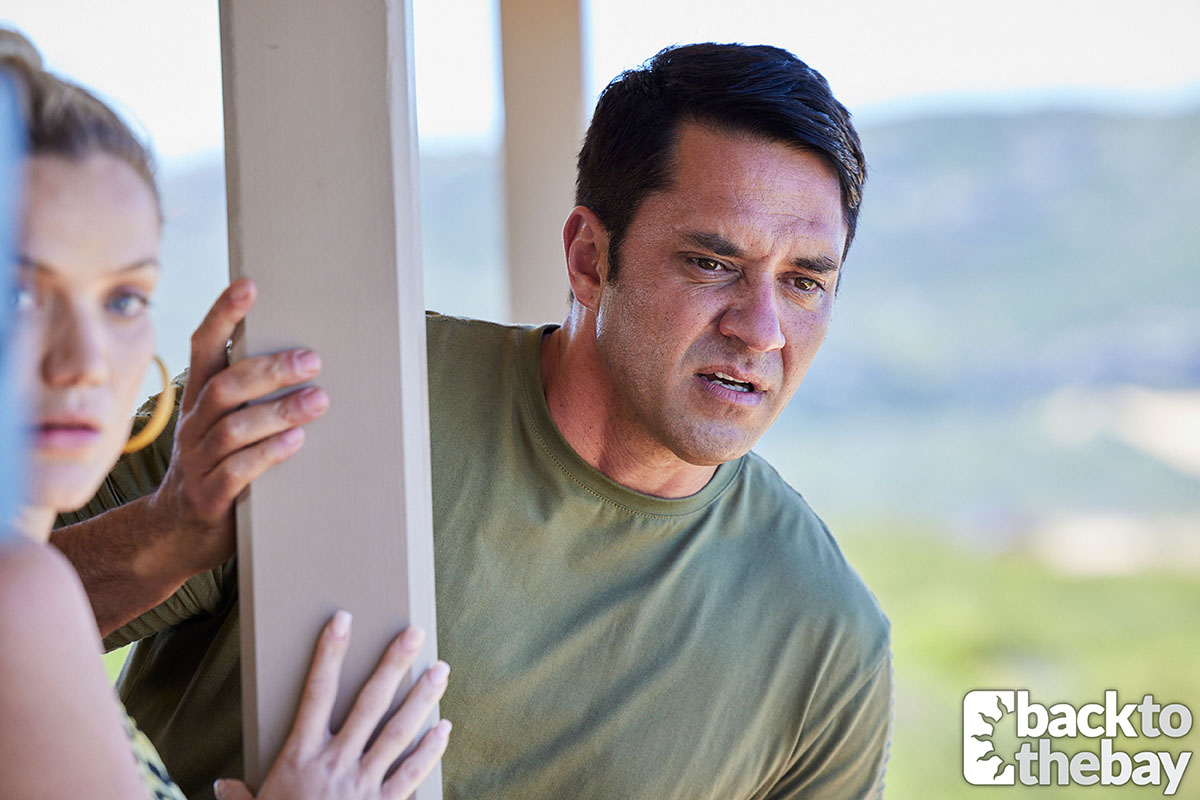 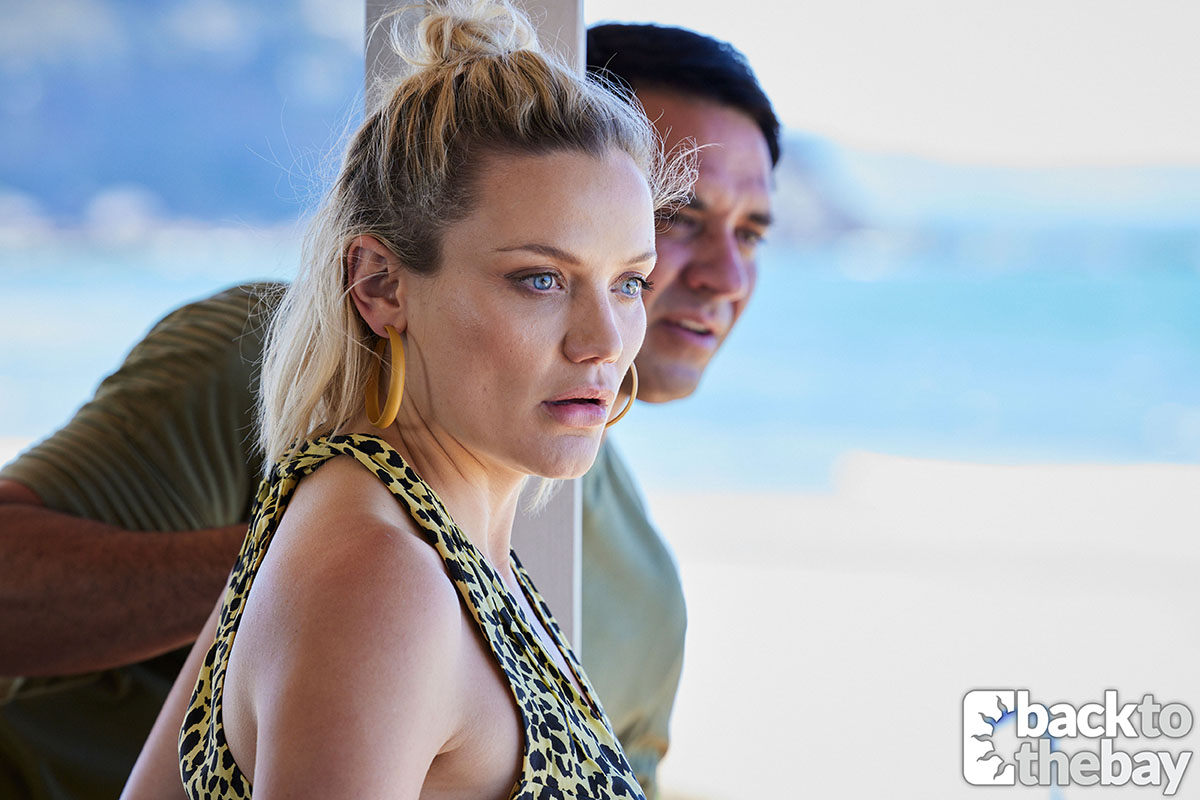 Unfortunately, on this occasion they’re not able to keep things secret from Ari. He and Mia are on the upper terrace of Salt as Tane carries her away, and Ari instantly knows that something’s seriously wrong.

Rejoining the action next week, Tane refuses to give up any info. Mia, who already discovered the truth of Mackenzie’s miscarriage when she witnessed her being taken into surgery last week, realises she has no choice but to give him the bad news. 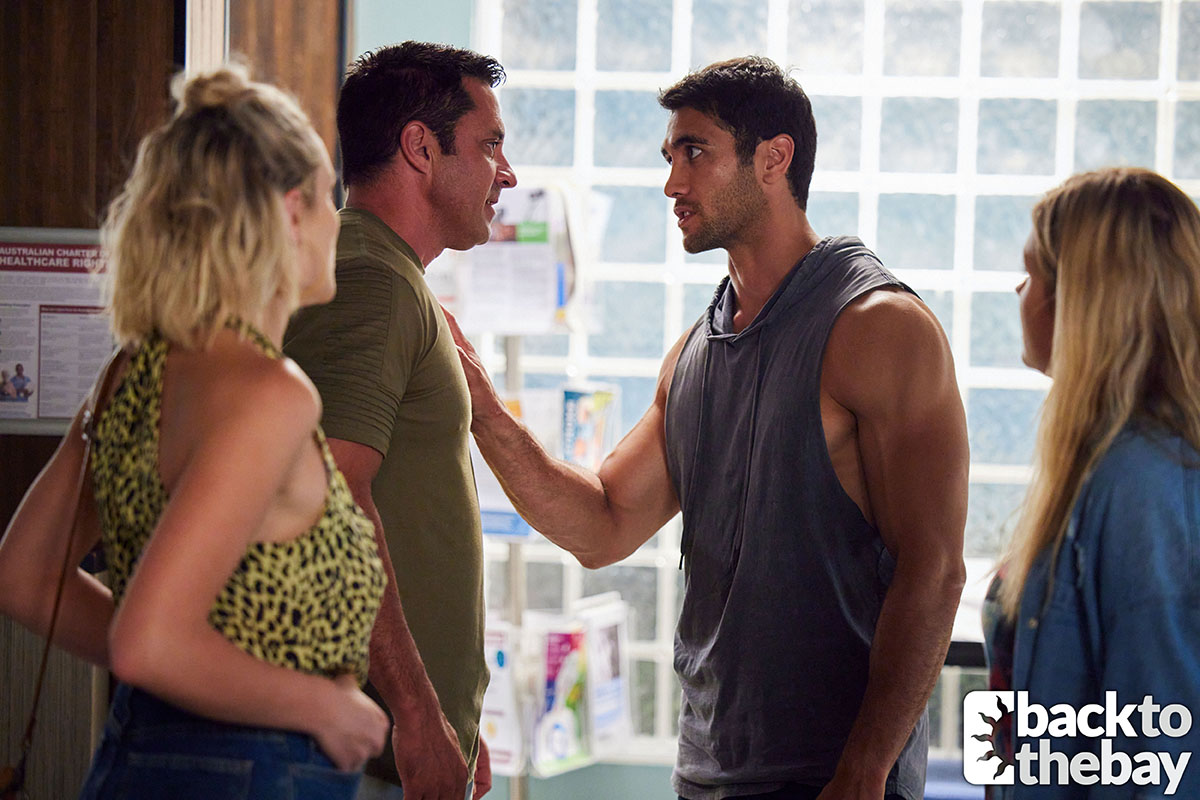 Ari is in shock, but while Tane was concerned that his brother’s past struggles with having children would cause the news to hit him hard, Ari’s first thought is for Mackenzie. They may have broken up, but he still cares for and can’t believe she had to deal with the pregnancy and subsequent miscarriage all alone. 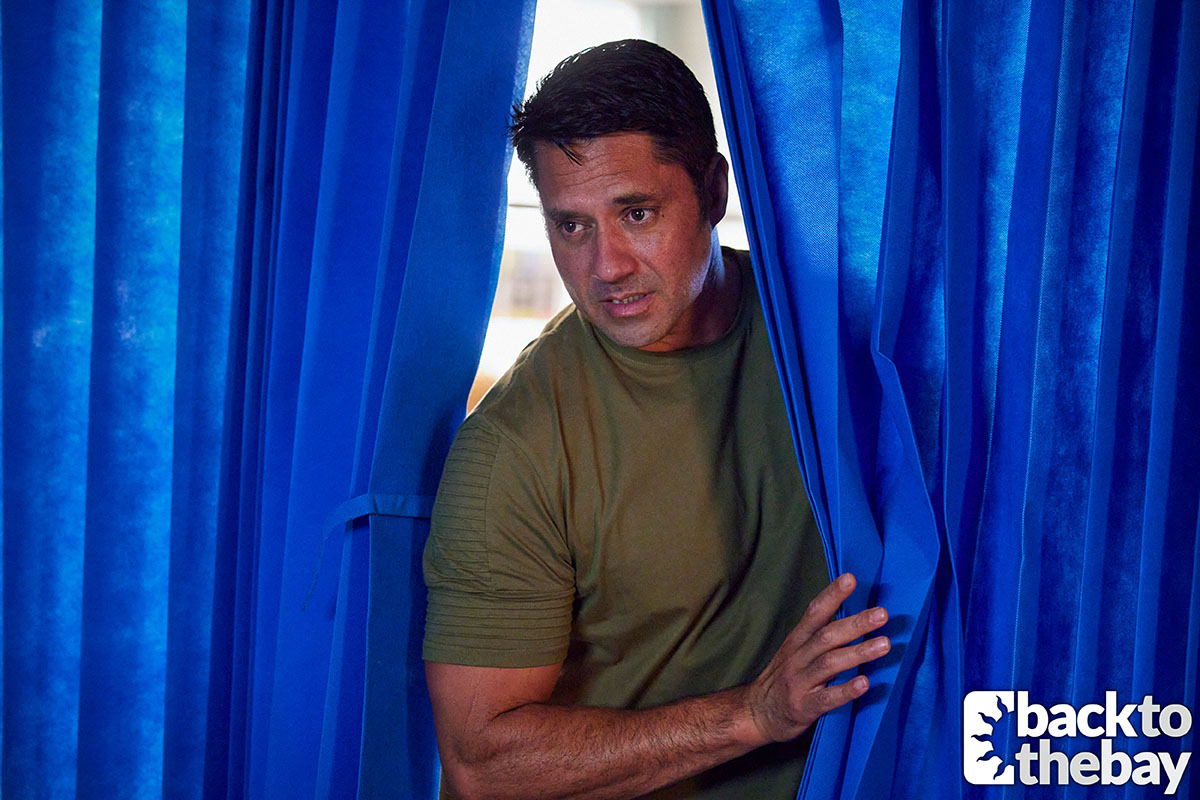 He pays her a visit in hospital, where she breaks down in his arms as he tells her he knows everything. 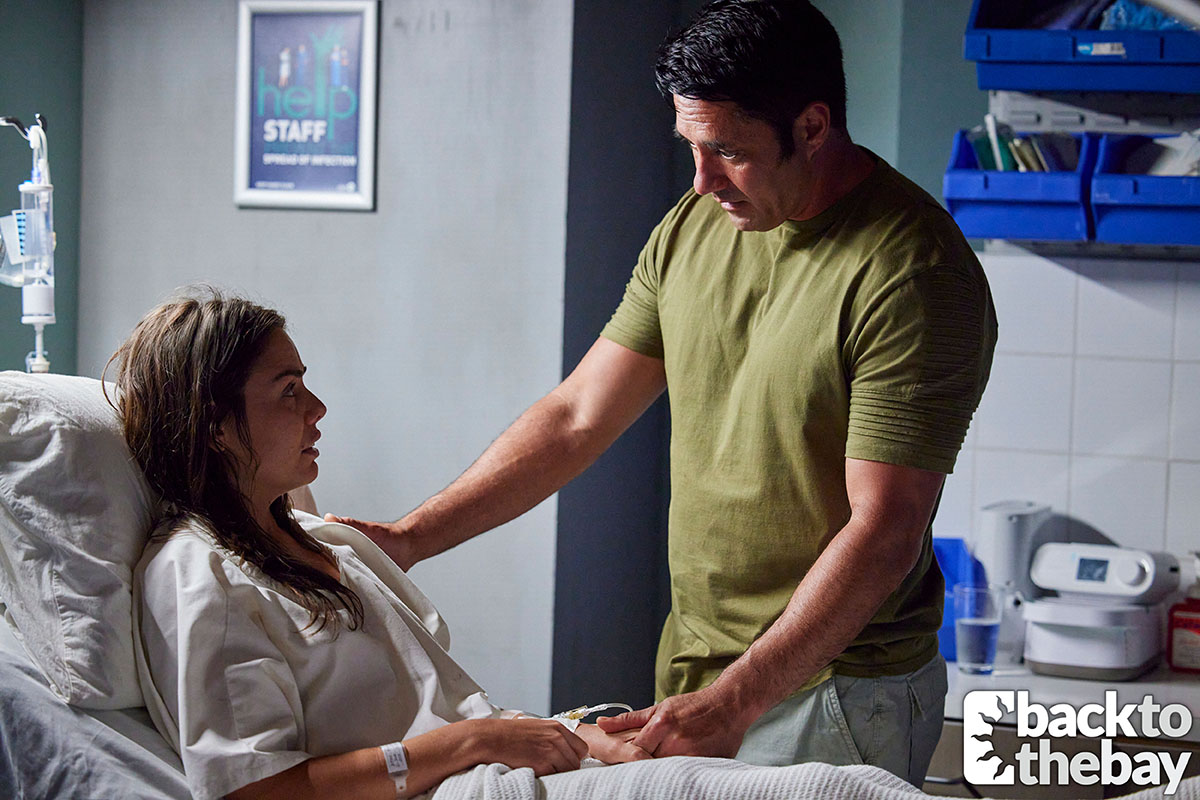 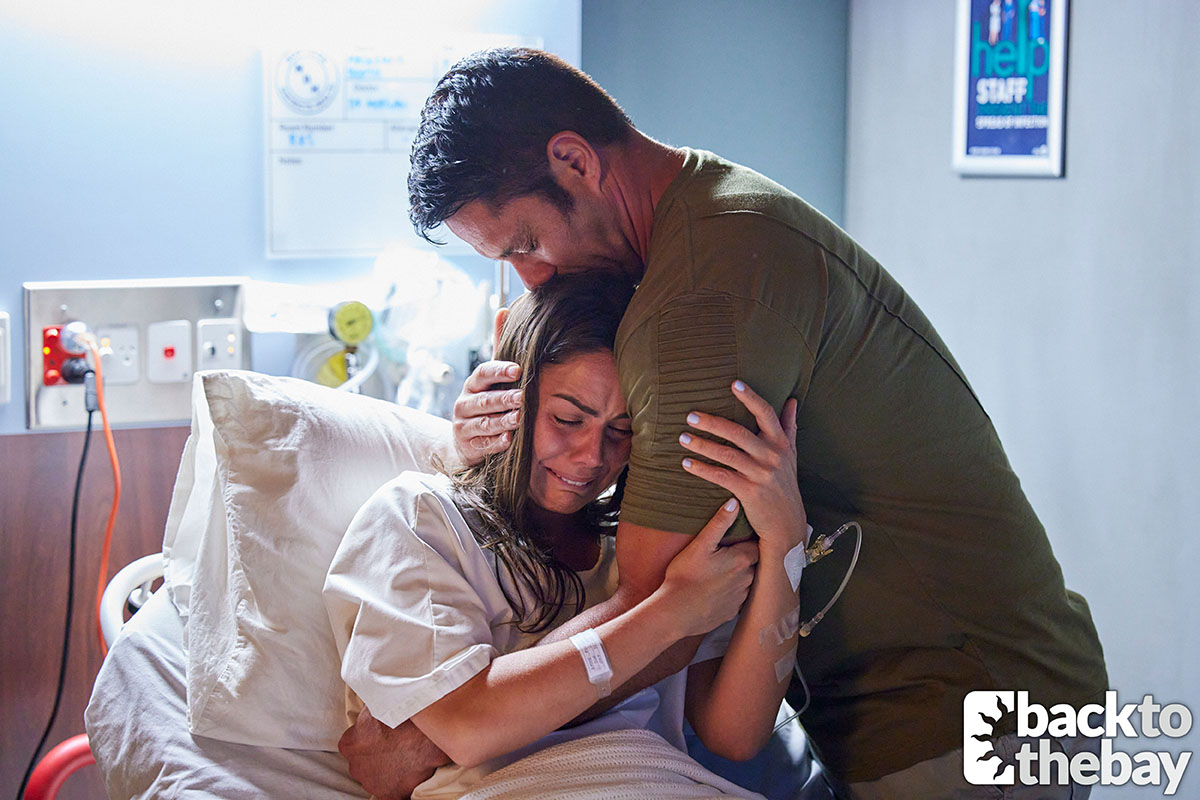 After they both get over the shock, the pair get on well for the first time in weeks, even managing to laugh and joke together. It finally feels to Mackenzie like she has someone to help ease her pain, someone who understands what she’s going through.

However, when they leave the hospital room and come face to face with Mia, it hits Mackenzie like a brick. She realises she’s heading back to an empty house while her ex-boyfriend gets to return home to his happy family. 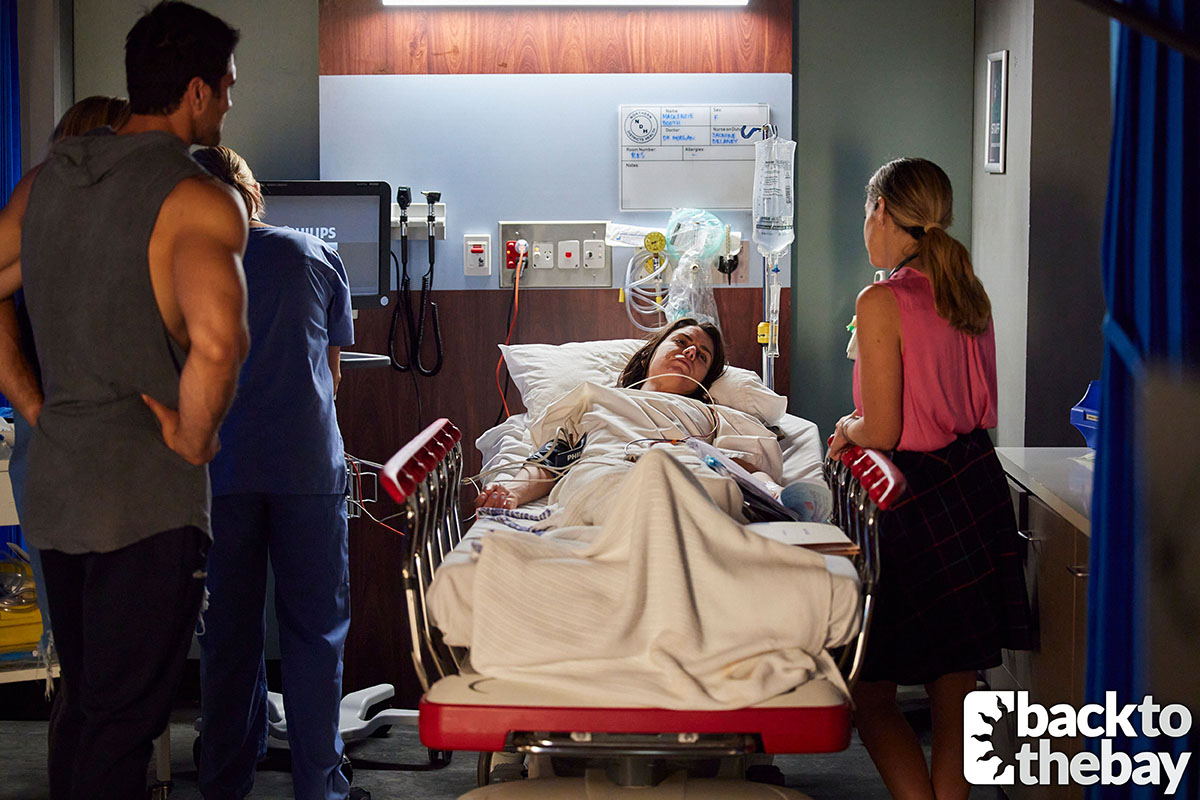 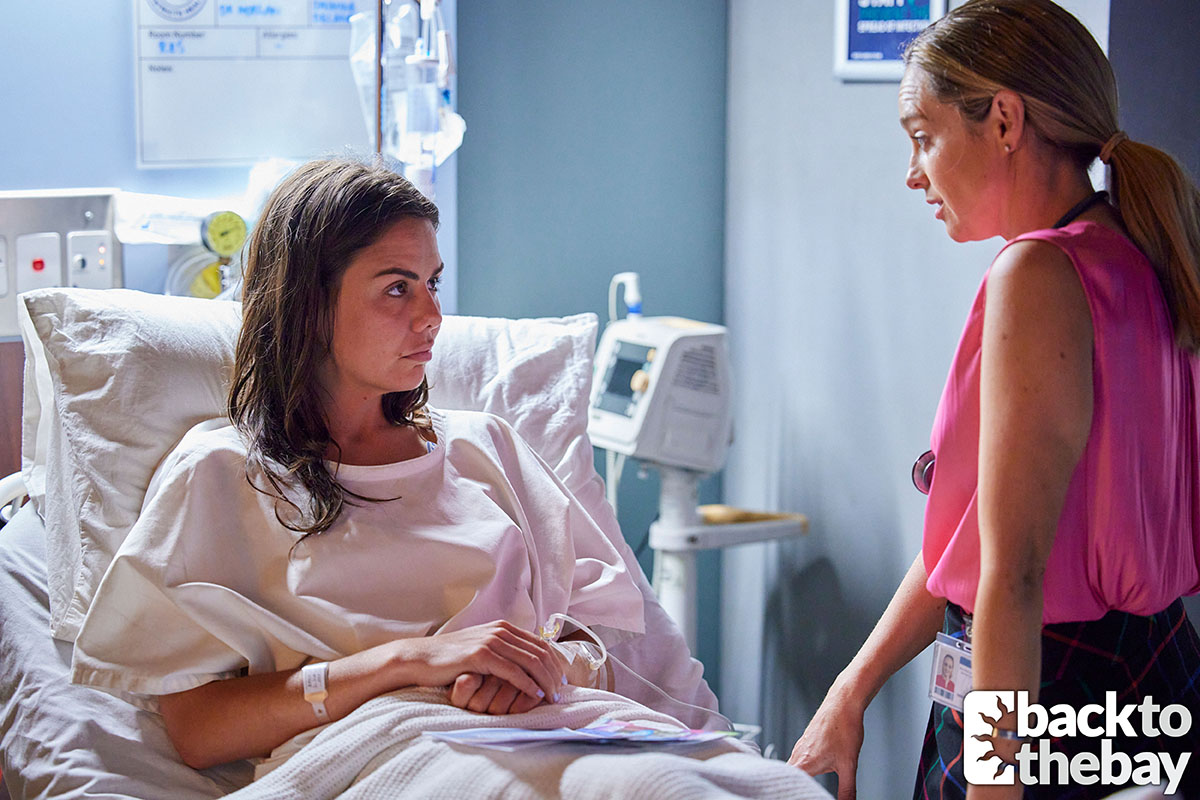 Tori gives her the diagnosis – she has a simple infection, probably caused from her overexerting herself by going back to work too quickly.

She heads home under strict orders to rest for at least the next two weeks… but even now that Ari knows the truth, she still feels completely alone. She spends days in tears, unable to find the strength to even move from the sofa.

She decides that if she’s going to move on with her life, she needs to make it a Parata-free zone. When she can eventually return to work, she doesn’t want to see Chloe there. Although Mia’s daughter hasn’t done anything, her association with Ari is enough, and Mackenzie wants her gone! 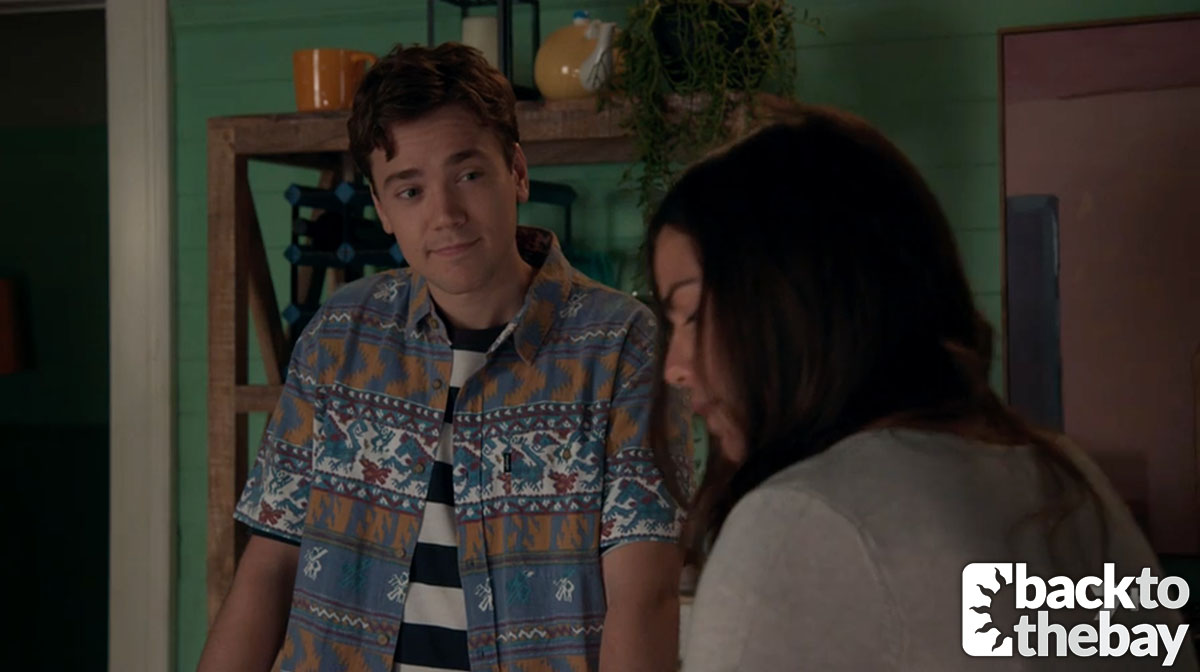 She invites Ryder to the farmhouse for a meeting. The two have always been friendly, with him lending her a shoulder to cry on before her eventually breakup with Ari, but right now she’s in no mood for small talk – she wants to talk business.

She offers him the chance to take on more responsibility by becoming her second in charge at Salt. He’s over the moon and tells her that whatever she needs, he’s there for her.

Yet he’s in for the shock of his life when his boss gives him his first task in his new role. He needs to fire Chloe! 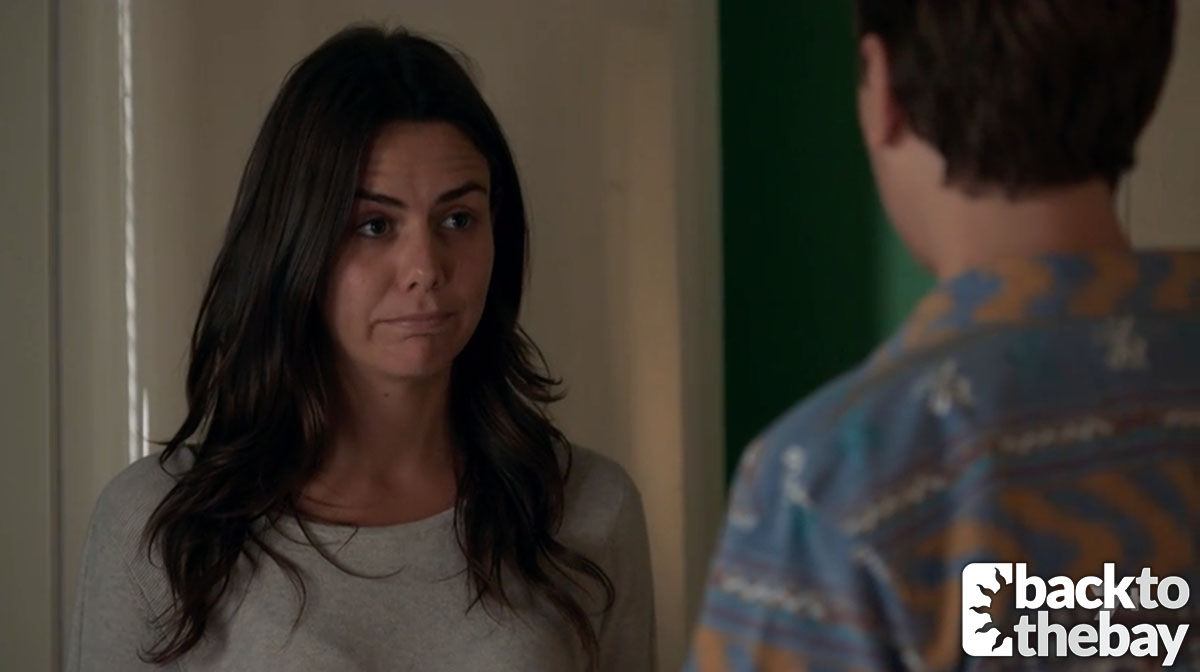 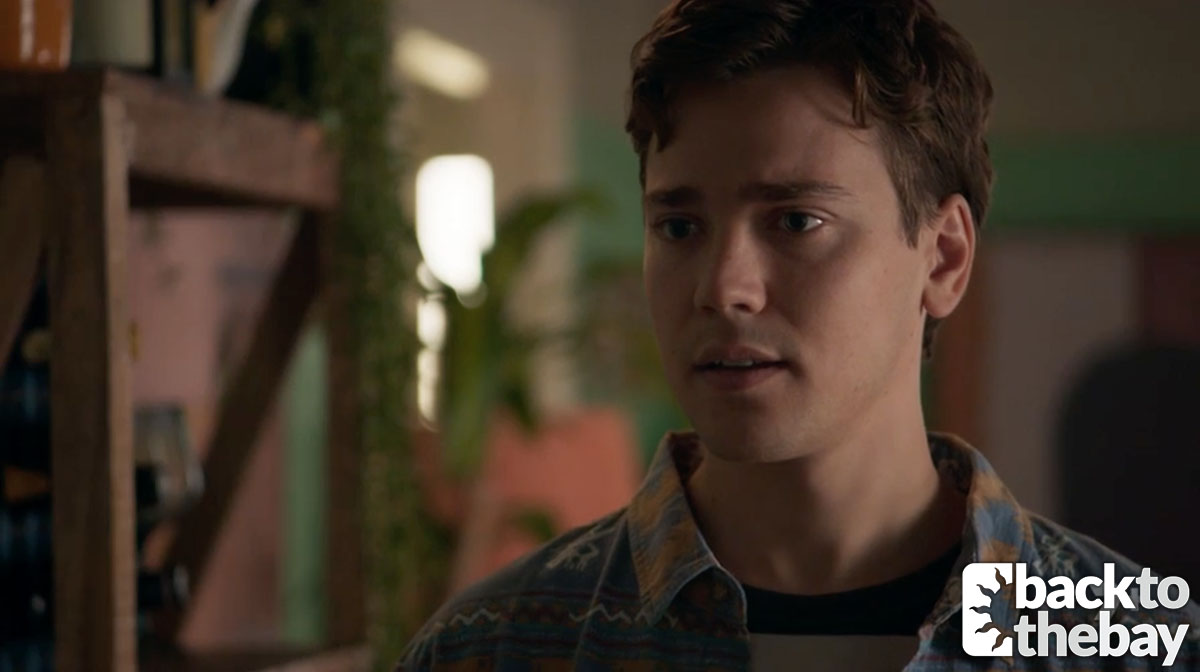 Of course, Mackenzie has no idea that Ryder and Chloe are now dating, so when Ryder protests and tells her it isn’t fair for her to give Chloe the sack, she can’t believe he’s talking back to her.

She explains that she just doesn’t want Ari’s step-daughter under her feet any more, and that’s all there is to it. “Either you follow my instructions, or I’ll find a second in command who will.” 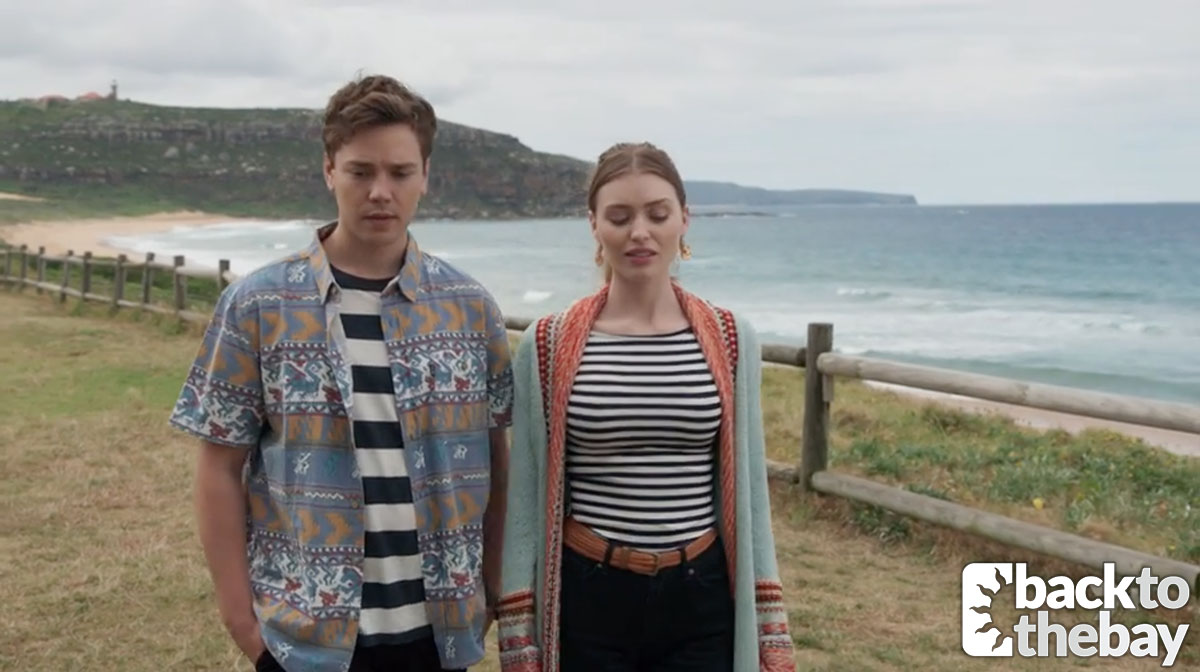 When it comes to it, poor Ryder just can’t bring himself to do it. He suggests to Chloe that they go for a walk, but the right words just won’t come out. 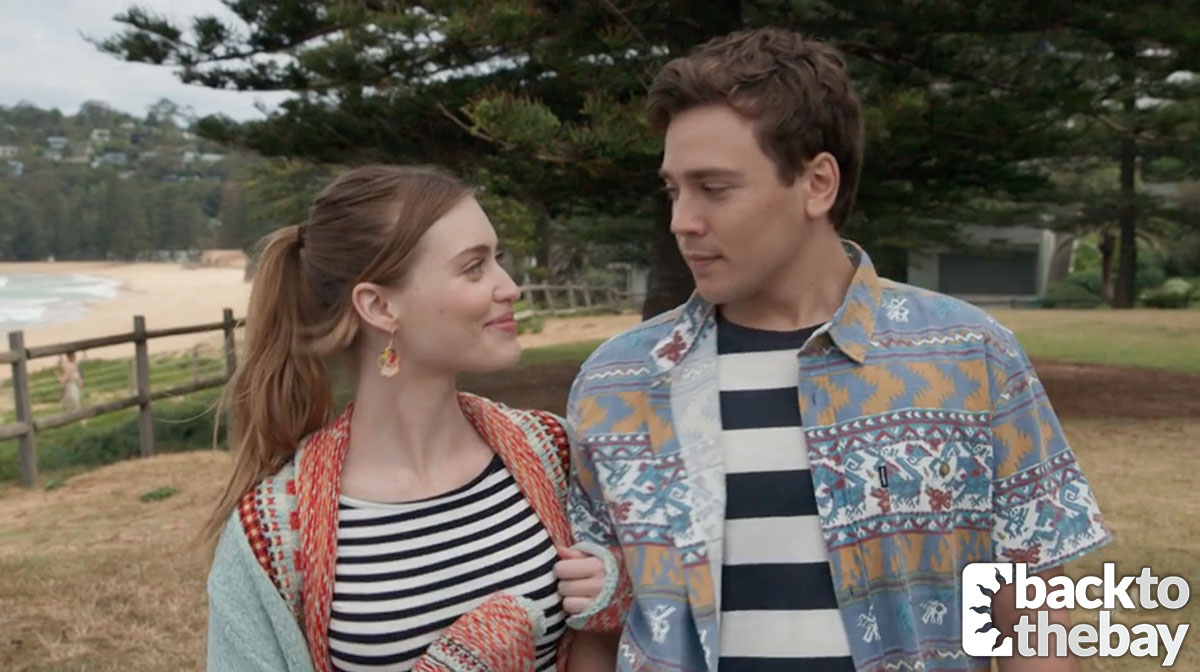 His nervousness ends up giving Chloe the wrong impression, and she suspects he’s feeling anxious about their “first time” together.

He ends up going along with it, with both of them agreeing that they’re in no rush. Chloe, oblivious to the real dilemma playing on his mind, thinks he’s really sweet for feeling nervous about spending the night with her.

Will she still think he’s sweet when he finally plucks up the courage to fire her?

Meanwhile, an unemployed Tane is getting fed up with being unable to pay his way. Whenever he and Ziggy head out, she ends up footing the bill, and while she doesn’t mind, it’s denting his ego.

On top of that, Ari is out of work, meaning they desperately need a regular salary coming in to be able to pay their rent. 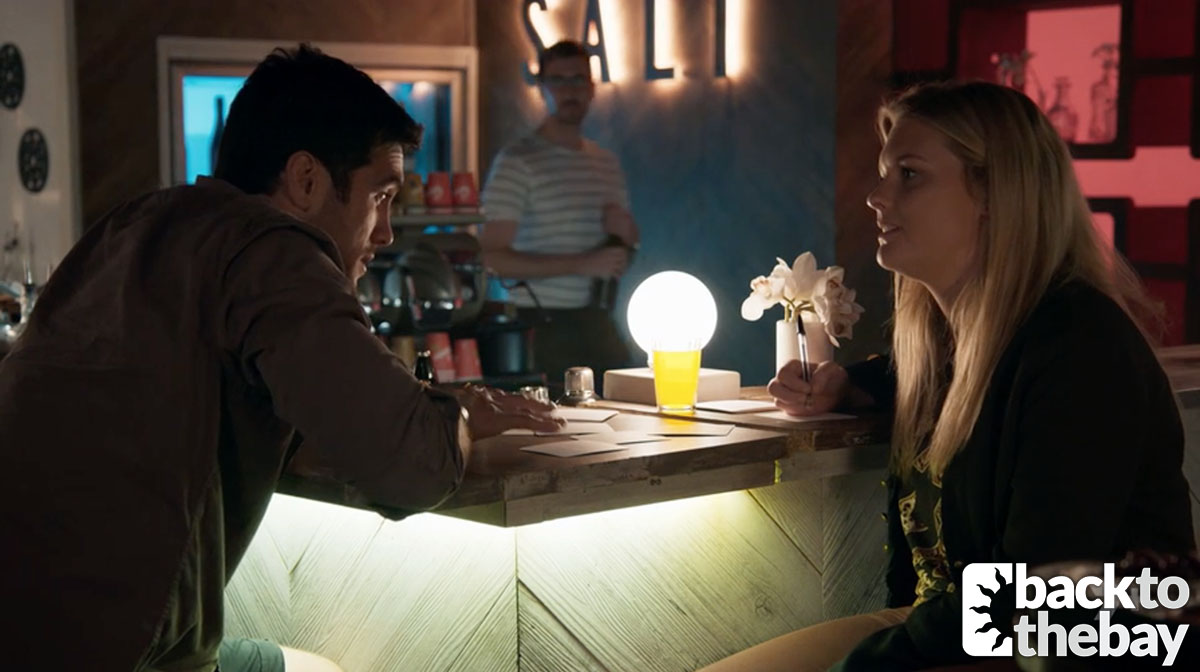 Next week, Ziggy makes it her mission to secure Tane a job. She offers to help her boyfriend write a CV – the only problem, he’s not exactly got a squeaky clean employment record. In fact, he’s never had a real job!

With dodgy dealings having kept him cashed up throughout his life, he just hasn’t needed a regular job, so they’re forced to put a good spin on his criminal activities to make his CV look good. 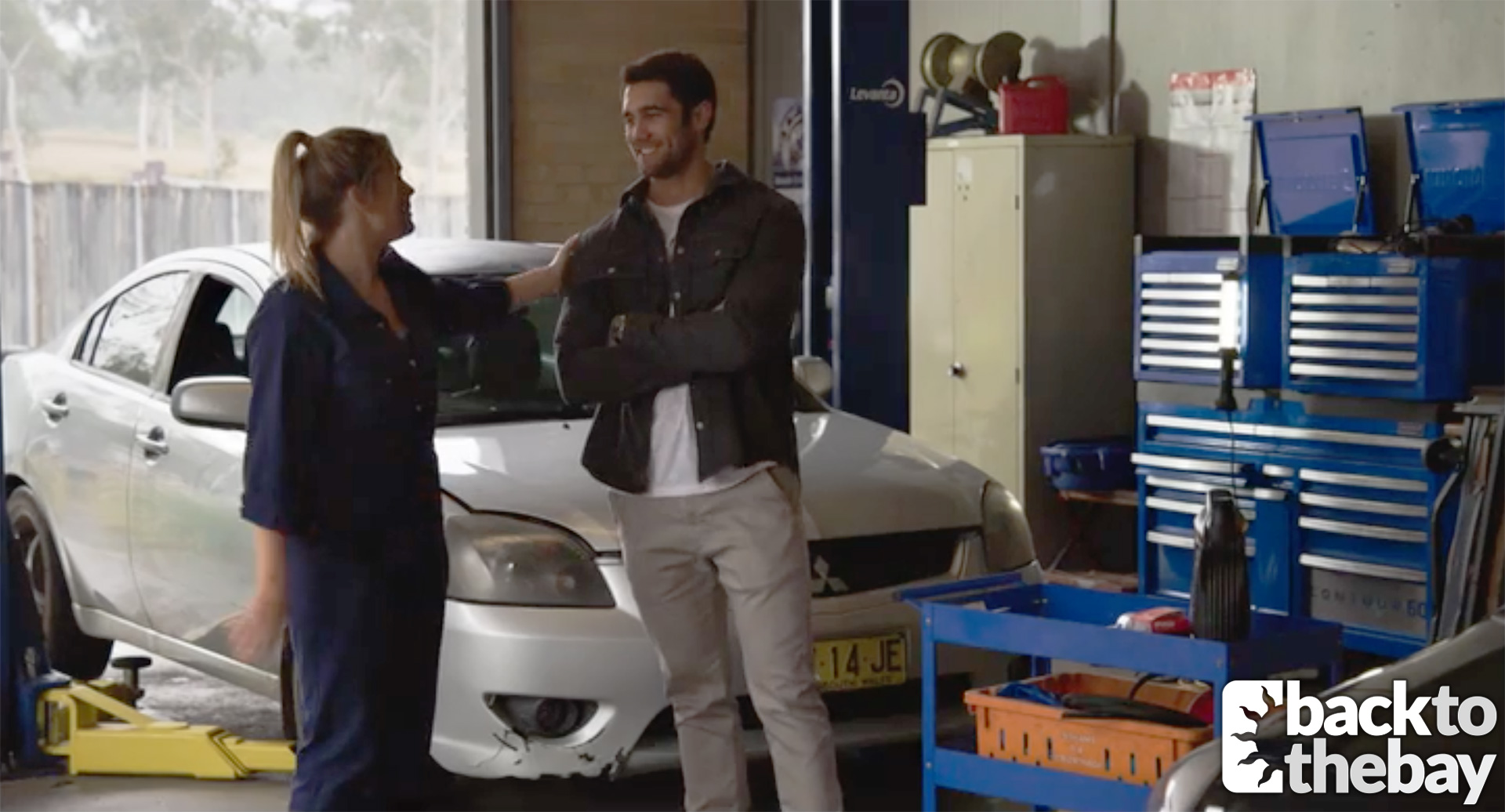 Co-ordinating deliveries off the back of a truck got Tane into trouble when he was working at the garage, but Ziggy puts a good spin on it

“I used to co-ordinate deliveries off the back of a truck,” suggests Tane, referring to his time spent offloading dodgy goods from white vans.

With a little help from Zig, that becomes “logistics and communication whilst managing a streamlined delivery service.” Perfect. She also suggests they add his job at Summer Bay Auto – it may have only been a day and a half, but it comes with a glowing reference from Ziggy, who’s seemingly forgotten the amount of damage he caused in his short time as her assistant.

They’re definitely getting somewhere. Will they manage to bag him his first ever real job?

Can Mac keep her secret from Ari any longer? Lewis and Christian come to a head again.

Ari’s boredom is getting too much for everyone. Christian faces his final judgement. Jasmine sees the depths to Lewis’ trauma.

Mia has a job interview. Nikau turns down a great opportunity. John begins to resemble his old self.

Mac becomes a challenge. Ryder and Chloe’s love bubble sickens everyone. Amber says something she regrets.