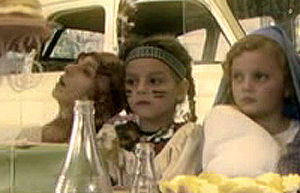 Apparently born in 1960, the elusive Debra Stewart was described in the original press material for the show as the younger sister of Alf, Morag, Celia and Barbara – and despite being part of the prominent Stewart family, nothing is known about her. Episode 74 in 1988 saw Celia briefly mention Debra, when she recalled their family picnics in the bay as children, but she has never been mentioned since.

In 2010 a flashback to Alf’s 5th birthday party featured a young Debra, dressed as a Red Indian, sat alongside her siblings. Whilst technically Debra probably should not have been born at that point, it confirms that she has now been remembered as part of the family. Whatever happened to her still remains to be seen….