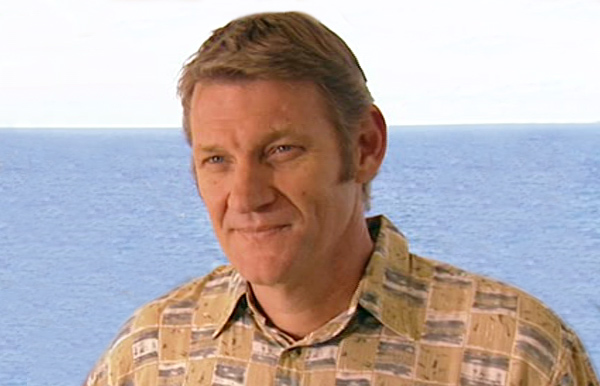 The appearance of Hayley and Will’s father was “evoked” in 1999 by Hayley’s entry in an art competition. Ken saw her picture in the newspaper and decided to retrace his kids. Ken wasn’t Will’s favourite at all hence Will couldn’t let bygones be bygones. Ken moved into one of the caravans at the local caravan park till he was caught out by Will drinking although he promised not to do it again. One day Ken tumbled out of the woodwork, completely drunken, right in front of Sally’s car who wasn’t able to slow down completely in time. Ken also stuffed up his job interview at the school arranged by “soul mate” Irene having fallen in love with him in secret, apparently because he’d slept in on the beach. Will caught the lovebirds Irene and Ken in the act and ran off disgustedly. Ken promised to get clean for good and promised Irene to hit Summer Bay again when healed. After a major break, Ken returned to Summer Bay in early 2000 and even got himself a job at the weird farmer’s plantation. Being told by the farmer than Ken used to have a beer with him, Will immediately jumped to conclusions that his dad was on the booze again and also spread this assumption at Irene’s. But once this misunderstanding was sorted out all seemed to be smooth sailing. Nick was supposed to contribute to the Smith family contribution but was reluctant and making him listen to Will’s enlightenment on his faded away mother only made things worse. Ken’s proposal made Irene’s life worthwhile again but him not turning up at his own wedding made everyone wonder! A run-away-groom this time?