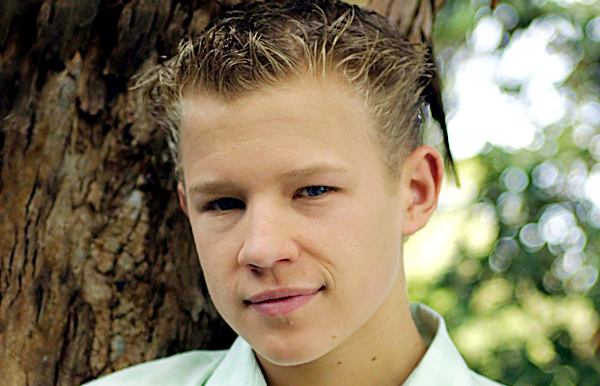 Nick, Hayley and Will’s little beloved brother, originally hit the Bay for the very first time back in 1999 as he tried to escape from a motor biker drug dealer he owed money! Nick also looked a tad different then and his foster-father was played by Irene’s millionaire flame Anthony being annoying since there were only some months in-between those two completely different roles. But back to Nick. There was an agreement that Nick should rather live at his foster parents’ home than at Irene’s thus we didn’t see Nick for white a long while til mid 2000 where a change of plans took place and Nick was the missing link to reunite the “Smith-clan” apart from his mentally ill mother of course. Speaking of whom, Nick let Irene know right from the very start that she’d never replace his mother or be sort of surrogate for her and adamantly caused one stir after another! After Hayley had told him about Irene’s stuffed up past as for the upbringing of her own kids, things even went from bad to worse!

Nick found himself an ally in local rascal Duncan Stewart after being chased out of the Surf Club for being rude with Alf. Nick thought that Alf was nought more than an old fat Nazi pig who was supposed to be taught a lesson for pushing people around and thus talked Duncan into nicking the Surf Club’s keys in order to rip the Surf Club into pieces. Nick even trashed the front door to make it look like a burglary. But aunty Celia caught collaborating Duncan just as he wanted to let himself into the house quietly, as if nothing ever had happened. It turned out that someone must have got hold of the police hence the police couldn’t be fooled and aunt Celia put two and two together and also interpreted the guilty faces of Duncan and Nick “David” in a very accurate way. Celia who made him promise to steer clear of this local delinquent for good busted Duncan. But Duncan was reluctant to remember the promise he made and sneaked over to this tearaway’s place. Being deprived of money Nick was adamant of getting some by vandalising the local phone box but both were observed by Summer Bay’s local bad-mouthing gossip Colleen dropping hints to Celia handing out an ultimatum to Duncan by making him and Nick confess otherwise they’d get busted big time.

On this very afternoon Nick was supposed to witness Ken’s proposal celebration but managed to spoil it for the entire family by hurling his glass and then taking of just as Alf wanted to fill Ken into his son’s mischievous deeds. At the very same time aunty Celia was hit by a minor rock and it sprang to her mind that young Nick had to be the culprit!

But the big mini-cliff-hanger was if it really had been Nick spicing up Irene’s cuppa or maybe not and the enlightenment on it was never given. As for aunty Celia and Nick’s cantankerous behaviour, Duncan lost control and the both of them had a rather violent blue down the beach observed by standing-by and chuckling flamin’ old Alfred.

Nick’s very first school day was characterised by a non-event since he preferred not to turn up but as soon as Irene learnt about this impudent deed she jumped into her car to relocate this spoilt tearaway finding him on the front-seat of a no-hoper’s car right in the middle of nowhere.

When learning that Irene had almost had a major “accident” because she had been nearly hit by a accelerating unidentified car Nick realised on the spot that something was suss and left without notice to shadow Irene’s by sneaking around. On the quest for Nick Ken found out, by visiting Nick’s former foster mother that a weird kind of woman had kept seeing Nick for a while and suddenly he realised that the person in question was this nutcase of ex-wife trying to get rid of Irene. Ken tried to reach her but too late since Irene’s lounge wall had been greased and she’d already freaked big time. Irene tried to threat Nick’s zany mother with this very fragile looking bat but the whole thing backfired as Irene turned off the shower’s tap and this mummy got hold of this ridiculous weapon to bash up Irene big time but Nick turned up in the last tick to protect Irene from his own mother. He defended Irene big time by telling his mum that she needed professional help but Nick’s mum only told him that Irene had achieved what she had been longing for namely a profound brainwash of him.

Nick didn’t seem to be too shattered by this most unpleasant incident – maybe a self-protective camouflage of his – and carried on pestering Alf and Duncan. After chucking a tantrum at the Surf Club, Alf banned him from this place vexing Ken who was supposed to take care of Alf’s wrecked boat engine. But Nick and Duncan came to terms after quarrelling about the simplicity of casting the rod down at the wharf since Duncan was so understanding about Nick’s incompetence to do it right. Duncan also let Nick know that he had been clumsier the first time HE did it and the both of them became really good cobbers for the time being.

After watching his father propose to Irene Roberts, Nick thought his family was complete. However it didn’t last long, as a week before the wedding Nick had to stand and watch his father die from being crushed by a car.

Nick soon saw his older brother Will as his new guider in life and was again devastated when he to left the bay, though this time he was leaving for a new home with his own wife and daughter.

Nick has always been energetic and daring and his leader like qualities have been both good and bad, often leading both him and his best mates (Duncan and then Seb) into trouble. Nick had a reminder of life though when he was caught in a bus accident and paralysed from the hips down, since making a full recovery with the help of Irene and Jade, Nick has become a bit more mature in his ways, though his cheeky side still remains.

Although Nick started off dating Kirsty, her antics became all too much for him and he was soon going out with sexy Sutherland girl Jade. However, with the recent change of her attitude to life, it has meant that their relationship has been going faster than he would’ve hoped for.

When Nick was given the opportunity of a life-time to star in a reality tv programme ‘The Dorm’, he grabbed it with both hands. However his antics in the Dorm, with another girl, led Jade to dumping him on his early eviction. Nick saw nothing positive in his life for a while, untill a production crew who had seen him in the Dorm offered him a chance to go to Hollywood. There was nothing anyone could do to stop him and within a month he’d left for the US.