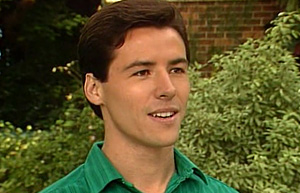 First mentioned as the rich kid Roo hung out with during her time in the city. He was first seen when Roo returned to the city and met up with him to tell him she was pregnant. He told her to have an abortion but she refused, opting to keep the baby. The next day he turned up to take her the hospital and force her to have an abortion but she ran away. She later confided in him her plan to convince Frank to marry her and pass the baby off as his.

He was next seen when Bobby, having worked out the dates of Roo’s pregnancy, tracked him down to tell him that Roo was planning to pass his baby off as Frank’s. He was surprised that Roo had managed to pull it off and laughed at Bobby but turned up in the bay the next episode. When Roo visited him in the hotel and demanded to know why he was there he explained that a recent case of mumps had left him infertile. Roo insisted on going ahead with he plan so Brett confided in her Aunt Morag who thought Frank wasn’t good enough for Roo and agreed to help Brett go for custody in the hope that it would bring Brett, who was much more suitable and Roo together.

After her failed wedding to Frank, Brett and Morag tried to convince Roo to sign her baby over to Brett. Roo signed the papers but then decided that she didn’t want to give her baby to someone like Brett so ran off and returned telling Brett that she had had her baby aborted. After finding out from Morag that Roo had lied about the abortion, Brett’s lawyer came to see The Stewarts and demanded they hand over the baby or face a custody battle. Alf went to see Brett and hit him but afterwards he and Roo sat down for a talk and he agreed not to bring in anymore lawyers but to be involved in the baby’s life.

At a dinner party hosted by Morag, Brett managed to get both Alf and Celia onside by suggesting a proposal for bringing business into the bay and Alf was persuaded to invest. He gave Frank a job in an attempt to win him over but Frank was working along with Ailsa to expose him and his resort development as being a fraud. Meanwhile he began trying to come onto Bobby but she refused to have anything to do with him, repeatedly humiliating him.

He threatened Ailsa and when she turned Alf on him, he set about digging up dirt on her and his interference caused her and Alf to split and Ailsa to leave town. As revenge Bobby agreed to go on a date with him but publicly humiliated him by getting together with Frank. He tried to keep Ailsa and Alf ap0art when she returned by conspiring with Roo to fake her labour but she actually went into labour with Brett at her side.

When Alf arrived at the hospital he insisted that Brett and his interfering father keep away but when baby Martha was born Gordon insisted that he wanted nothing to do with the baby because she was a girl, leaving Brett devastated. He got drunk and was woken by a jug of water poured on his head by his sister Stacey who had been sent by his father to take over the business and had to beg for a place to stay at The Caravan Park.

Feeling he had nothing else going for him, Brett decided once more that he wanted custody of Baby Martha. He blackmailed Roo into handing her over by saying that he would pull the plug on the development if she didn’t meaning that her father and the rest of the town would lose their money. Reluctantly Roo handed over her baby.

Ostracized by everyone, Roo ended up confiding in Alf and a desperate Brett stole money from the family business and took Martha from the hospital before running away with her. Stacey and Philip chased him but Brett slammed Philip’s hand in the car door, ruining his career and allowing him to get away. In Melbourne he struggled to look after Martha and eventually called for a Doctor who called the police. Brett sat down for a long chat with Roo in which they decided that neither of them was a fit parent and decided to put Martha up for adoption.

Brett attempted to make amends but when Phillip refused to accept his apology he tried to kill himself but was stopped by Jeff Samuels. After a long chat with his sister Stacey, he decided to leave town.

He was heard of again in 2005 when Martha came to town and tried to get in touch with him but we heard from Martha that he wanted nothing to do with her. He later appeared in town, running the Macklin development in their quest to set up a small resort in the town. He tried to get in touch with Martha again and she was surprised, after her had dismissed her just a few months ago.

He was revealed to be involved with Josie both romantically and in a deal to develop their new resort on The Caravan Park. He had no idea though that she was working to expose his dodgy deal to dump toxic waste on the new site. When he realised what she was up to he tried to kill her by pushing her off a cliff and was arrested.