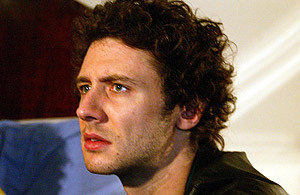 Despite having a wife and two children Aaron Copeland struggled with the demons of drink and was often abusive to his wife Diana. After a series of rows Diana had had enough, threatening to leave and deny him access to the children. Aaron took matters into his own hands, and ran away with Miles in the middle of the night, leaving Sally after deciding that the road was no place for a young girl. He lived outside the system so he could not be found by authorities.

After five years Aaron found an old newspaper article, reporting the death of Diana and her new husband Derek Wilson in a boating accident on the Barton River a few years earlier. Knowing that Sally would now be considered an orphan, he set about trying to find her. He took Miles to visit his grandmother, Mrs Keating, only to find the house had new owners, who told them that Sally had been fostered out. They tracked Mrs Keating down to a local nursing home where they found she had been diagnosed with Alzheimer Disease. From the staff, they found out that Sally had been fostered by a couple in the city called the Fletchers, and were given an address to find them. However on arriving in the city they found that they were a week too late. The house was empty and a neighbour told them that the Fletchers had moved to a place called Summer Bay.

Aaron took Miles to Summer Bay, where Miles was looking forward to finally seeing his sister again. However once Aaron had seen Summer Bay, coupled with the glowing comments he had heard about Sally’s new foster family, he decided that Sally would have a better life with the Fletchers. They left the bay without seeing Sally.

Following that, Aaron descended into a downward spiral. He stopped going to work and his drinking increased. Eventually, in 2000, when Miles was 19, Aaron died of alcohol related dementia