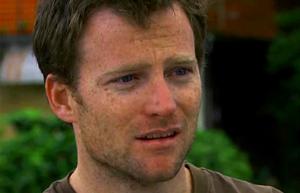 Brett was the brother of Joey Collins and a friend of Robbo Cruze.When Robbo told him that Joey was saying he’d raped her, Brett went to the police station and dragged Joey away before she could make a statement.With Charlie for support, Joey spoke to Brett and told him that it was true and that she was gay. Brett was unable to accept either fact however and threw her out of the house.

When Joey went missing, Charlie interviewed Brett, who admitted she’d taken her things from the house but didn’t seem bothered what had happened to her.Charlie was disgusted with his attitude and told him he was as bad as Robbo.After Robbo had been arrested for trying to kill Joey, Brett went to see her and apologised for not believing her.He seemed to want to pretend her revelation about her sexuality had never happened and suggested they move up the coast and start a fishing trawler business together for a fresh start.

Joey moved back in with him for a while but moved out again when she and Charlie started a relationship. Brett learned of it when he went round the house and saw them kissing in the kitchen.He later turned up at the house drunk, telling Joey she needed help, and painted “Queer” on Charlie’s car.He returned while Joey was cleaning the car, convinced Charlie was responsible for her thinking she was gay.As his behaviour became increasingly aggressive, Leah started to phone the police but Brett backed off when Hugo stepped in.He later made a complaint to the police, saying Charlie had used her position to seduce Joey and take her away from her family.When Charlie and Joey’s relationship broke up not long afterwards, Charlie went to Brett’s house to see if he knew where she was and Brett told her Joey was leaving on a three month job on a trawler.

Brett reappeared a few months later when he accidentally knocked Charlie down when she stepped out into the road near his house, suffering a minor car crash as a result.Angelo had a go at him for speeding and, when he and Charlie shared a treatment room, Brett accused Charlie of breaking up his family, saying Joey was never coming back because of her.Although Charlie said she didn’t want to press charges, Brett was last seen being taken into the police station.