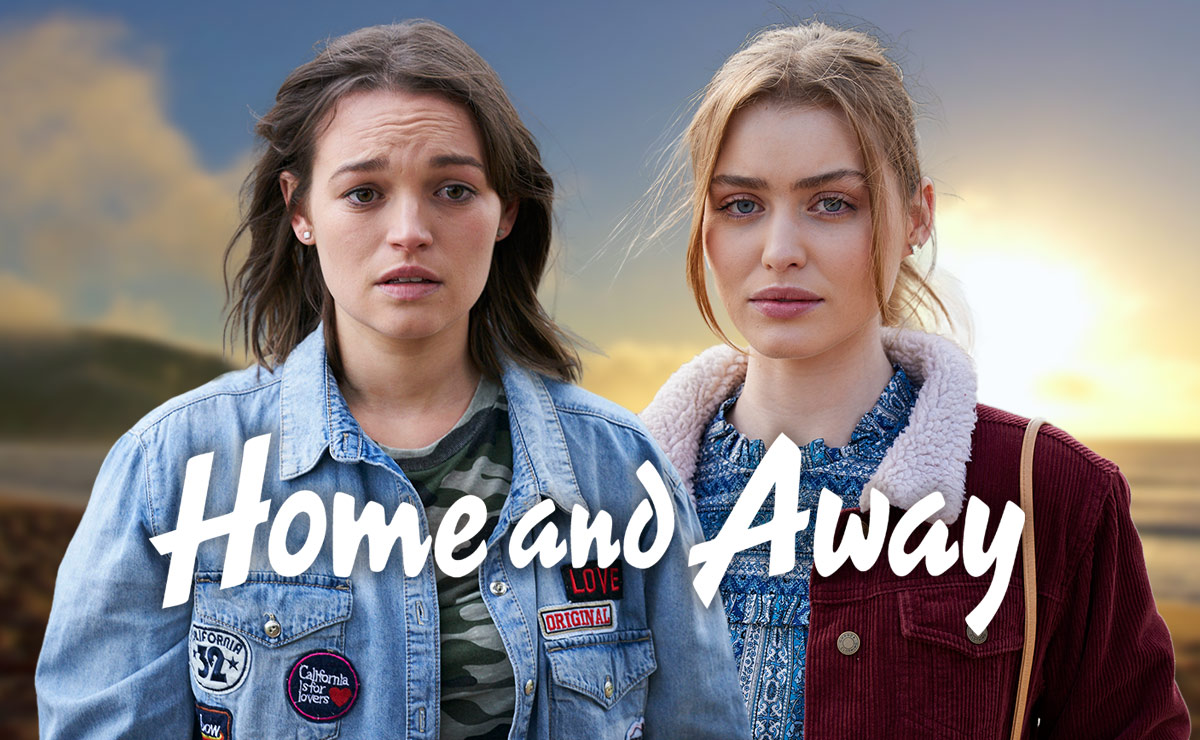 Coming up next week on Home and Away in the UK, the bikies’ threats have far-reaching effects as Chloe flees to New Zealand, and Bella is dealt a devastating blow…

The Paratas have found themselves in an impossible situation since Tex Wheeler (Lucas Linehan) and fellow members of the Death Adders Motorcycle Club came on the scene.

Whilst it’s Tane’s (Ethan Browne) late brother Ari (Rob Kipa-Williams) that the bikies have beef with—since he stole money from them over a decade ago, which was eventually used to buy the gym—Ari’s death and Mia’s (Anna Samson) departure has left Tane being the one to pick up the pieces. 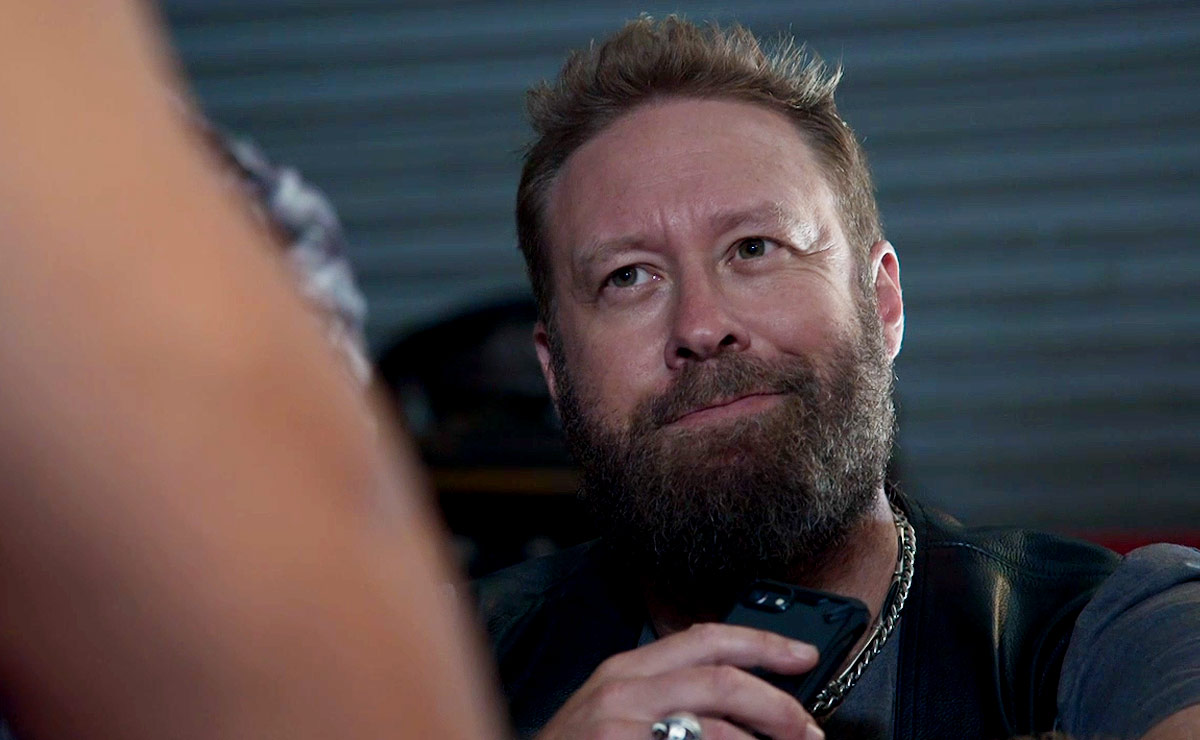 Taken to their HQ last week by leader Marty (Ben Wood), Tane discovered that they were expecting him to pay them back the full amount, plus interest, to a total of $225,000.

Tane knew there was no way he’d be able to raise that sort of cash, so decided that selling the gym was the only option. But the bikies had a better idea… they were instead going to place one of their own in the gym, and use the business to launder money. 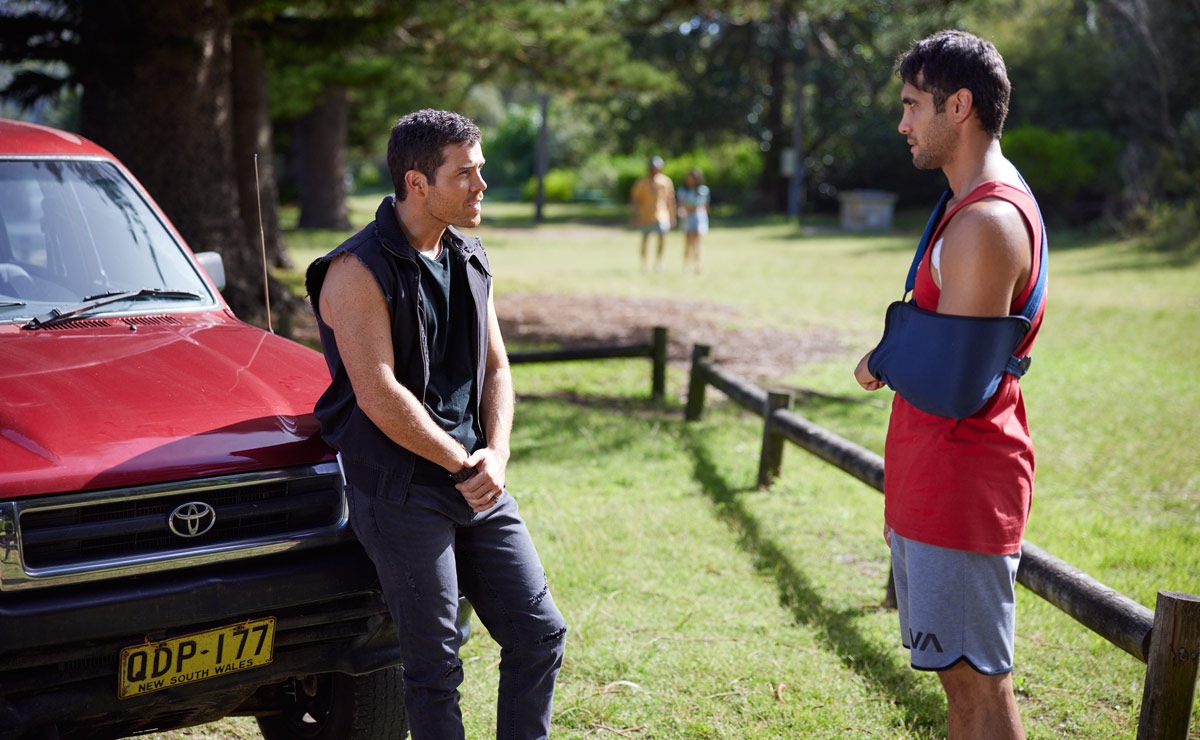 When Tane admitted what had been going on to nephew Nikau (Kawakawa Fox-Reo) he was horrified, but they knew they were stuck between a rock and a hard place. With Tex having done his homework on the family, the bikies are aware of Tane’s girlfriend Felicity (Jacqui Purvis) and Ari’s stepdaughter Chloe (Sam Barrett), and aren’t afraid to get them involved if Tane doesn’t go along with their plan.

Chloe was confused by Nik’s sudden desire to become her personal bodyguard. He eventually told her that there was some dangerous stuff going down, but didn’t go into detail as he promised her there was nothing to worry about whilst he was around. 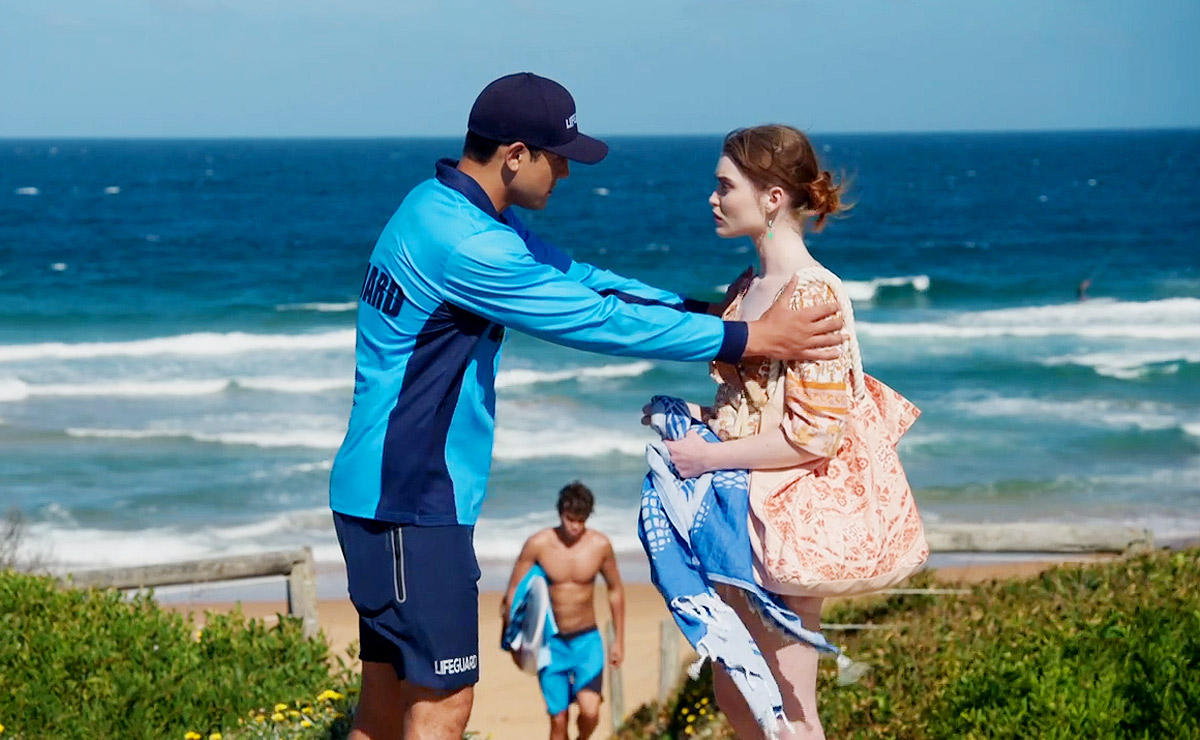 When Tane meets with Tex again next week, he tells him there’s a good chance that selling the gym would make far more than what the bikies are asking for, but Tex doesn’t take the bait. The business is far more useful to them as it is, and there’s no way they’re just going to let Tane just pay them off so they disappear.

Tex then reveals that they’ve got a deal going down the following week, which will be the perfect opportunity to put their new business arrangement to the test…. and if Tane cares about Chloe, he won’t protest. 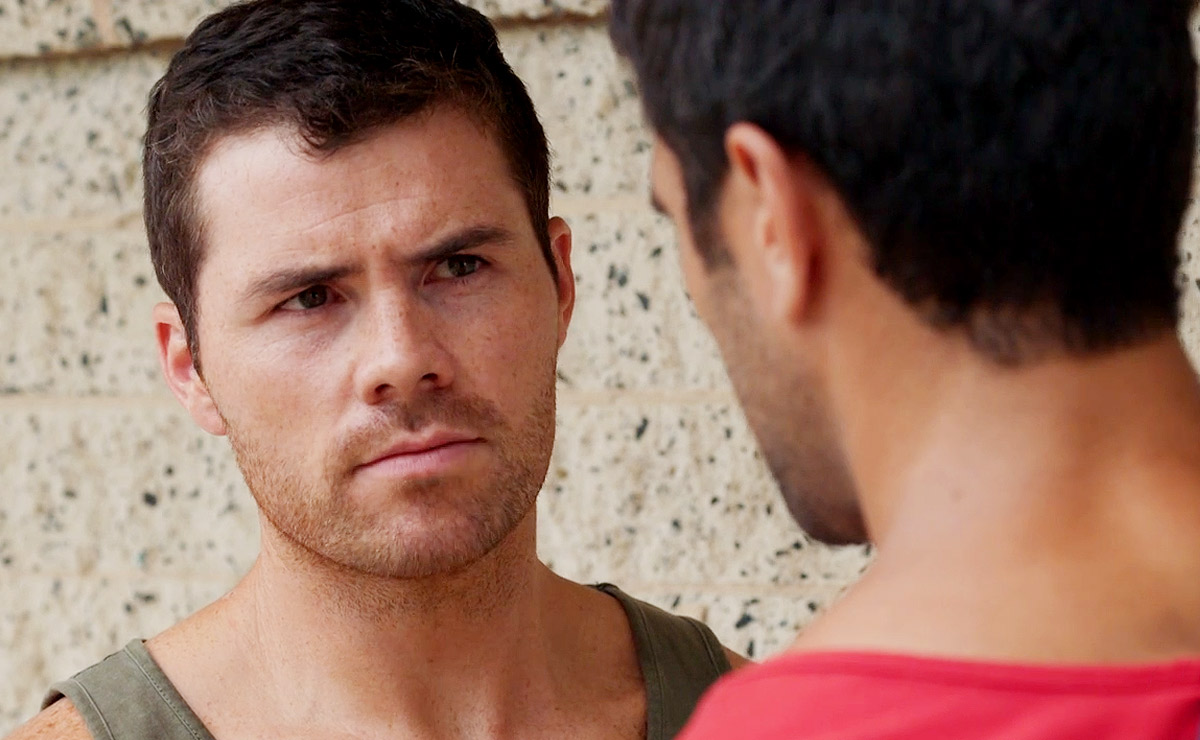 Nik is shocked when he witnesses Tane and Tex’s conversation, he had no idea that the laid back guy who’s been hanging around for weeks was one of the bikies. But that’s the least of his worries as they discuss ways to keep Chloe out of harm’s way.

Knowing that she’s safe whilst at work, Tane gives her a list of chores to do in the gym, but when Tane and Nik return home, Tex and his mates rock up on their motorbikes as an intimidation tactic. 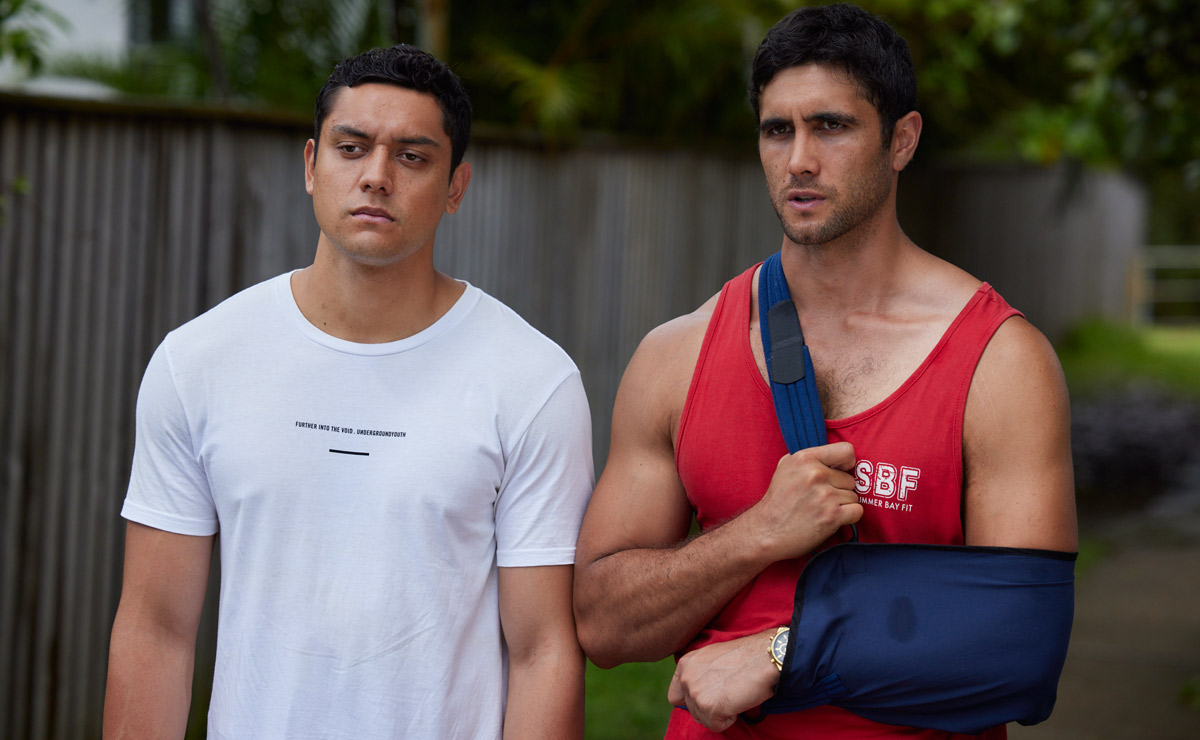 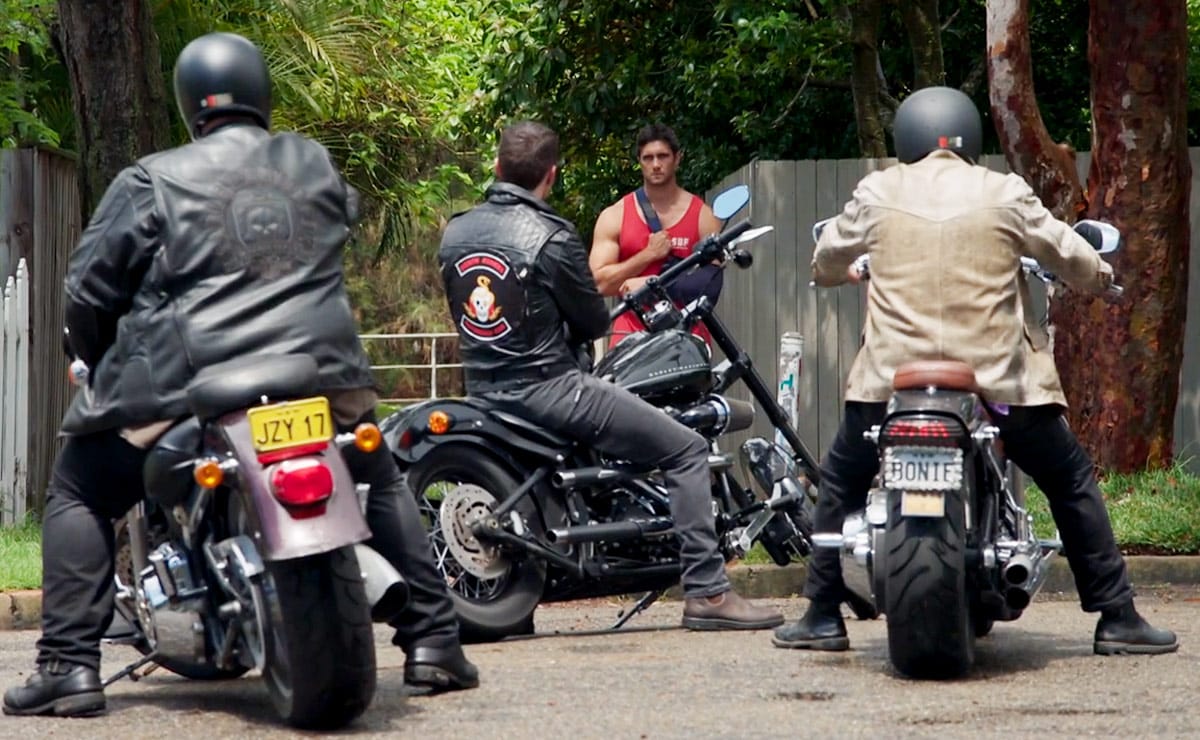 As they continue to lurk outside the house, Tane realises they’re only hanging around to make sure none of them go anywhere. 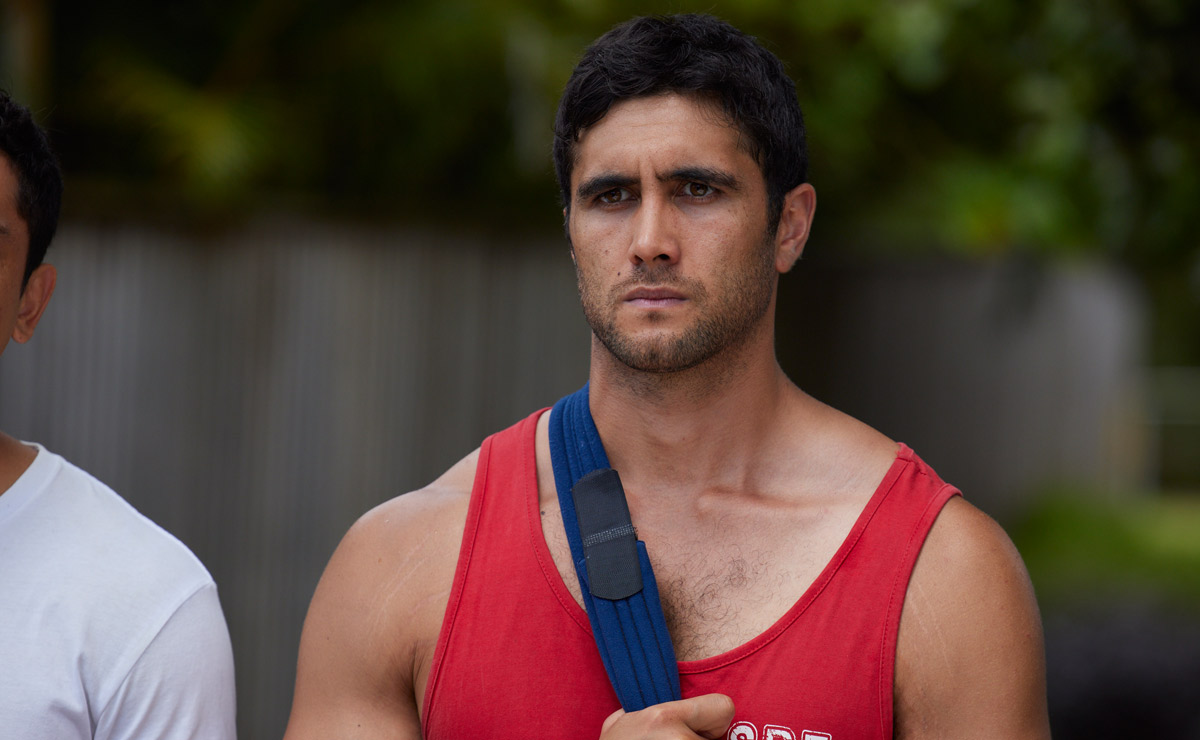 Not willing to take a chance on Chloe’s safety, Nik and Tane decide they have to act quickly. As Tane sneaks out through the back garden to retrieve Chloe, Nik stays put and packs up some of her things. 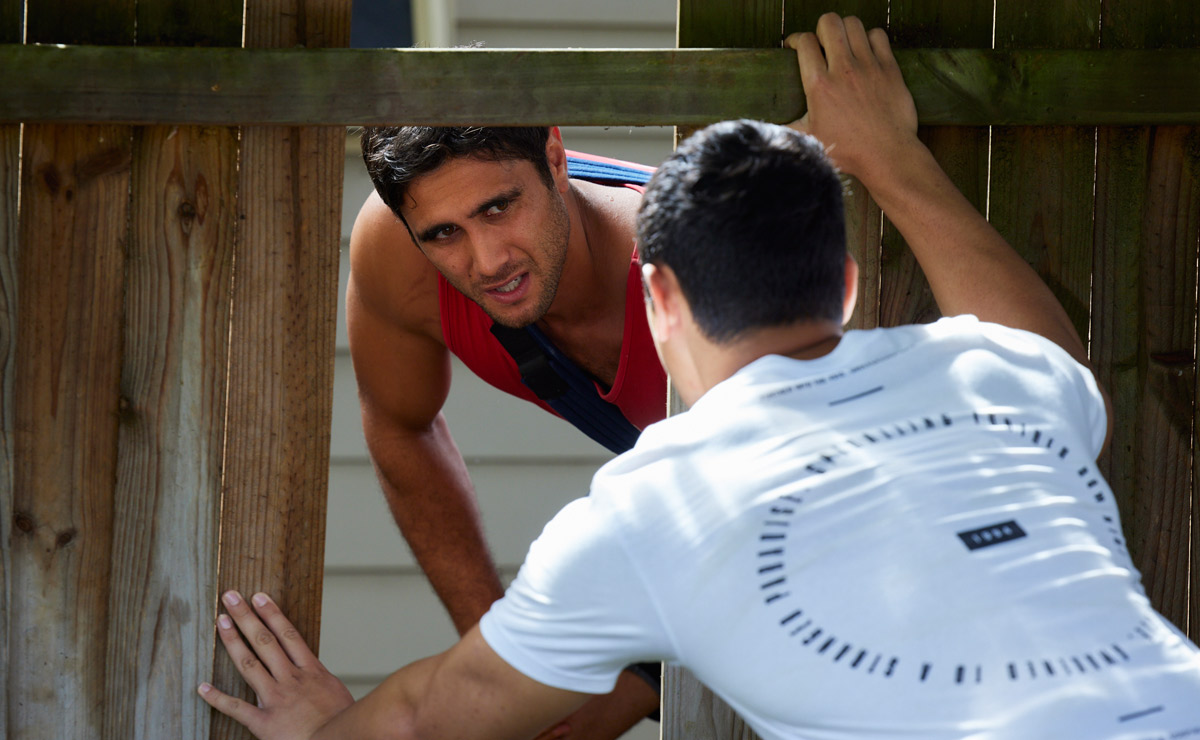 Chloe struggles to take everything in as Tane whisks her to a motel, as he assures her that he’s spoken to Mia in New Zealand who is safe.

It’s then that Tane reveals that the only way he can guarantee Chloe’s safety is to send her to New Zealand too! 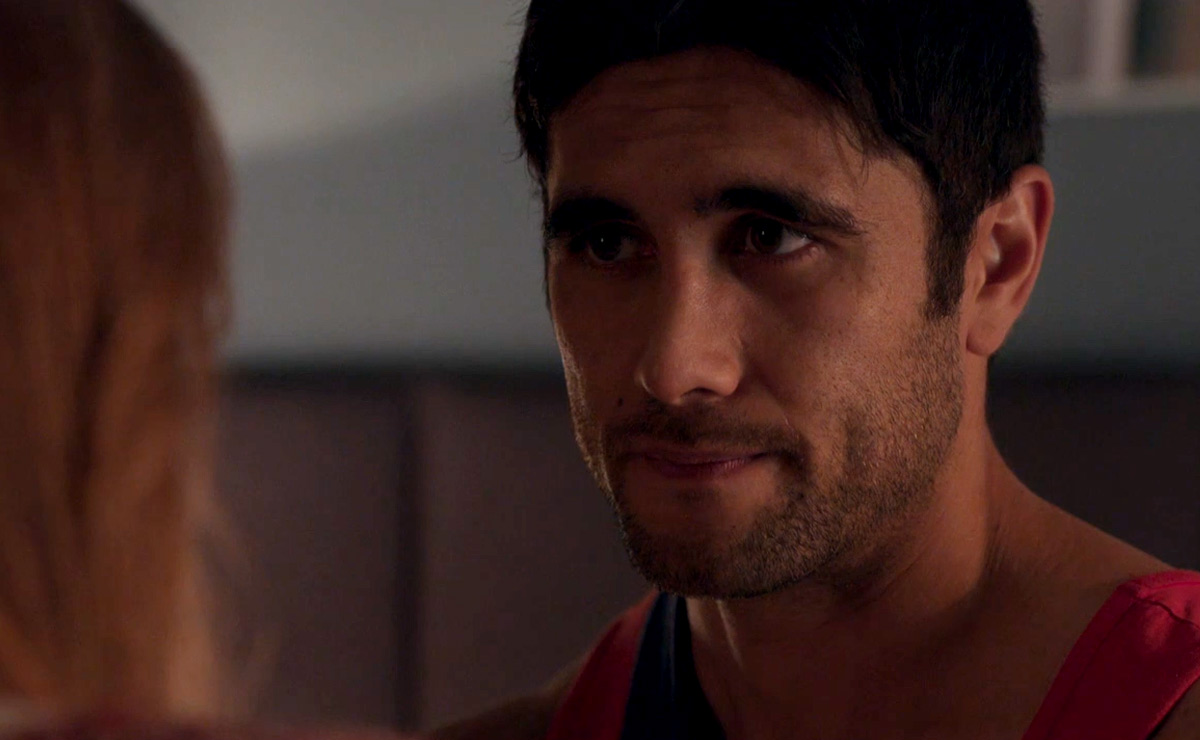 When Nik later arrives with Chloe’s clothes and passport, it all becomes too much, as she tells them that they can’t force her to go—why can’t she just go to the city?

Tane explains that the Parata whanau in New Zealand will be able to provide protection, and the bonus is she’ll be reunited with both Mia and Nik’s mum Gemma (Bree Peters). Tane also points out that it means they won’t be able to use other people she cares about to get to her… like boyfriend Theo (Matt Evans). 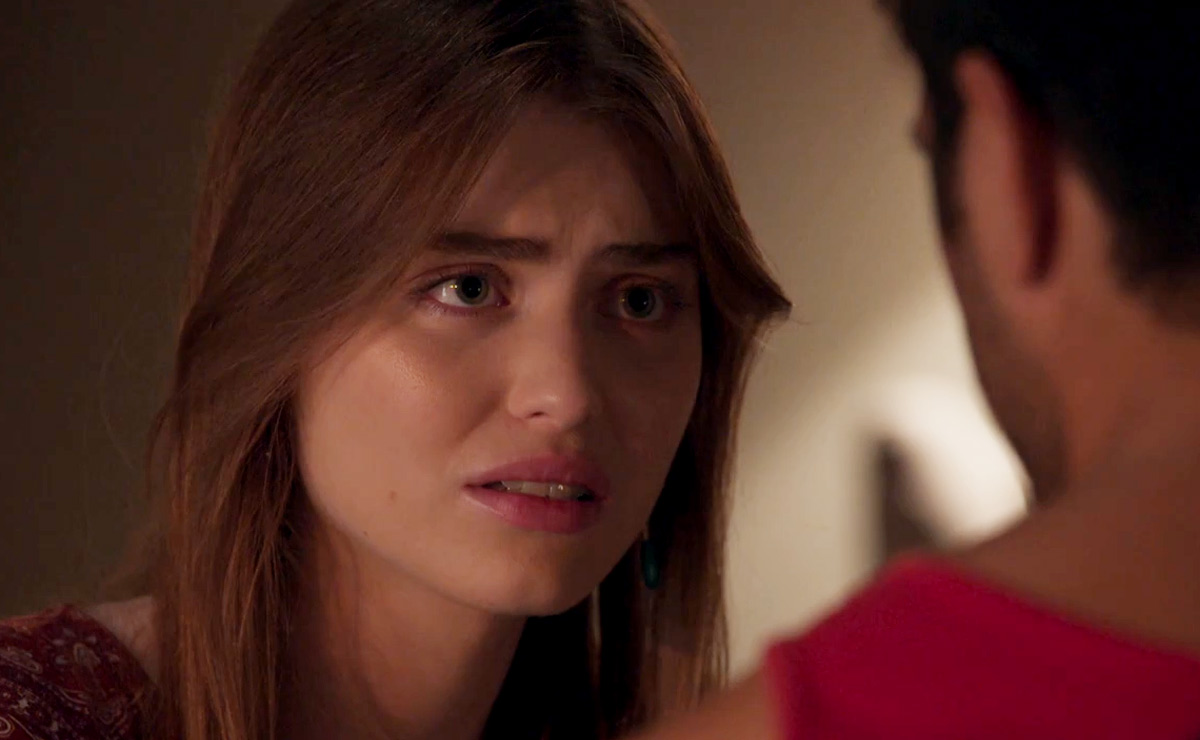 Theo is on top of the world after his successful audition to become Lyrik’s lead singer, and Chloe has had to ignore his calls as he tried to tell her the good news. When Chloe eventually answers, she’s forced to tell him that she has to go away for a few days due to some family issues.

Theo’s disappointed, but little does he realise that he won’t be seeing Chloe again… 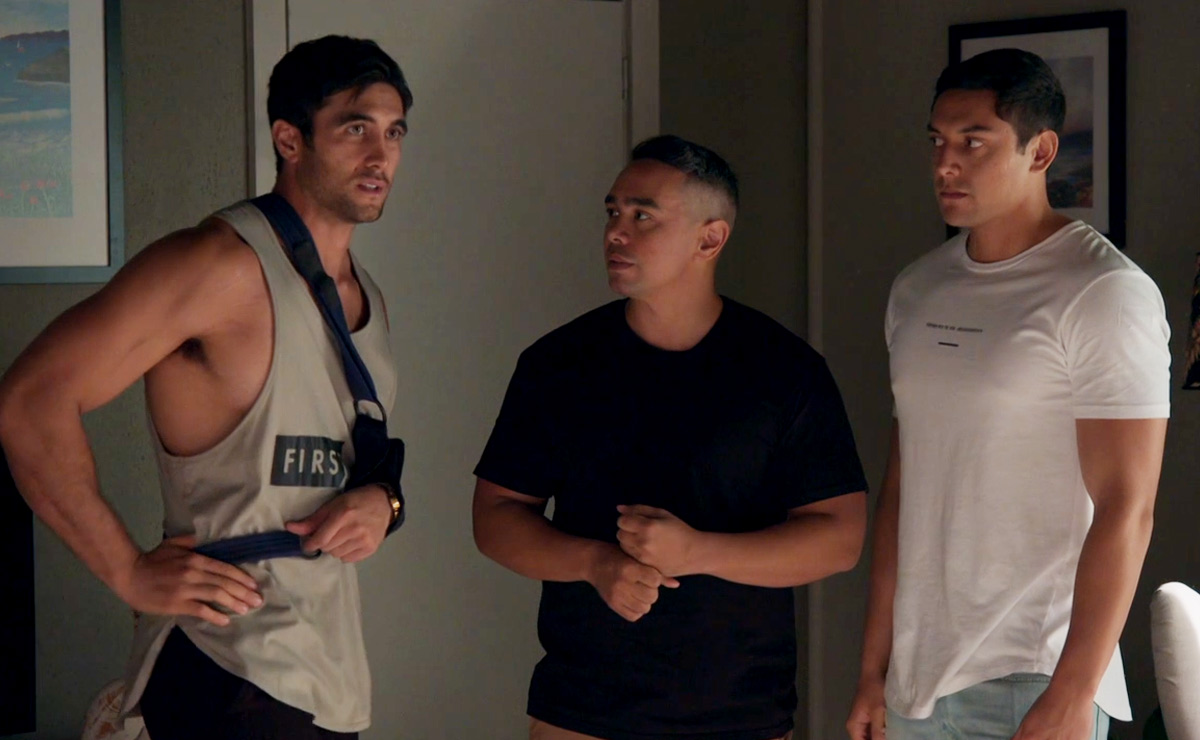 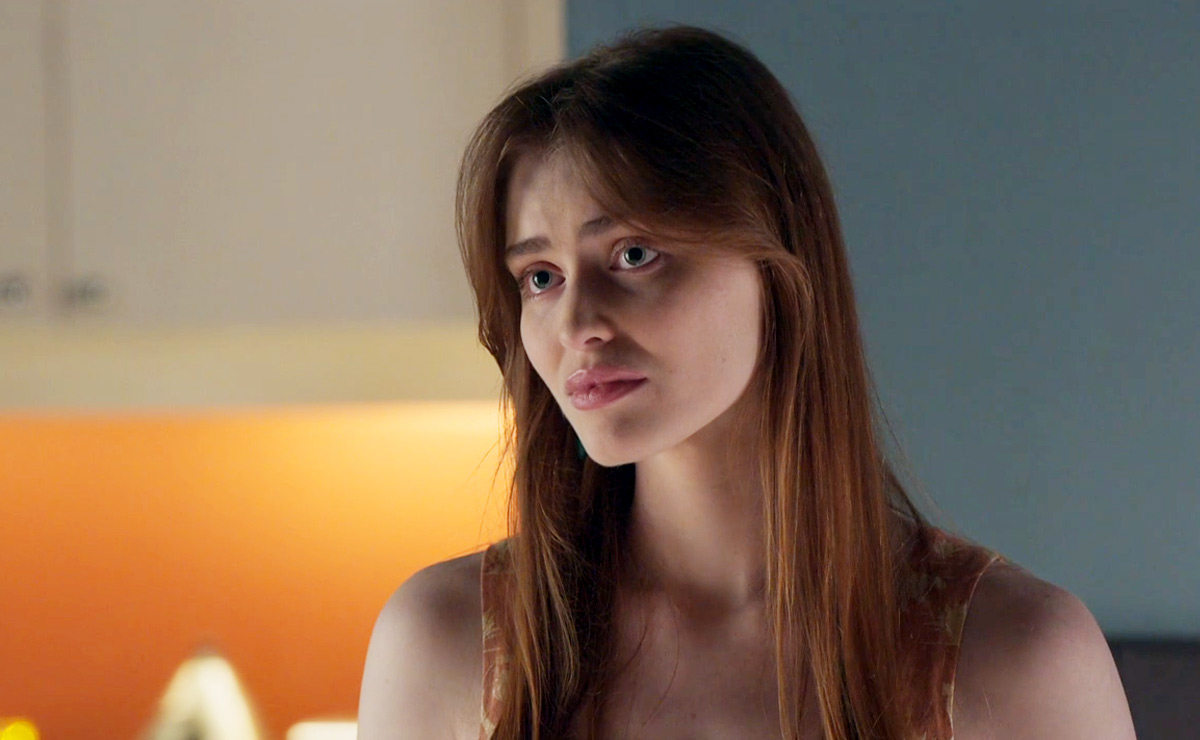 The next day Tane’s cousin Kiri arrives to take Chloe to the airport. Chloe wonders if she can call Theo from there to say goodbye, but Tane explains that even that’s too dangerous. Chloe has to ask Nik to apologise to Theo on her behalf when the time comes. 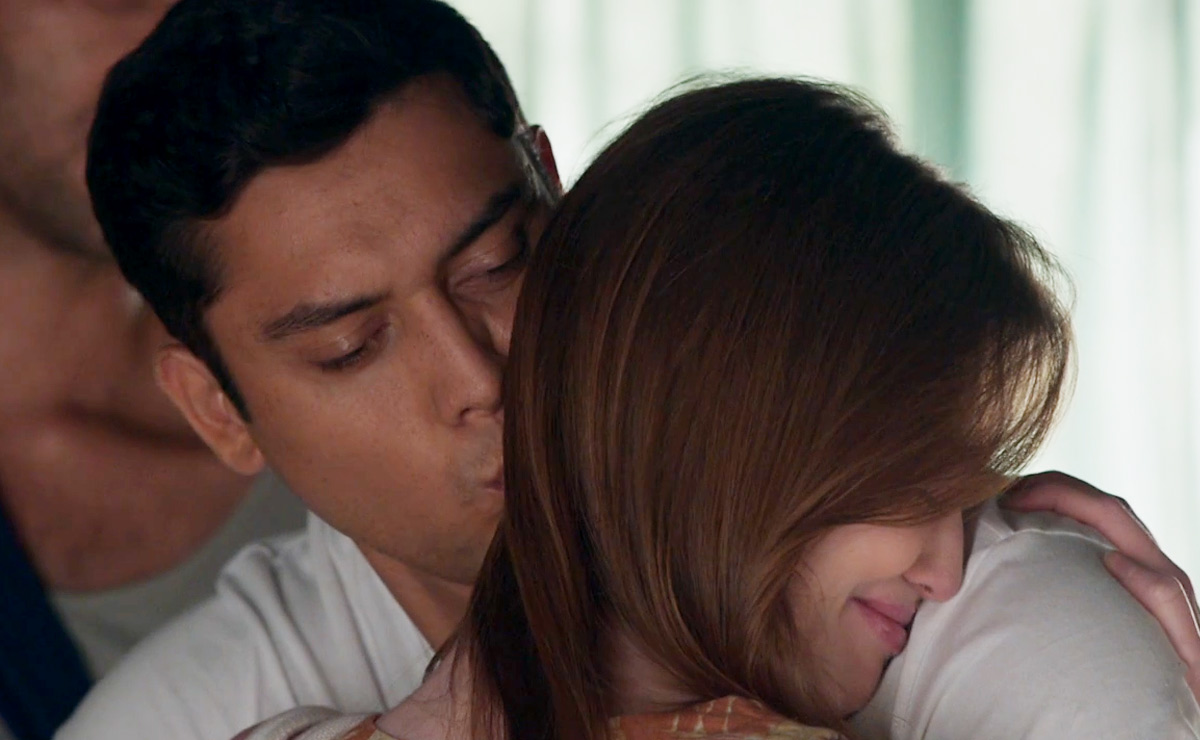 Chloe and Nik may have had their differences in the past few months, but it’s an emotional farewell between the two as Nik turns down Tane’s suggestion of going with her—there’s no way he’s leaving him to deal with this on his own.

Farewells said, Chloe takes one last look back at Nik and Tane before she departs Summer Bay…. 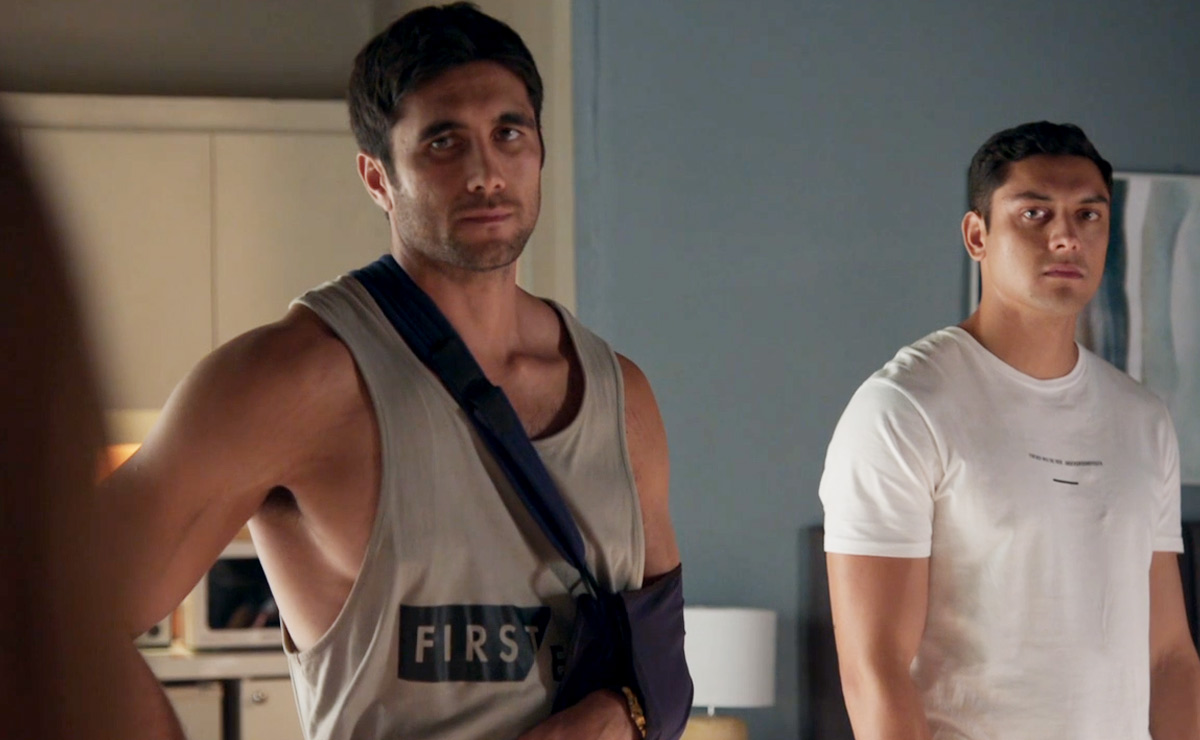 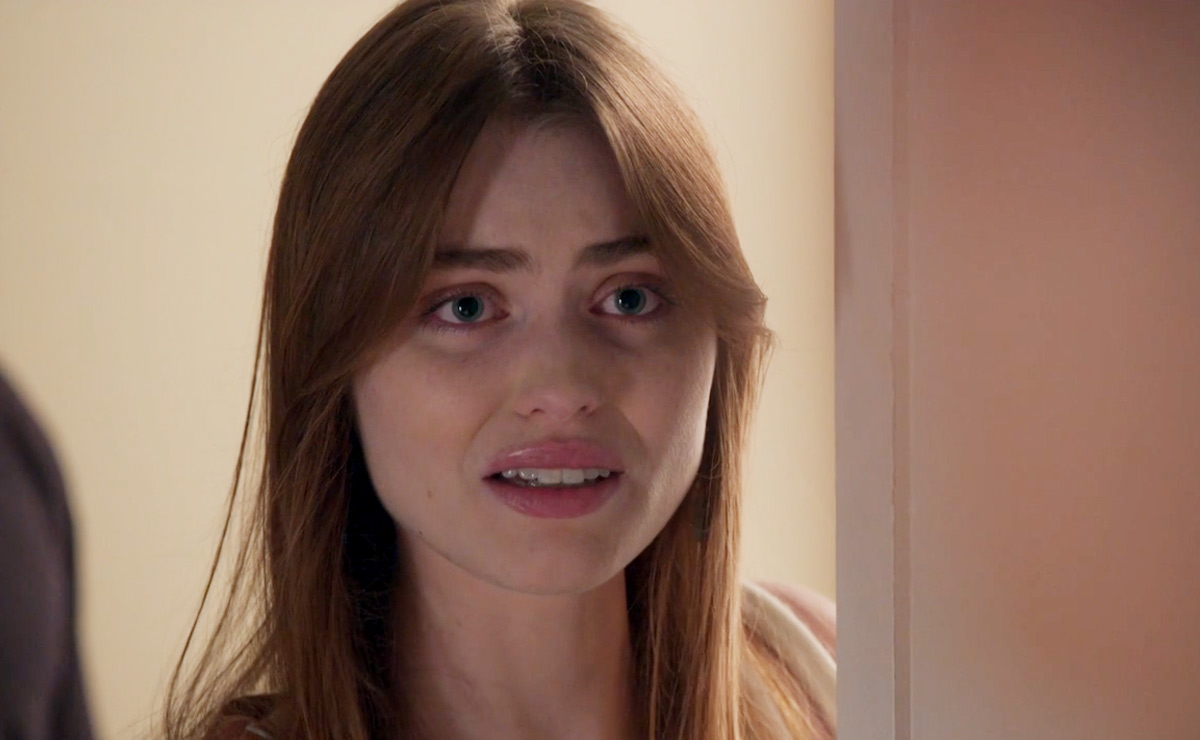 Meanwhile, having learned the truth about what’s going on from Tane, Flick isn’t impressed to see Tex turn up in Salt, and orders him out. 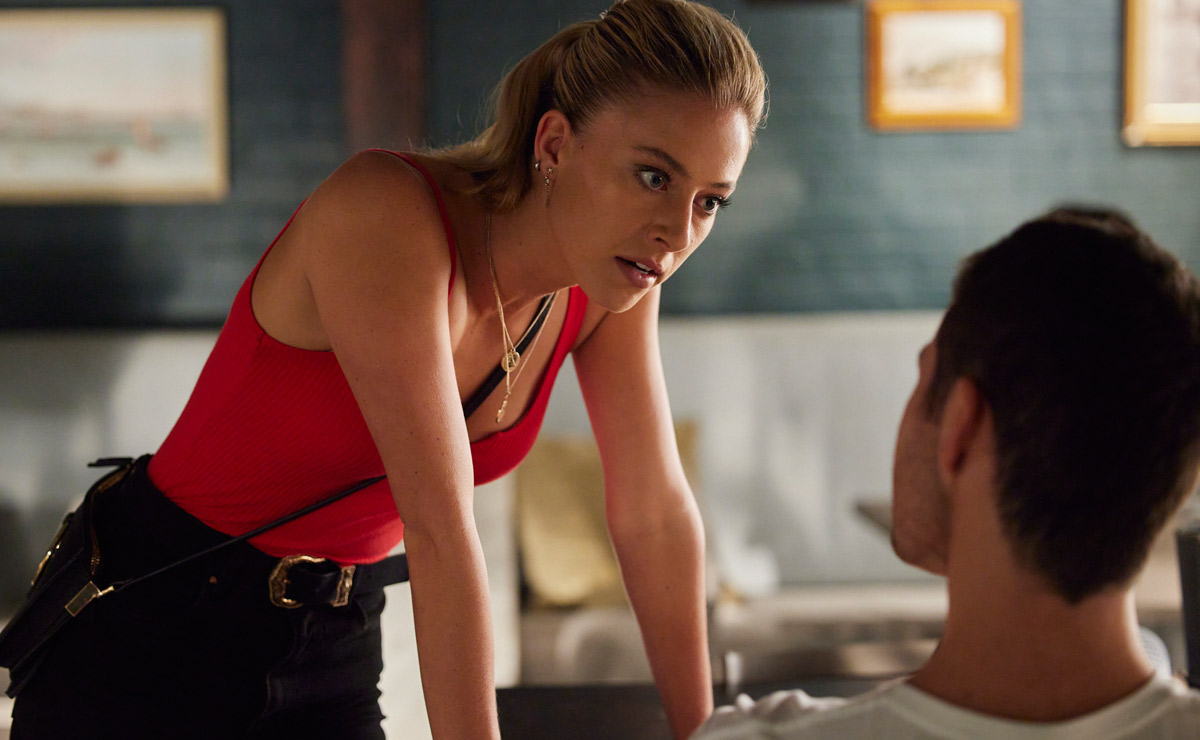 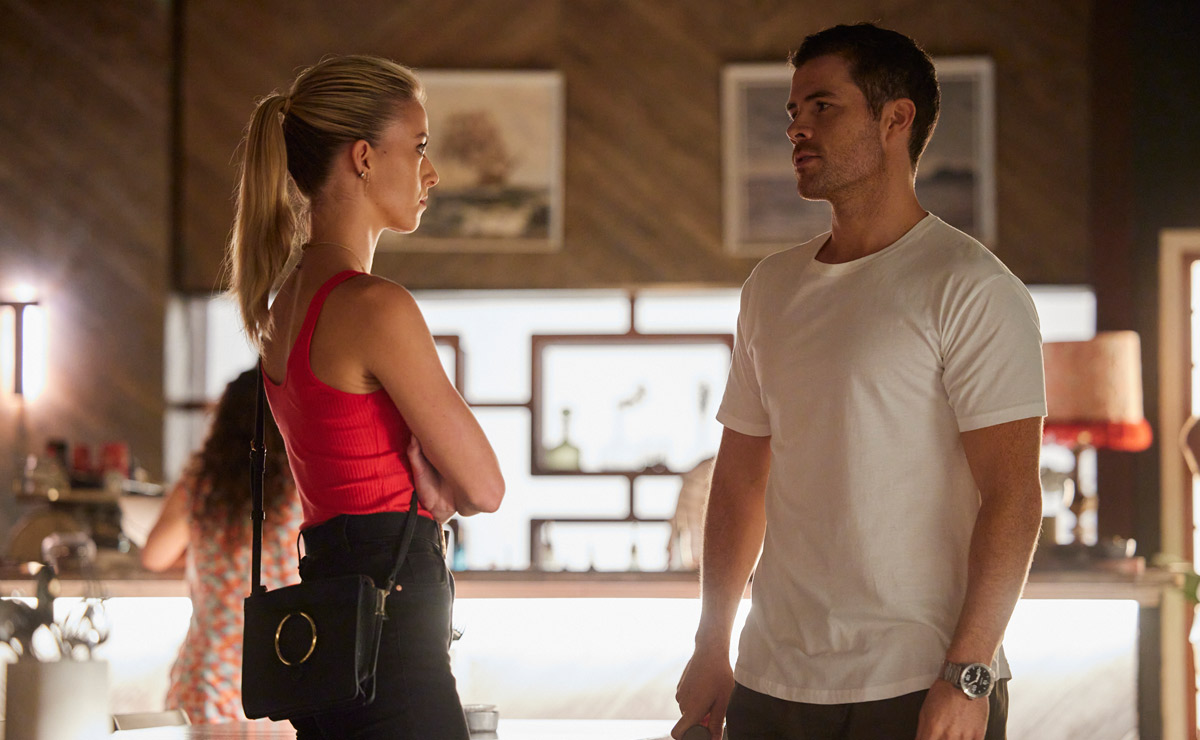 Tex complies, warning her that he’ll be seeing her again, before he makes a phone call to Marty to say that Tane has been talking. Tex is later frustrated to learn that Chloe has left the bay, and warns Tane that he can’t hide everyone that he cares about…

Back at the Parata house, Tane’s warning about the threat to Theo has made Nik think… can he guarantee girlfriend Bella’s (Courtney Miller) safety?

Bella is currently in New York on a three month work placement with former mentor Emmett (J.R. Reyne), but with that time coming to a close, Nik knows that Bella could be made a target. 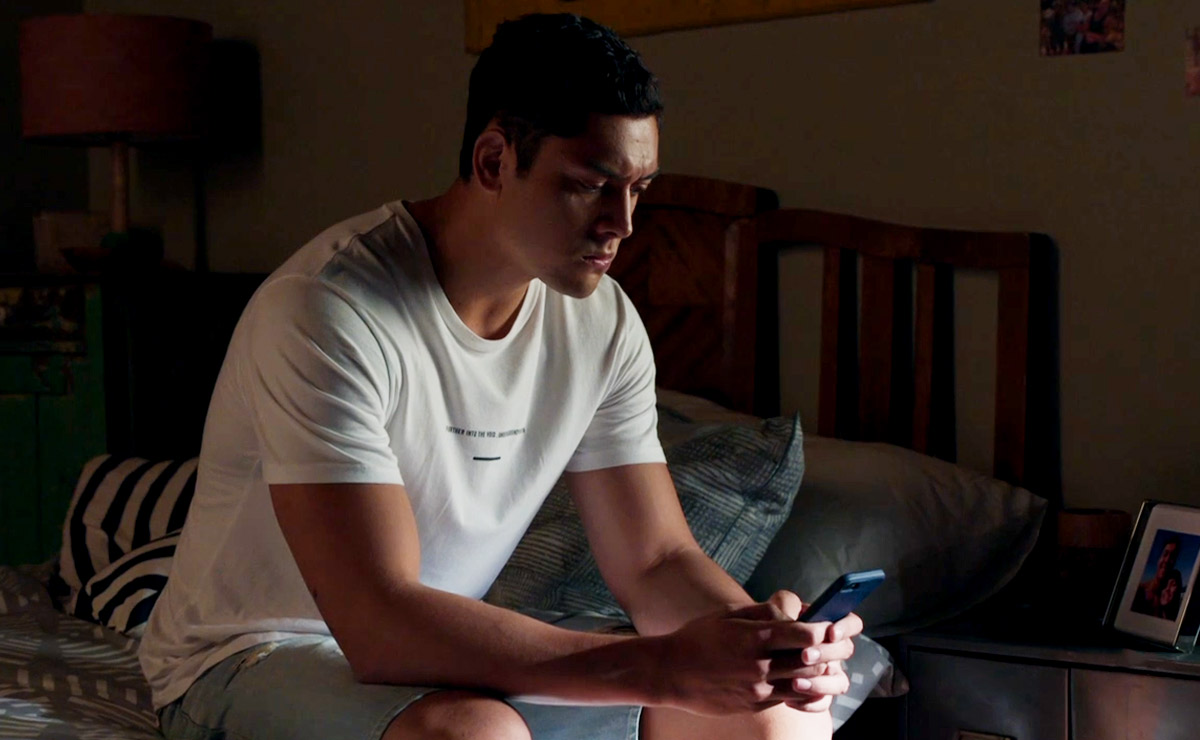 Knowing what he has to do, Nik struggles with his emotions as he places a video call to Bella… 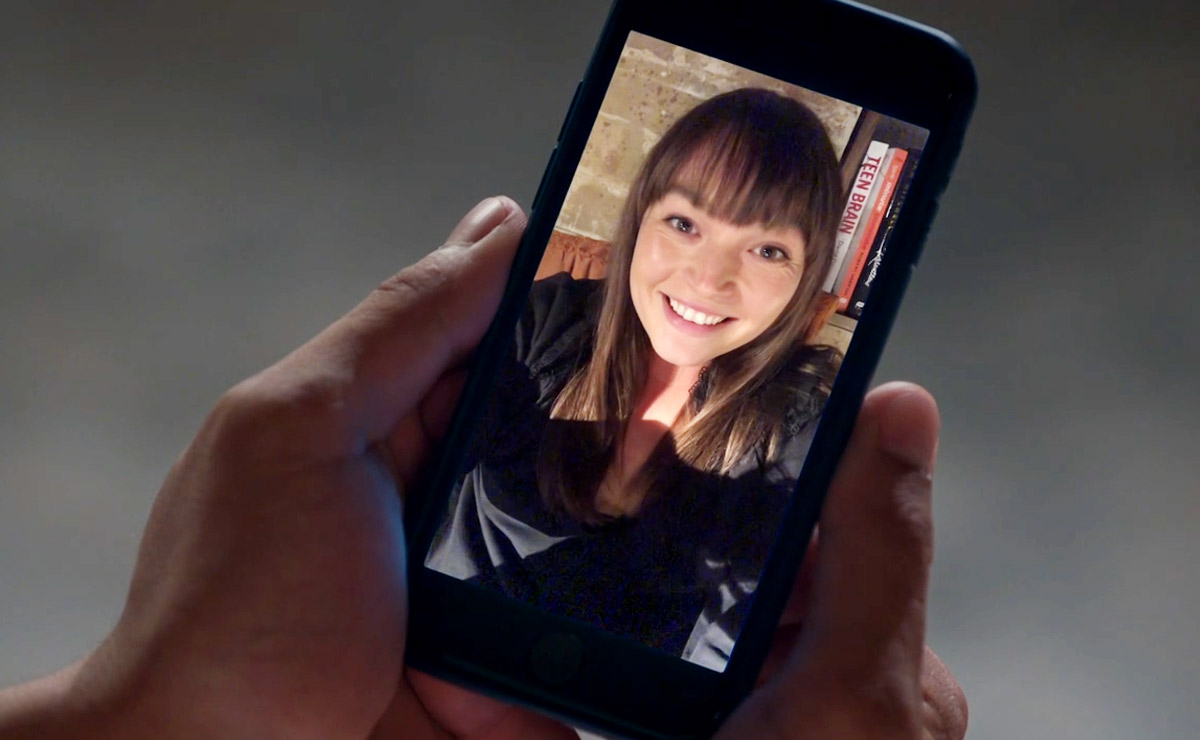 As we join her in New York, Bella excitedly explains that they’re nearly done with the job and she’s coming home early! 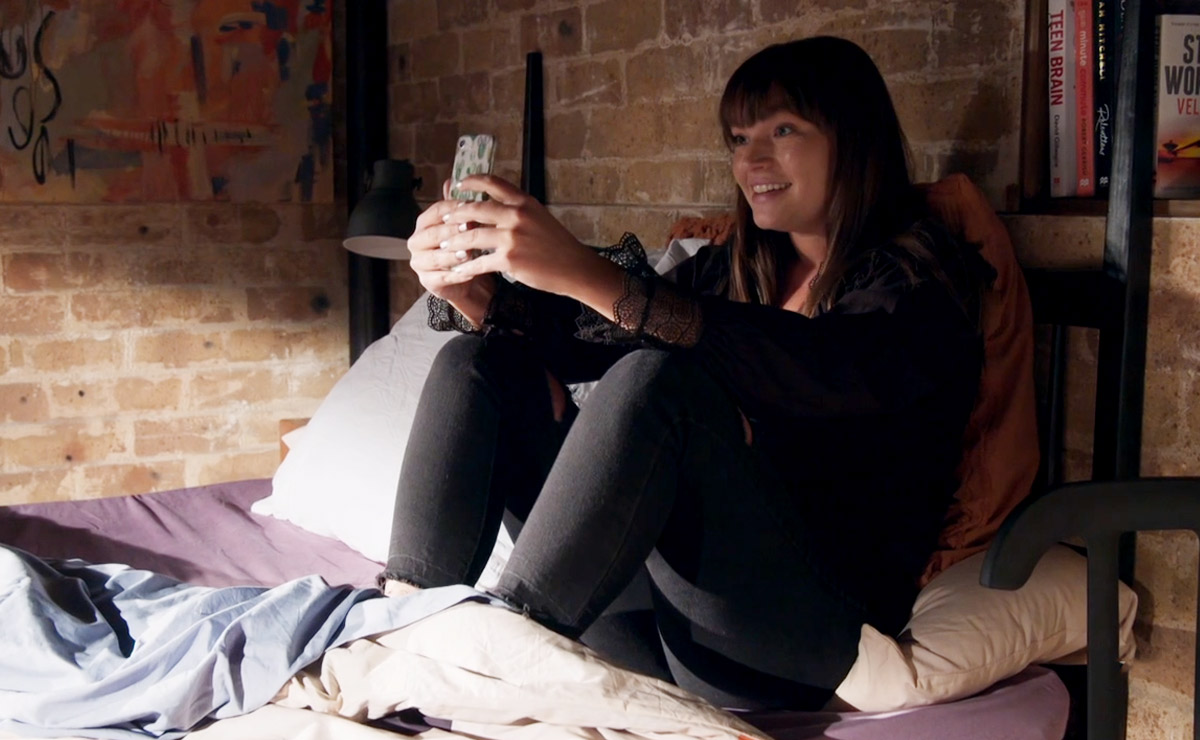 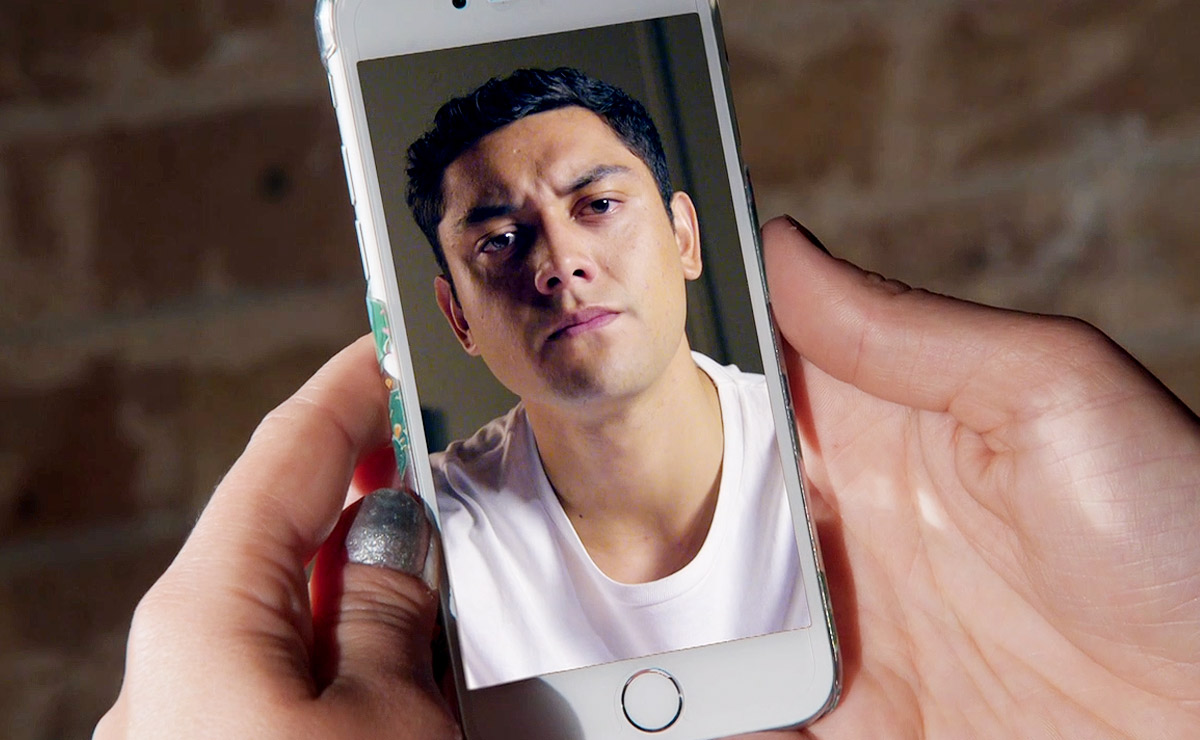 Nik should be excited, but he instead solemnly tells her not to come back.

It takes a minute for Bella to realise that he’s being entirely serious, as he explains that he doesn’t want her back in Summer Bay—there’s nothing here for her. 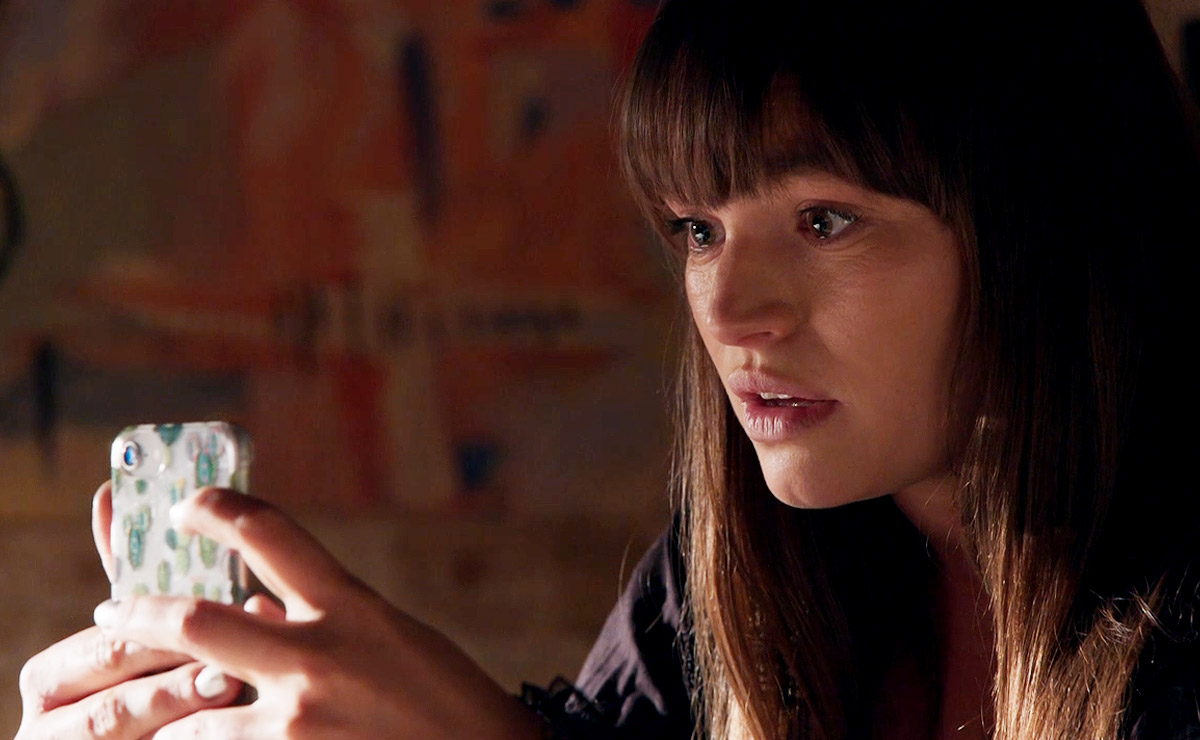 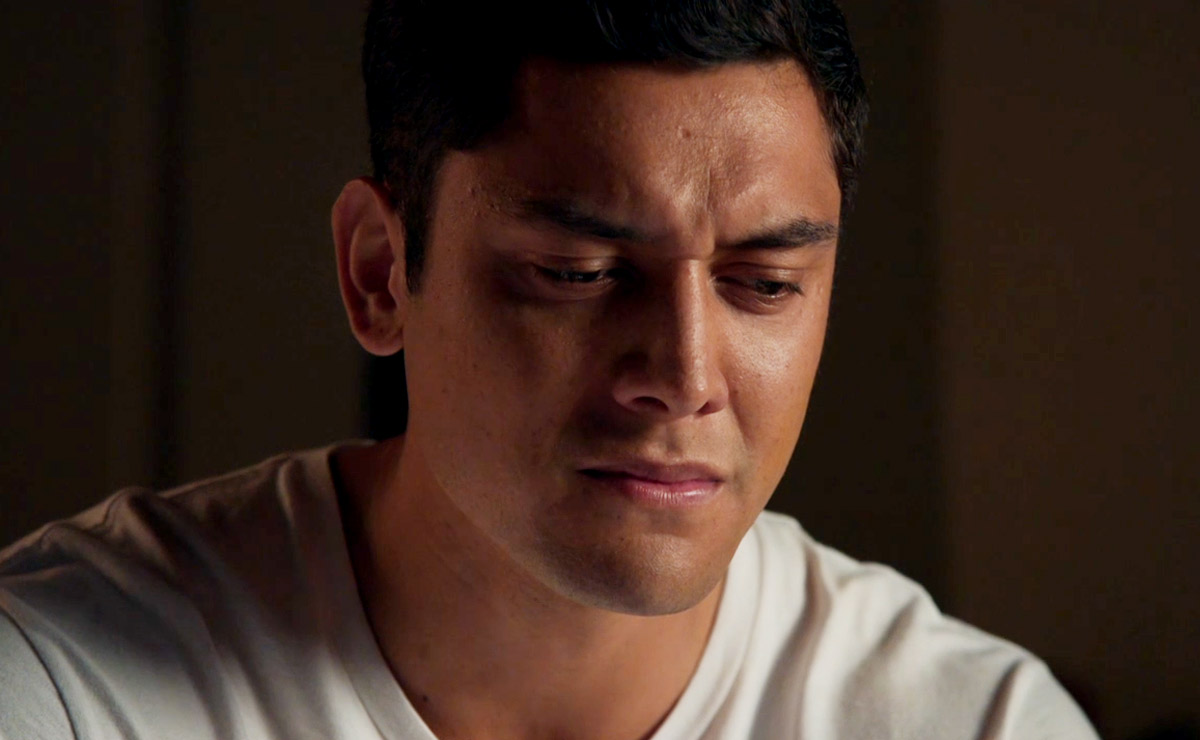 Nik puts on a brave face as he ignores a heartbroken Bella’s pleas for an explanation, coldly telling her not to call him again as he won’t answer.

As Nik hangs up, both he and Bella break down—it seems it really is the end! 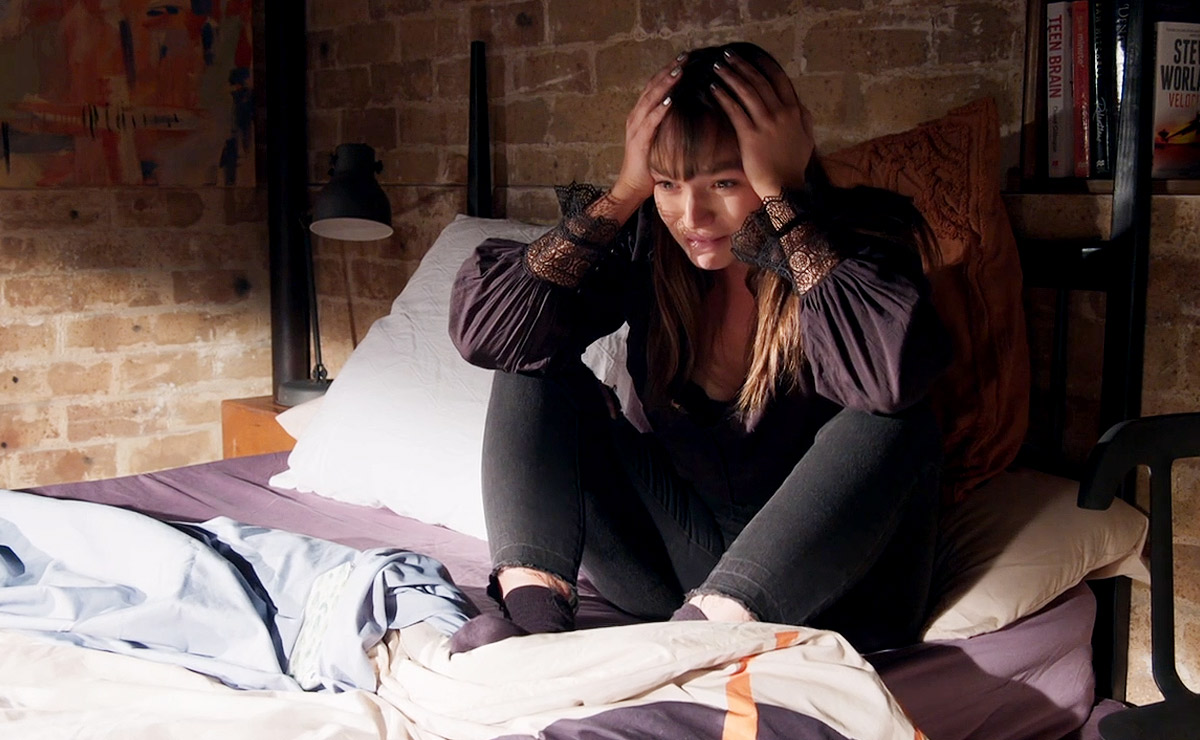 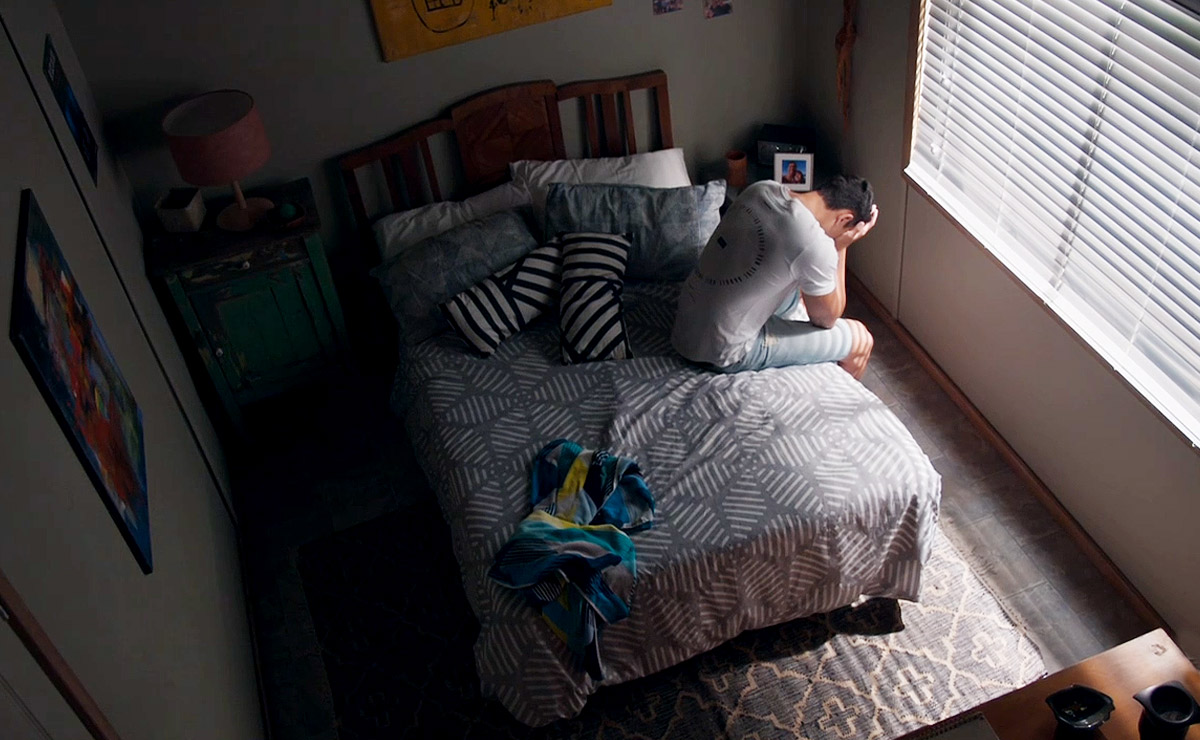 For a rundown of Chloe’s biggest storylines over her 17 months on the show, be sure to check out our Oz-paced farewell article! 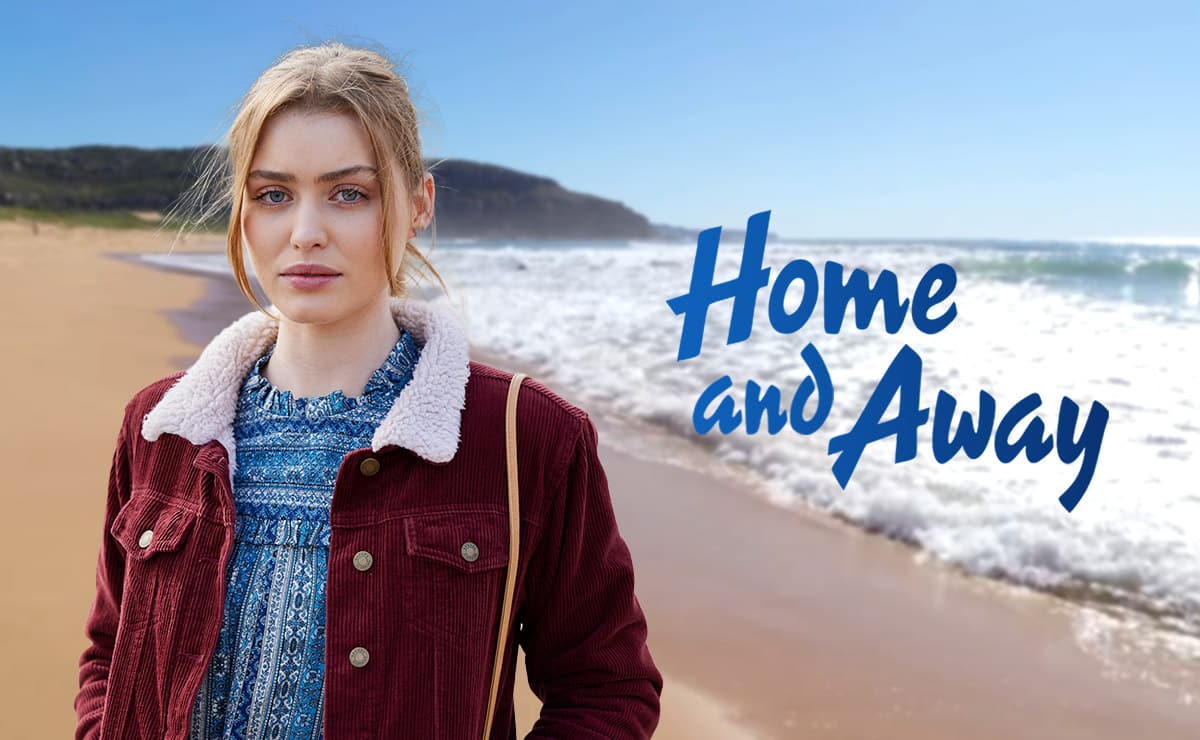 A Summer Bay star is born. Ziggy and Justin clash over Theo’s dreams. Felicity brings her boss-woman game to Salt.

The bikies refuse to negotiate. Tane rescues an endangered Chloe. Theo gets a life-changing call.

Rose investigates Tex. Irene’s family dinner blows up in her face. Xander admits he has a problem.