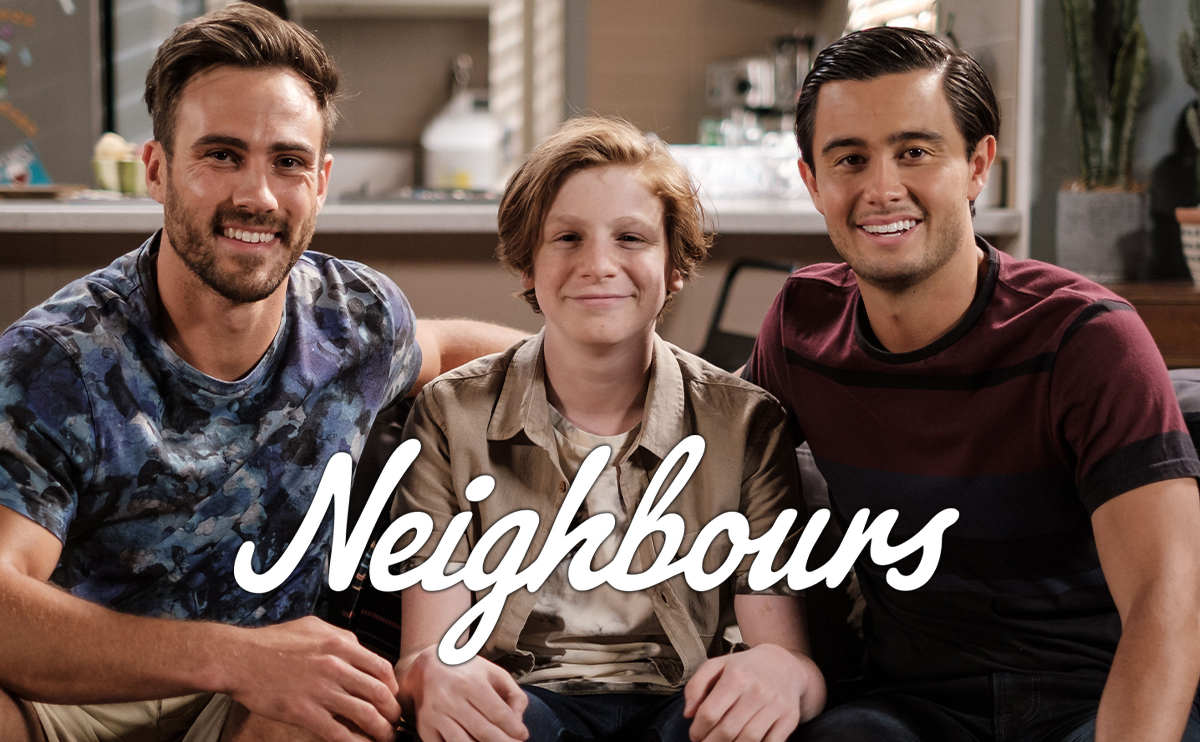 Coming up on next week’s Neighbours in the UK, when Emmett’s aunt announces she’s moving to New Zealand, he decides he wants to stay in Erinsborough to be closer to Brent… but Nicolette’s past could jeopardise his future with David and Aaron.

These episodes will air from Monday 12th April. 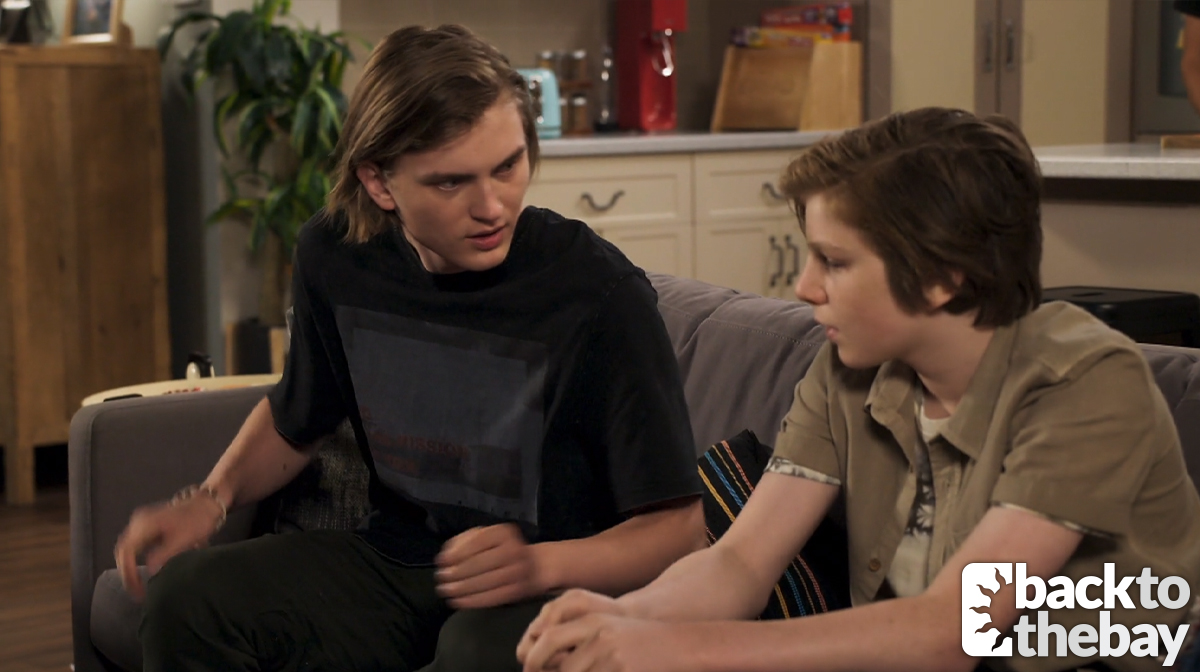 The impact that half-brothers Emmett Donaldson and Brent Colefax have had on the residents of Ramsay Street is extraordinary.

Emmett came to David and Aaron as a foster child back in June 2020, and his out of control brother Brent joined them soon after. Their presence resulted in Sheila getting injured, Harlow feeling uncomfortable in her own home, and David and Aaron questioning their bid to become parents. 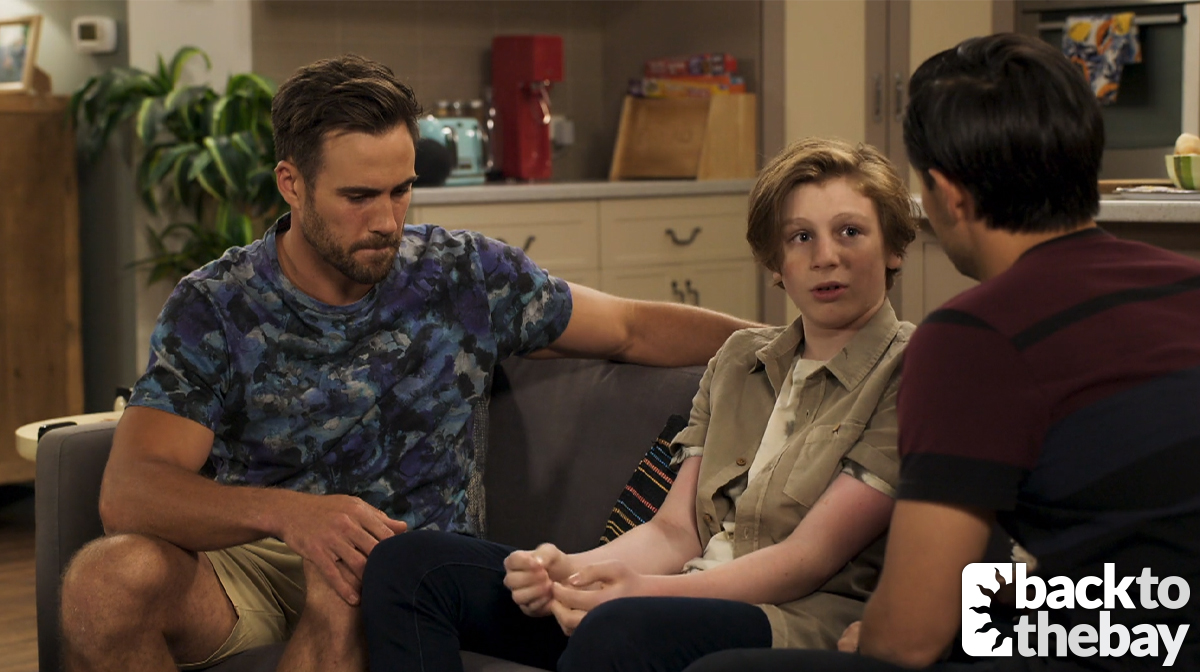 Fast forward to now and Brent has settled in Erinsborough as a much different, more mature version of himself, while Emmett is back living with his Aunt Linda. However, when she drops a bombshell on him, he turns to the only people he knows who can help.

Having just returned from Fay’s funeral, Aaron and David are sombre but are looking forward to what the future holds for them. However, no sooner does Aaron make a comment about how bright the future looks, than Emmett arrives in tears.

Shocked, the pair comfort him as he reveals that his aunty Linda is planning on moving back to New Zealand and wants him to go with her. Obviously he’s distraught – he wouldn’t be able to see his brother, and that’s something he does not want to fathom.

It’s quite obvious what Emmett’s idea is to stay in Australia. 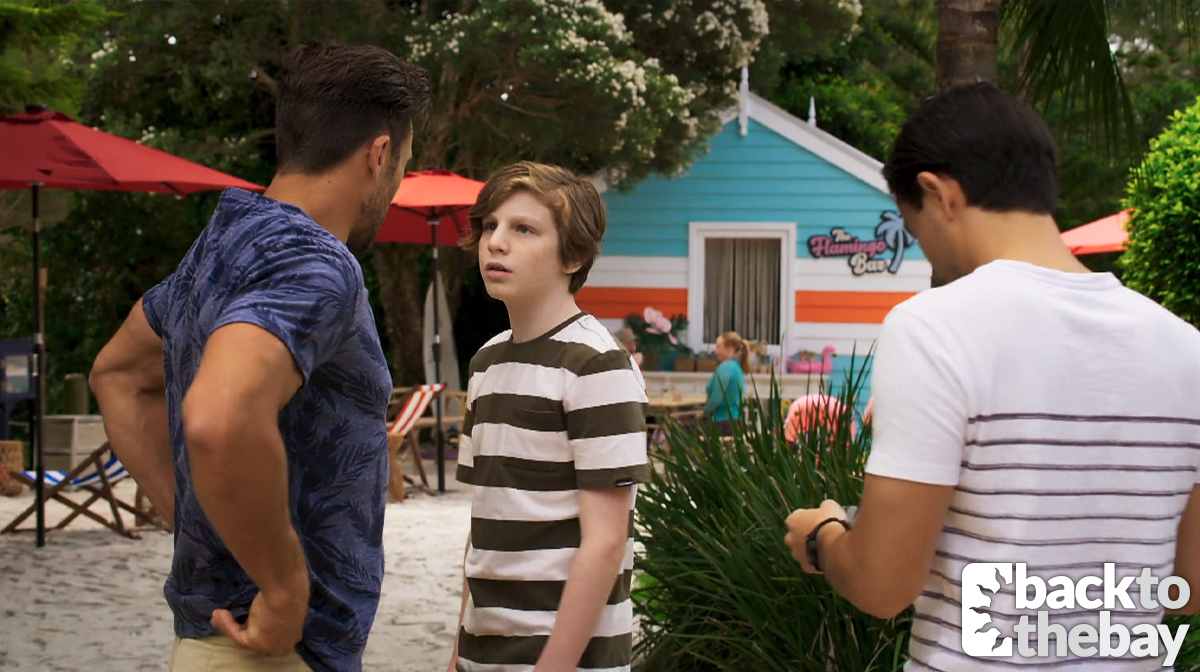 “Can’t I move in with you guys?” he asks of David and Aaron.

The pair are blindsided. They have only just organised for Brent to move in for the next few months. Plus, with Nicolette and Jane living with them, and a baby on the way, everything is a bit chaotic at the moment.

However, they entertain the idea and ask Nicolette about the prospect of Emmett moving in. Naturally, she’s all for it, but she’s worried what the fostering agency will say, considering she has a criminal record.

When they break this news to Emmett, he’s notionally worried. 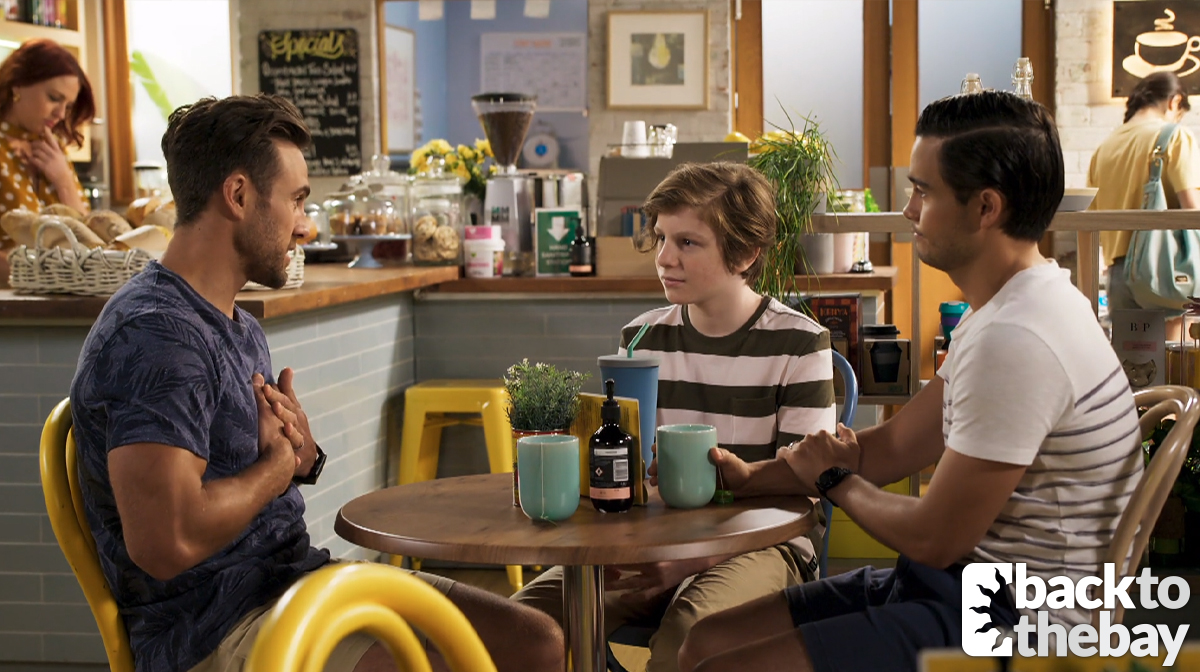 The next day, David calls the agency and learns that with Nicolette living in the house, it will be a definite no the them being able to foster Emmett again. It’s a blow to them, and when they have to tell Emmett, he’s disheartened.

Nicolette, ever the optimist, has a solution. She’ll move out of No. 32. That way, Emmett can move back in and be with the boys and his brother. Hesitant, David and Aaron worry about where the mother of their child will move to… that is, until Chloe walks in. Aaron suggests that maybe she could move in with Chloe at No. 24! 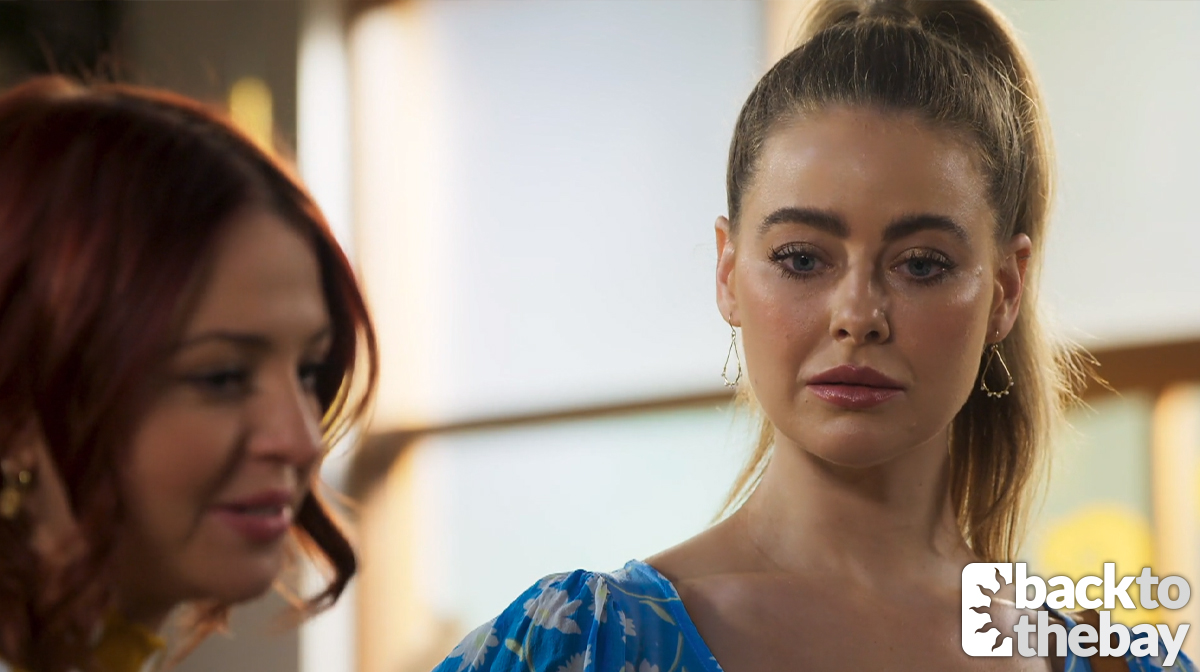 It takes the young executive by surprise, considering their recent awkwardness after a grief-stricken Chloe made a move on Nicolette. Nic does not think it is a good idea, but Chloe, on the spot, sides with Aaron. If Nic needs a place, she can move into No. 24.

Nic accepts, and as she begins to move in, the chemistry between the pair is palpable.

It’s not until Chloe is alone with Aaron does she reveal not only did she proposition Nicolette, but it was not entirely innocent either.

“I think I like her,” Chloe informs her brother. 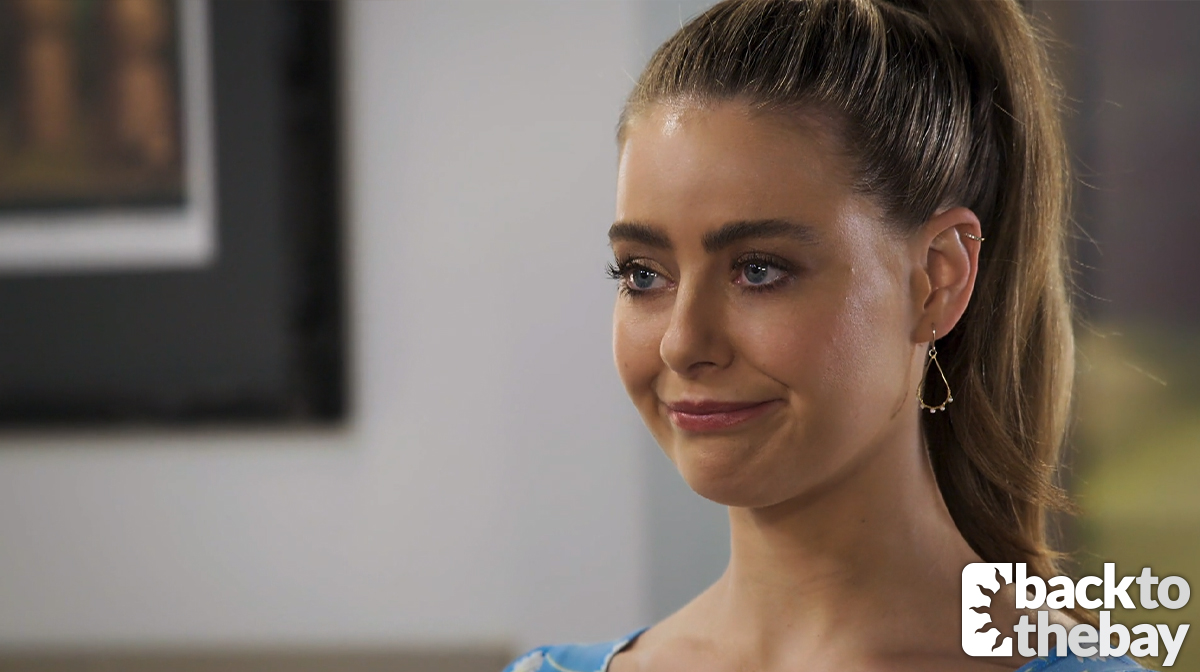 And she’s just agreed to let her move in!

Meanwhile, Brent’s conflict with Paul could land him in hot water this week as his attendance of a family lunch threatens to reveal his connection to Roxy’s attack. 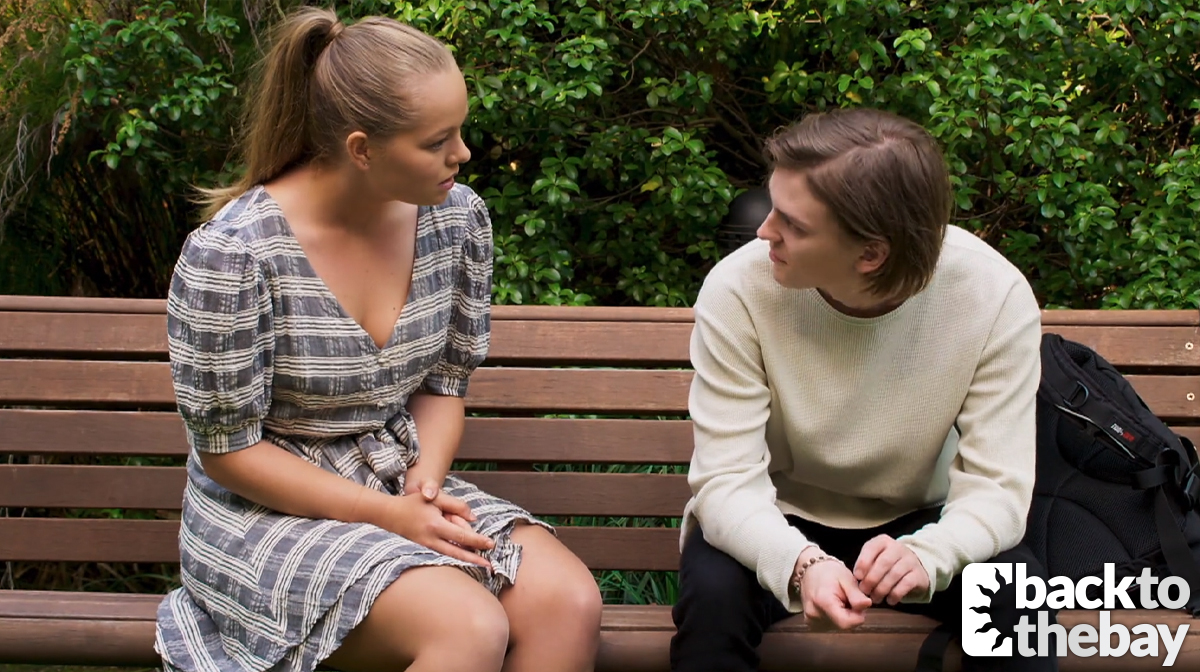 Poor Brent has not been able to cop a break since returning, and it seems that he has found himself in another sticky situation. After Roxy’s attack, Brent began receiving calls from a man named Holden, and not long after, was delivered a ring in an envelope – the exact ring found at the site of Roxy’s attack.

So, when Harlow brings up the idea of him coming to a family lunch that she has organised with the residents of No. 22, Brent isn’t sure. He claims that it’s because he can’t stomach Paul’s antics, but he’s worried what will happen if she, and Paul, learn of his connection to Holden.

However, she tracks him down at the Flamingo Bar and explains that this lunch is important to her, and she would really appreciate it if her boyfriend could make it. 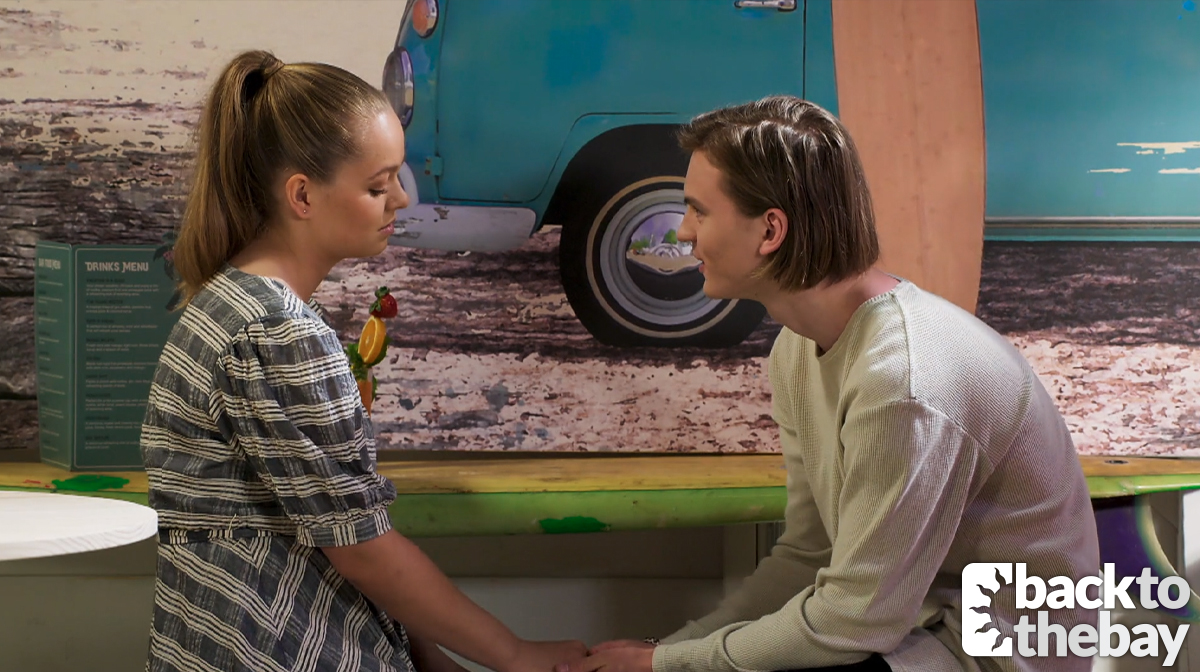 Brent pulls up at this. Boyfriend?!

Harlow confirms – if that is what he wants to be, he can be her boyfriend.

He’s elated, and the pair head to lunch. 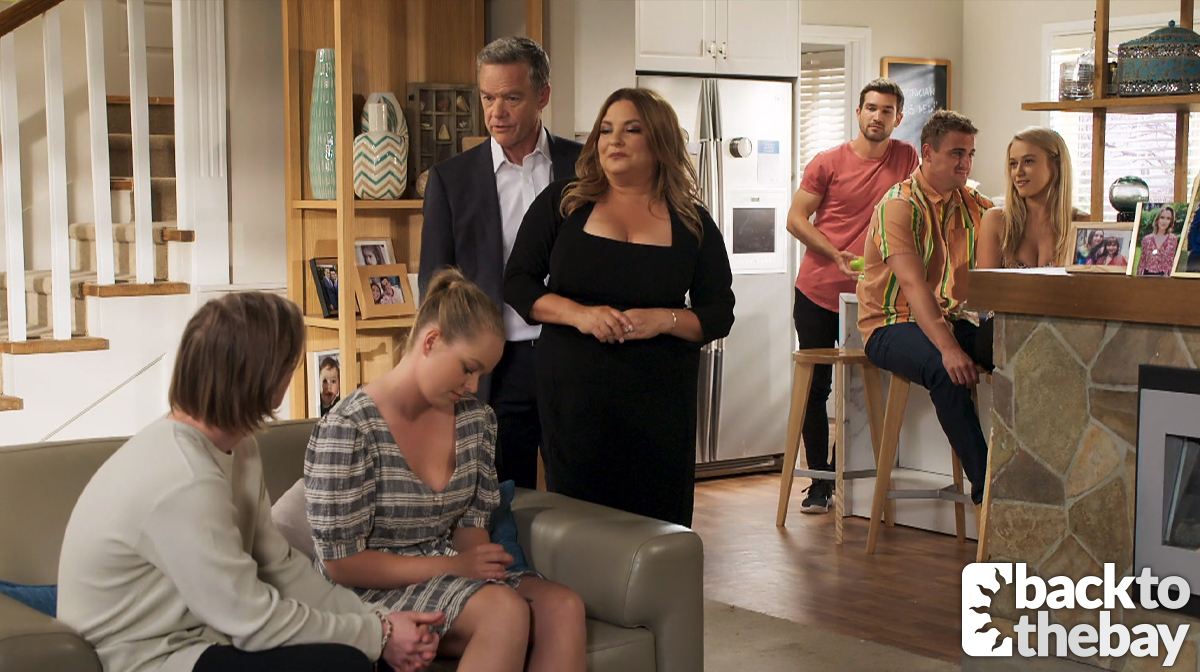 What ensues is a sparring match between Paul and Brent, but when Brent makes a valid point, Paul stops to think. Paul doesn’t like Brent and the feeling’s mutual, but they have to get along for Harlow’s sake because at the end of the day, Brent isn’t going anywhere.

It seems the young buck gets a one up on Harlow’s grandfather and a white flag of sorts is waved.

After lunch, Brent gets a call from Emmett and learns he’s staying in Erinsborough. Elated, he rushes off. 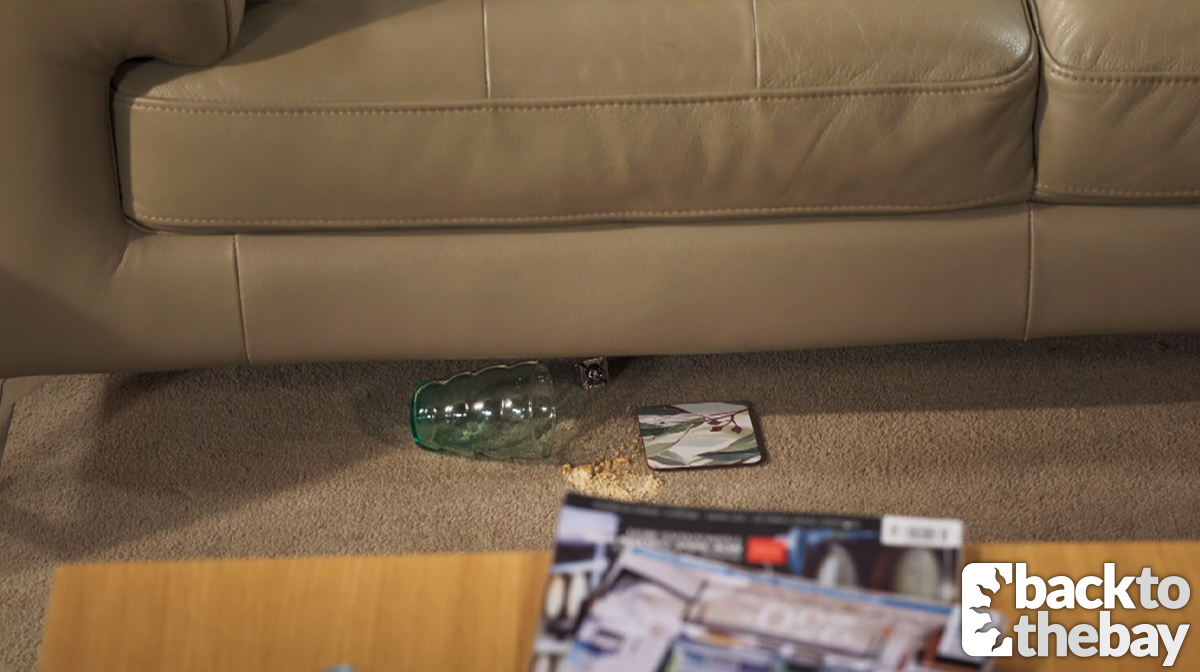 However, in the rush, the ring falls out of his bag and lands on the floor under the couch.

How long will it be before someone uncovers it and puts the pieces together?

Returning from Fay’s funeral, David proposes a new weekly tradition for the Brennans in her honour.

Believing that Karl caused her fall, Olivia tells police that he pushed her down the stairs.

Chloe and Nicolette have a much-needed conversation, making amends and resolving to move forward as friends.

After learning that his aunt wants him to move to New Zealand, Emmett rushes straight to David and Aaron asking is he can move in.

As Chloe and Nicolette spend more time together, Chloe realises she still has feelings for Nicolette.

Harlow proposes a family lunch so everyone can spend more time with Brent.

When Chloe tells Aaron about her feelings for Nicolette, he worries it could lead to a potentially messy situation.

Brent realises he dropped the ring at No. 22 and starts to panic.

Aaron and David try to persuade Linda to let Emmett live with them, but she is intent on taking him to New Zealand.

Nell is upset when she hears that Dipi and Shane are leaving as she doesn’t want to lose another mother figure.

Brent takes off before Leila’s home assessment, but returns home and impresses everyone, especially Leila.

Mackenzie questions her feelings for Richie and wonders if they are more than friends.

Karl remains racked with guilt over the part he played in Olivia’s accident, and although he talks things over with Olivia, the situation is far from over.

Seeing how upset Nell is, Dipi cancels their move to Sydney.

When Sheila crashes a romantic date Kyle had planned for Roxy, it becomes a tipping point and his temper boils over.