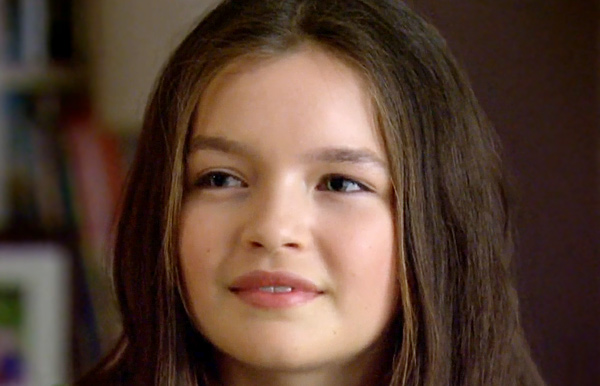 Rabbit was first seen in the opening week of 2010, where Miles found her standing over him after he woke up on the beach and wondered if he was in heaven. Rabbit noted her mother told her she might find something intriguing on the beach. She later turned up at the caravan park house moments after Alf left, telling Miles she was staying at the park for a while. She then challenged him to a game of chess and told him to call her Rabbit, explaining it was a nickname from when she was young and had a toy rabbit she was always looking for.

Rabbit soon became a regular companion of Miles and, during a game of poker, told him she was psychic, which she proved by correctly identifying the cards he drew out. She then fainted and told him she’d seen a fire and people hiding under tables. Miles suggested they go to the Diner where Rabbit fled after they stumbled upon the race riot. Miles found her hiding at the house and told her she’d helped people. She later tried to talk to Alf, who had been left in a depressed mood after the incident, but he failed to respond to her.

Miles woke up to find Rabbit standing over him in a trance; she told him if he fell asleep he would die. Miles stayed awake for days, doing jobs around the caravan park during the night to keep busy, and Rabbit told him to set the alarm on his phone to keep himself awake. This worked when Miles fell asleep at school and got up moments before a ceiling fan fell on the spot where he’d been.

Rabbit helped Miles clean up graffiti around the caravan park but Miles began to suspect Rabbit was responsible when he realised the graffiti was orange, a colour Rabbit often wore. He began a stakeout of the caravan park with Aden; after Aden had fallen asleep, Miles saw Rabbit sneaking about but tripped over following her and she denied it. He confided in her about letting slip to Elijah that Leah liked him. Rabbit was present when Miles spoke to Elijah about it but, as with Alf, Elijah didn’t respond to anything Rabbit said and seemed to misinterpret Miles’ comments to her.

Rabbit had Miles invite both Leah and Elijah over to dinner, then sent him to the surf club and locked them in a caravan. She kept quiet until they had sorted things out, then drew Miles’ attention to a message Leah had left on his phone, and was amused when he claimed he thought they might want to buy the van. Miles told her the graffiti had to stop if he beat her at chess but she beat him again, then told him serious news was on the way just before Elijah arrived to tell him about Vinnie dying.

After trying to reconcile Miles and Marilyn, Rabbit began to appear to Marilyn in a series of dreams, initially in a rabbit costume. She showed her Miles in a strait jacket, saying it was their fault; mentioned Marilyn was going to die soon (seemingly in reference to Mitzy Fraser’s prediction); and introduced her to Marilyn’s late son Byron, at the age he would have been if he’d lived. She also prompted Marilyn to go into the caravan park where she saw Miles doing the graffiti, apparently while sleepwalking. She then appeared to Marilyn covered in water and said Marilyn knew who she was, with Marilyn hearing the name Amber.

Marilyn found a sketch of Rabbit but Miles insisted Marilyn couldn’t have dreamt about her. When he beat her at chess, Alf commented on him not having much competition.

As Rabbit helped him clean a caravan, it was confirmed what had been hinted at for a while: Only Miles could see her, with it appearing to Alf and Marilyn that he was talking to himself.

Rabbit tried to get him to explain to them and blocked his path on the stairs, causing him to fall and break his ankle when he tried to get past her. With more prompting from Rabbit, Miles told Alf and Marilyn that Rabbit was the ghost of his daughter Amber, who had drowned in Phuket along with his wife during the Boxing Day tsunami in 2004.

Rabbit continued to prompt Miles, including following him around at school and telling him what to say to his class. Rachel puts Miles in touch with counsellor Michael Patton when it was confirmed nothing was physically wrong with him and he was advised to take anti-psychotic medication. Rabbit begged him not to, calling him Daddy for the first time, but he needed to see if she was real or not. He was distraught when Rabbit appeared to disappear, only for him to find her on the beach.

Miles tried to pretend that he couldn’t see Rabbit and was still taking the medication, but was soon caught talking to her by first Marilyn, then Alf and Martha, and finally Gina, who suspended him from school. He decided to resign and Elijah unsuccessfully tried to convince him to stop believing in her. Rabbit gave Miles a crossword answer that he was convinced he wouldn’t have got alone but he was frustrated when his apparently odd behaviour, saving a seat next to him, meant he had to leave a school play. He shouted at her to go and she disappeared.

Miles had a dream where Rabbit told him to warn Leah and Elijah of danger involving ponies, a farm and school children. Rabbit advised him to leave when he started scaring Leah. Elijah spoke to Rabbit through Miles but was unconvinced by her claim that she could prove she existed but shouldn’t have to. However, when Miles had a dream of Leah, Elijah, VJ and other children lying prone in a cave, Rabbit told him he needed to go now. She accompanied him on part of his search, learning they had gone caving on a school trip, and her prompts and earlier clues helped him find the party in a farm barn with ponies nearby, passed out from a gas leak.

Next day, Miles caught only glimpses of Rabbit until he realised she wanted him to meet her on the beach where he first saw her. They built a sandcastle together where she told him she had to go and he should probably go back to Michael. She added that her mother was waiting for her; Miles saw her mother in the water but Rabbit told him he couldn’t approach her. After she had said a fond goodbye to Miles, Rabbit and her mother disappeared.