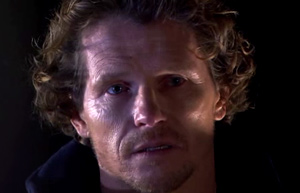 Don Gibson, better known as Gibbsy, was the skipper of the prawn trawler owned by Lou De Bono. Aden applied for a job as a deckhand but Nicole told him Aden was going to university instead. When Aden dragged her down to the wharf and got her to tell Gibbsy she’d made a mistake, Gibbsy revealed he’d already given the job to someone else. Lou interceded and Gibbsy ended up with two new deck hands: Aden and Joey Collins. On the pair’s first day, Gibbsy was irritated when Aden kept getting calls from Belle, which eventually led to Aden turning his phone off.

As they carried on working together, Gibbsy chided Joey for not cleaning the deck when in fact Robbo Cruze, the other member of the crew, had messed it up after she’d finished. He also took Robbo’s side when he criticised Joey for throwing away fish she deemed undersized and didn’t seem particularly bothered when Robbo knocked her overboard, leaving Aden to do most of the work rescuing her. When Aden quizzed him about the tension between the pair, Gibbsy assumed they were an item and it was a lovers’ quarrel.

Shortly after, a marine inspector arrived after Joey made a safety complaint. Although Joey (who had been raped by Robbo the previous day) withdrew her evidence, the inspector grounded the boat because of a number of irregularities. Gibbsy and Aden had to restrain Robbo from attacking him and Gibbsy then had to answer some questions from Charlie and Georgie over the incident.

With Joey having quit and Robbo having been jailed, the boat crew seemed to be reduced to just Gibbsy and Aden. Gibbsy noticed Aden was distracted while Belle was having drug problems. When Aden turned up late for work and Gibbsy made a comment about him being too busy being a nursemaid for Belle, Aden took a swing at him and missed and Gibbsy punched him back and broke his nose. Charlie and Constable Hogan arrived after Joey saw the altercation and called them but Aden didn’t press charges.

Gibbsy wasn’t seen for a while after that, until after Irene had inherited the trawler. When someone sank the trawler and he learned Aden needed the money to buy Belle an engagement ring, he put him in touch with a loan shark, Clint Mailer. Irene noticed some discrepancies in the amount of fuel the trawler was using and Gibbsy claimed Lou had been fiddling the books for tax reasons. When Gibbsy learned of the trouble Aden had had with Clint, he confronted the loan shark, telling him he needed to keep Aden onside. He then gave Aden the engagement ring which Clint had been holding.

With the problems over the sinking and the back tax, Irene considered shutting the business down until Gibbsy convinced her to carry on by saying he’d run the trawler for nothing in exchange for a share of the profits, insisting they’d be making a profit within two months. When he found out that Aden’s buck’s night basically consisted of Aden and Tony, he brought some friends along to the surf club to liven it up. When one of them, Squirt, suggested they get Aden involved in their sideline, Gibbsy took him to one side and warned him to keep quiet.

Irene was concerned when Alf thought Gibbsy was fishing in a prohibited area but Gibbsy managed to convince her he knew more about regulations than Alf did. He was concerned when he saw Angelo watching the docks, although Angelo was actually keeping an eye on Hugo, and annoyed when Squirt brought a faulty refrigerated van containing their haul from the previous night to the dock while Aden and Angelo were around. Hugo began to suspect Gibbsy was poaching abalone and Angelo also began to become suspicious of him. Hugo approached Gibbsy offering to buy some and arranged a meeting at the wharf that night, then sent Angelo a tip-off. Unfortunately, Angelo was distracted chasing Wayan Rahardjo and missed the trawler. Gibbsy dumped a box of abalone in Hugo’s shed and demanded payment as they agreed.

Aden, who needed a distraction after Belle’s death, asked Gibbsy for more work. Needing an extra hand for a night time poaching trip, Gibbsy invited him along and Aden agreed even though Gibbsy told him it was illegal. As they got back to the wharf with their haul, Hugo arrived and warned Aden the police were on their way. He and Aden fled, while Gibbsy and Squirt were chased by the police and arrested. Gibbsy refused to talk even though Angelo offered him police protection. Angelo tried to use him to expose the people smuggling operation by having him wear a wire and ask Hugo to smuggle him to Asia. As Hugo was reacting to the request with bemusement, the wire went dead and Angelo saw Hugo and Gibbsy driving off in Hugo’s vehicle. Gibbsy later turned up, saying he didn’t know the wire had gone dead and Hugo had just offered him a lift, and refused to help any further, demanding to see a lawyer (Angelo later speculated that Hugo had threatened him into staying quiet but this was unconfirmed). Soon after, Squirt made a full confession, leaving Angelo confident they had enough to convict Gibbsy.