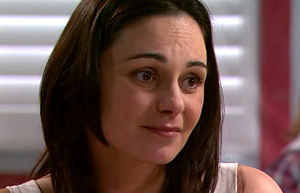 The wife of Grant Bledcoe, Tracey met Ruby when she came to the house calling herself Lucy and claiming to be looking for work as a babysitter. Tracey introduced Ruby to her children and, since she was on the way to a barbeque at her in-laws’ and needed to shower and change, agreed to Ruby looking after them. When she returned and found Ruby talking to Grant, Ruby revealed that she was Grant’s daughter and he had raped her mother. Both Grant and Tracey were furious at the accusation and threw her out of the house.

The following week, Tracey went to see Ruby in Summer Bay, meeting her at the Diner. She said she and Grant were back together and she had known him for ten years and been married to him for six. She insisted that, however certain Charlie was of what had happened between them, Grant couldn’t have done the things he was accused of.