Home » Home and Away Characters » A - F » Tasha Andrews 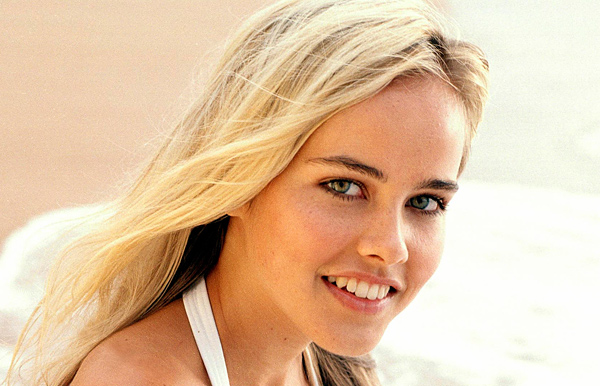 Tasha first appeared in the bay when Max was walking along the rocks. She appeared shocked by Max being there and jumped into the sea.

A day later Max went down to the rocks and Tasha appeared again. Max chased her along some rocks. Tasha fell and hurt her ankle. Luckily Flynn was nearby. Flynn took her to his surgery where Flynn and Max asked questions, but go no answers.

Flynn had her transferred to the hospital where she needed to sleep on a mattress on the floor, unable to cope with the furniture in the room. Tasha tried to make a break from the hospital, but was quickly sedated. Flynn, in attempt to communicate in many different languages, but none prompted any response from her. She finally responded, but Flynn was unable to work out what she was saying. After some research it was ascertained that Tasha was speaking Pig Latin.

With nothing medically wrong with Tasha she was soon going to have to leave the hospital, but they didn’t know where to put her. One day Tasha freaked out at the hospital and Irene was the only one able to calm her down and she agreed to look after Tasha.

Tasha had a few early scares in the Beach House, like getting burns on her hands when she saw a fire, despite being nowhere near it, and being scared of Kane, who was later revealed to, along with his brother Scott to have held Tasha hostage at a petrol station. However Irene was able to work out what Tasha’s name was, having until that point only been known as Jane Doe and Tasha began to pick up some English

Tasha also returned to school, but things didn’t run smoothly there either, getting into fights with pupils, trashing corridors etc. However she found a friend in Kit and Tasha continued to fit back into normal society, if you can call Summer Bay life that, though she was still prone to erratic moods such as trying to suffocate Kane when he moved into the Beach House.

Flynn returned from the city with the news that Irene had been waiting for, Tasha’s mother was none other than Angela Russell. The resemblance was uncanny. Before Irene had a chance to decide what to do Tasha was leading the rescue effort for The Sutherlands towards the mineshaft. Irene decided to keep the information about Tasha’s mother from here, but Tasha soon found the birth certificate. Tasha took it and later in the week Irene was looking for it. Tasha went to Max and showed him the certificate. Max was shocked at her identity and quickly got an excuse to walk off.

Tasha then questioned Irene about her parents, but Irene tried to sidestep the question. Tasha then went around to the Sutherland’s where she revealed who her mother, but when they realised her identity they were also cagey with the truth. Tasha revealed to Irene that she had the letter with her parents on and was really angry with her. Feeling like she couldn’t trust Irene she decided to leave and live in the bush.

Robbie then tried to set up a trap in the bush to catch Tasha, but ended up catching himself. Whilst out in the bush Robbie was bitten by a snake and Tasha had to run and get help. After this happened Tasha decided to return home to Irene’s after Flynn talked her around. After this Tasha and Robbie began to build up friendship before sharing their first kiss soon after.

Tasha next got in trouble when left alone at The Beach House with Robbie in the aftermath of Hayley’s accident she decided to go on a naked run through the bush, which led to them getting caught by the police. There troublemaking didn’t stop there, when they started taking days off school to “help birds that had fallen out of trees”. Tasha continued to get in trouble at school when she banned from wearing the boys uniform.

Tasha and Robbie soon became friends with new kid in town, Kim Hyde. Tasha, unknowing of the etiquette of a relationship soon began kissing Kim. When Robbie found out about this he broke up, but they soon got back together. There troublemaking continued however when Tasha gave Kim the keys to Irene’s car and they subsequently crashed it. Tasha then stayed in the school during the sit-in, but struggled within in the confined spaces of the school.

Not a lot happened to Tasha until Duncan gave her Seb’s video of Angie being framed. Tasha had a dream in which she saw her mum and soon after she went running out into the bush with Irene where they dug up a chest. In the chest were guns, money and a few notes. One contained the identity of Tasha’s father. Duncan got a hold of this along with the guns and blackmailed Tasha into giving him the money to fly to New York in return for the letter containing her fathers identity. Kim and Robbie tried to get rid of the gun by throwing it into the ocean, but Tasha soon swam out and got it.

Soon Tasha was trying to spend the money on gifts for her friends, but they politely turned her down. Irene’s curiosity began to get the better of her and she started searching through Tasha’s room. All that she found was a letter from Tasha that she would hate Irene forever if she searched her room and moved out to the Sutherland’s. Rhys became appalled by Tasha’s behaviour and so she ran out of there too finally ending up at Sally and Flynn’s.

Tasha was hiding the money out of the bush and worried about it’s safety, Robbie and Kim tricked Tasha and returned it to Flynn. Tasha found about this and ran away to the city to try and find out more about her father, Ian Osbourne. Irene thought she had ran away to the bush. Whilst out there someone stole some of her belongings.

Kim and Robbie drove down to the city and managed to convince Tasha to return. Back, Irene and Tasha made up. Tasha then took her out to the bush near where Irene’s stuff was stolen and showed her an old friend, Pam. Her son had stolen Irene’s stuff and whilst they were talking, Pam mentioned that Angie had an identical cousin.

Whilst at the Hayley and Noah’s wedding, Sarah Lewis had broke into the Beach House and stolen Tasha’s gun. Tasha was really guilty when Jesse got shot with it.

Robbie and Tasha also began to think about going a step further with their relationship at this time. However at the last moment Robbie chickened out. After a few frosty moment between the two they decided to wait until the time was right.

Impressed by how Tasha was maturing, Irene got in touch with her brother Dylan who came to the bay to see her. Whilst there she mentioned the aunt to him and Dylan managed, along with his gran, found where Josie lived. Irene got in contact her, but decided that she didn’t want Tasha to get in contact with her. However Josie used her contacts to find Irene and came to Summer Bay to visit Tasha. With Sarah escaped Irene and Tasha to the city to see Dylan.

After Noah’s shooting, Tasha felt really, really guilty and with no one able to make her feel better Robbie got in contact with Josie, who eventually managed to cheer Tasha up. Josie then decided to move to Summer Bay to be near Tasha. Josie also got in contact with Ian about finding her daughter, and whilst Tasha was performing at the Noah concert, Ian had the Beach House bugged so he could watch his daughter. Strange things began happening around the Beach House and it was revealed to Irene, by Josie and Morag who Tasha’s father was.

Ian phoned Irene and told her that he wanted to get in contact with her. She went along and offered a her a huge amout of money. Irene rejected it saying that Tasha was more important and the camera were removed from the house.

Tasha soon decided that she wanted to get in contact with her father and Josie managed to arrange this for her. Whilst there Ian was purposely mean to Tasha, knowing that his world would destroy her. Tasha was really upset at how the meeting had gone, but in the long run it was what was best for her.

At the beginning of 2005 Tasha, Robbie and Kim went on camping trip in the bush. Whilst out there Robbie stood on a needle and as a result this began to cause him to behave erratically like stealing Kim’s car and jumping off Jump Rock. Tasha broke up with Robbie after this. Robbie’s behaviour soon improved, but it wasn’t until Tasha was trapped out in the bush after the plane crash, badly hurting her ankle, that she realised how important Robbie was to her and they got back together.

Josie then asked Tasha to be her bridesmaid for her upcoming marriage to Jesse. Tasha accepted, but then she soon found out from Josie that she had been doing the dirty on Jesse with Marc. At the wedding Josie and Jesse were just to be announced as man and wife when Tasha said they couldn’t go through with the wedding.

Later on in 2005 Tasha joined a cult called the Believers and this caused great tension between her and her ‘husband’ Robbie at the time. Robbie was adamant that the Believers weren’t as nice and normal as they claimed to be. Tasha however despite several warnings went to live with him ignoring Robbie’s warnings. As you can imagine this upset Robbie but he never relented and he tried on several occasions to get Tasha to see sense.

Tasha got closer to a cult member named Jonah whose mother was called Mumma Rose. She believed that Tasha was the woman to give birth to the chosen one. Tasha was drugged and raped by Jonah but it was later proven that Jonah hadn’t raped her as he was in fact sterile. After police intervention Tasha left the believers camp and gave birth to a baby girl. She found it incredibly hard to bond with her daughter who Robbie named as Ella. Ironically Robbie who loved Ella even though he didn’t believe or know that Ella was his biological daughter managed to get through to Tasha and she bonded with Ella.

Mumma Rose had managed to get out of prison and came looking for Tasha and her baby who she believed to be the ‘chosen’ one. In order to get Ella she instructed a cult member called Charity to get closer to her and gain her trust; Charity managed to gain her trust and successfully kidnapped the baby. Mumma Rose attempted to carry out a purification ritual but Tasha managed to get away with help from Rachel who had been kidnapped to help. Mumma rose then suffered a breakdown as a knock on effect.

Robbie later was revealed to be the person who turned the life support machine off of his granddad Graham Walters. After being acquitted of the crime, Tasha and Robbie got an offer from Josie to join her in Boston. Tasha and Robbie accepted and went to live in the States.