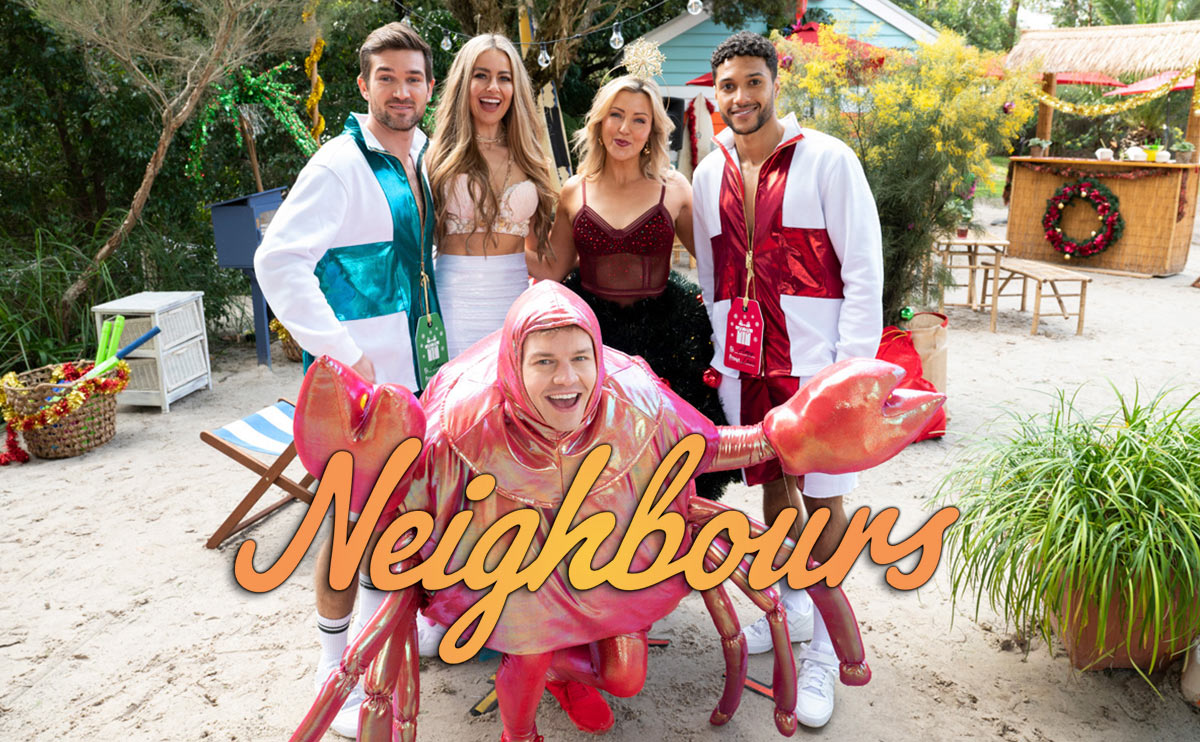 Coming up on Neighbours in the UK and Australia, Nell becomes obsessed with the idea of talking to Sonya, while Mick crashes the Flamingo Bar Christmas function, with embarrassing consequences.

Losing a parent is one of those tragedies that a lot of people are forced to endure in their lifetime, but one that people yearn to never experience. 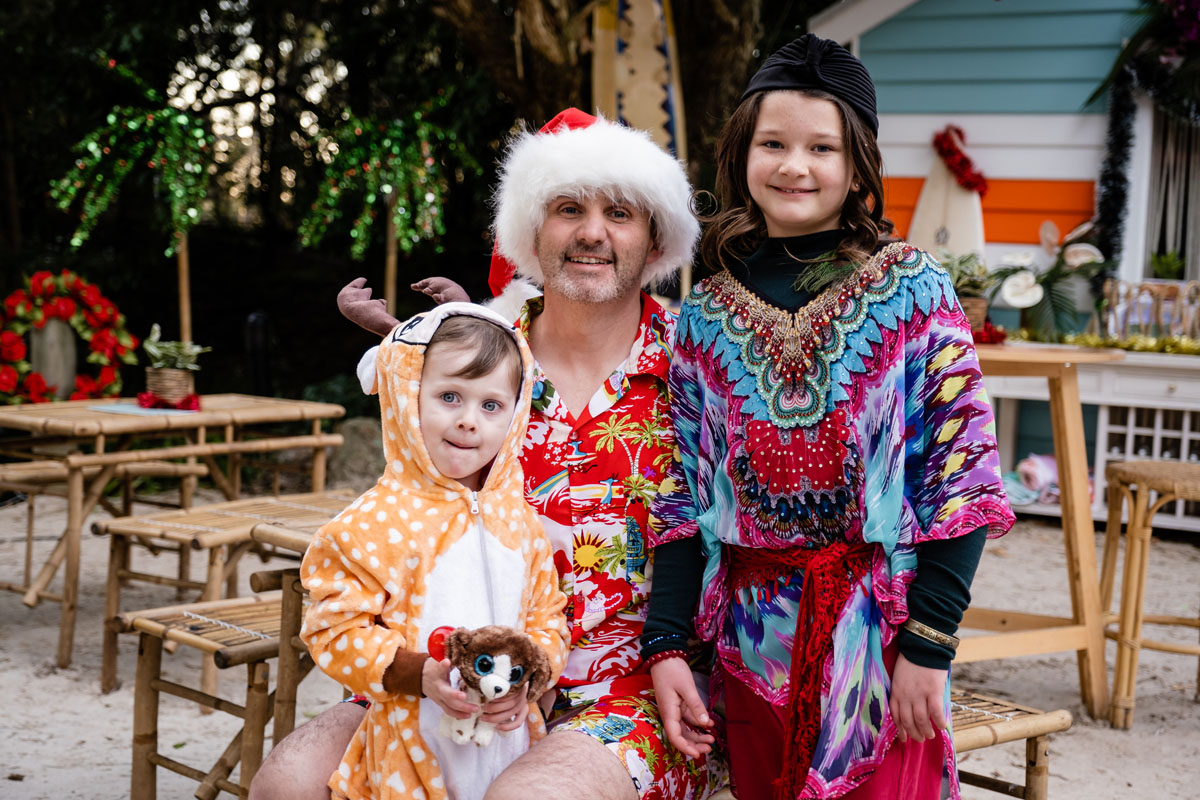 For youngster Nell Rebecchi (Scarlett Anderson), she was forced to experience the loss of a parent at the tender age of 6.

Her beloved mother Sonya (Eve Morey) passed away as a result of ovarian cancer, leaving her father Toadie (Ryan Moloney) a widower. 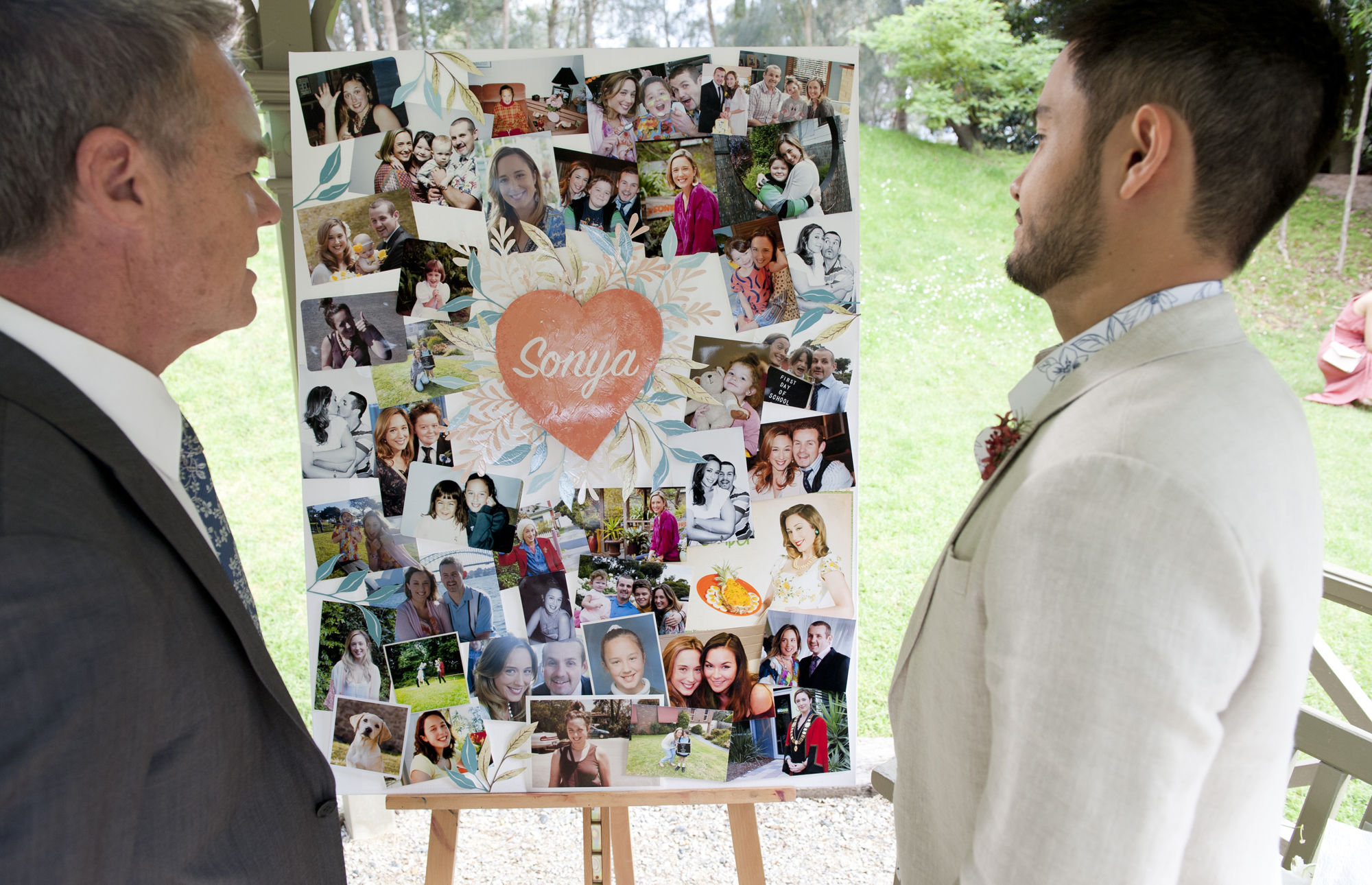 Sonya’s passing was felt by all at her memorial service in March 2019.

For the last two years, Toadie has done everything in his power to keep Sonya’s memory alive in the minds of their daughter and her stepson Hugo (John Turner). Although there’ve been a few ups and downs, Toadie and his new partner Melanie (Lucinda Cowden) have always been able to help Nell feel close to her mother.

This week, Nell notes that Melanie has dressed up as a fortune teller for the Flamingo Bar’s inaugural Christmas event.

Seeing this gives her an idea – she wants Melanie to contact Sonya and be the link between the living and the dead.

It’s a big request, and Melanie, being who she is, grows flustered at the request. Unsure of how to react and not wanting to let Nell down, she pretends to contact Sonya through her crystal ball. 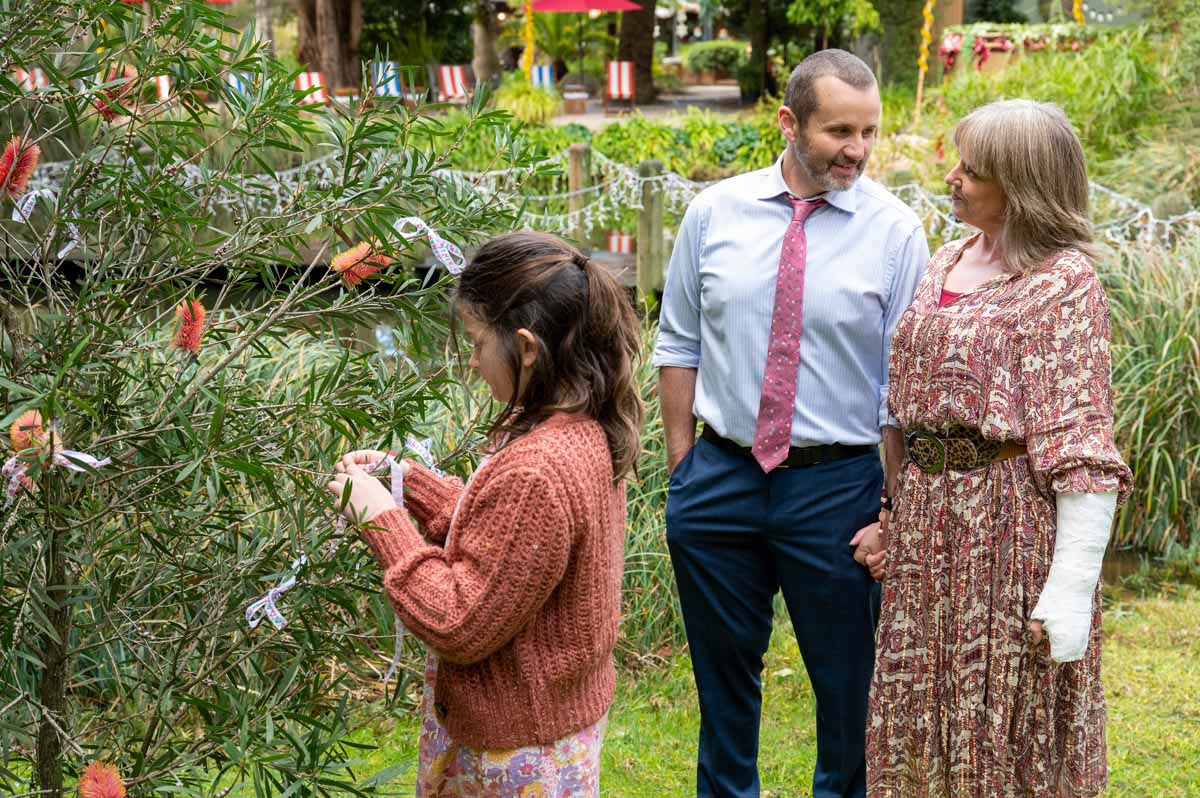 Appeasing Nell, Melanie tells her that Sonya likes her dress. Although Melanie worries she might have done the wrong thing, Toadie reassures her that this will pass, just like all the other times.

Only, this time it doesn’t. Nell refuses to take off the dress that Sonya supposedly loves and when Toadie attempts to hide Melanie’s crystal ball, Nell tracks it down.

As a squabble for the ball ensues, it shatters, leaving Nell devastated.

Before long, Toadie and Melanie realise that what Nell truly wants is a lasting connection to her late mother. 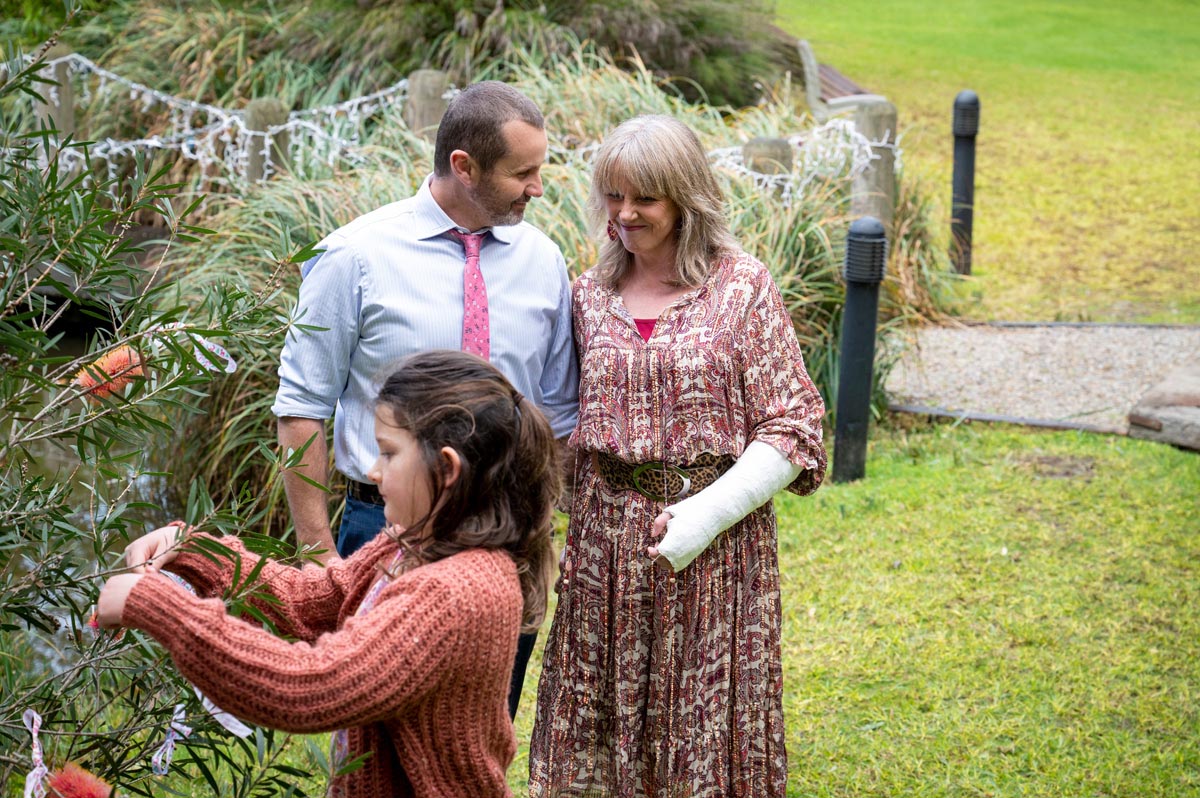 The couple take Nell to Sonya’s tree, and she soon realises that she can come at any time to feel like Sonya is right by her side. 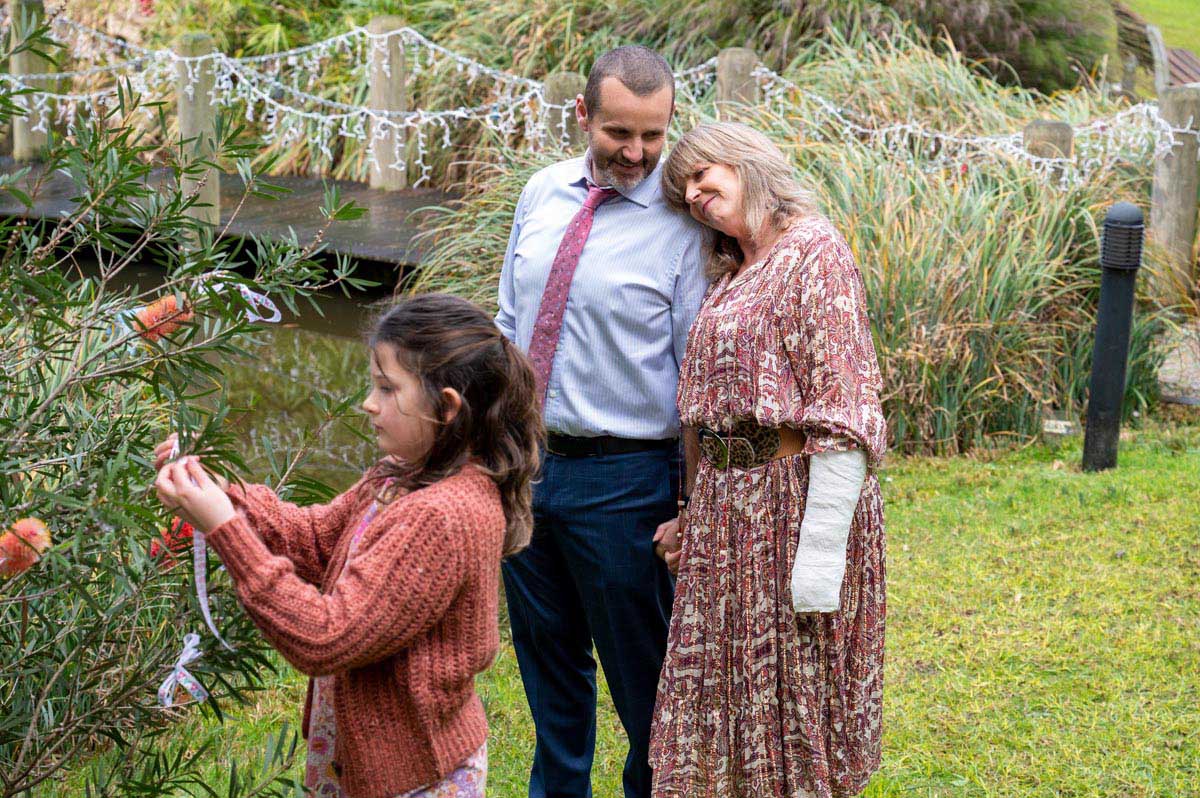 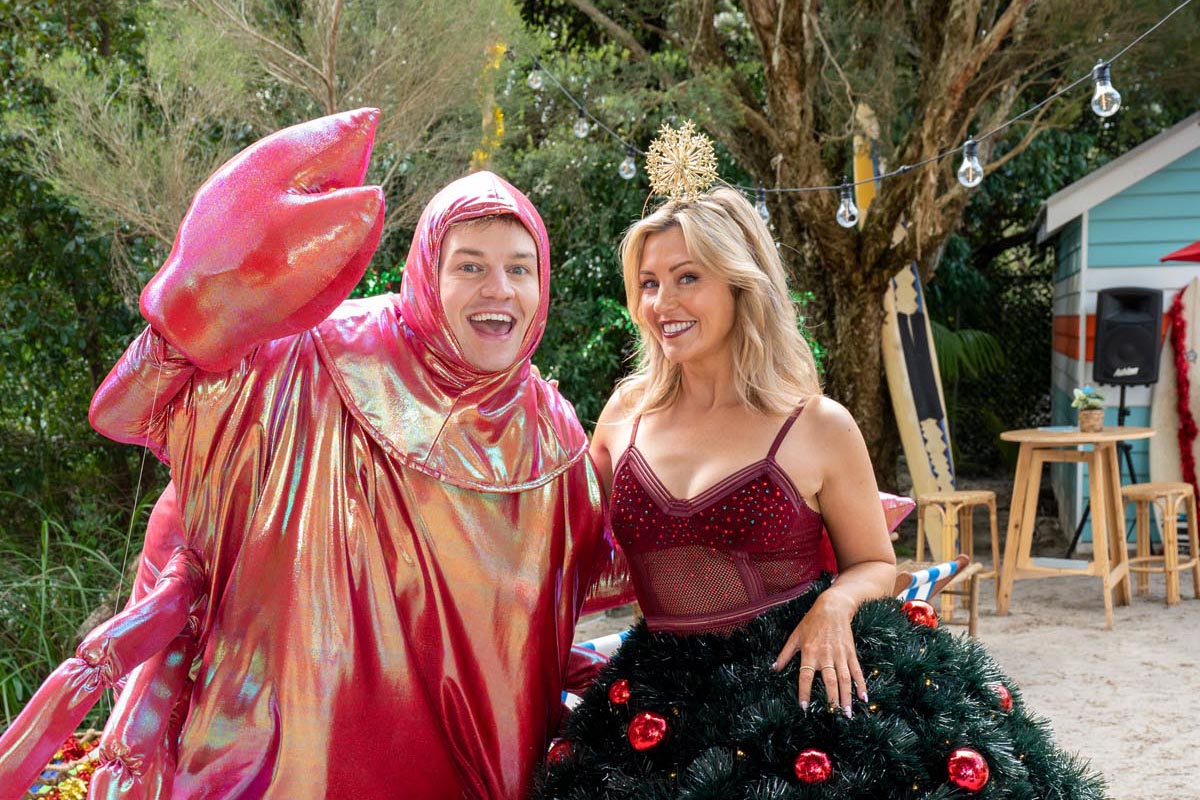 Last week, he blackmailed Amy (Jacinta Stapleton) into staying silent about the fact that he’s squatting at Lassiters, in order for him to stay in his job.

Having found out she may be part of the reason for the crabs outbreak currently spreading around Erinsborough, Mick threatened to reveal the truth if Amy went to Chloe (April Rose Pengilly) about his lack of professionalism.

“Talk’s just started up around the hotel of a little itch that’s been circulating,” he told her, in reference to the outbreak.

This week, Karl begins to place ‘Public Service Announcement’ posters around Lassiters, warning of the circulating itch, as it spreads to both Sheila (Colette Mann) and Vera Punt (Sally-Anne Upton).

Soon after, Mick makes it known that his threat to reveal the source of the itch is far from empty. 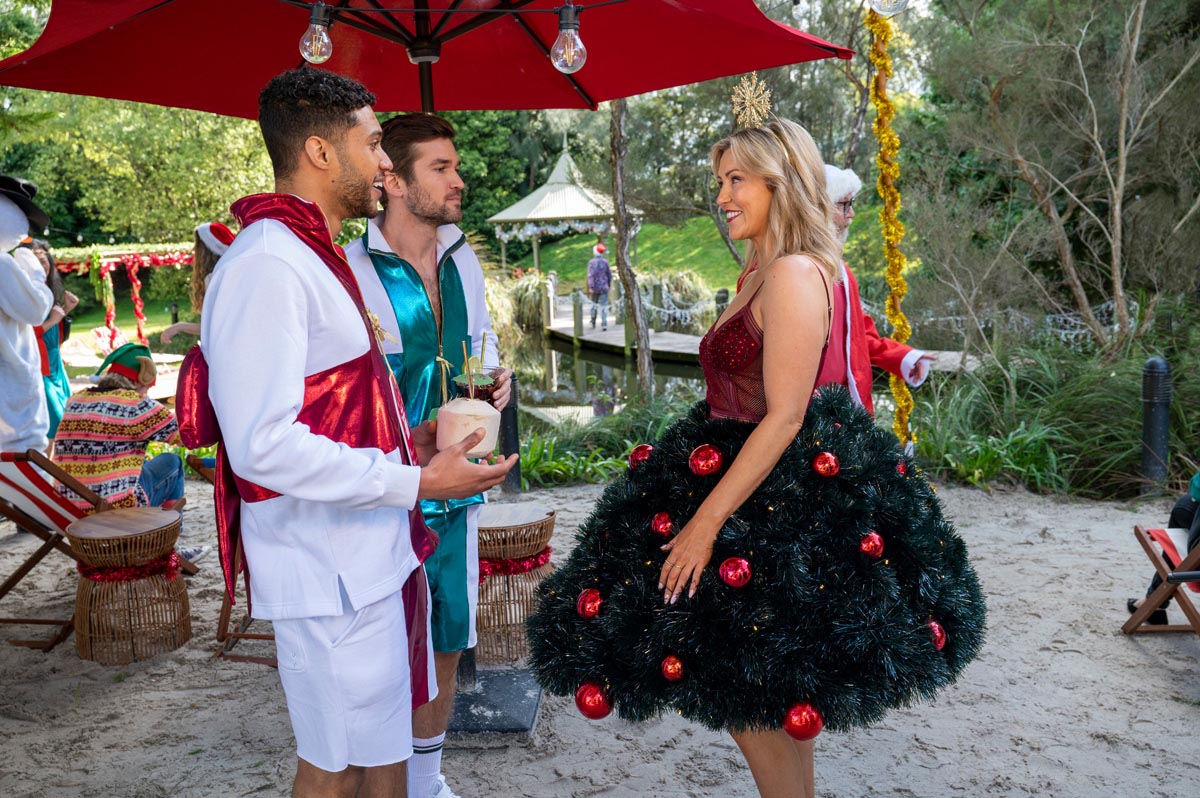 As the festivities kick off, Amy dons a Christmas tree outfit, while her two boyfriends Levi (Richie Morris) and Ned (Ben Hall) dress as gifts. 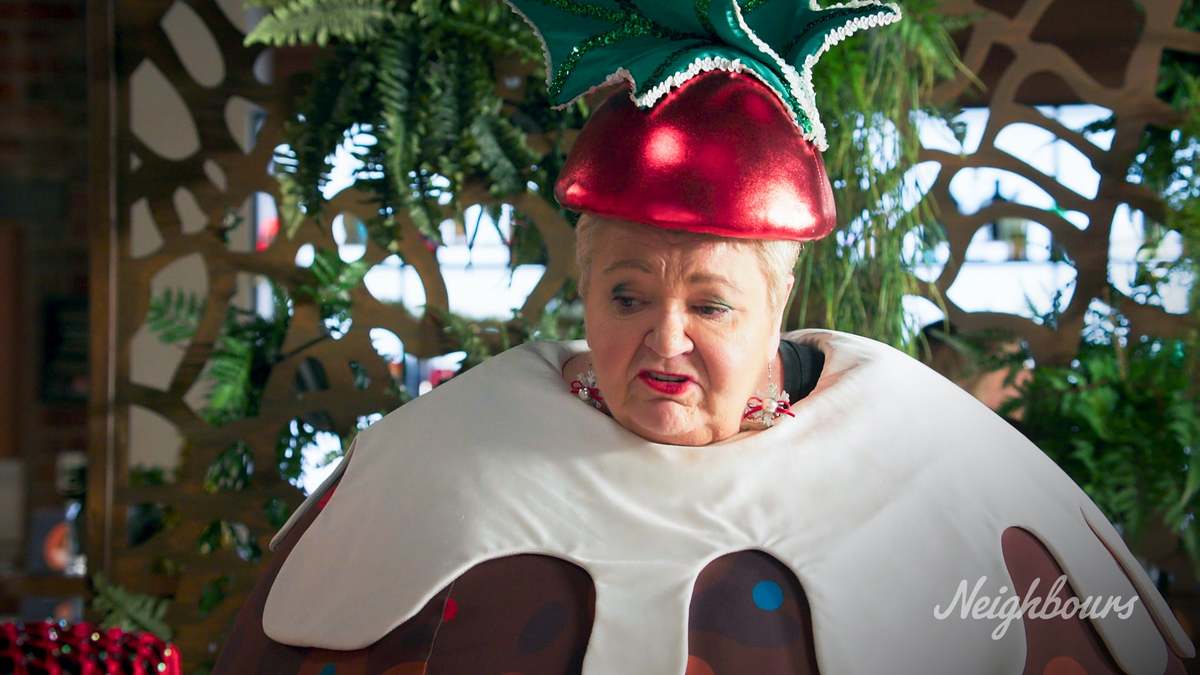 Even Vera gets into the Christmas spirit by dressing up as a bauble.

However, it’s not long before Mick rocks up – and he’s dressed in a shimmery red crab suit. Subtle! 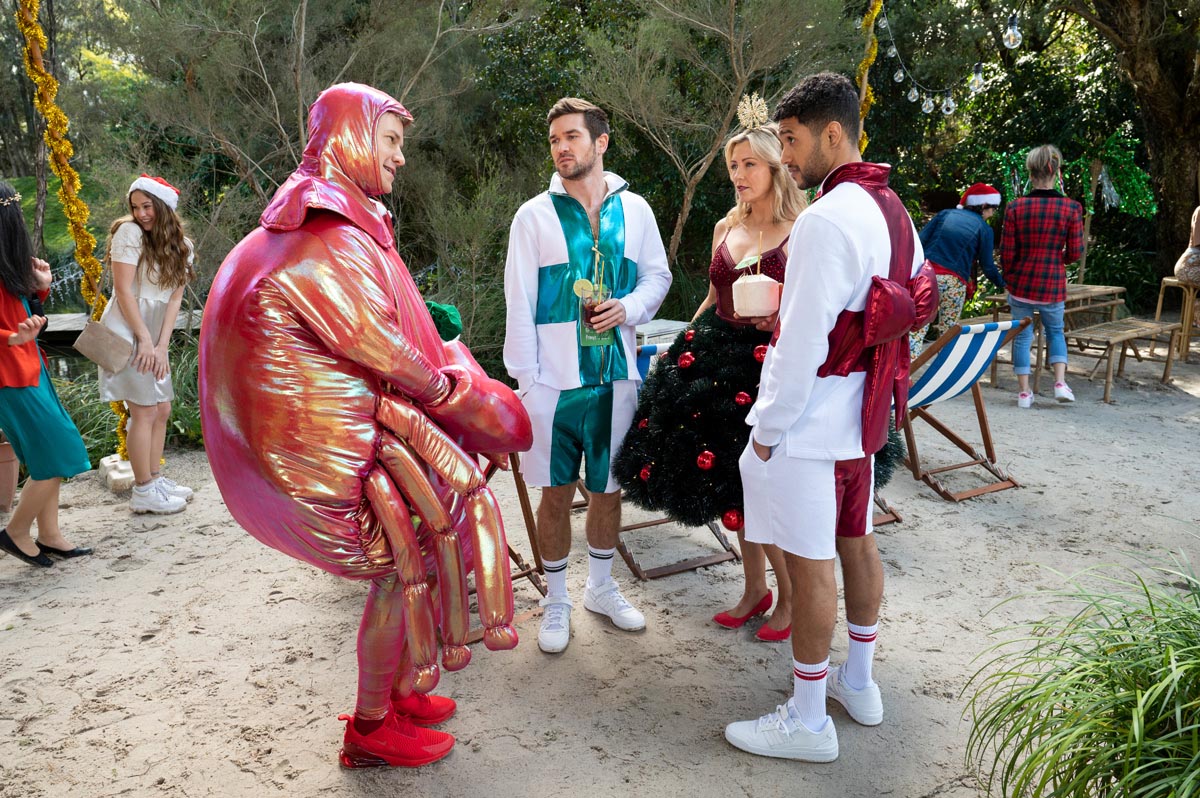 The looks on the faces of Ned, Amy and Levi are ones of disgust, embarrassment… and more than a little nervousness. Is the truth about to be exposed?

With Chloe also at the event, will Michel’s antics simply embarrass the Flamingo Bar manager and her two boyfriends, or could blackmail finally be the ammo that Chloe needs to sack the new Lassiters Front House Manager? 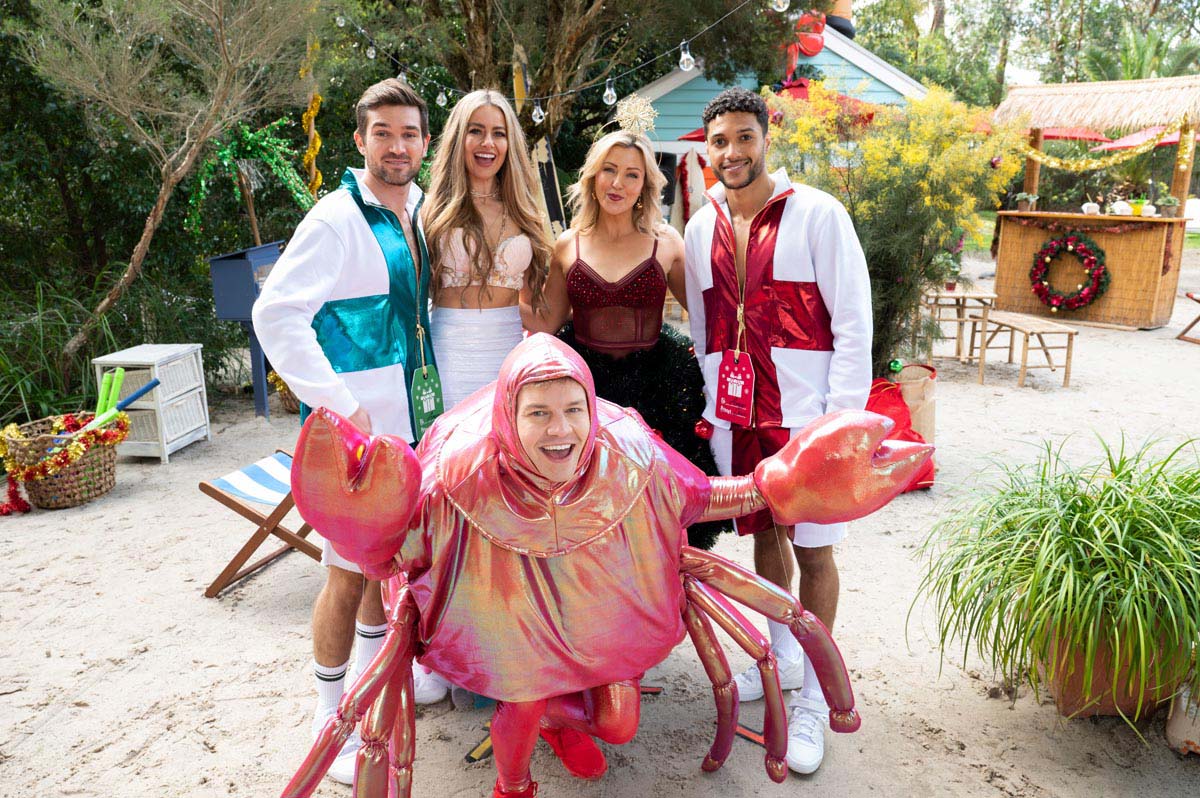 Australian viewers will see these scenes from Wednesday 24th November, while UK viewers will have to wait just a few days more, until Monday 29th November.

Don’t forget, Neighbours in the UK now airs at 1pm and 6pm on Channel 5.

From January 2022, the UK will air episodes of Neighbours before Australia for the first time!

Also, Nicolette kisses Chloe! Will they get back together? 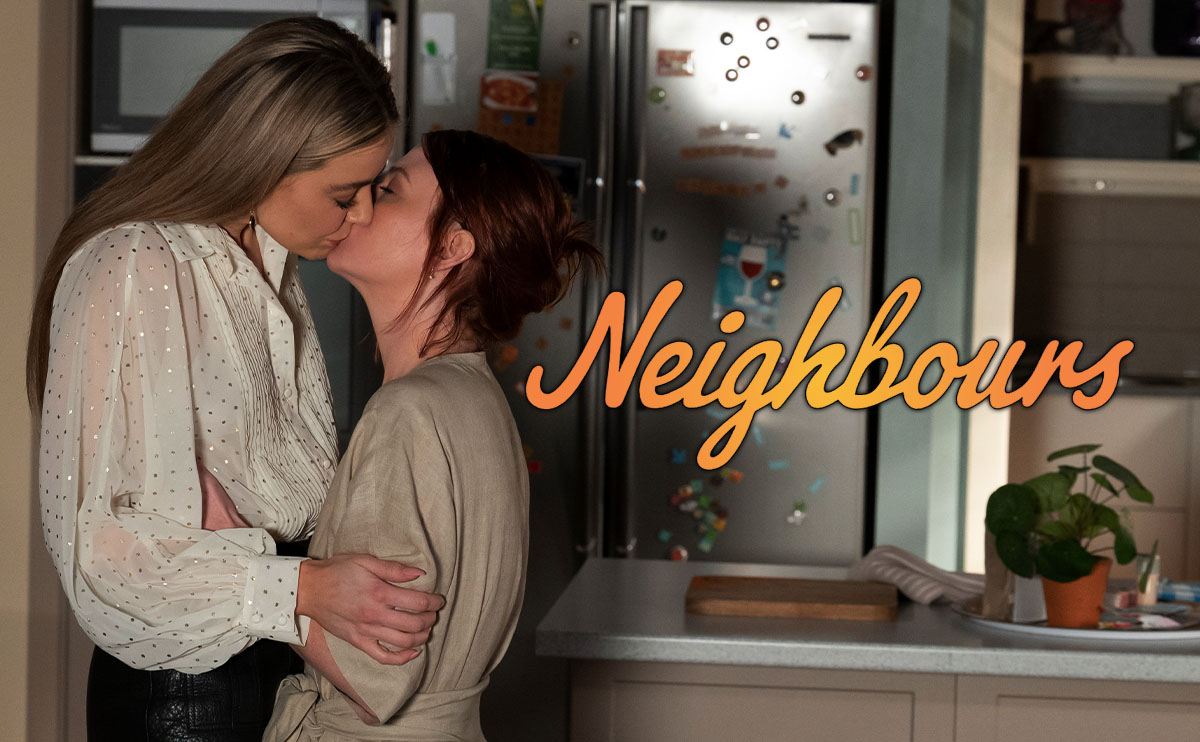 After months of separation, temptation finally gets the better of ex-fiancées Chloe and Nicolette. Meanwhile, Glen’s true motive behind his return is revealed!