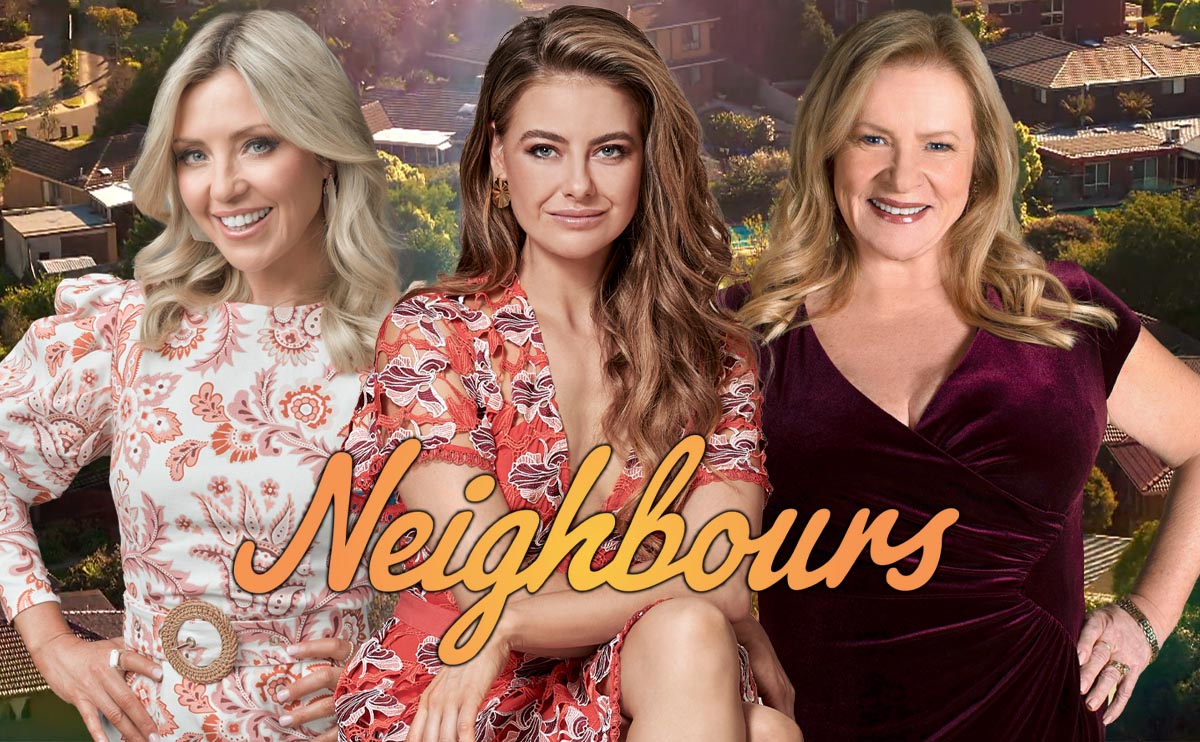 Coming up on next week’s Neighbours in the UK, Amy and Ned are caught out, Sheila comes to a decision and Chloe makes a shock confession!

These episodes will air from Monday 26th July.

After weeks of dancing around one another, Amy Greenwood (Jacinta Stapleton) and Ned Willis (Ben Hall) finally make a decision about their feelings for each other. Are they both on the same page? 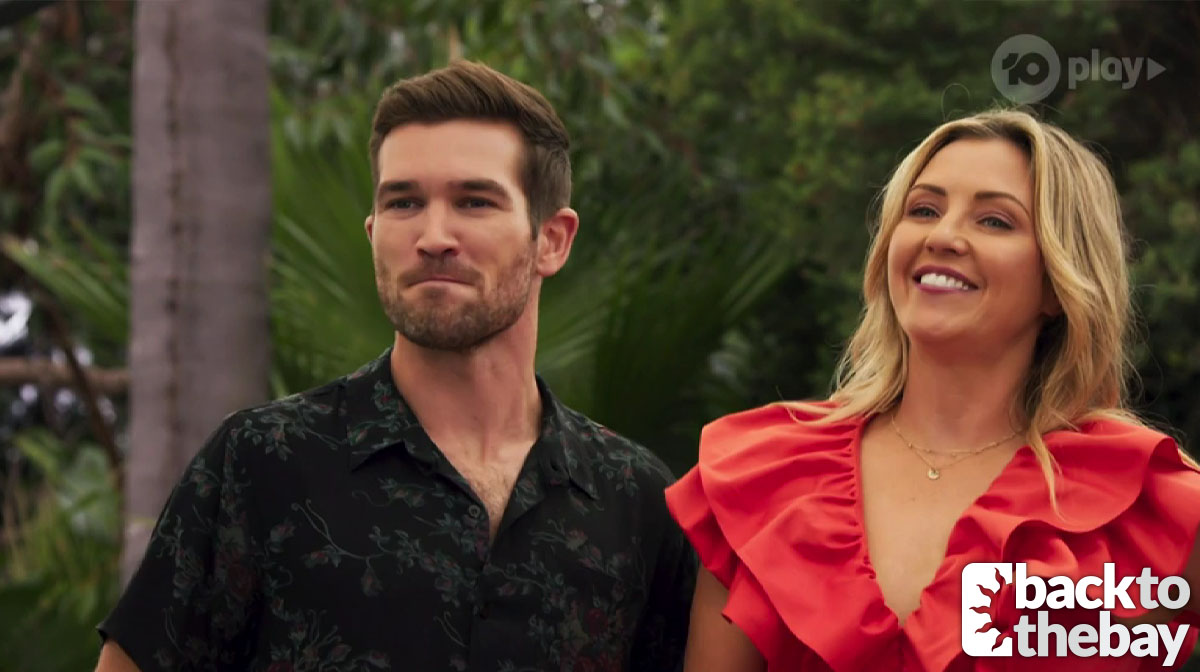 Viewers will remember that only weeks ago, Amy tried to kiss Ned after the Longest Workout Competition and he rejected her advances. It was only a matter of days after he and Yashvi had broken up, and he simply wasn’t in the right headspace.

However, he also didn’t hate the kiss, and has started to think that a fling with Amy could be a good thing. Since then, it’s been awkward between the pair as neither of them has been willing to talk about their feelings for the other.

When Amy set Ned up on a blind date with her ‘friend’, there was hope it might alleviate the tension. Amy figured that if Ned found someone else, he would be off limits. But with the date now over after Amy sabotaged it with a saucy text message, it’s clear it hasn’t helped.

This week, Ned questions Amy about the unsuccessful date, unable to see why his date ditched him halfway through. It’s not long before Amy reveals the truth – the girl who he went on a date with isn’t her friend at all. She was just a randomer. But the biggest truth is yet to come.

Amy blurts out that she has a crush on Ned! 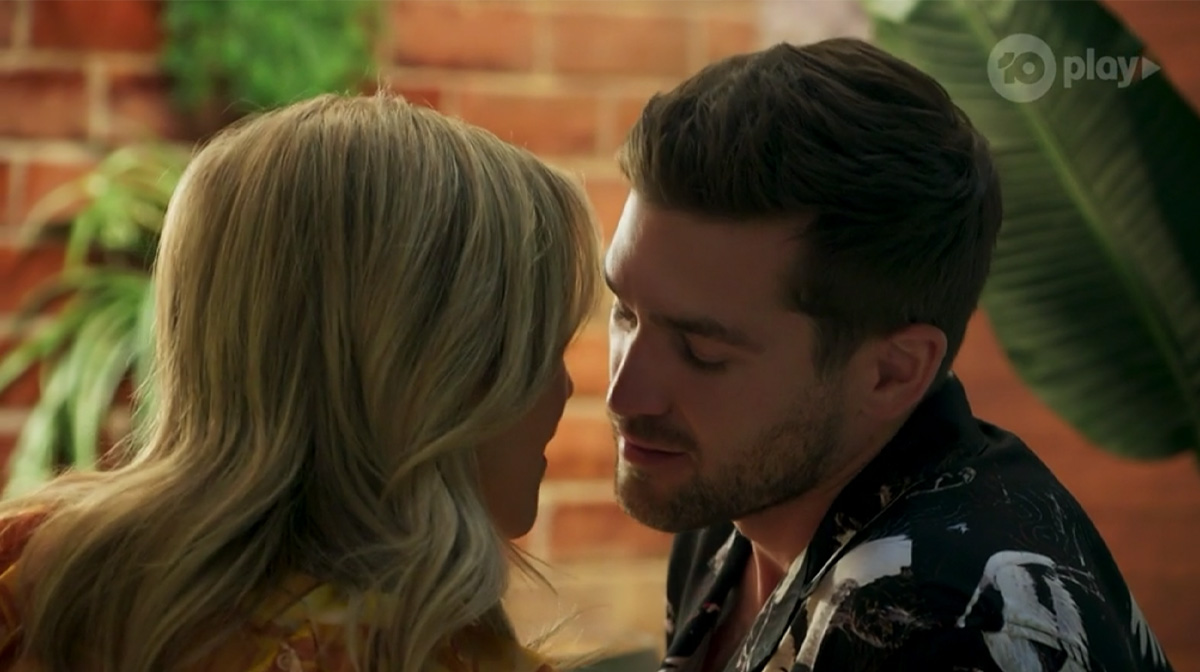 It’s a shock moment for the heartthrob artist, who has been unsure of his boss’s feelings now for weeks. He feels the same, but didn’t want to ruin things by telling her.

In the heat of the moment, he leans in for a kiss to prove the feelings are mutual. Unfortunately for them, a text from Kyle breaks the moment. No sooner does Ned read the text and learn that Yashvi (Olivia Junkeer) is in hospital than he is off to be with her, much to Amy’s chagrin.

When he arrives, he realises that Dipi (Sharon Johal) has returned to town and fears a backlash. Thankfully he can relax when he realises there’s no animosity, and she’s glad to see him therew to support her daughter. 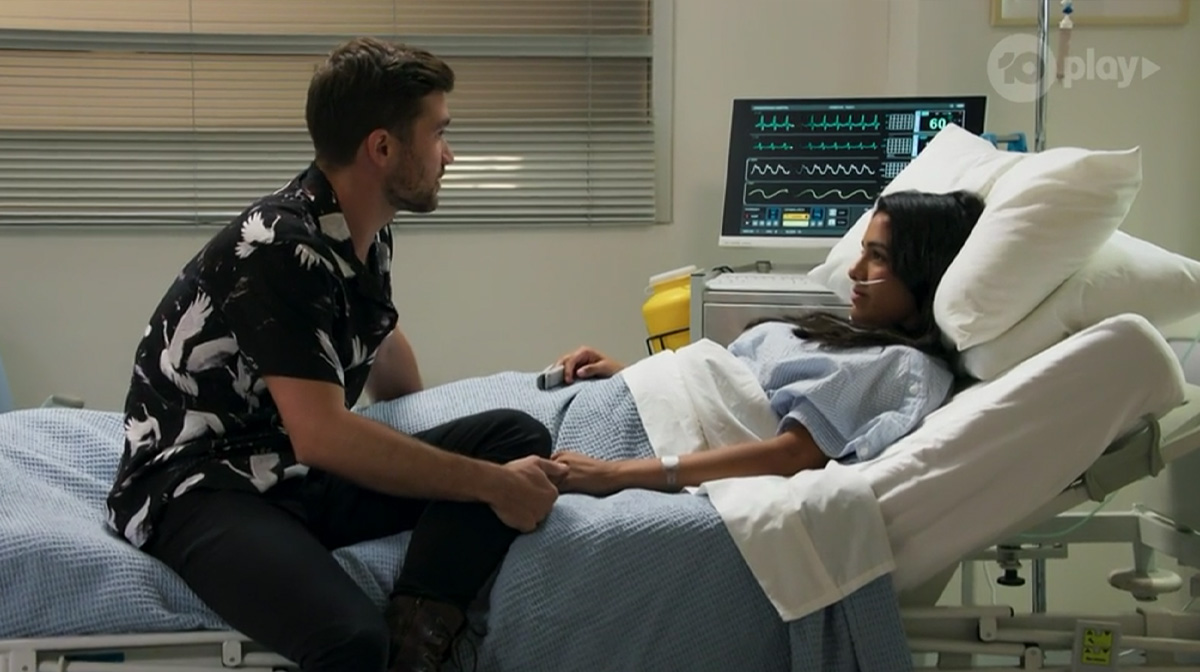 “I’m glad you’re here,” Yashvi assures Ned, who confirms it felt a natural instinct for him to visit. It’s clear that there is obviously still love between the pair.

So when Dipi notes this, she’s excited by the prospect that Ned and Yashvi could reconcile. 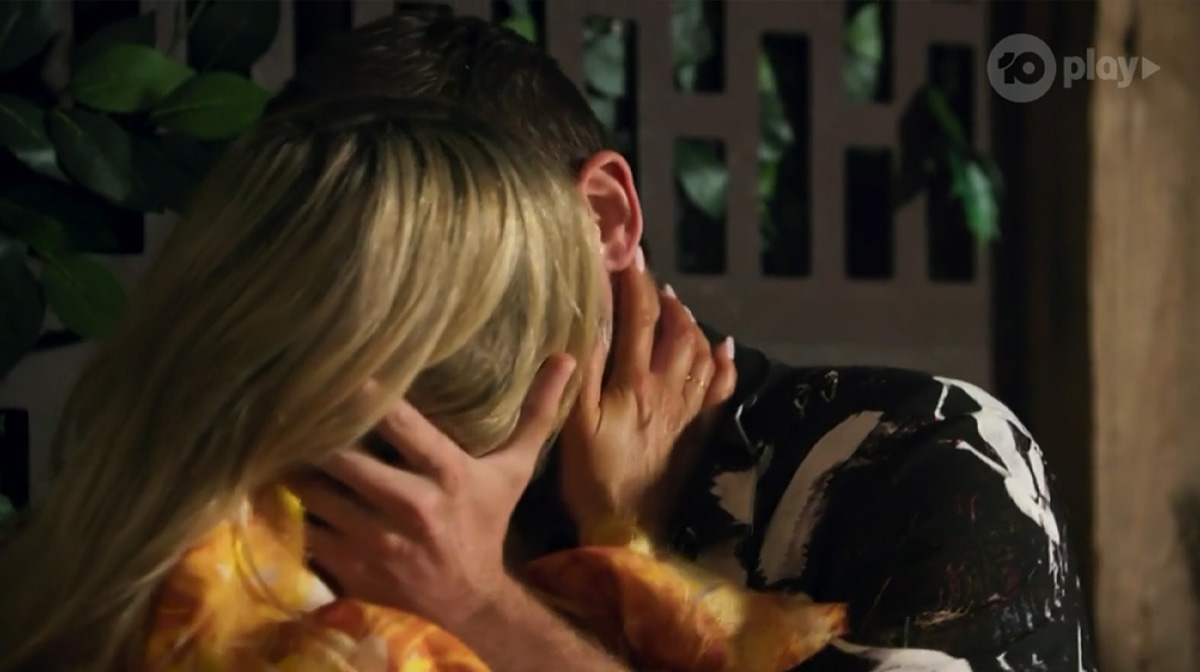 Later that night, though, Ned and Amy meet up at No. 30 and as tension builds, Ned leans in and kisses her passionately.

Unfortunately, Dipi happens to walk out to the Rebecchi sunroom at exactly the wrong moment, and catches their passionate embrace. 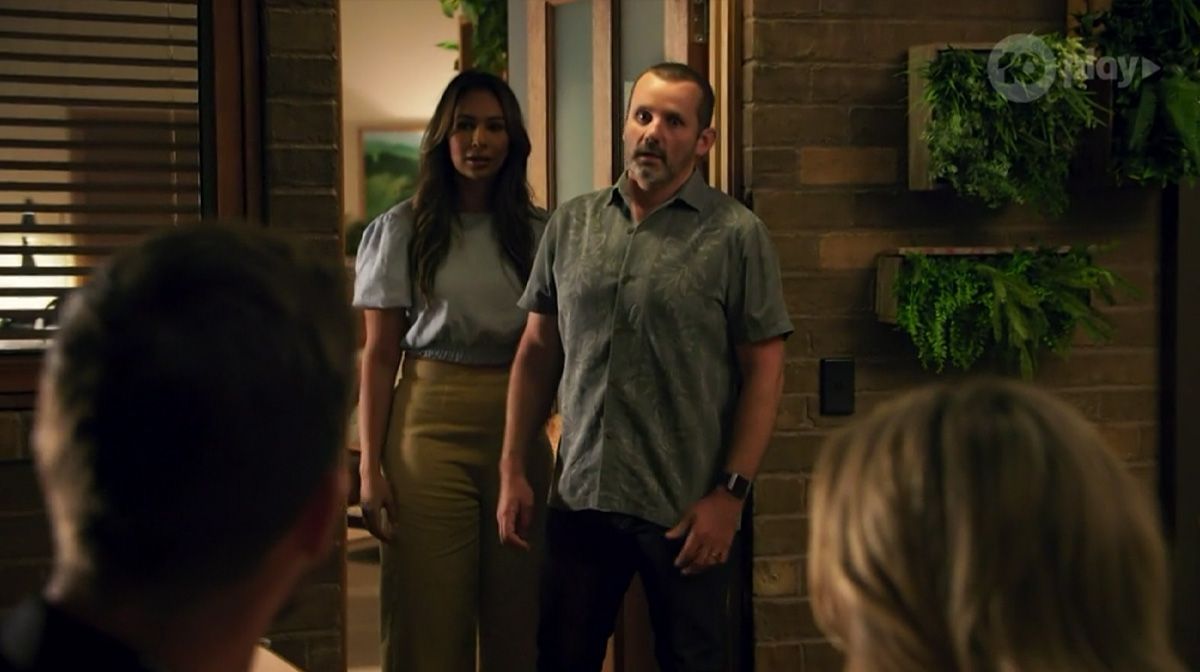 To the lioness, this means war!

Meanwhile, following the crash that put Yashvi in hospital, Sheila (Colette Mann) struggles with her guilt. Not only was she partly responsible by following Levi, but she knows it wouldn’t have happened if she had gone to the police about Mitch (Kevin Hofbauer) and Nelson (Rhys Mitchell). 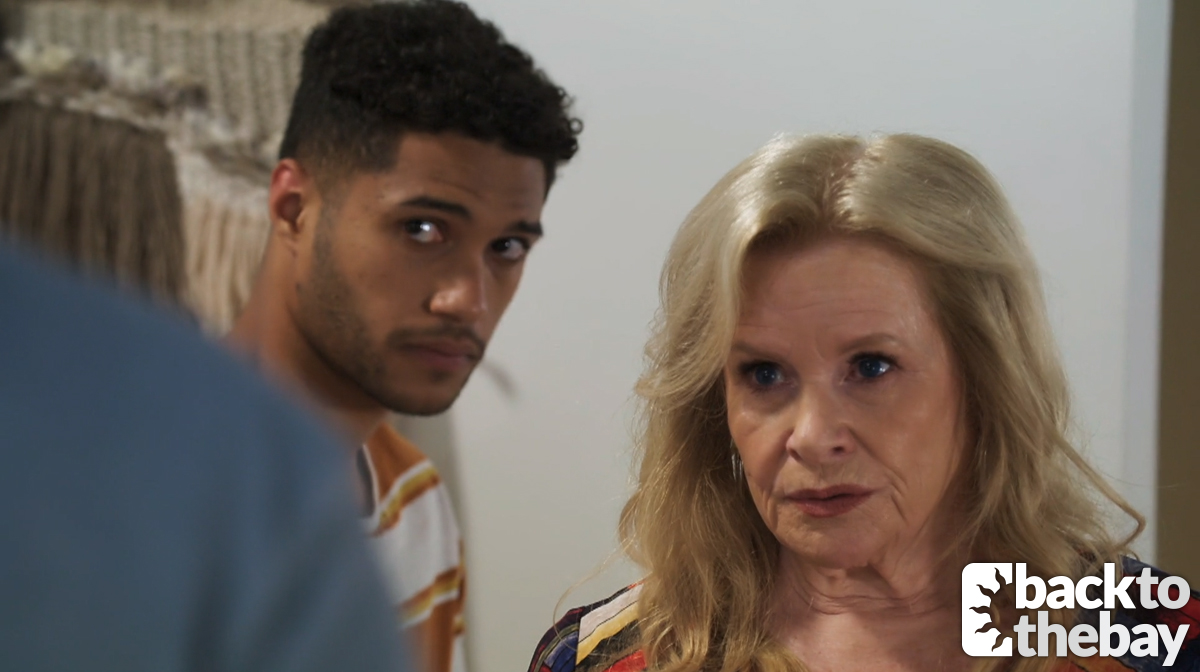 This week, Sheila makes a decision – she is going to go to the police and dob the boys in for bashing Levi (Richie Morris) all those years ago. While Levi is touched, he doesn’t know if he can let his grandmother go through with it.

However, when David (Takaya Honda) visits the struggling police officer, he’s able to talk him around.

Citing that it might help him accept the trauma as part of his history, David suggests it is a way of him figuring out how to move forward. 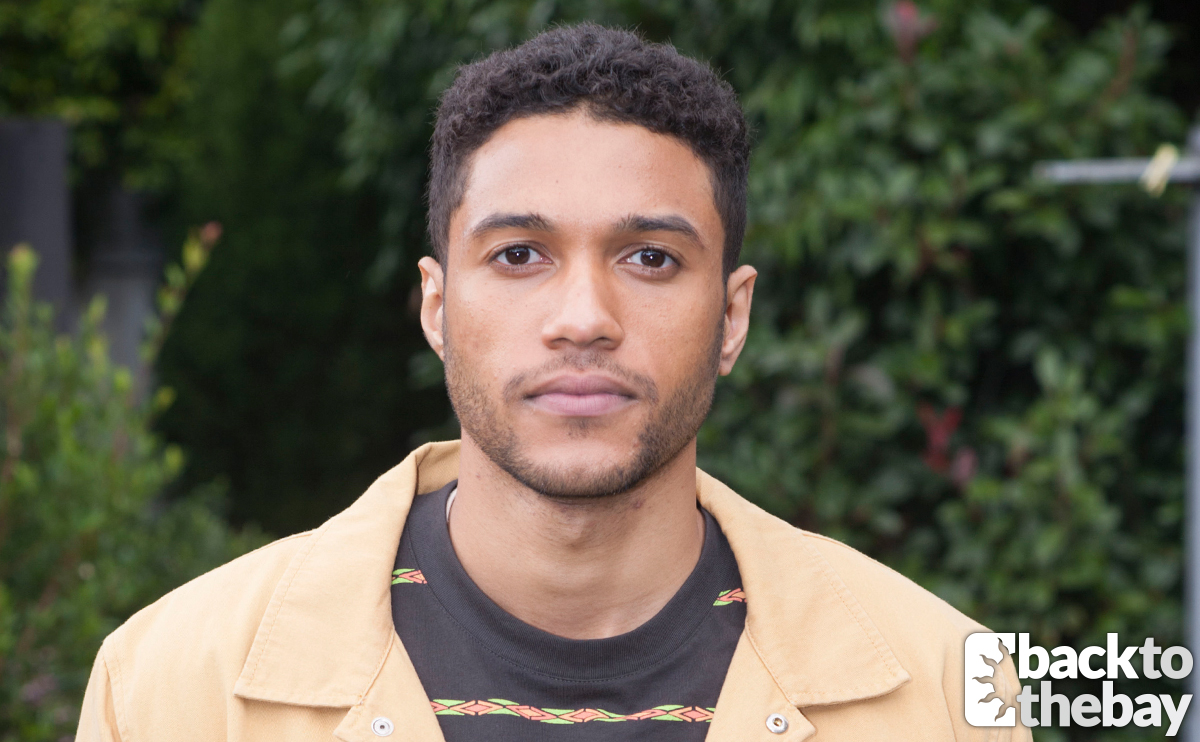 “Maybe holding these men to account is a step in that direction,” he offers.

Taking this onboard, Levi calls his grandmother and assures her that he will go to the station with her.

Elsewhere, Nicolette (Charlotte Chimes) continues to struggle with Chloe’s (April Rose Pengilly) excessive commitment to the winery, which is leaving them with less and less time together. 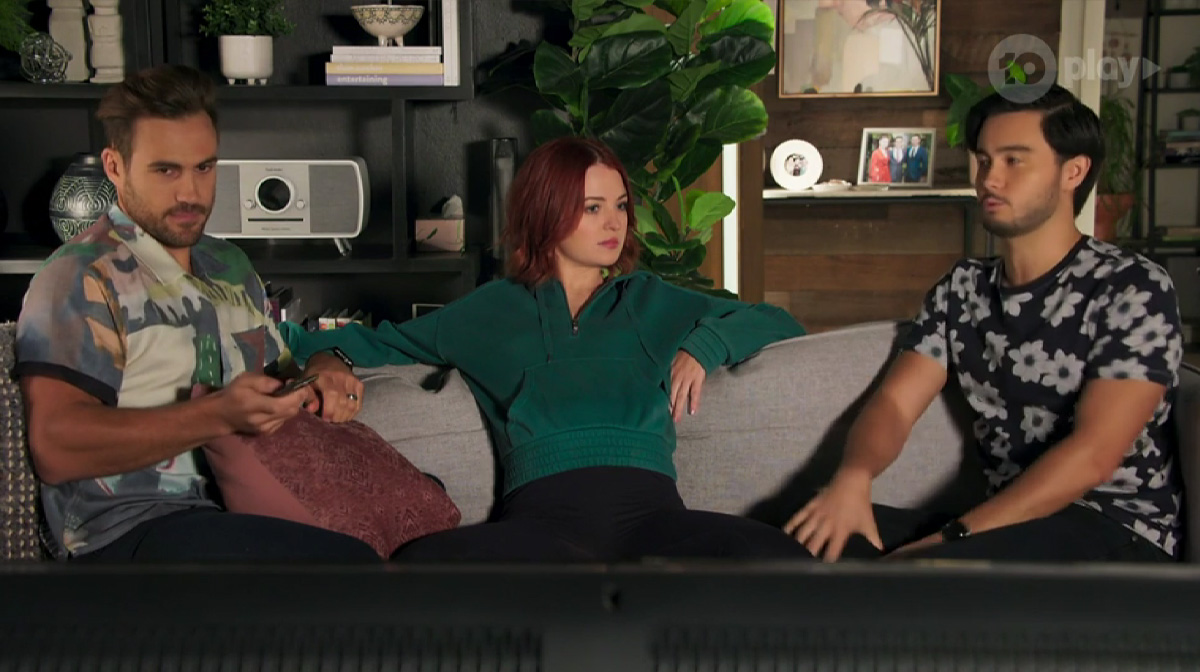 When Chloe heads into work yet again, leaving Nic with another afternoon alone with David and Aaron (Matt Wilson), the mother-to-be begins to grow annoyed. After Aaron botches a massage and David suggests they not watch a documentary about a satanic serial killer, Nic walks out, needing some space.

Meanwhile, Chloe is at the winery, discussing her true feelings with ex-boyfriend Leo (Tim Kano). 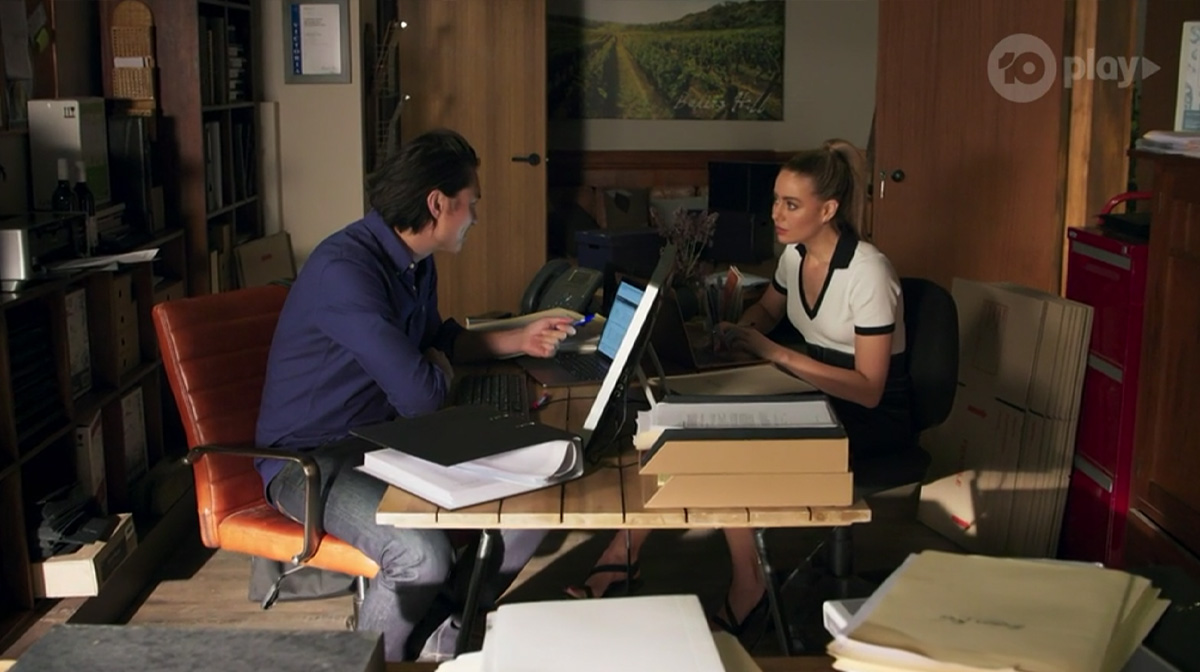 “I’ve basically been at her beck and call,” she tells her business partner, before realising how awful she sounded. In a bid to reframe her statement, Chloe states that her coming into work isn’t about escaping her girlfriend. Rather, it’s helping to refresh her before she heads home.

Despite her attempts to back peddle, the damage is done. Leo has clicked onto how much of an effect Nicolette’s clinginess is having on Chloe. 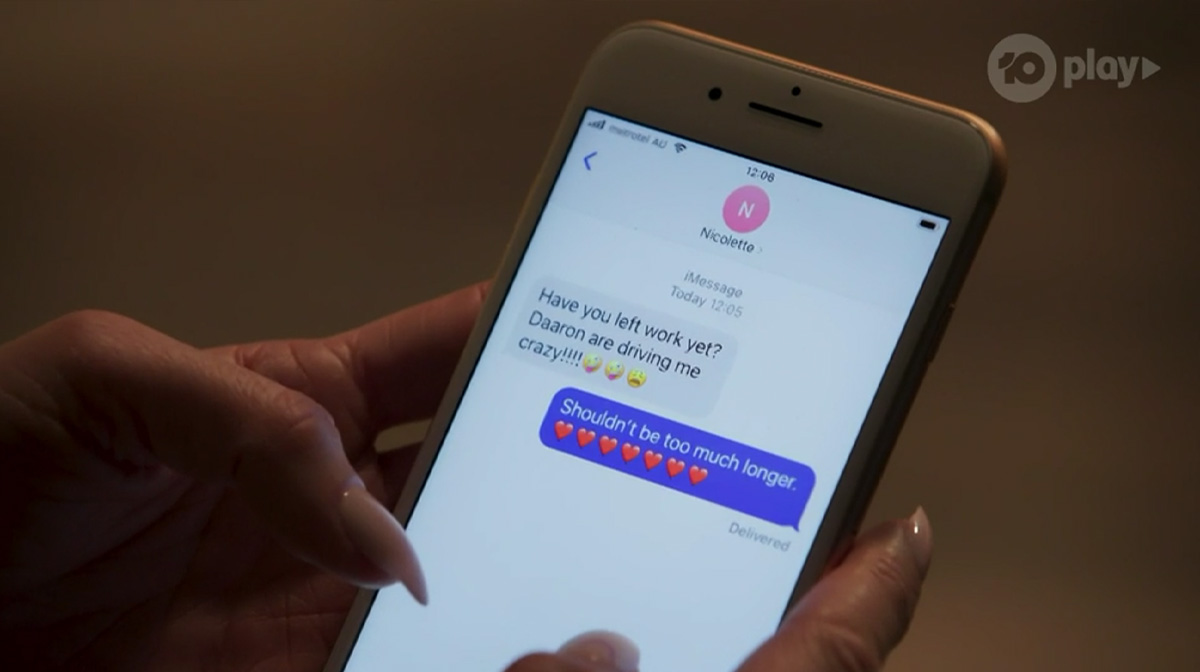 Later that day, after delaying her response to a text to Nicolette, Chloe finally gets back to her, assuring she’ll be home soon. But when an email comes through from an interior designer, Chloe jumps at the opportunity to deal with it instead of going home.

Realising what she is doing – finding any excuse to avoid spending time with her girlfriend – Leo confronts her. 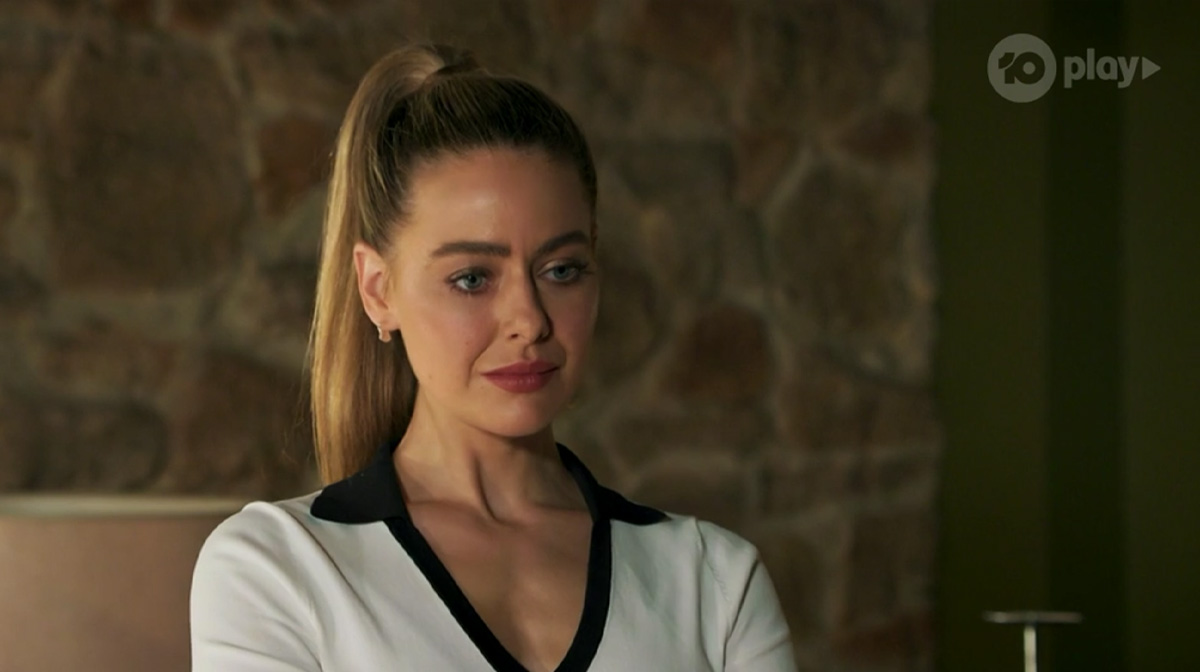 Unable to hide the truth anymore, and buckling under the pressure Leo is putting on her, Chloe admits that she isn’t sure if she wants to be in a relationship anymore.

“Is that what you want to hear?” she asks.

It’s clear Chloe has reached breaking point. Will she be honest with Nicolette?