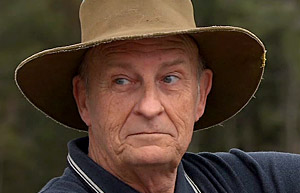 We come to know Beth’s father Graham Waters as the subject of veiled conversations within the Hunter family. He was not universally loved particularly by Robbie and even Beth was strangely ambivalent about him. He turned up in the bay for Robbie’s 18th but was aloof with the family and finally Beth confronted him over why he had never been there for her or paid any attention to her or her kids. He broke down explaining that he had been left an emotional cripple after the Vietnam war and had been too scared to love anybody.

He turned up in the bay having sold his farm and attempted to make amends with his family. He had his head turned though by Amanda Vale who set her sights on him and turned on the full force of her charm. His family were disgusted but Graham became besotted with Amanda and transferred money over to her to help her fund her dream of a movie production company and they moved in together.

They married despite a last ditch attempt by Beth at stalling the wedding, with Amanda wearing a fitting scarlet dress. His marriage further set him and Beth against each other but Graham was starting to see the light about Amanda. She was making up excuses to consummate their marriage and becoming increasingly distant.

Morag confronted him, telling him that Amanda was having an affair but Graham refused to believe it. Morag fueled his doubts though pointing out about Amanda’s repeated tiredness and how she repeatedly dumped Ryan on him. Suspicious Graham returned home to find Amanda disheveled and with a love bite on her neck. Though she made excuses Graham was suspicious and checked their joint account, finding evidence of money being regulary taken by Amanda. Reading her phone while she was in the shower Graham found a series of texts from Josh, confirming their affair.

Returning to Morag, she convinced him to help her set Amanda and Josh up and expose Project 56. Graham invited Josh for dinner as he was a friend of Amanda’s and enjoyed seeing the two of them squirm. He stole keys to Josh’s office and broke in, discovering the file for project 56 he headed home but Amanda had found another file, one containing divorce papers. Confronting him Amanda was horrified when he threw project 56 in her face and headed out to expose them. Before he could leave though he collapsed clutching his chest. Initially Amanda went to phone for an ambulance but replaced the phone and left him to die.

Rushed to hospital Graham was pronounced brain dead but after hearing a clause in the pre-nup that meant they had to be married thirty days before she could inherit Amanda refused, as his wife to consent to switching off the life support machine. Despite appeals by Beth and her family Amanda stood firm but Robbie eventually took matters into his own hands and turned off the life support. It was too late for the Hunters though and despite Morag’s best efforts, Amanda inherited everything. She held a wake for Graham but was snubbed when all his friends chose to go to Beth’s instead. Beth alter ask her for her father’s war medals and they were left on a box on Beth’s doorstep.