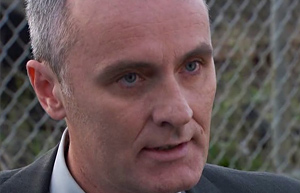 Bill Stevens was the senior police officer that Angelo reported to during his investigation of the people smuggling case. He met Angelo after he had interviewed Gibbsy, chiding him for wasting his time investigating abalone smuggling and Lou De Bono’s murder and reminding him he’d been put in place to do a specific job. When Angelo was further inconvenienced by Robert Robertson’s investigation into Grant Bledcoe’s murder, and began to tire of lying to everyone, Stevens reminded him that if he pulled out of the job he would be thrown out of the police and left facing a murder charge, saying the only way for him to get his life back was to finish the job.

Stevens met Angelo on the wharf after he and Hugo found the boat full of drowned asylum seekers, where Angelo admitted that if Hugo wasn’t responsible he had no idea where to start. The pair debated issuing a press release about the discovery, which Angelo felt might draw out Wayan, the immigrant who had disappeared some months earlier. Later, after Angelo secretly obtained a sample of Hugo’s blood, he sent it to Stevens for testing.