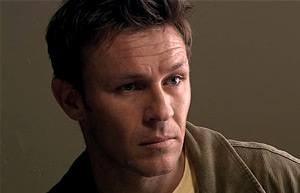 One of the constables at Yabbie Creek police station, Rice first came to prominence during the second Summer Bay Stalker incident. He brought Peter the report on the tape Eve sent to Jack and Martha’s engagement party, which a courier had been paid to pick up from a bus stop, and was among the officers who arrested Eve at the abattoir. He was later seen at Peter’s memorial service.

After the fire at the school, Rice annoyed Jack by suggesting they were dealing with another stalker, shortly before fire chief Dave Elder approached them with the kerosene cans that proved the fire was arson. He was the first to point the finger at Drew, who had come to town around the time of the fire and once burnt an effigy of his headmaster in the school playground. Despite Jack and Lara being doubtful and not wanting to investigate Peter’s son, when Drew’s watch was found by a fire at a shed, Rice applied for a warrant to search his house. While Drew was arguing with Jack, Rice emerged from his room with two kerosene cans and he was charged with arson.

He and Jack later investigated a kerosene fire at the surf club. They went to question Drew but Dan and Leah reported he had been with them all night. Betty Allsop then reported seeing Belle sneaking into the surf club. Jack and Rice arrested her and she admitted to starting the fire to clear Drew’s name. They charged her with damaging property and warned Drew that he might be in trouble for not telling them Belle was responsible when he found out. Rice was later seen arresting Robbie for turning off Graham’s life support and informing Rachel that Tara O’Neil had taken out a restraining order against her.

When he and Jack investigated a fire at the wharf, Rice insisted they talk to Drew again. However, Drew was able to reveal that he had been hiding in Amanda’s shed at the time and had seen her sunbathing naked. When an embarrassed Amanda confirmed his story, the charges against Drew were dropped. Jack and Rice were left searching for a new suspect and Jack wondered if Dave, who had also come to town around that time and had known about the fire Drew previously started, was responsible. The investigation took a bizarre twist when Constable Adams brought them a report saying that a DNA sample taken from one of the kerosene cans came from the supposedly dead Peter Baker. Things became a bit clearer when it was discovered that the sample was a hair of Peter’s collected from an earlier crime scene and signed out from the forensics lab by a man claiming to be both a police officer and Dave Elder. Jimmy from forensics was called in to do an identity parade but instead of picking out Dave he pointed to a photo on the notice board of Rice accepting a bravery award and identified him.

Jack and McGrath quickly discovered that Rice had fled both the station and his home but a chase down a bush track saw Rice cornered by multiple police cars and arrested. He agreed to make a full confession in exchange for protection. He had run up several gambling debts and hadn’t realised exactly who he owed money to until it was too late. With a combination of threats and blackmail, they instructed him to start the fires to frame Drew and then plant the hair to clear him. He was charged with arson and accepting bribes and held in custody. Although he was too scared to reveal who his employer was (later revealed to be Dennis Gillen, a big league criminal with a grudge against Peter), he did warn Jack that Drew was still in danger.