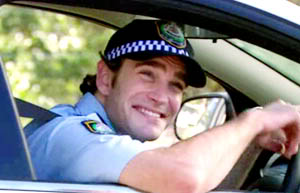 After Aden and Nicole stole Poppy’s car from the Sands Resort, they were spotted at the beach by Constable Peak. He asked to see Aden’s licence and subsequently arrested Aden and Nicole for the theft of the car. Despite Nicole trying to win the Officer around with a sob story, they were locked up for a number of hours at the police station. Later, Constanble Peak took them some food and told them that they would be there for a while longer as the Magistrate was delayed.