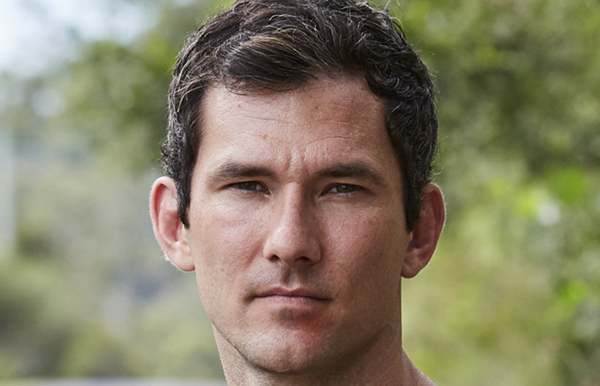 Patrick was first referenced as Luke when his brother Ash arrived in Summer Bay. Originally it was understood that Luke has been killed in an overseas war on 25th February 2007 and was buried in Summer Bay. His gravestone was seen in Episode 6181 when Ash found Billie placing flowers on it for ANZAC Day.

In 2017, the backstory was changed and it was explained that Luke had got drunk on the night of 24th June 2013 and fell off a bridge after an incident of alcohol-induced violence. He was registered as a missing person three days later, but his body was never found. He was often referenced between the pair, and in his memory, Billie named her daughter after him.

He first appeared onscreen at Billie’s funeral when Kat saw him watching the service on the beach from afar. After Ash finished singing his song for Billie and he and VJ went to scatter Billie’s ashes, Patrick walked away. When Ash learnt he had to prove Luke’s death to be able to access Billie’s estate, Kat rang the NSW Births, Deaths and Marriages to organise his death certificate, however she was later informed that there was no death certificate, and that Luke was still alive to the government.

Ash began getting silent phone calls, and when Kat suggested he ring the number back, it went straight to voicemail. Ash pointed out that although the phone belonged to a ‘Patrick Stanwood’, it sounded exactly like his brother Luke. Kat had the number traced and Ash and Kat went to the house. However, they found it empty. As they left, Ash was greeted by Patrick, who called him ‘Marty’. Ash punched him and walked away. Later, Patrick turned up at Ash’s van and explained that after his last tour, he was depressed due to the things he’d seen and done and decided to make a fresh start under the alias of Patrick Stanwood. Kat questioned him for faking his death, but informed Ash that it wasn’t likely that charges would be laid.

A couple of days later, Kat approached Patrick and asked him what he was doing in town. He told her that he was hoping to see Ash. Kat forced Patrick and Ash to have lunch, where Patrick informed Ash that he had been up north, working as a jackaroo the last couple of years. He admitted he made a mistake and that he was still Ash’s brother and would be there for him. Patrick told Ash that his lease on his place was up and that he’d be leaving town, hoping to become a jackaroo again. Ash inviteed him to stay at the farmhouse without talking it over with Kat. She agreed to it, on the basis that it was temporary. Ash began telling Kat stories about when he and Patrick were younger and Patrick grew antsy, telling Ash to stop and that he wasn’t the same person that he used to be.

The next morning, Ash tried to awaken Patrick, and in the process, Patrick put him into a choke-hold. Kat broke it up but told Ash that she wasn’t comfortable with him being in the house. Ash took him out for a few beers and they talked things over. Ash told Kat that Patrick was staying with them and that it wasn’t up for debate. That night, Kat found Patrick sleep walking and when he walked towards her, she said Luke and he woke up. Kat asked whether he’d talked to a psychologist, and Patrick admitted he had, but to no avail. She delivered him an ultimatum: either he told Ash about the sleepwalking, or she would. The next day, Kat confronted Patrick, having learnt that he told Ash there’s nothing wrong. She told him that PTSD doesn’t just go away, but he urged her to leave it alone, saying that if she wanted him to leave, he’ll go.

Later, Patrick walked in on Kat reading his army file, and confronted her about it, telling her to back off. She asked about Operation Bottleneck which stopped him in his tracks. She showed him the file, pointing out that the whole thing has been protected. He stated that it was procedure as it was confidential. Kat sympathised, saying that she knew it was bad, but he assured her she had no idea. Patrick packed his bags and left the Farm House, telling Kat that he was going to the Caravan Park. Before going, he begged her to forget what she knew about Operation Bottleneck and to not broach the subject again, because he can’t go back there.

When Ash threatened to go for custody of Luc, Patrick was the voice of reason, making sure that his brother was doing what he was doing for the right reasons. After Luc was rushed to hospital and Ash saw VJ punch Zac, Patrick tried to calm Ash down, but he decided to sue for custody. Knowing that they needed stability, Ash and Kat decided to move into the Pier Apartment together, and invited Patrick to take the other room. A week later, they all moved in, with Luc’s arrival imminent. When Luc arrived, Patrick immediately began to feel uncomfortable and agitated.

After a few weeks of living together, Patrick was forced into babysitting Luc, which he reluctantly agreed to do. When she started crying, Patrick had a PTSD episode, and heard war noises. Luckily, Kat was downstairs at the Diner, and quickly rushed up to take control of the situation. She berated Patrick for not doing anything. That night, Kat told Ash what happened, stating that she thought it was all linked to his time in Afghanistan. In the Diner, Ash confronted Patrick, but he promised that it would never happen again. However, that night, he had another episode and woke Ash on the couch, trying to rip Luc from his arms. The shouting also woke Kat, who rushed out and restrained Patrick, who finally woke up. After Kat took Luc to Irene’s, Ash tried to get Patrick to open up. Patrick responded by punching him in the face and storming off.

The next day, Ash found Patrick and urged him to open up about what happened in Afghanistan for the sake of his mental health. Patrick wouldn’t have a bar of it and rushed off in a huff. After being asked by Phoebe whether he’d seen Ava, he got into his car and began hearing war noises again. He turned up the radio to drown out the sound and reversed, accidentally hitting Ava, knocking her unconscious. Patrick was horrified by what he’d done, and at the Police Station, he told Kat that he saw her lying there in the dirt, and Kat realised that his past was starting to catch up with him.

Later, Patrick opened up to Ash and revealed that when he was in Afghanistan, he was stationed in a village near an orphanage, and he could hear the babies crying all day, every day (which Luc’s crying triggered). One day, an Australian soldier was taken and Patrick’s platoon was moved, but came under fire. Patrick saw a figure coming from nowhere, and worried it was a sniper, he fired a fatal shot. Upon inspection, he realised that he’d killed a young girl (who looked like Ava). That night, Patrick thanked Kat for her support, but had another episode. Because of this, he left a note for Ash, packed a bag and left the apartment.

After finding Patrick’s note, Ash and Kat tracked him down to Bradley’s Point. A suicidal Patrick told his brother to go home to his family and leave him alone. Ash tried to talk him down, but Patrick said he was the one who should have died and made his way to the edge of the cliff. Ash tackled him to the ground, punching sense into him. Ash told his brother that he was the one who got him through his childhood and now he’s all he’s got left. Patrick agreed to get help, but Ash said there was one thing he had to do before he left. Back with Kat, Ash gave Luc to Patrick to hold to make up for everything he had done.

While Patrick packed the rest of his belongings, Kat assured him that the rehabilitation facility he was going to was highly recommended. As they headed to the car, Patrick planted a seed of doubt in Kat’s mind about being a mother to Luc, before thanking her for reconciling him and Ash. Patrick and Ash then drove to the city to get him settled in rehab.

Months later, Ash visited Patrick him in rehab, before he jetted off to Cyprus to be with VJ and Luc.