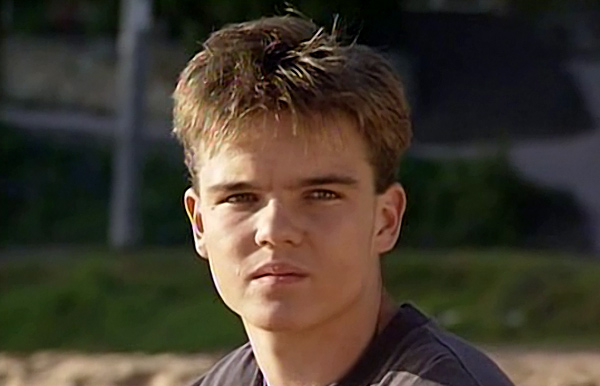 When Peter O’Neale first appeared in Summer Bay, he was in Year 10 at the High. He came over from Mangrove River High when it closed and proceeded to terrorise the locals, particularly Damien.

At the age of 15, he was a genuine toughie, hardened and streetwise. He handled himself well in a fight and wasn’t scared to go looking for one. Never an achiever in the classroom, he made sure he was top dog in the playgroond.

Tug’s character has developed in Summer Bay – with his father in prison, he was befriended by Bobby who sympathised with his situation as she went through it before.

He then met the girl of his dreams, Sarah, and had to change his ways in order to go out with her. Unfortunately, his possessiveness drove her away and now his ally Bobby is dead, his prospects are looking bleak. He fails at school and quits dramatically. He tries his hand at job after job but for one reason or another, they never seem to work out.

Both Tug and Shane were continuous enemies – they always tried to better themselves and were always getting into squabbles. Tug got Shane into prison when he set him up by placing stolen goods in a house Shane was helping out.

Tug’s father returned to the Bay in 1993. He initially ignored him, but after many persuasions, he gave him a chance and they set up a farm together.

One night, there was a party in the Surf Club. Tug’s father arrived there drunk, but what annoyed him more was the way he handled Sarah. Tug could not forgive him and his father left the Bay. Problems came for Tug.

In 1994, Roxy and Luke tried to work out why Tug always did badly at school: they discovered he had dyslexia. Tug had a remedial teacher to help him, but it went the wrong way when he fell in love with her and tried to hold on to her.