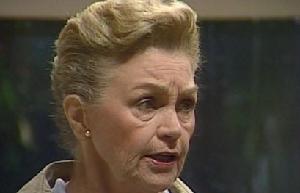 When Danny King tried to commit suicide, unable to cope following his paralysis in Vietnam, Coral and her husband Bert came to visit him in hospital. Coral blamed and confided in Pippa that she felt she should have done more to help him.

She returned to the bay two years later to support Pippa while Tom was in hospital with a stroke. At the Fletcher house she welcomed Sally to the family and comforted her that Tom was simply having a long sleep. She scolded Carly for publicly humiliating Steven and showered Sally with gifts to take her mind off Tom’s absence. She bought Steven an expensive calculator, despite Pippa worrying that she couldn’t afford it. Coral told Pippa that she was working nights as a cleaner for extra money but hadn’t told Social Security about it but Pippa was already feeling too guilty about the amount of money she was spending on fuel to visit Tom, to reprimand her mother too much.

She bought Steven more expensive tools but when the same ones disappeared from Alf’s store, Steven confided to Coral that he thought she was stealing them. He later returned the tools anonymously. Pippa bemoaned the lack of an electric knife and within the hour Coral arrived with one but Steven knew she had stolen it and snuck out to replace it. Pippa later got a call from the police saying that Steven had been arrested for shoplifting. Carly forced Coral to admit the truth and she finally came clean saying she had been shoplifting for ten years so she could keep up the lifestyle she had when Bert was working, before he took a pension.

In court she was let off with a good behaviour bond and insisted on returning home, despite Pippa protesting she stay. She insisted she need to tell Bert the truth and gave Celia money to replace what she stole before departing.