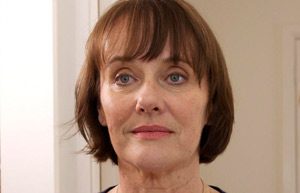 Christine first appeared in the Bay after hearing that a banned book had been distributed by Summer Bay High to her daughter, Melody. With her strict religious morals she was disgusted by the play, Spring Awakening, as it had themes of pre-marital intercourse, drugs, suicide and other taboo issues. She was unaware of this until Leah inadvertently handed the book back to her after Melody had left it in the Den. She was there wagging school, a fact Christine put out to Leah pointedly.

She introduced herself to Miles, informing him she would be calling an extraordinary P&C meeting to combat the issue, not before burning the book in front of Miles and a hallway full of students the following morning. A few days later, whilst on her way to meet with Mr. Bartlett about Miles, she spotted two guys harrasing Nicole Harris, before being arrested by Jack. She started to take pictures of the incident on her phone, complaining about their lack of behaviour as a problem she would bring up at the P&C meeting.

She then walked in on a class where Nicole was fighting with a student so she taped the incident on her phone as well, before telling Miles he should say goodbye to his career. She insisted on taking a reluctant Melody to the meeting but they were late arriving and when pulled up about Merlody’s presence she announced that Melody was part of her presentation. She began by showing a slideshow of the pictures she took but was promptly shut down by Morag who told her her actions were illegal. She then paraded Melody around the room, saying how she had changed and was misbehaving.

Irene defended the children and was called a bad parent and almost lost it until Leah stepped in. Morag interjected by throwing the book back at Christine and the matter was put to a vote. Christine was alone in wanting rid of Miles and vented her rage at him, pointing out his homelessness as a factor of his bad teaching, calling him a “tramp” and to “go back to the streets where you belong”. Melody eventually snapped at her mother and ran out.

After Melody aled to return home, Christine went looking for her at the Den and then headed to Geoff’s and forced Mel to return home, not before blaming her for the events at the P&C meeting. The next day, Christine discovers Melody on the phone to Geoff an took the phone from her and informed Geoff that she is being enrolled in the local catholic school in Yabbie Creek, threatening him to stay away.

Later in the evening, Christine called Melody for dinner, only to discover she had snuck out. Having tried irenes and the Den she headed to Jack & Martha’s engagement party and interrupted during the speeches to announce she was taking out a restraining order on Geoff.

A drunk Jazz told Christine that locking up Melody will not stop her from having sex, and that Christine needs some too! A furious Christine insulted Jazz’s parenting skills, causing Jazz to slap her and be physically restrained by Tony as Christine cried assault.

The next day Geoff was horrified to realise that Christine had taken out the restraining order against him and she had him arrested on finding out that he had been at Nicole’s party with her. After Melody was attacked by Axel though Christine refused to listen until Melody defied her and went to the police. The Jones’s weren’t seen again until Melody turned up in the mental hospital where Aden was.

Running away from the hospital, Melody lied that her mother was after her, only for Geoff and Nicole to find out that Christine was in New Zealand. Christine returned to the bay and used Annie to get a message to Melody only for Melody to wrip up the bible. Her actions were all Christine needed to have her discharged and the next week Melody was re-enrolled in SBH. It quickly became clear though that Melody wasn’t well, despite Christine’s protests that she was fine.

When Geoff found out that Melody had been starving herself, he encouraged her to tell Christine but Christine refused to believe she was sick and needed help. Instead she terrified Melody by attempting to perform an exorcism on her. Luckily Geoff was able to get Miles who stopped it in time and took Melody away. Melody later announced she was divorcing her parents and Christine was forced to back off or lose her daughter altogether.

She reappeared a few months later, seemingly a changed character but Melody was unconvinced. Melody was shocked to be introduced to her grandmother and tried to build a relationship with the old woman, despite Christine’s doubts. At dinner Melody’s grandmother revealed her true colours to her grand-daughter causing Melody to see her own mother in a different light. Christine later told Melody that her grandmother was in hospital and she died soon after. With mother and daughter rebuilding their relationship and Christine heading to New Zealand to start a new life, Melody decided to go with her and give Christine a second chance.