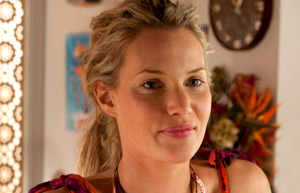 Angelo ran into a blonde woman who introduced herself as Shandi Ayres while returning to Summer Bay from the city; her combi van had broken down and as they were going to the same place he offered her a lift. Despite knowing he had a girlfriend, she made it clear that she was willing to sleep with him but he turned her down. She met Leah and Charlie on arriving in town, but with Angelo having made it clear he was with Charlie, she quickly turned her attention to Miles, who she found on the beach reading a self help book.

Shandi and Miles spent the day together and shared a number of kisses, before she revealed she was the daughter of John Palmer. She explained John didn’t know about her, having not seen her mother since before she was born. The next day, she approached John and Gina and told them who she was, producing a photograph of John with her mother and showing him her driving license which showed she was born within nine months of John leaving for Vietnam. She told John she just wanted to get to know him.

Although she let Miles give her a tour of the town and accompanied him to a restaurant, she made it clear she didn’t do traditional relationships. She and Miles joined John and Gina for a meal at Angelo’s but with Gina having just turned down John’s proposal the atmosphere was tense. Despite continuing to flirt with Miles, she switched her attention to Will when she found him and Lily playing on the beach, reminding Miles they were just casual. That evening, she was at Angelo’s with Will and witnessed an altercation between Alf and Penn Graham. It was that night that Penn disappeared.

Will and Shandi went away for a while, upsetting Irene, who was even more angry when Shandi stayed over with Will at the beach house, feeling Lily could get confused. John wasn’t impressed with the speed she had moved from Miles to Will either and queried why she was still in town when she hadn’t shown much interest in getting to know him. She responded by asking for money, then paid up her rent at the caravan park and refused to tell Miles and Alf where she was going. She left town after telling Will to think of Lily and not do anything stupid.

When the murder case against Alf, who had been accused of killing Penn, began to break down, the police went looking for Shandi. However, when Shandi Palmer was tracked down, she was a different woman to the one who had been in Summer Bay the previous year. This Shandi quickly identified “Shandi Ayres” as Daria Hennessy, a childhood friend of hers turned con artist, who knew enough about her past to be able to pose as her with someone who’d never met her.

Charlie then went to Angelo, who had found the receipt from the tow truck when he first met Daria, and together they checked out the address she’d given: A caravan park up the coast. Angelo tricked Daria into meeting him by pretending to be Will and when Daria tried to run, Charlie arrested her for fraud. She was taken back to Summer Bay where Charlie and Detective Robertson questioned her about conning money out of John and the combi van, which she had stolen from a previous boyfriend. When an outfit of hers was identified as matching sequins found in Penn’s hotel room, Daria was interviewed about his death. She said she had slept with Penn but denied knowledge of his death. However, she gave herself away when she mentioned the fact Penn had been killed with a fishing knife, something that was not common knowledge, and refused to speak again without a lawyer present.

When Will was also arrested, the truth came out in interviews with the pair: After witnessing the altercation, Daria, feeling she was getting nowhere in trying to con John, went to see Penn and offered to help him con Alf. However, Penn was becoming increasingly unstable and, after ringing Alf and asking him to meet him, pulled out a knife revealed he intended to kill Alf and claim self-defence and wanted Daria to back up his story, pushing her roughly onto the bed. Will arrived and tried to take Daria away but Penn attacked him with the knife and Will ended up stabbing him in self-defence. After hiding from Alf when he came to the room, Will and Daria dumped Penn’s body out at sea (both of them claimed it was the other’s idea). Robertson noted Daria would probably be charged as an accessory.