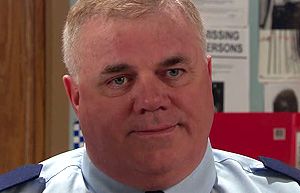 There is some confusion to Ken Harper’s actual role at the station. Credited from the beginning as senior Constable, sometimes Harper appeared to be in charge and leading investigations. At other times he was merely another Police officer answering to the likes of McGrath and Charlie.

Harper is an old time cop who had been at Yabbie Creek for his whole career. Polite and respectful, he seems to get along with most people and was at the heart of many major incidents including the revelation of Jack’s murderer. He paid his respects to Tony after Jack’s death.