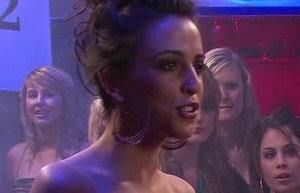 Izzy went to the meeting organised by Donald Fisher for the Seniors to discuss the Year 12 Formal where she was enthusiastic about Cassie’s plan to hold the event at The Sands Resort. She then suggested they try and get a band to appear at the event. When asked by Cassie, who she thought was going to win, she remarked that there was no contest. Surprisingly Aden won the vote and Izzy was eating lunch with Cassie when Matilda revealed the scam that Aden had been trying to pull.

Bizarrely, when she returned a few months later at the formal, she was disappointed that she had been dumped by Aden, who she had been so opposed to before, so that he could get together with Tam and acted bitchily towards Cassie. She got her comeuppance however when whilst the lights were out, a drunk Sean stumbled and knocked Izzie over the food table, ruining her dress