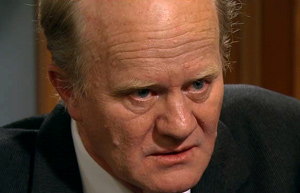 Len Green was the mayor of Summer Bay. Amanda Vale approached him at the council offices, claiming her name was Amy and she wanted to interview him for a dissertation about local government. Len was more than happy to spend time with her and didn’t need much encouragement to accompany her to a secluded spot for an assignation. They were photographed together by Josh West, who had forced Amanda into helping him. Josh then showed Green the photographs and threatened to make them public if Green didn’t resign as mayor. Green quickly bowed to his demands.