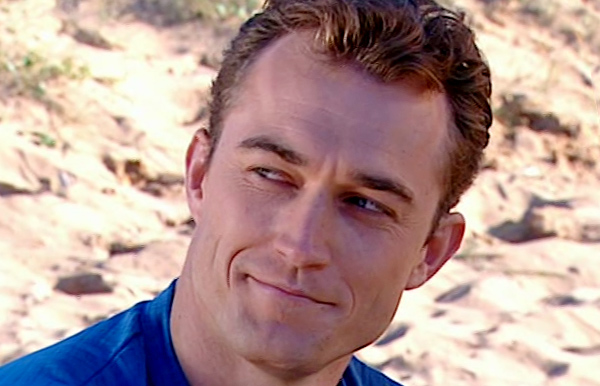 Gavin was first seen on the beach, helping lifeguard Shauna get rid of a drunken lout. The two got talking and Shauna was disappointed to discover he had a wife and daughter. Alf recalled Gavin’s girlfriend Alicia became pregnant soon after leaving school, which some suspected was deliberate. Gavin had married her and she had forced him to settle down and give up many of his hobbies. When Shauna questioned Gavin about his behaviour towards her, he accepted it was a cliché to say his wife didn’t understand him but said she didn’t. However, when Leah confronted him about pursuing Shauna, he panicked, worried Alicia would keep him away from Trisha if she found out.

Gavin convinced Shauna to come to a band with him on the grounds he was reviewing it for a local paper, but despite saying it was just platonic, he kissed her and said he didn’t want to spend the rest of his life paying for a mistake he made when he was nineteen. He was hired to write an article on the drop-in centre and agreed to take Vinnie along as a photographer. He was unaware Vinnie had been told not to take photos of any of the children, so included a photo of the building exterior that showed Brodie. When he discovered this had resulted in Brodie’s mother Jan turning up and causing trouble, he apologised to Shelley and gave Vinnie a telling off.

He and Shauna were thrown together again when they saved two children from a rip and he went for dinner at her house. When Leah and Vinnie arrived unexpectedly, they were invited to join them and the four got along until Gavin received a phone call from Alicia and lied that he was out with work mates. Shauna’s family and friends disapproved of the relationship and, when Gavin asked Duncan to pass on a note to Shauna saying not to ring his mobile because Alicia had it, Duncan threw it away. As a result, Alicia answered a call from Shauna and became suspicious. Gavin continued to see Shauna anyway but also kept one foot in with Alicia while he tried to get on a firm footing regarding Trisha.

Then Alicia went missing and Gavin was among a search party which found her dead at the bottom of a cliff. The police considered the circumstances suspicious and started an investigation, with both Gavin and Shauna wondering if the other was responsible. The police eventually concluded her injuries were consistent with a fall, which was confirmed when Duncan admitted he’d witnessed her fall. However, Gavin had trouble rebuilding bridges with Shauna or maintaining contact with Trisha, who was being looked after by Alicia’s parents.

Gavin volunteered for the State Emergency Service, something that Alicia had previously made him give up, and was soon in action when a severe storm caused a landslide. He worked with Shauna and Gypsy to rescue Gypsy’s stalker Kristen from her car, and was then part of the team called to the Stewart house, which had been buried. They rescued Ailsa, Duncan and Jade and only then discovered Shauna had been there as well. Both Gavin and Alf were insistent on staying despite the house being deemed unsafe and eventually found Shauna. With Joel having been injured and also needing to be carried to safety, Gavin was the last one out and only then realised that his foot was trapped. As he struggled to free himself, a telegraph pole fell on the already damaged house and Gavin was killed in the resulting explosion.