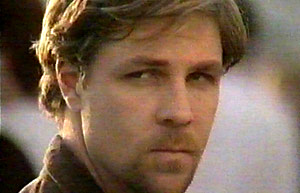 Dodge was first seen in the bay when he claimed he didn’t have enough money to pay for food from Celia’s store. She let him off but he later stole from The Diner and Bobby and attempted to steal Lance’s car. Lance caught him in the act and Dodge admitted he was broke and homeless so Lance offered him a place to stay. He continued to cause mischief though, stealing money from the school dance and pills from Phil’s bag but Celia caught him and handed him over to the cops.

He turned up a week or so later as Tom and Pippa’s latest foster child. He instantly rubs Sally up the wrong way with his arrogance and continuous flouting of the rules but he did start a friendship with Steven, helping him plot revenge on Roo’s boyfriend Simon, the person Steven believed was responsible for the fire in which his Uncle died. Part way through their plan to set Morag’s house on fire though Steven chickened out and persuaded Dodge to leave the house full of gasoline but not on fire. He was unaware though that Dodge dropped Simon’s necklace in the house. Pippa smelt gasoline on Dodge’s clothes but bought his excuse that he had stopped to help a guy with a broken down car.

Dodge continued to get into trouble despite getting the ‘family photo’ treatment and bit off more than he could chew when he got a beating of a guy he had been bullying. He continued to pull the wool over everyone’s eyes except Sally’s. Telling Tom and Pippa they were going camping, Dodge led Steven to the city where they stole a car before dumping it and heading home.

When Celia began working as a youth counsellor Dodge decided to cause trouble for her first by terrifying her and then by pretending he needed help with imaginary problems. He then turned up particularly flush the night after Alf’s store was robbed, leading Steven to get suspicious but he eventually bought Dodge’s alibi. He continued to make trouble for Sally upsetting her to the point that Milko returned before bullying her into admitting that Milko was in fact made up.

Dodge takes Steven on yet another ‘camping trip’ and once again they ended up in the city. In a youth centre they met a troubled teen called Viv Newton and Dodge convinced her to head back to the bay with them. Dodge refused to let up on Sally though, even causing her physical violence by threatening her and arousing Tom and Pippa’s suspicions. After a warning by Steven Dodge realised he needed to get Tom and Pippa back onside so offered to move out and his plan worked with Tom deciding to give him a break. A few days later he stole a car and crashed it but when he became prime suspect, Steven, scared of losing his new best friend, stood up and took the blame.

Dodge increased his bullying of Sally even going so far as to leave her drowning before eventually rescuing her and acting the hero. He then came clean about the car that Steven took the rap for and told Tom and Pippa he really wanted to change and they believed him. When his bullying of Sally nearly led him to being kicked out he teamed up with The Fletchers to throw a surprise anniversary party for Tom and Pippa and won everyone round in the process.

Just as things seemed to be getting back on track though Dodge blew it by getting drunk and confessing to Adam that he had started the fire in which Steven’s uncle had been killed. Steven chased him and went to punch him but stopped short and when Fisher turned up Dodge was arrested.

In his police interview, Dodge recounted his life story a final time to the detective – he was mistreated as a child and ran out from his family at the age of 9. However the detective was wise to this and revealed the real truth – he wasn’t Brian Knight at all (he’d had a previous encounter with the real Knight, whose background was as described), Dodge’s real name was Brian Forbes and he’d had a good upbringing from a well-off family. Everything had been a lie and he was nothing more than a brutal thug with no excuse for his actions. Furthermore, Dodge’s real father has been watching the interview via the surveillance camera and has positively identified him. He was arrested for murder and an angry Pippa burnt all his belongings.

Dodge returned in 1995 aiming to gain revenge on Steven. Michael, unbeknowing who Dodge was, checks Dodge into one of the caravans. When Pippa finds out she demands Dodge leaves, however he replies that he checked with Sergeant Hale and he is allowed to stay. Alf, another resident of the bay also gives Dodge very little welcome, before Steven finds out that Dodge has returned and demands Dodge leaves. Dodge says he’s not going anywhere.

Dodge continues to antagonise Steven leading to Steven beginning to let Dodge get to him. Dodge also gives Irene a letter from Nathan, as well as helping Jack organise a concert for the bush fire victims. Dodge then tries to frame Steven by saying that he’s hidden some illegal substances in the house and that if Steven calls the police, they’ll search the place and find them. Steven soon discovers Dodge had hidden jelly beans. Dodge continues to organise the concert along with Jack, all along using it as a way to set Steven up, by placing Don’s computer in Steven’s car. Steven was about to return the equipment, but sees Hale and Fisher talking and so Kelly and Steven decided to set Dodge up instead and place it in his caravan.

Dodge and Steven both go on the charity ferry cruise at which stage Dodge shows him Mud’s harmonica. Dodge jumps overboard and isn’t found, leading to the police start a murder enquiry with Steven as the suspect. Dodge is alive however and begins taunting Steven by playing the harmonica and then running off.

A few weeks later, Dodge returns for one final showdown. Dodge kidnaps Kelly and puts her in the boot of his car. Steven and Dodge start fighting in a national park, before rolling down to the edge of a cliff and into the sea. Whilst Steven survived, Dodge has never been seen again.