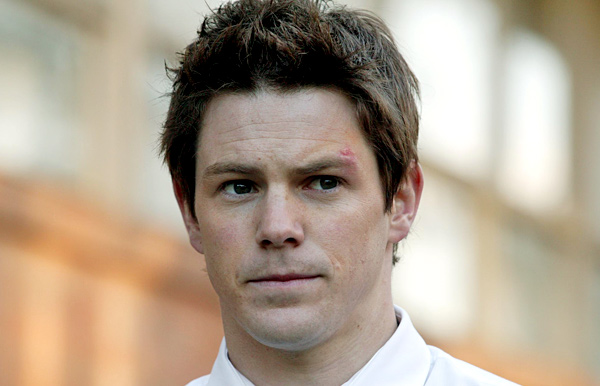 Rocco caused trouble even before he arrived in the Bay when Deputy Principal Sally Fletcher authorised him to move to Summer Bay High over the head of Principal Brad Armstrong. Brad expressed his concerns that as an ex gang member Rocco could only be trouble whereas Sally felt that everybody deserved a second chance.

On meeting Rocco it seemed that Sally was right, a shy, quiet boy with only a tattoo to suggest that he had ever been part of a gang. After impressing Brad by turning up early for school and catching up on assignments Sally overheard Rocco explaining that he is living in an abandoned shack and offered him a room in her house. Brad expressed his concerns at Sally’s decision and it seemed he may have had a point when at the end of that episode Rocco was confronted by his brother and ex gang leader Johnny.

Rocco told Johnny he wanted nothing more to do with the gang but Johnny insisted that they are brothers and Rocco cannot back out. He asked Rocco to shift some drugs and planted the drugs in Rocco’s bag just as Brad approached, leaving Rocco with no choice but to comply. Despite his protests to Sally that he is out of the gang, he sold the drugs on and met his brother in the Diner to pass on the money, commenting that Brad is getting suspicious and giving him a hard time. Later he met up with Johnny and again insisted he wanted out but Johnny refused to hear it, insisting that Rocco will help them stage a robbery and that the only way out of the gang is through death. Rocco backed down but Johnny insisted Rocco will have to prove himself so Rocco provided an alibi for his brother to prevent him being arrested for trashing Brad’s flat.

Johnny later outlined his plan to rob the Caravan Park house but Rocco managed to talk him out of it convincing him that Amanda’s place would make a better target. After the robbery Johnny suggested they lie low for a while and told Rocco to integrate himself at the Caravan Park House but after a warning from Brad, Sally refused his request to move in so Johnny took action. Leaving Rocco severely beaten, Brad found him and convinced that Rocco genuinely wanted out, Sally agreed to let him stay. Johnny continued to pile on the pressure, forcing Rocco to steal a necklace from Sally and later to deal more drugs and transfer money from the Caravan Park Account.

Rocco saved Johnny from trouble by stealing the plans for the Credit Union robbery before the Police found them. After realising that Johnny was planning further robberies Rocco turned to Ash for help and shopped his brother but unknown to him Johnny was hiding outside and heard every word. At the same time Sally became suspicious of Rocco and did some snooping of her own, eventually finding the plans that lead the Police to the real location of the robbery and she is relieved when Ash revealed that Rocco was undercover. Agreeing to see Johnny one final time Johnny reminded Rocco that they are brothers and put him in an impossible position demanding that Rocco kill Sally or Rocco would die. With no choice and in the Australian season finale, a sobbing Rocco stabbed and left Sally for dead.

After being confronted by a furious Ric and relieved that the family didn’t suspect him Rocco agreed to visit a recovering Sally in hospital and was moved when she asked him to move back in with her. On hearing of Sally’s survival though Johnny once again reiterated his threat for Rocco to finish Sally off but before he could bring himself to do so Sally started to remember and realised it was Rocco who stabbed her. After a violent confrontation with Ric, Rocco turned to Johnny who offered to help him get away and sent him to a safehouse. Later Ric visited Johnny in prison and was given Rocco’s location but on turning up at the house found Rocco badly beaten. After a few days in a coma and nearly coming round, Rocco died from his injuries.